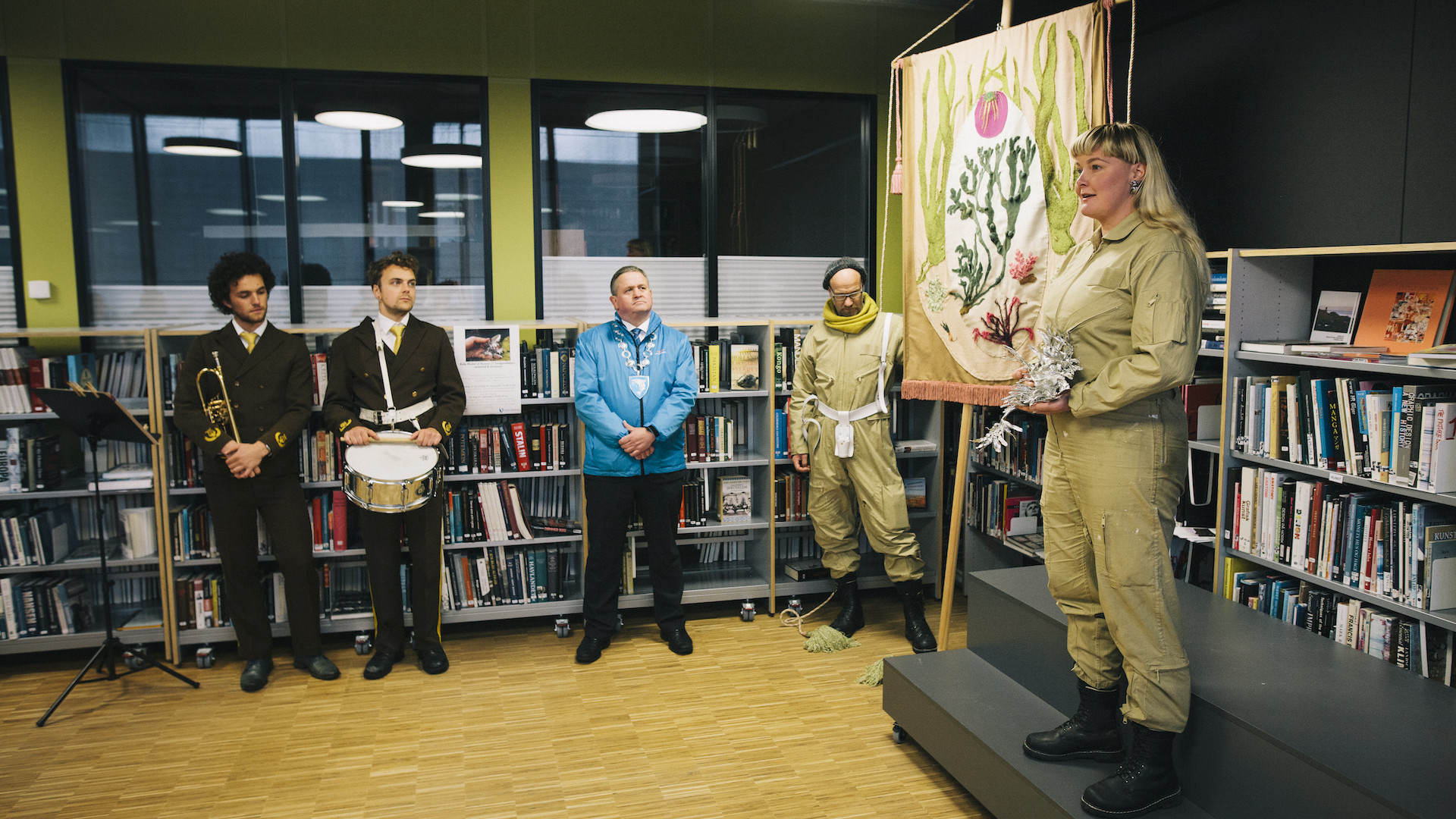 When the Lofoten Biennale opens, it is already the end of high season and the Olympian calm that reigns in the archipelago makes the idea of hordes of vans crossing it in a single file every summer sound like a fantasy. Yet, more and more year-round residents are being kicked out during the summer months by landlords who want to take advantage of this human manna1. The physical discretion of the phenomenon, which opposes the transparency to which the country gives pride of place, is matched only by its sprawling economic hold. In a hijacking of the infrastructure of the so-called sharing economy, Kateřina Šedá proposes to give a new meaning to this term by instituting an exchange of good practices, the terms of which are clearly written on the tourist caravan she has installed in the centre of Svolvær, the small city being the main base for seasonal visitors and the centre of the biennale this year. Something for Something (2019) offers anyone who wishes to reside there free of charge in exchange for an action desired by the local inhabitants. Helping load a family’s moving van, cleaning up a house for someone who can no longer really take care of it, or baking cakes for community elders: all these requests have been honoured by people passing through, allowing, beyond the exchange of services, meetings that would probably never have taken place otherwise.

While the history of the settlement of the Lofoten Islands is made up of seasonal migrations2 starting with that of the cod that spawn there each year, João Pedro Vale & Nuno Alexandre Ferreira have chosen to put it in perspective with a more global history by opening a collaborative kitchen within the main exhibition space, a kitchen centred around one of Portugal’s emblematic dishes usually made with cod imported from Norway and, for the occasion, here re-imported onto its original lands. Semiotica do Bacalhau / Semiotics of the Cod (2019) is an opportunity for them to share with their guests the dark sides of these ancestral trade relations with forceful anecdotes, such as the reminder that the word Bacalhau also named the whip with which Brazilian slaves were abused. Close to the large tables on which the Bacalhau à Braz was served, benches are available to listen to conversations by Signe Lidén (The Tidal Sense, 2019) with Grace Dillon, an Indigenous Futurism specialist, but also with a biologist-media theorist and a neurologist specialized in music. We hear about vibrations and membranes—“a cell is full of membranes, everything is membrane-based”—, biological rhythm—“not twenty-four hours long but variable, like the tide”—and incessant movements—the Anishinaabe, the indigenous people of the United States/Canada border region from which Dillon originates, “have an eighty percent language composed of verbs, they describe the movements of the world and our relationships to them”. In the heart of such a fascinating landscape, in a building with large windows that constantly attract the eye on the outside, it is difficult for the art to hold the competition on a purely visual level. Many works are thus calls to experience the moment as much as to abstract from it in a contemplative introspection, and vice versa. Completing her collection of conversations about the state of the sky collected on a zooplankton scientific observation vessel (Small Talk #4, Everything Weather, 2019) with a sort of lifeguard chair placed in front of one of the high windows of the decrepit building, Michaela Casková offers everyone a time to observe time, and what to note it. These precisely annotated observations (exact date and time of beginning and end), for which we take turns, form not only an attempt at exhausting a place in the Perec style but also a protean novel, each complementing it with his own talents.

If climate change forms the basis of some of the works, it is never from a catastrophist point of view but rather from a melodramatic and humorous angle—as in Trygve Luktvasslimo’s excellent medium-length film, Shallow Water Blackout (2019), whose characters embody the different archetypal facets of it—, or erotic­—as in the films by Anne Duk Hee Jordan, who chooses to present colourful and sensual aquatic reproduction scenes, but also interviews with marine biologists about animal gender fluidity and in particular the female future of certain sea creatures at the end of their life. Feminineness is traditionally associated with certain qualities such as softness, moistness, viscosity, qualities rarely appreciated and even less emphasized. In contrast to the tradition of disdain for these attributes, Signe Johannessen chose to pay tribute to what saved one of her family members during the Nazi attacks on villages on Norway’s northern coast, when buildings and residents were set on fire. Her ancestor took refuge in the water under a cluster of kelp for several days, which allowed him to survive the attack. Moulding various algae and shells that live there in tin, with the collaboration of the passers-by in the main square, she created The Kelp Medal of Honour, which she presented to the mayor of Svolvær during a moving ceremony that was preceded by a march in the city with musicians playing pieces written by Signe Johannessen for the occasion. The mayor’s acceptance speech quickly changed the tone of the scene, quick as he was to thank the kelp for all the wealth it would bring to the region thanks to its growing exploitation by the start-ups that are setting up there.

1 The gentrification of the archipelago is obviously a recurring concern of the curators, and particularly those of the 2015 LIAF, which I reviewed in issue 76 of 02 (Winter 2015-16).

2 I mentioned the origin of the settlement of the inhabitants of the archipelago in my review of the 2017 LIAF published in issue 83 (Autumn 2017).