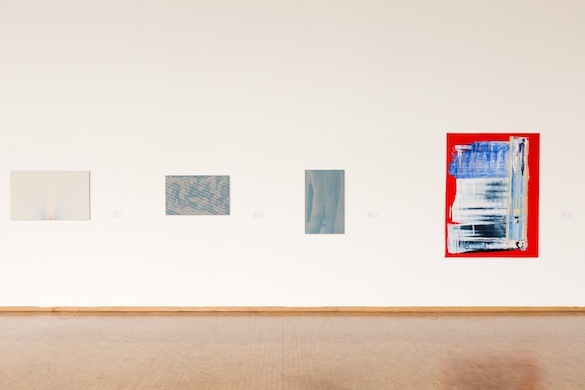 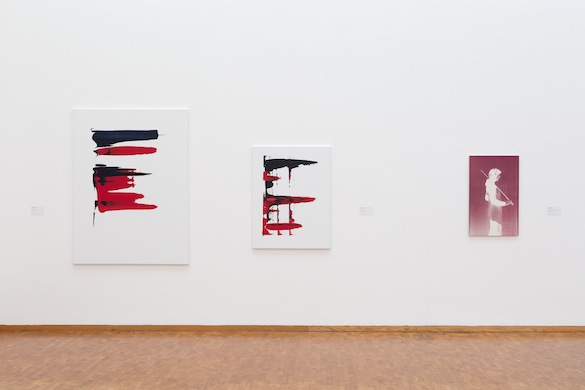 It was under the mouth-watering title of “The Impossibility of Painting” that the discussion which brought Michael Krebber and R. H. Quaytman together1 — both winners of the Wolfgang Hahn Prize2 this year — along with Daniel Birnbaum, Yilmaz Dziewior, new director of the Museum Ludwig, and the critic Kerstin Stakemeier, was held on 14 April last. Given the productivity of the two artists, one’s initial reflex would be to question the validity of such a declaration. But there are two terms to be taken into account here—‘impossibility’ and ‘painting’, ergo—which, merely by being considered separately, might easily give rise to lengthy and digressive analyses, and then be linked together by a little conjunction… 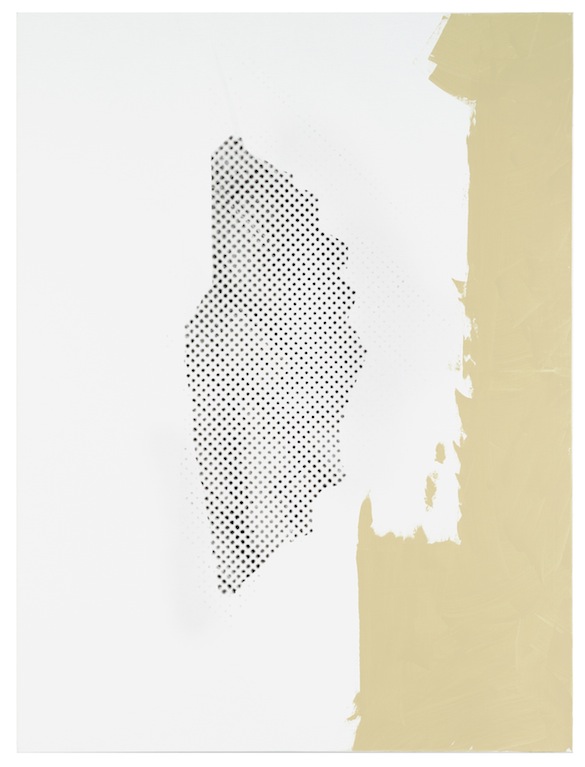 It is amusing to note that at the beginning of their respective careers, each artist had a tendency to eye the other’s artistic “circles”: in the early1980s, New York, for Krebber, was the aim, while, a few years later, it was in Cologne, or so it seemed to Quaytman, that the real debate about painting was happening. It has to be said that claiming to be an abstract painter interested in matters of perspective in the early 1990s in New York was perhaps not the most obvious stance to adopt. This, to borrow the artist’s own words, even had “something of an I’d prefer not to3” about it. So perhaps the impossibility above-mentioned, seen in this context of each artist’s beginnings, refers to the impossibility of a “pure” painting, a strictly self-centered painting, a painting which would have only talked about painting? For if there is indeed a shared point that can easily be established in the work of these two artists, it is that of an extreme contextualization of their painting. In a different sense for each one of them needless to add. As far as Krebber is concerned, this contextualization should possibly be understood more as a porousness, so many times has he managed to demonstrate not only his interest in presenting art and non-art simultaneously, but also the environs of art, by way of this regular presentation of non-art. And if, for him, “a stretcher frame makes painting painting, more than the application of paint to rough or smooth surfaces”4, R. H. Quaytman, for her part, found “in painting a place in which to apply ideas coming from other milieus”, because, for her, paint (as a medium, therefore, and not “what the paiting is made with”) is the real medium.5 In a reverse movement involving Krebber’s deliberate fickleness, as he endlessly re-invents his work in order to sidestep any kind of stylistic pigeonholing, and thereby tries to assert as few things as possible, Quaytman produces an all-encompassing line of thinking about her work, a way of resisting the physical dispersal of this body of work—through exhibitions and acquisitions—which may also be interpreted as a possibly more political resistance to the trans-substantiation of a work (individual, this time) as an art object. It is in the form of what she calls a “book” that she has elected to unify her output since 2001, organizing her solo shows as so many “chapters”. Yet she refrains from all manner of systematism, preferring the word “method” to that term, and thus more readily introducing the idea of an open reading of the œuvre, whereas a system would tend to lock it in. The fact of linking each new chapter to the exhibition for which its elements have been produced makes it possible to pinpoint the issue of the context of painting, but without this latter becoming immutable—each picture can be shown at a later stage outside the chapter it has come from—: it is a matter of “acknowledging that they are objects that are changed by their location, and by adjacencies”.6 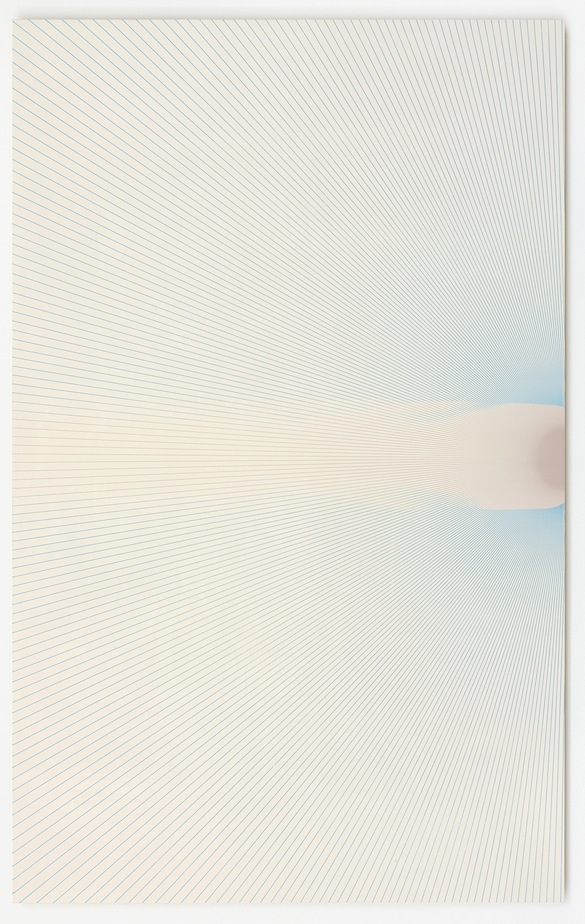 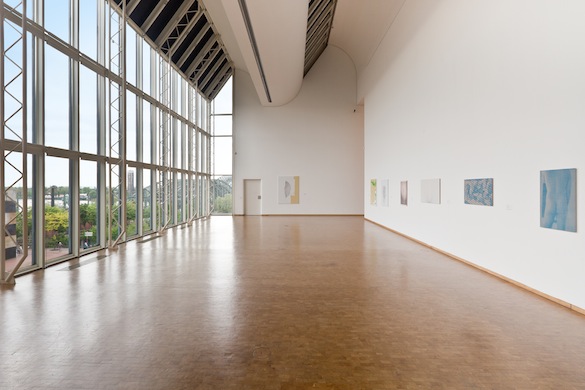 The hanging at the Museum Ludwig is the work of both artists—it would be fairer to say that it was Krebber’s doing, which was then altered by Quaytman, for purely practical reasons—and offers a perfect illustration of this afore-mentioned idea: Krebber produced a hanging which Quaytman interpreted as thoroughly controlling the reading of the show, which was in fact nothing less than a regular punctuation of the walls of that room, whose fourth wall is a huge bay window giving onto the city. So she simply placed horizontally the central picture which Krebber had hung vertically, thus opening it to all the paintings around it and, from her point of view, making it possible to have a peripheral vision of the exhibition. A peripheral vision that can, of course, be extended to the city of Cologne, which therefore faces the main wall, with ghosts of Gerhard Richter and Sigmar Polke obviously appearing in the works of Krebber and Quatman on view here. If the former have actually deconstructed printing techniques in their painting, Krebber takes up the (printing dots) motif in this new series of canvases, while Quaytman makes emphatic use of silkscreening at the heart of her painting, like a bonding agent between gesso and pigments. 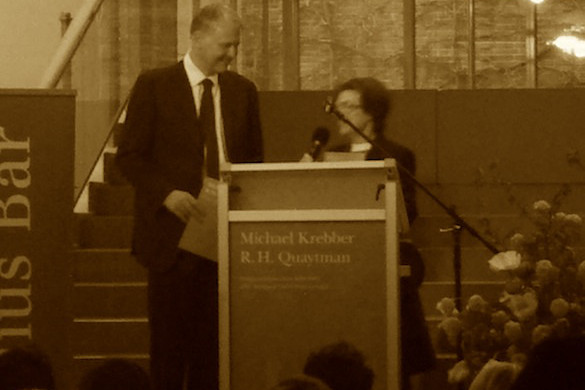 RH Quaytman and M. Krebber’s talk on the occasion of the prize award ceremony.

1 This is not the first time that a connection is being made between the two artists. We have already seen their works rubbing shoulders in the exhibition “Gambaroff, Krebber, Quaytman, Rayne” at the Bergen Kunsthall, from 5 November to 22 December 2010. Krebber also took part in Quaytman’s piece To the German Language – Dia, shown at the Dia Art Foundation on 20 December 2011 and at the Buchholz gallery from 7 July to 25 August 2012.

2 Initiated in 1994, the Wolfgang Hahn Prize, named after the late Cologne collector, is budgeted with up to 100,000 € and annually awarded to artists who have proven “consistent development of artistic creation over a period spanning decades” and enjoy international recognition among experts, but whose work is not yet adequately represented in the museum. Previous laureates include Kerry James Marshall (2014), Andrea Fraser (2013), Peter Fischli and David Weiss (2010), Christopher Wool (2009), and Peter Doig (2008).

3 Quotation taken from the above-mentioned discussion. All the subsequent quotations in inverted commas which are not referred to in notes are taken from this same discussion.

5 “The medium is painting, not what the painting is made with. It used to be thought that the blank canvas was already a monochrome—now it is the choice itself, whether painting or not, that functions like the medium”. R. H. Quaytman, Spine, Sternberg Press, 2011.