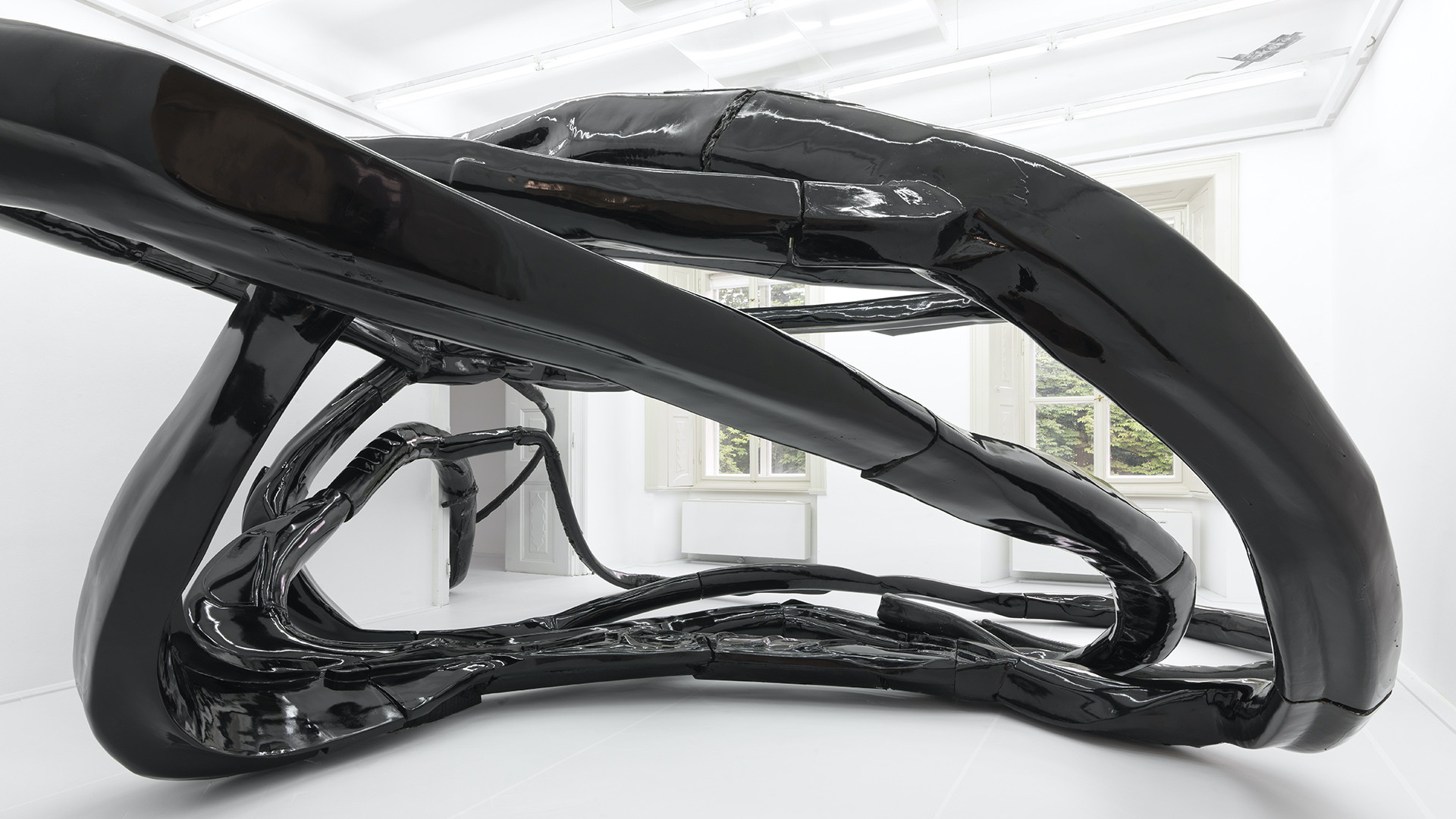 I must admit, although this is obviously not the first time I have visited an exhibition remotely, it is the first time I’m going to report on one in this situation, and, thus, add an extra layer of mediation to its already mediated appreciation. Ironically, it was an exhibition whose subject matter and implementation were perfectly suited to the situation and therefore, at a time when the art world was clumsily taking over the digital tools as if net art had never existed, I was invited to a humble video tour of Andrej Škufca’s solo show at the International Center of Graphic Arts (MGLC) in Ljubljana.

While we were just beginning to open up perspectives in the thinking underlying his work (the animality of the machine, design as software, the sprawling market forces trying to cover the smallest part of the known universe…), the artist suddenly blurted out: “the sculptures are not there for humans, when humans interact with them, it’s a sort of second layer”.

So, obviously, it was funny when the curator, Àngels Miralda, elaborated on her personal experience of the project, explaining that she had ultimately curated the exhibition through video calls and had not yet visited it herself.1 Then the artist added that, of course, he too had been denied access to the exhibition space during the setting period which was unexpectedly interrupted by the spread of the virus that we know.

However, their idea to post teasers of the exhibition on YouTube was not a consequence of this misfortune, but rather the desire to expand the catalog in other forms, for theory holds as important a place as physicality in the work of the young Slovenian.

A relatively simplistic reading of Black Market would no doubt see in the long, obscure tubular forms winding their way through the exhibition space an infrastructural-superstructural fusion, so easy is the analogy with submarine cables and pipelines that underlie nothing less than the globalized way of life. But that would be to stop short at those surfaces that one cannot help but want to touch. That’s because the sculptures are covered with all sorts of polymers embellished with a layer of ballistic gel, a material designed to reproduce the characteristics of human flesh and used both to analyze the impact of ammunition on the body and for industrial crash tests. So yes, it’s gelled, it’s shiny and it’s soft. It smells strong too, it seems, and that’s what I missed the most on this visit, which could make me fancy using the word “virtual”, for once. It almost smells through the screen, so much the sinuous presence imposes itself in the extremely whitened space, as if artificially brightened—well, I mean digitally, since white paint is an artifice too. The effect of a 3D space in which human presence would only be tolerated, dominates. So, seeing some moving beings, masked and wearing overshoes, obviously only amplifies the feeling of peeking unauthorized in some secret laboratory.

If the idea of an infrastructural-superstructural fusion seems to refer to Marxism on acid, it is perhaps to better convey the idea, dear to Mark Fisher, of the plasticity of these structures.2 Confronting the immutability of capitalist realism with a spiritual plasticity probably required placing mineral oil, the mother of all plastics, at the center of both the reflection and the exhibition space.

The key to the massive expansion of capital was the discovery of a force of life in dead matter, or life in the remainders of life: namely, in coal and petroleum. Living fuel (human labor) was exponentially supplemented and often replaced by dead fuel (the carbon remainders of previously alive entities) even as the ethical problems of extracting life from life has been mitigated. Capitalism is an enormous smelter, shoveling into its furnace the living and the dead.3

Bodied like cars but at the same time evoking what is now known as “the longest animal in the world”,4 Škufca’s sculptures are partially inspired by the thinking of Keller Easterling, an architect who treats space as an information system5 and, for the first time, their modules are presented as a single piece, linked by the smoothness of shiny synthetic skin.

Capitalism sees all things as having the potential to create profit; that is, nothing is inherently inert, everything is vital from the point of view of capitalization […] like the Virus that takes advantage but is not ultimately wedded to the difference between Life and Nonlife, Capital views all modes of existence as if they were vital and demands that not all modes of existence are the same from the point of view of extraction of value.6

Though the essay by critical theorist and anthropologist Elizabeth Povinelli from which these last two quotes are taken is from 2016 and totally unrelated to Škufca’s work, I couldn’t have written better with regards to Black Market.

1 Happy ending: she managed to see it in person just before the show was dismantled.