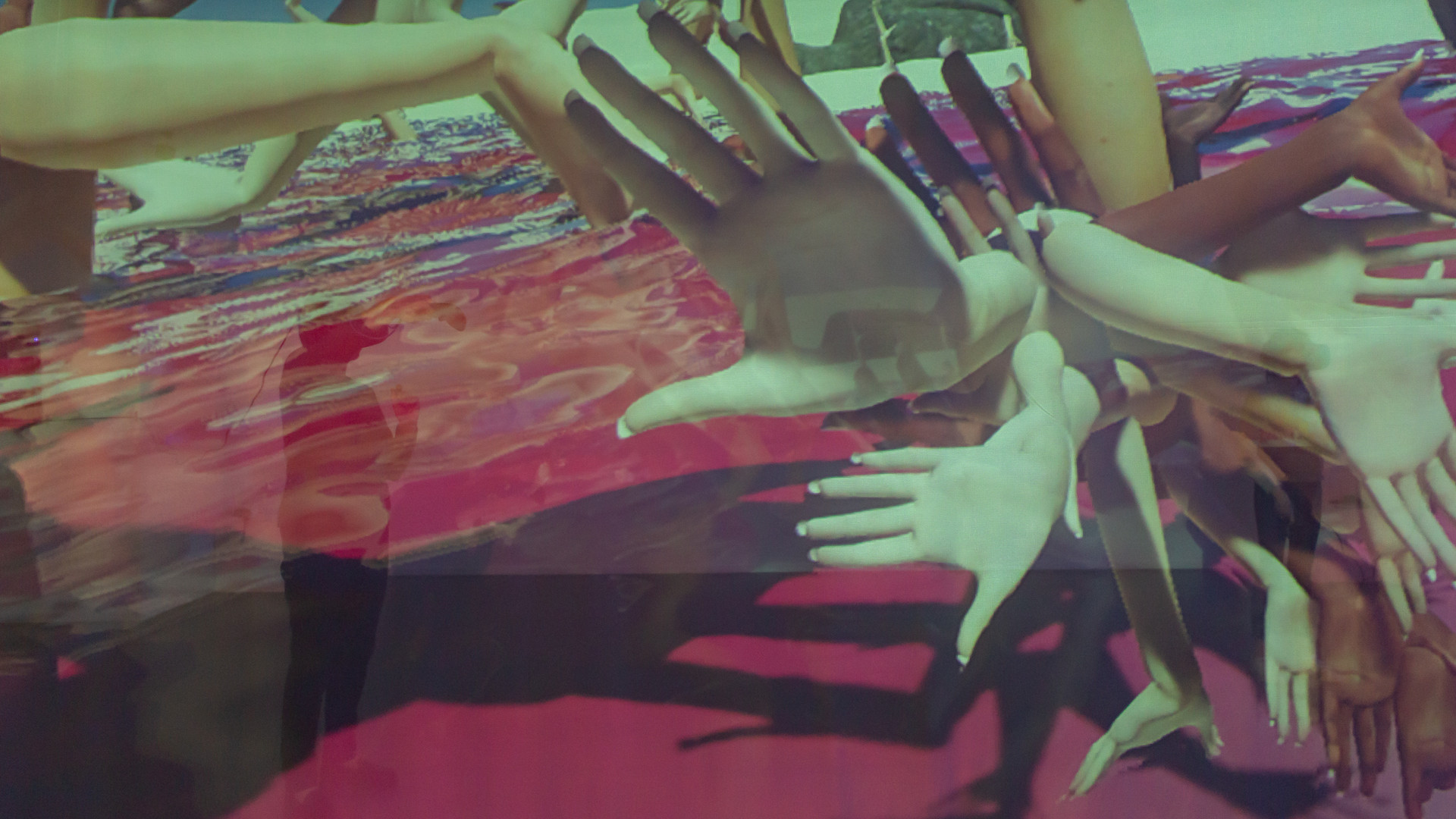 I unfurl my hand like the disembodied ones in HanaHana: Full Bloom, Mélodie Mousset’s virtual reality piece and the heart of the exhibition. This floral movement is beautiful and unsettling, both natural and unnatural. Mousset’s otherworldly hands sprout in alien spirals out of the sand and sea. With repetitive movement, each hand emerges from the previous, creating an echo of the aestheticized and manicured appendages.

HanaHana displays these fragmented humanoid forms as they point toward an inhuman, posthuman or even an über-human world. Her landscape bypasses human problems of politics and immigration to go beyond, toward a sci-fi realist, though aestheticized, apocalyptic crisis: a posthuman existence where humanoid ligaments have become a part of the natural landscape.

With a gallery aide as my guide, I was directed toward several features of the game. As the player, you can go underwater, climb the spiraling hand-vines up through the sky or explore ancient ruin-like structures and caves.

HanaHana is a serene post-apocalyptic posthuman landscape. There are no humans, only fragments and echoes, both animate and inanimate; without a central nervous system, the hands are only capable of one response as they are acted upon by the user: to reproduce infinitely, climbing one another to the reaches and depths of the gamic space.

Hana means “flower” in Japanese, but hana (with the suffix -su) also means “to speak” and Hana-shi translates to “story”. The exhibition is a peeling, or an unfurling of a story with branches off of arterial motifs, as is highlighted by her neon sculpture HanaHana (Branch) of hands that light up the far wall of the exhibition in fluorescent blues and reds.

Accompanying literature reveals that Mousset’s mother struggles with a hereditary form of schizophrenia. Accordingly, the message of healing the ailing mind and body becomes personalized in the context of the artist’s film and other pieces in the exhibition. The film Intra Aura tells the story of Mousset’s search for a cure for the mind through the body and the spirit.

Her journey follows after that of the schizophrenic playwright Antonin Artaud, as Chris Kraus points out in her review of Organic Voyage (an earlier version of Intra Aura): “Mousset’s Voyagekind of mirrors Antonin Artaud’s famous journey […] but in reverse. He was seeking a body without organs; she was trying to externalise her own organs without a body to contain them.”[1] Her most marked approach of externalization is through echo and replication.

HanaHana, the title of the VR piece, is an echo itself as it interplays with Intra Aura in showcasing the artist’s desire to replicate parts of the human body. Mousset takes her inspiration from popular anime One Piece in which heroin Nico Robin ingests the “devil fruit” (also called hanahana in the original Japanese), allowing her to replicate her own body parts.

Likewise, Mousset casts her body like a spell into her pieces, replicating to uncanny heights. She casts her vital organs into wax models, marble, bronze, and even fruit. One poignant scene in the film depicts her wandering a Mexican produce market searching for fruits and vegetables which mirror the wax casts she has brought of her vital organs. The end of the section shows Mousset cradling her harvest of organs rendered in produce. The scene echoes the exhibition title, “L’épluchée”, to peel a fruit, say, or skin.

In the corner of the space is Bare Ripple, a blanket of skin left in a pile on the floor loosely draping a humanoid form like a shroud. Here lies the peel, and there, the rest: the inward and universal journey toward psychic wholeness and reconciliation. “L’épluchée” reads like arteries with veins following and exploring digressions from the main arterial, halting here or there, as if to say, no, this is not it. The hands in HanaHana reach out in spiraling vectors, grasping, until the player releases the action. Intra Aura is punctuated by mishaps, barriers and false starts. “L’épluchée” is a schizoid path marked by sputtering stops and starts, diversions and departures.