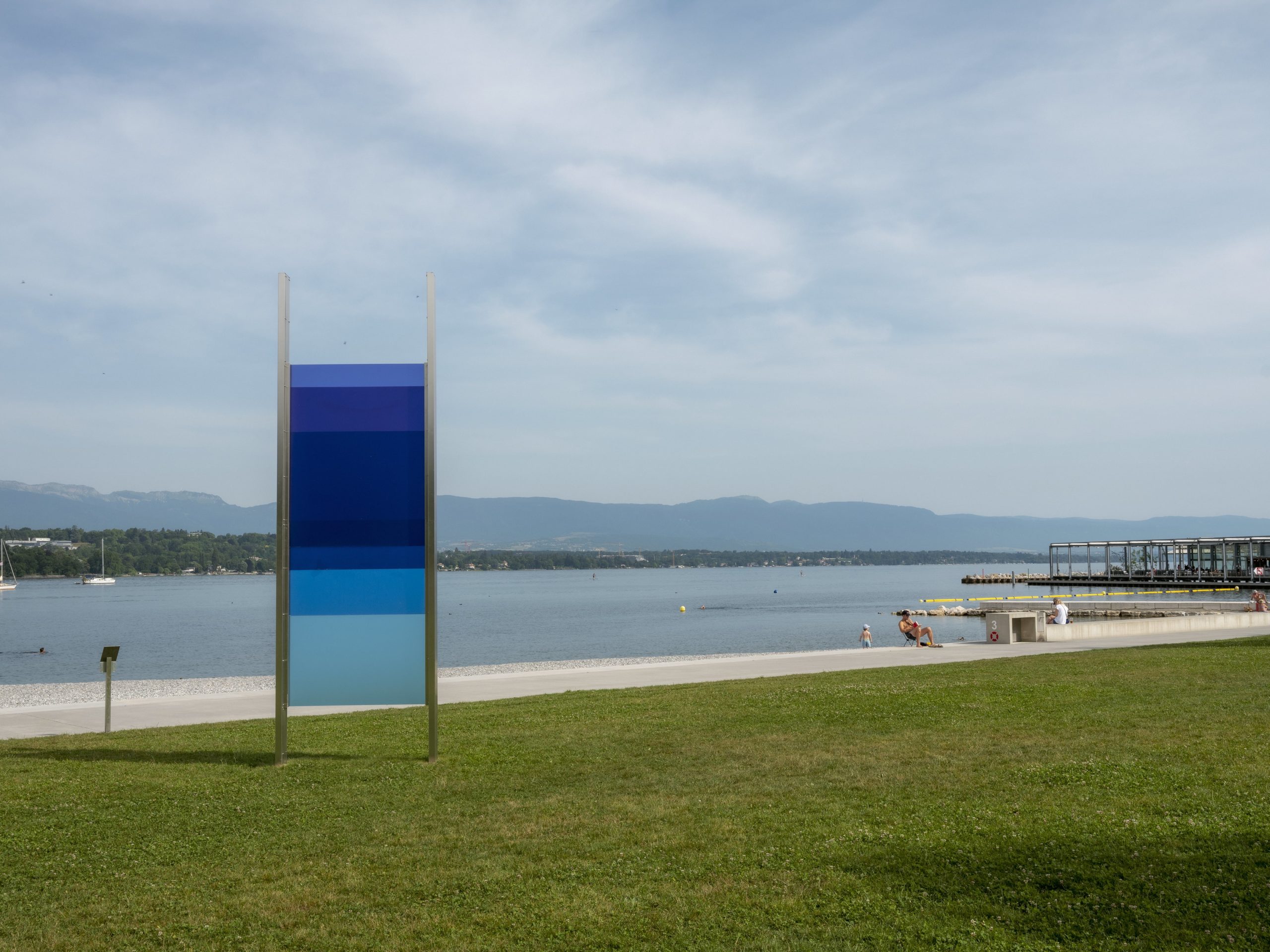 As Lionel Bovier (director of the Mamco, Museum of Contemporary Art, Geneva; also a partner for this third edition of “Sculpture Garden”) pointed out, contemporary art in the outdoors has a long history—from Arnhem in 1949 to New York’s recently built High Line. As Bovier also stated, the objective of this type of event is to maintain, not only a high quality in the artworks shown—seemingly a given—but also to establish contact with the type of public which frequents these types of places, which are generally dedicated to something entirely different from art; while also attempting to diffuse a host of works which resonate with the aesthetic and societal preoccupations of the curator. Another of the many difficulties which must be overcome when it comes to an event of this sort is the fact that the works included will need to hold up under outdoor conditions. For some artists—whose work is mainly conceived and produced for asepticised indoor environments, devoid of the risk of deterioration or damage from inclement weather or “visitors”—this means that their practice must be adapted. Yet another ingredient to take into consideration in order to achieve a certain measure of success is that the works must be able to “exist” in an imposing environment. In the case of the park, which has been designed to have an aesthetically sophisticated relationship with nature; it is a place where rare plant species, remarkable trees and grasses combine to form something like a living artwork. Here, grass grows and flowers bloom, rain can impose itself to an invasive degree, a turtle can come along and interrupt the stillness of a pond, as can the flight of a crow over a grassy monochrome; the competition is tough.

The strategy to adopt is simple: choose good artists. Not necessarily ones that are accustomed to working in the outdoors, but simply artists who are capable of responding to the exigencies listed above. Several tactics are at work in this edition of the biennale. The first is to break with the idea of harmony that was prevalent in the planning of the park. In terms of attention-grabbing, this is certainly the most successful one. The duo formed by Jos de Gruyter and Harald Thys scores high points when it comes to this little game: their work, A.M.M.S.A.303, immediately takes hold of you upon entering the garden. It holds court in the middle of the lawn, in line with the Eaux-Vives restaurant; metallic minimalism breaking radically with the curving paths and large-canopied trees surrounding it. This version of Soldats (Soldiers)—a work they adapt regularly—integrates the logo of Ethereum, a type of crypto-currency, present in the form of the faces of the figures, as well as stroboscopic lights—made by Boeing and originally designed to give the real time position of aircraft—that sit atop the silhouettes of the sentinels. The work is a clear nod toward a country that certain people seem to consider to be a massive safe. In a similar vein, Nina Beier’s lions (Guardians) set up a double semantic displacement by reminding us of what occurs when sculptures of exotic animals are placed here and there inside these types of parks. However, the multicoloured replicas are grouped in such a disorganised manner, with the vaguely utilitarian usage of a soap dish, that their customarily decorative role is thrown off-kilter. Ana Alens’s fountain (Liquid Agreements) and Elif Erkan’s “menhirs” (Where You They form) also break form with sculptural conventions, one by attempting to create regularity through design out of the loose stones that the park aesthetic tends to absorb, the other by leaving behind all attempts at grace and elegance, by exposing the inner workings, tubes and structures on which a fountain is built.

The other major tendency here is that of fusion, which tends to adhere to standards of classical garden sculpture, with Diana the huntress surrounded by her water nymphs and false fountains, with the addition of rocks to elevate the representation of objective nature modeled after the idealised vision of the owner. Lucy Mackenzie’s work is pitch perfect in the way that it updates the canon of beauty to reflect current tendencies; one which since antiquity has been mostly determined by male sculptors. Pushing this reification of female forms to its limits, the artist gives this modern Daphne the airs of a department store mannequin. These idealised forms respond to a consumerist imperative which the contemporary woman is expected to identify with, and from which men are supposed to draw satisfaction from (Anonymous Statue). While this work from the Scottish artist possesses a grating quality, through deliberate dissent, others use a more “homeopathic” approach. For example, Koenraad Dedobbeleer’s work is a wrought iron door in the form of an ampersand which separates two spaces in the garden; Céline Condorelli’s retaining structure for a tree is repurposed into a dog park feature/sculpture in a section of the park where canines can run free. A reference to Donna Haraway and the idea of companion species, the sculpture counteracts the idea of a gulf which supposedly separates different tree and plant species. Aside from the reflexive effect the work of Sammy Baloji produces, there seems to be an effort to create a miniature park, which ends up being a reflection on the provenance of plant species which populate parks in the Western world and the effect that these multiple uprootings and importations have on the ecosystems these plants originate from (…and those North Sea waves whispering sunken stories).

How to name and comment on a selection of works that all resonate with the idea of the garden, of its multiple meanings and historical representations, some which choose to upset this order, others to test its limits? Some comment on societal issues, or rather, on the aftereffects of a context that has had an enormous impact on modern life in recent years. The curator seems to have opted to transcend this context, alluding to a more joyous future, one where conviviality might be restored—which is a shared objective with city parks in general. The work of Suzanna Csebatul responds to this in a playful and spectacular way, Bojan Sarjevic’s work integrates itself directly into the party planning committee. Liz Deschenes takes things off the beaten track with Blue Moon Scale, which does its best to question the lakeside landscape, as if it has been submitted to the same light-induced damage as a work in a museum.