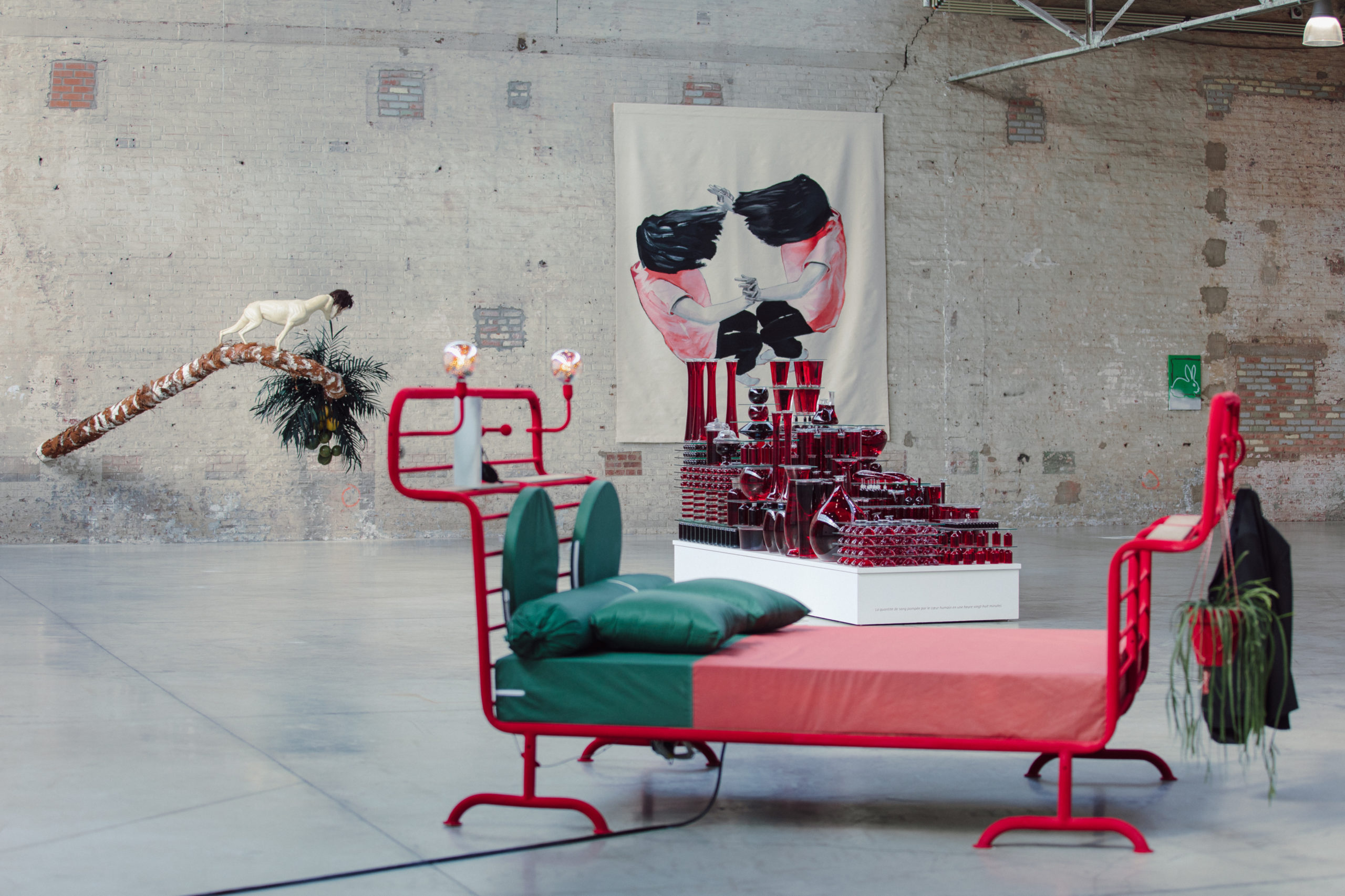 Thought of as a loosely inspired re-reading of Ludd’s Anger,1 BPS22’s exhibition of the same name offers a panorama of artistic stances and positions with regard to contemporary alienation. The revival of Luddism, luckily far well removed from the technophobic considerations previously inflicted on (neo-)Luddites, is a pretext for the eclectic and a tad too plentiful assemblage of artworks—most of them by women—acquired over the past five years by the BPS22 art museum. If we go beyond the different forms of dispossession (sexual, linguistic, of the self, etc.) which structure the exhibition and underpin the still raging topicality of the challenges of this workers’ struggle, what can we learn from the mythical construct of a collective body of resistance, in present-day circumstances? Behind the flagrant absence of any unifying figure, real or imaginary, like that of General Ludd, how does one fashion the narrative of an insurrection? Is it possible to believe in one or more forms of liberation?

The show starts with an impressive composition by Jacques Charlier which calls to mind exotic clichés of colonialism, and with a pair of large, colourful curtains made by Ulla Von Brandenburg. The two artworks form a theatrical passage leading to the main room, and seem to establish the backbone of the narrative into which we make our way. Thus set up, the backdrop of the exhibition reveals several bodies, including a ready-to-fight figure with reddish fists by Miriam Cahn. The pale figure floats like a mirage over a bright background, which releases the warmth of a physical experience. We can guess this is the outcome of a fit of anger directed at oneself or at someone else. This phenomenon evokes the issue of otherness, a central subject in the show, which is also present in Charlotte Baudry’s tapestry on view not far away. With this work, the artist subverts the illusions usually offered by painting, while the title, Réfractaires [Defaulters], grapples with the idea of vulnerability introduced by the representation of falling bodies depicted in the tapestry. As if escorted by strange creatures whose slightly fortuitous presence is troubling, —such as Camila Oliveira Fairclough’s rabbit painted green and Naufus Ramirez-Figueroa’s sculptural half-dog and half-executioner hydra—, Baudry’s two young girls sway in a state of weightlessness. From the precarity with regard both to oneself and to the world, emerges the conspicuous difficulty with being “as one”.

Far removed from the colourful fireworks of the main hall, the first video by the photographer Laura Henno presents a night-time documentary whose simplicity transcends the tragedy of migratory issues. The gaze of the child smuggler reveals both the apprehension and the courage involved in taking the helm and steering the boat, in order to bypass the administrative boundaries of the Comoro Islands. The faces are drawn in chiaroscuro by the light of a torch. The jolted bodies remind us of the uncertainties of these beings, whose resistance starts in the shadows. Like a reverse angle shot of this risk-taking, Marcos Avila Forero’s engraved palette illustrates the armed struggles of Colombian men, thus calling to mind the individual responsibilities at stake with these pledges.

In Tourisme international, Marie Voignier gets rid of the voices of the video she made during her visit to North Korea. The sounds of flashes and click-clacking heels reflect the ‘apparatus’ of a soulless system and the collective and painstakingly choreographed aphasia of a dispossessed people. While exposed to all kinds of exploitative rulings and to dictatorship, insurrection takes place through a necessary infiltration of technology. In Emmanuel Van Der Auwera’s work, —which hijacks the offset printing technique on aluminium in order to unveil mediatized depictions of the crowd—, the image of the bodies merges into a single mass upon which weighs the ubiquitous eye of surveillance. The feeling of powerlessness in the face of the machine goes hand-in-hand with the feeling of dissolution of identity for which only the belonging to a community of many voices can be a source of resistance. While uncovering the oriental origins of the Fables, Katia Kameli sheds light on the possibilities of a decompartmentalized understanding of the world through the extension of sources and origins. A final space (which recalls much more the historical context of the province of Hainaut, where the BPS22 museum is located), reveals itself behind Latifa Echakhch’s imposing curtain. The blast furnace depicted on the disjointed canvas refers to a collapsed modernity that has not managed to keep its promises.2 From one story to the next, the industrialization against which the Luddites rose up calls to mind the initial gallops of progress. Borderless, it is this very same industrialization that turned Charleroi into the flagship of iron and steel industries, before finding itself completely abandoned, as Teresa Margolles’s block points out in reaction.

In search of the “positive dispossession” seemingly promised by the exhibition, it is finally with Maxidodo by Florence Dorléac & Maximum that the breakout begins. The design of the big red bed with green sheets, made with Vauban barriers, transgresses norms and wittily hijacks and subverts the nature of the object. Closely surrounded by Priscilla Beccari’s surrealist drawing and Anne-Marie Schneider’s frieze of childlike characters, —which scroll past like end credits made up of absurd images—, the Maxidodo offers a last refuge in imagination, against the acceleration of contemporary life.