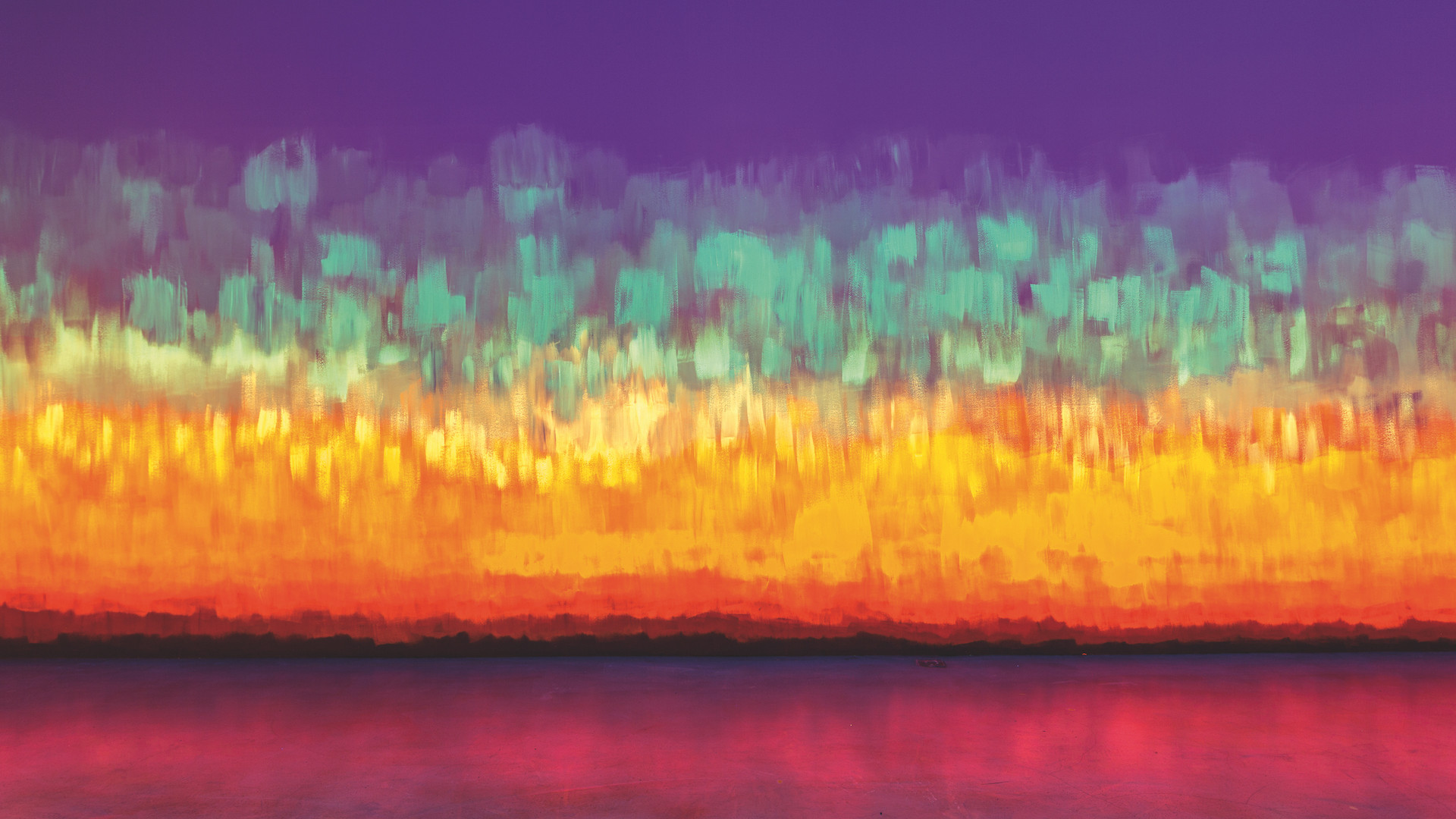 All the World’s Painting

The scene is still fascinating: somewhere in the depths of a dank and rustling cave, coming to life in the glow of a torch or a camp fire, liquefied pigments are projected by a warm blast of air on walls whose irregularities are taken into account to animate a hunting scene or an animal body. By accepting the anachronism and uncertainty which hover over the nature and function of these mural depictions, might we—albeit out of fantasy—conjure up the hypothesis of the beginnings of a site-specific pictorial practice, whether it be dedicated to a magical ceremony or to a celebration of everyday life? Or perhaps, on the contrary, we might reveal in Flora Moscovici’s site-specific praxis a certain form of primitivism? But this latter has probably been digested by the history of western painting and in it the figure has been abandoned, in favour, solely, of colour. A colour which, unlike Palaeolithic signs and motifs disappearing in the darkness once the flame has gone out, is trying to produce its own radiance. 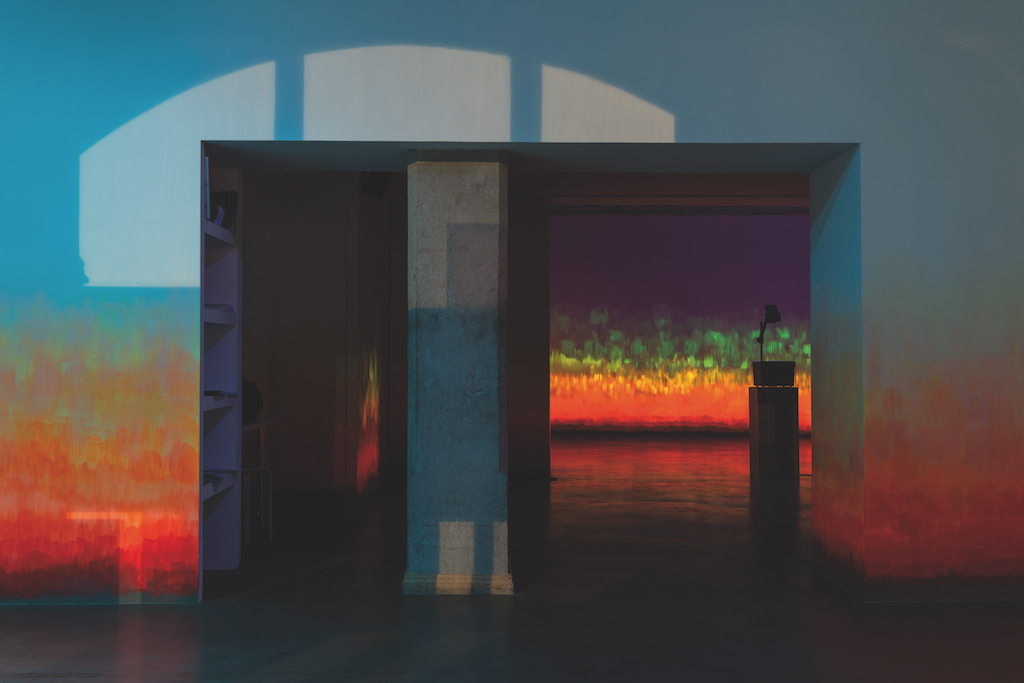 The BF15 in Lyon has nothing cave-like about it. Fitted with large windows giving onto the street, and a glass roof covering an old courtyard, this contemporary art venue basks in natural light. Flora Moscovici and Meris Angioletti, who had not worked together hitherto, have started out from this contextual datum in order to think as two voices, in the manner of a conversation, about the exhibition “Adagio” produced as part of the Suite programme initiated by the CNAP.1 Preferring a light produced by and for the works to the stable and neutral light of neons, they propose a selection of pieces which sketch a mixed and moving territory, affected by the light variations passing through the BF 15 based on the weather and the time of day, but which are also capable, once night has fallen, of keeping a form of “energetic” autonomy. So, in particular, Meris Angioletti installs on the windows a coloured score whose projection on the floor, as the result of an interplay of transparency, is forever developing in relation to the amount of sunlight, and multiplying the interactions with the architecture and Flora Moscovici’s pictorial intervention which spreads like a fire in both the exhibition space and on the façade of the BF 15. 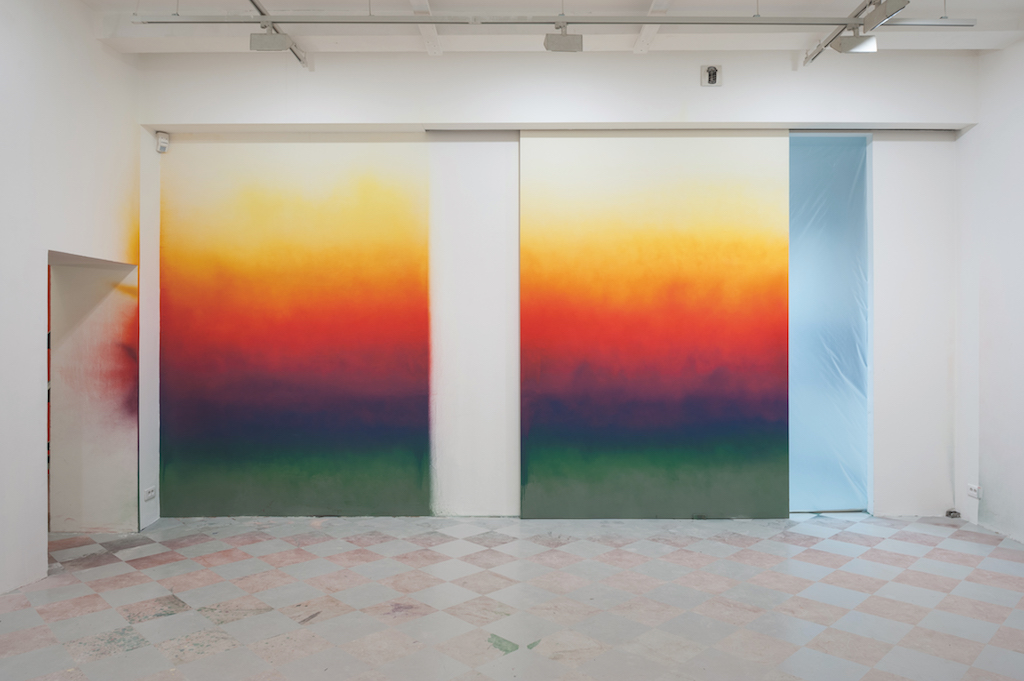 She repeats one and the same gesture there which, while it never produces exactly the same thing, introduces an overall coherence: reddish touches starting from the floor become gradually fainter in an overlay of fluorescent tones, then pale yellow, whose intensity conjures up a fire, or a sunset or sunrise. In the evening, when the BF 15 closes, in the room at the back which can still be seen from the street, the overhead projection of a text coming from a lecture given by Meris Angioletti gives way to a black light which reveals in Flora Moscovici’s work, thanks to the use of fluorescent paints, new effects of incandescence and highlights. In this installation, the paint reflects, as if the light were coming from the floor or the wall, and displays an almost organic character, with powerful vibrations. 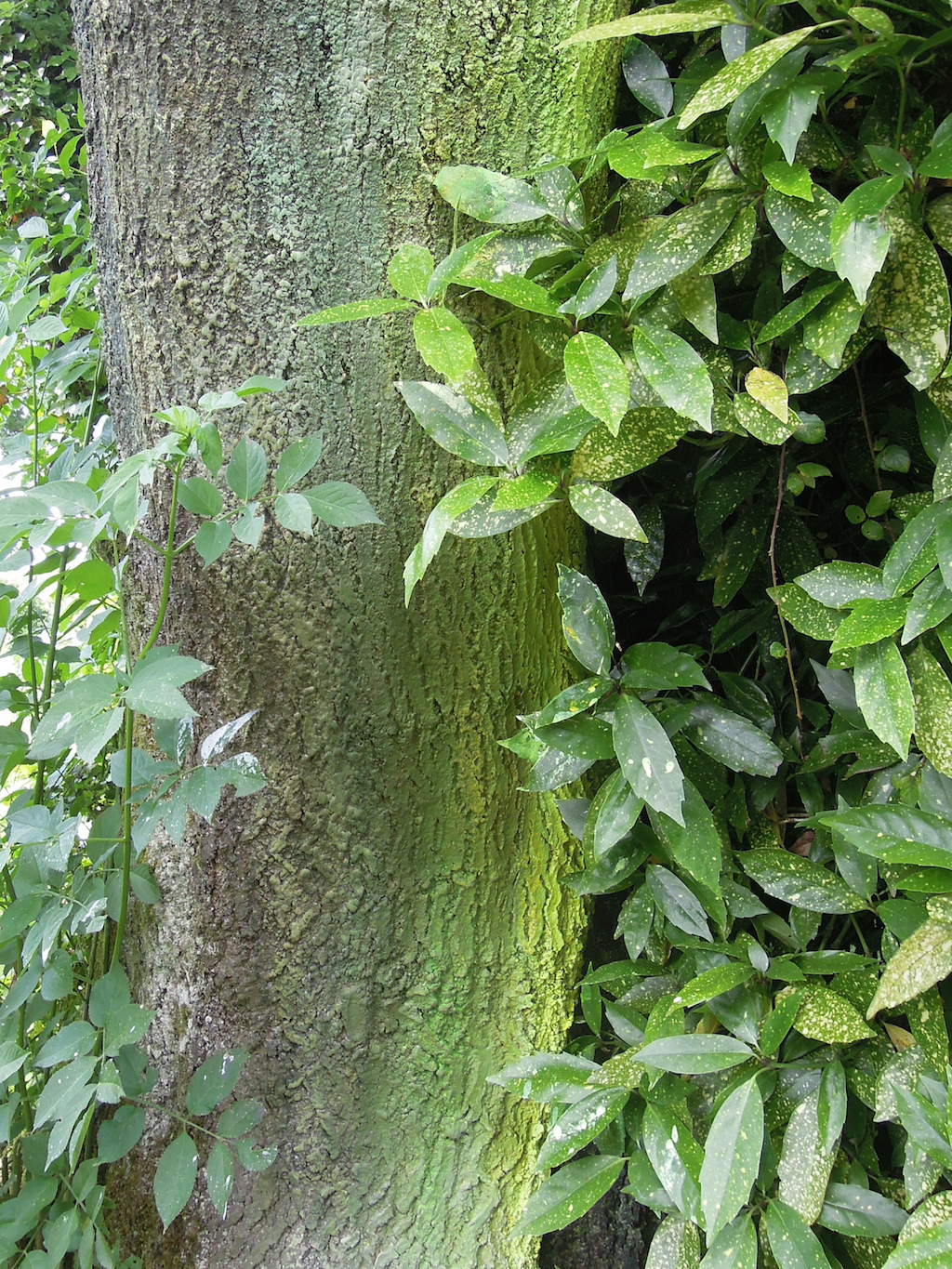 Flora Moscovici had already explored these paint-light relations in earlier pieces such as La peinture vient du sol, produced for the 2016 “L’art dans les chapelles” exhibition, and Everyday is not Grey (2013) and Everypainting (2011), respectively shown at Fire Station Artists’ Studios (Dublin) and at the ENSAPC (Cergy), and based on a principle of cast shadows. But this almost classical reflection is just one way among others of imagining an essentially site-specific pictorial approach, seeking to achieve a profound resonance with a specific space. This latter has little to do with any form of institutional critique, with the artist doing her best rather to propose an affective reading of a place, and load it, in the manner of a subjective genius loci, with new sensations, often floating and indescribable. The production of the work is thus preceded by a period of observation focusing on the architectural details, on the nature and colour of a rendering, on an atmosphere or on the traces of successive occupations, and on everything which may, in one way or another, stimulate the artist’s imagination and prompt her to create “another space”. In this sense, she has always paid special attention to marginal and in-between places, to stairwells and corridors, to nooks and crannies, to ceilings and to basements, from which she tries to bring out the plastic and emotional potential based on their function, their use, their volume, and their history. Her interest in interstices and areas of circulation may also be expressed outdoors, during strolls in which she invites the public to discover works set in nature (Les contes de saisons, in the surroundings of Clermont-Ferrand), or a nature that has been directly painted (Dans la maison de Monsieur C., at Cramont), which confirm the sensation of crossing a landscape that we may feel in front of her works. 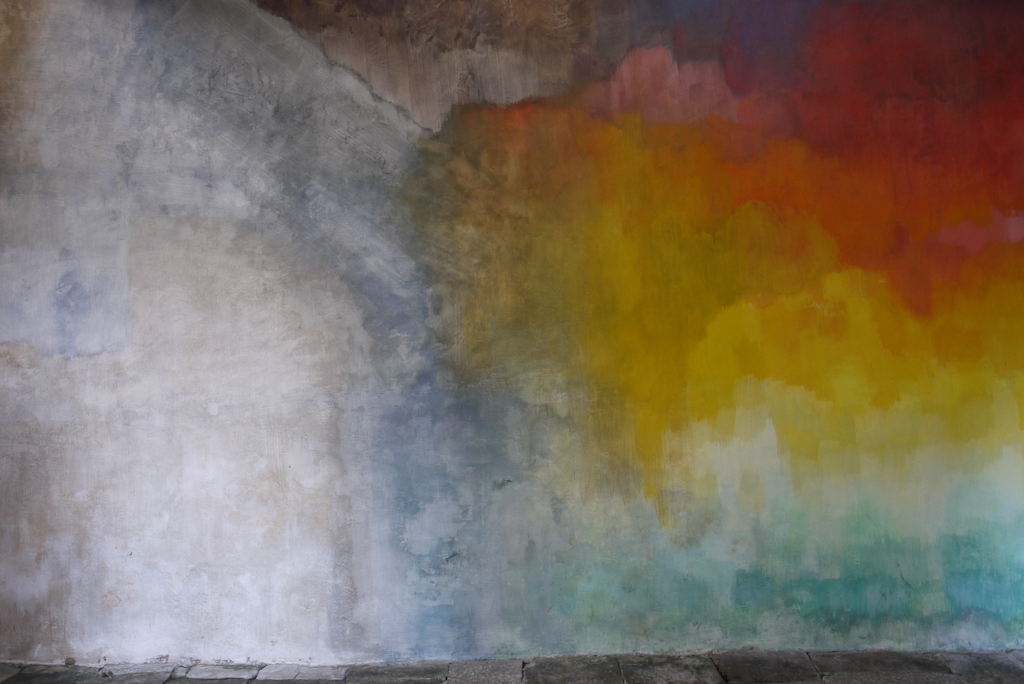 This approach to the edge and the micro-narrative, which we might describe as impressionist, has also had to gradually confront itself and adapt to the neutralized space of the white cube of galleries and art centres. For the exhibition “Des ciels et des sols”, held in 2015 at Le Quartier in Quimper, she thus plays on the memory of the art centre by, on the one hand, producing a bright gradation on a stretch of sliding wall based on the remains of pots of paint used during previous shows and, on the other, sanding the opposite wall in a form of pictorial archaeology (one thinks here of Pierre Huyghe’s Timekeeper), as well an architectural archaeology, because the sections chosen suggest the positions of windows filled in with plasterboard. Underpinned by a task of perceptible investigation, and underscoring a space or situation through colour, Flora Moscovici’s artistic gesture is part of a twofold movement of impregnation (of the place by the artist, but also of the painting? by the walls) and revelation. 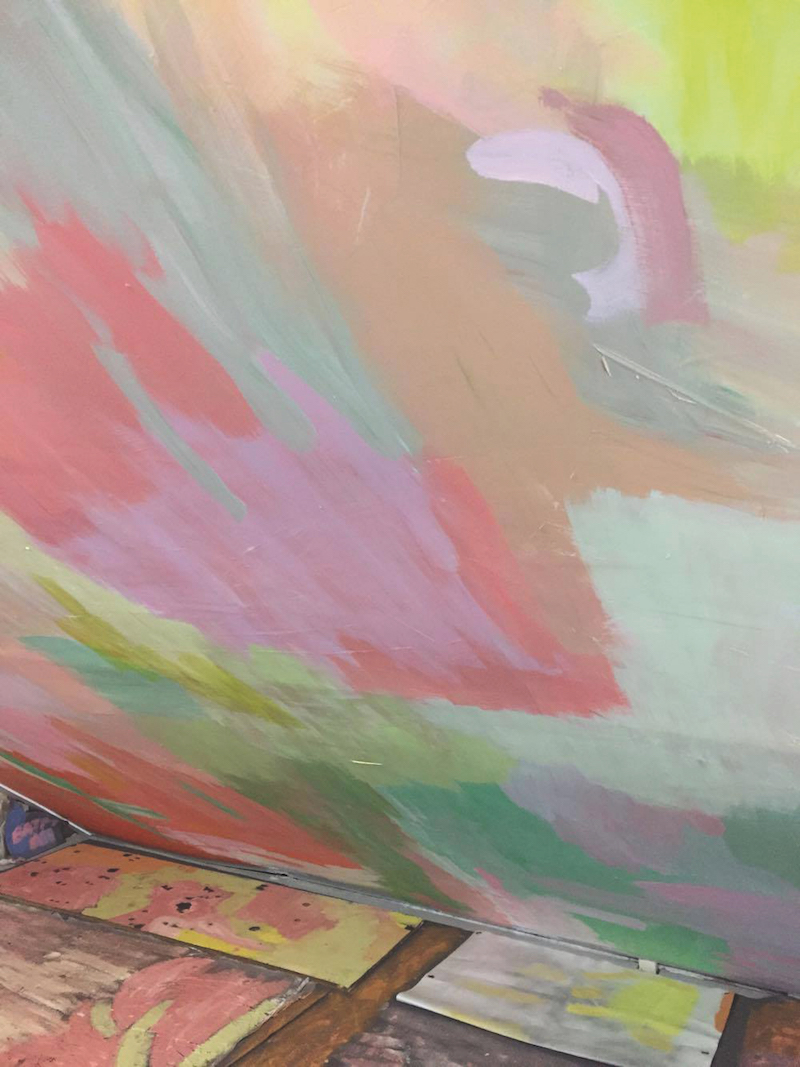 The site of the intervention becomes both an area of research and production, a studio and a project site. The fact of working on the spot, with no safety nets and with major physical involvement, and of proceeding in a linear manner, without turning back, introduces a form of experimentation which is lived through in the making, on contact with the context, tested by the paint itself, often liquid or volatile (spray, aerosol, airless pistol), and leaves the production of the work open to accidents, to the variations of gestures, colours and intensity, and to a certain contingency. The artist often works by touches—or marks and blotches—minimal and evanescent, using more or less absorbed or diluted layers, proliferating here and there. By way of this “atmospheric” approach, she tries to avoid the décor effect—but not necessarily the decorative—which consists for her in covering up and masking a place, and turning it into wings. The sole exception to the rule is the work carried out as a twosome with Yoan Sorin under the name of Mobilier Peint, which, on the contrary, as was recently the case at A-frame at La Courneuve,2 consists in an invasive occupation of surfaces and objects by paint. Flora Moscovici also insists on letting the process at work remain visible—by for example using the coloured dust of the sanded wall at Le Quartier to produce a piece dialoguing with the chequerboard tiling— along with the marks and traces of the application, brush strokes and coloured smudges spilling over onto the adjacent wall. When you discover these works, there springs to mind a whole chunk of art history: Giotto’s frescoes, colour field painting—and in particular Helen Frankenthaler for the liquid quality of her painting, as her “drenched” colours emphasize the share of chance in the composition—, but also a more “trivial” approach to building painting, stemming here not so much from the gesture of the professional (as is the case with Christophe Cuzin, for example), but that of the amateur who, by setting up and moving home, applies a clumsy coat of paint to erase the signs of his passage, or appropriate a new territory—as is also the case with graffiti. This great gap between the artistic and the vernacular, and the sacred and the commonplace illustrates Flora Moscovici’s desire to see painting in the entirety of its ways of appearing and existing, outside of any system of hierarchies of genres, qualities and techniques. Accommodating painting, the whole of painting.

1 With the programme Suite, the Centre national des arts plastiques [CNAP], in partnership with the ADAGP, is associated with independent venues in order to lend a visibility in exhibition form to projects which have enjoyed backing for an artistic research and production project by the CNAP. http://www.cnap.fr/programme-suite-2017

2 A-frame is an exhibition venue opened by Théo Robine-Langlois and Blaise Parmentier at La Courneuve.