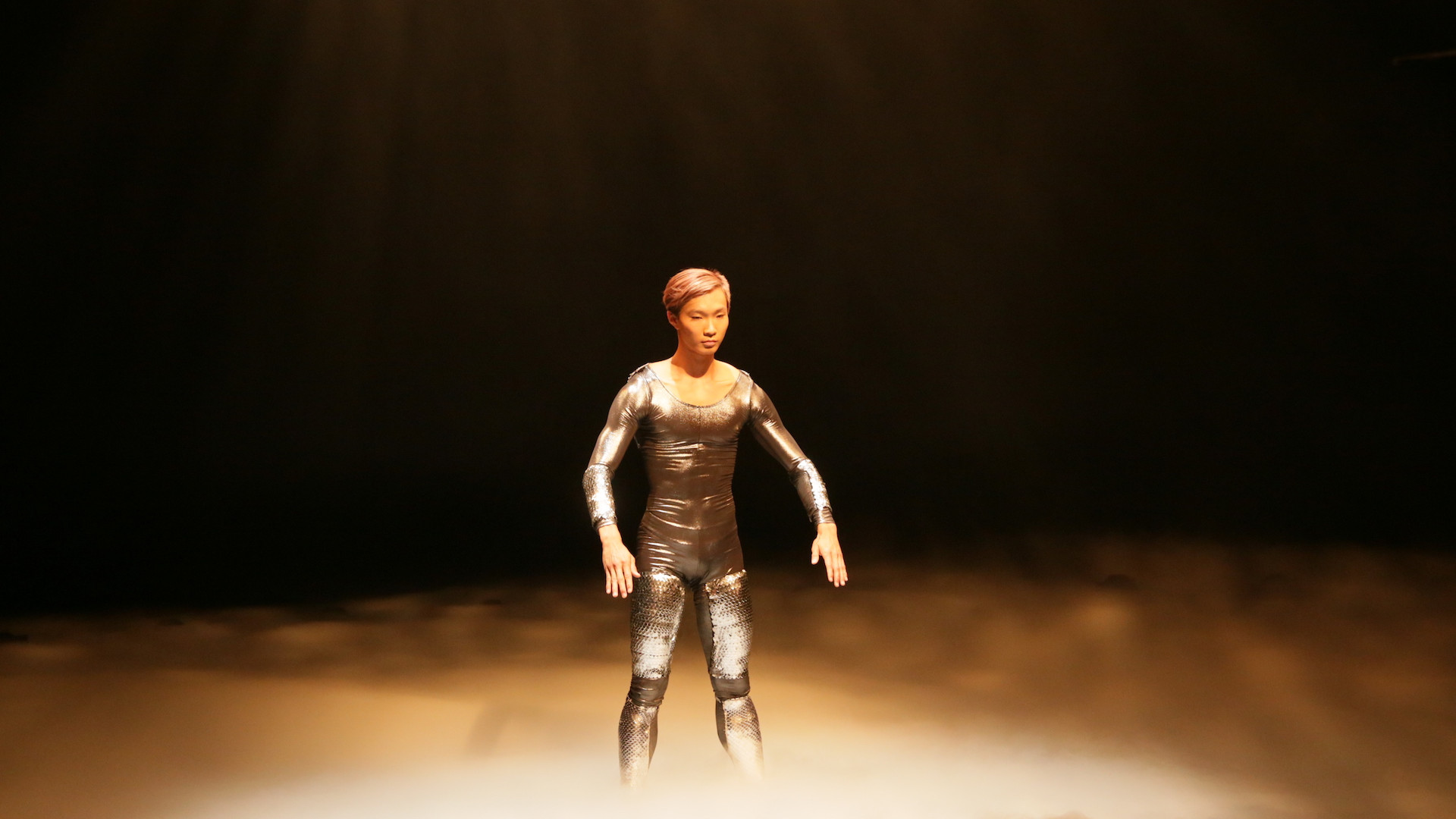 The edges of the cube and the leotard match the tincture which the artist has been applying for many years to his greying temples. A bright orange which contrasts perfectly with the green floor on which the female dancer is resting, arms braced beneath her torso, leg bent. This image, chosen by Triangle France for the poster for Charles Atlas’s latest production Tesseract □, is never to be found in the film. Meanwhile, a sandy landscape containing in the background a sort of space base has been embedded in post-production on the green ground. But the arresting contrasts of the image must have made it popular among other communication media which thus immediately disseminate the making of the film even before the first images have been seen. Other indiscretions in the wings and manufacturing secrets circulate. In particular, there is the photograph in which two dancers bend as if indifferent to the heavy camera trained on them, and an overall view of the studio which displays the technical arrangement surrounding the green-lined set. If what is involved here is just the documentation distributed around Tesseract □, it has come to pass on numerous previous occasions that the production methods burst onto the very arena of Charles Atlas’s works. In Roamin’ I, produced in 1980 in Merce Cunningham’s studio, you could see dancers taking part in a choreography especially devised for the camera, “avoiding the wires, equipment and film crew, staying close to the walls or crawling over the floor so as not to bother Atlas”.1 More recently, at the South London Gallery, the project titled The Pedestrians, devised together with Mika Tajima, consisted in a film-set installation across which visitors were invited to stroll while the shoot was underway, with Charles Atlas at the controls behind a mountain of monitors. So a way of broaching the artist’s immeasurable œuvre would perhaps be to cross this flat and polymorphous surface he operates on: the set. In the seventy odd films made by Atlas since the 1970s, not to mention the installations and performances, the set always seems to be that ‘queer’ space, at once a place of representation and production, and a dance and television studio, where dancers, fitters, cameraman and choreographers all busy about, willy-nilly, in shots and reverse shots alike. 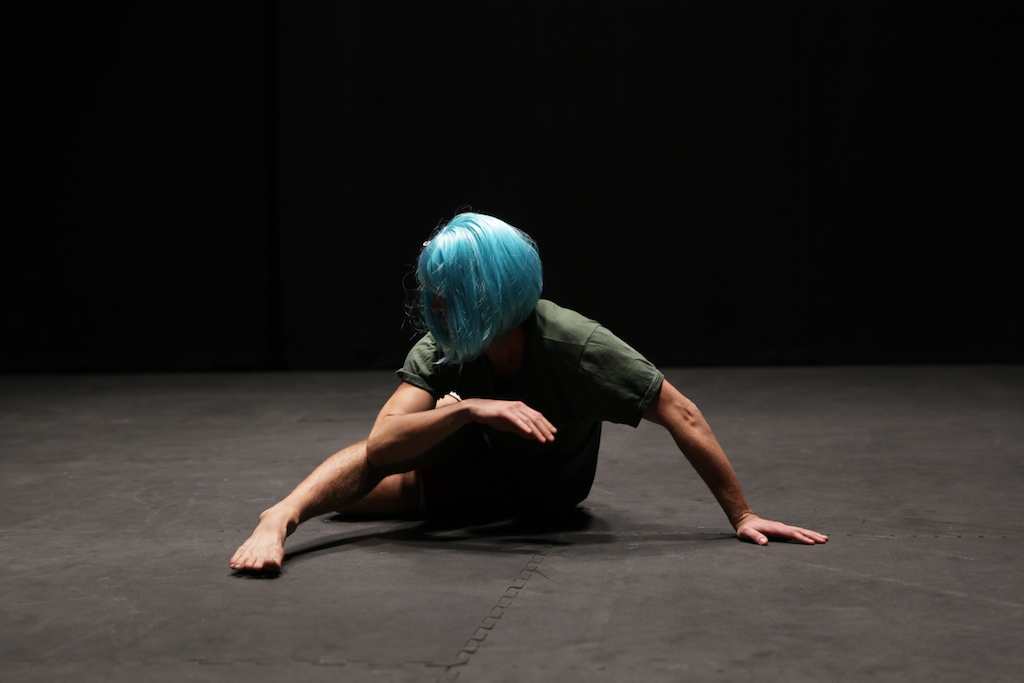 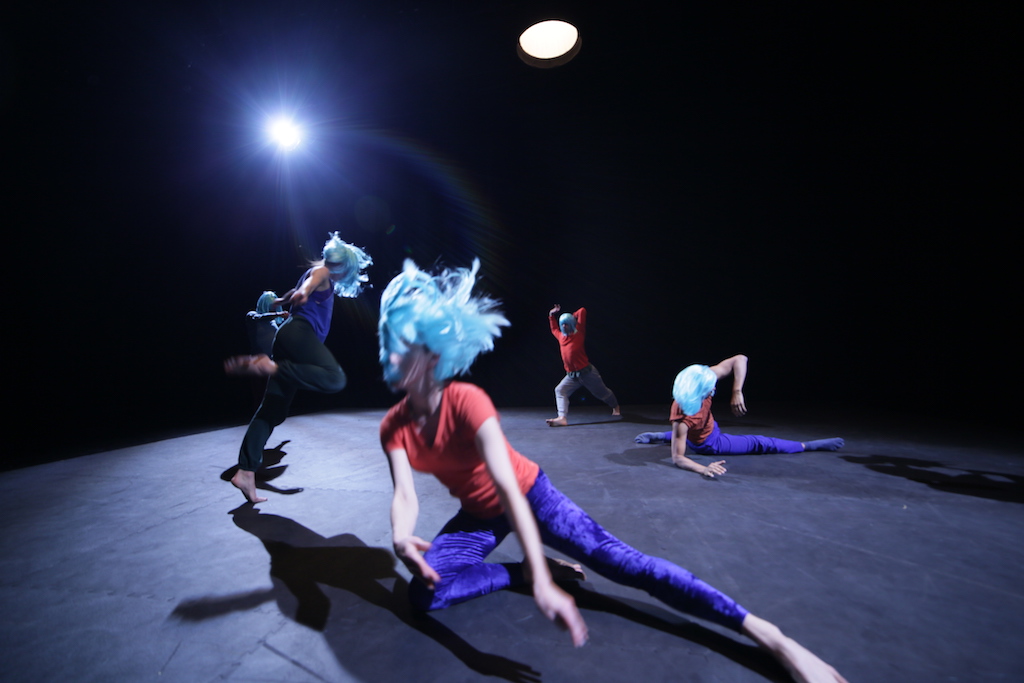 It is said that Charles Atlas was working as a dogsbody in the wings of dance studios when he met Merce Cunningham in the early 1970s. The latter was then working on an explosion of danced figures on the set, whose four sides henceforth functioned like stage-fronts. The different choreographic elements were independently conceived and developed within a unified space but without any vanishing point. This stage dispersion gave rise to a new form of floating attention in the spectator, whose eye can easily forget a part of what happens on stage, and just follow the movements of one dancer, then another, and let himself daydream. This infinite number of possible trajectories of an eye on the set is what Atlas chose to grasp to create films, and what he in his turn displays. At the same time as he reflects about how to cast his eye on these dancers, he learns how to master apparatus, whose increasing mobility and lightness will gradually permit the eye to become a dancing body among the others. While the field of dance in which Atlas evolved did away with any head-on relation with the spectator, it was a matter of reconstructing the choreography, bit by bit, for video. In tandem, however, there developed another form of spectacle which captivated Atlas just as much: television. Atlas did not seem to be attracted by the ubiquity permitted by the cathode spectrum, a retransmission at the heart of households, as much as by the mechanisms for constructing a programme and, once again, by the forms of attention created by it. Atlas spent a lot of time watching Andy Warhol who, in the late 1970s, turned his studio into a TV set and produced a series of programmes broadcast on cable. In the same logic, Charles Atlas, who would also make a few programmes for the small screen, grafted television gimmicks onto the dance set. He adopted the idea of a live montage which is to be found in a certain number of his projects, but also the frontal address to the camera, whose frame at times abandons the body in its entirety, and closes in around the face. The most eloquent example of these sets thus put together is probably to be found in the first few minutes of Hail the New Puritan, made with the choreographer Michael Clark in 1985-86. Rubbing shoulders here, in a permanent scanning movement head-to-head with the camera, were leotard-clad dancers traversing the set and scenery changes. 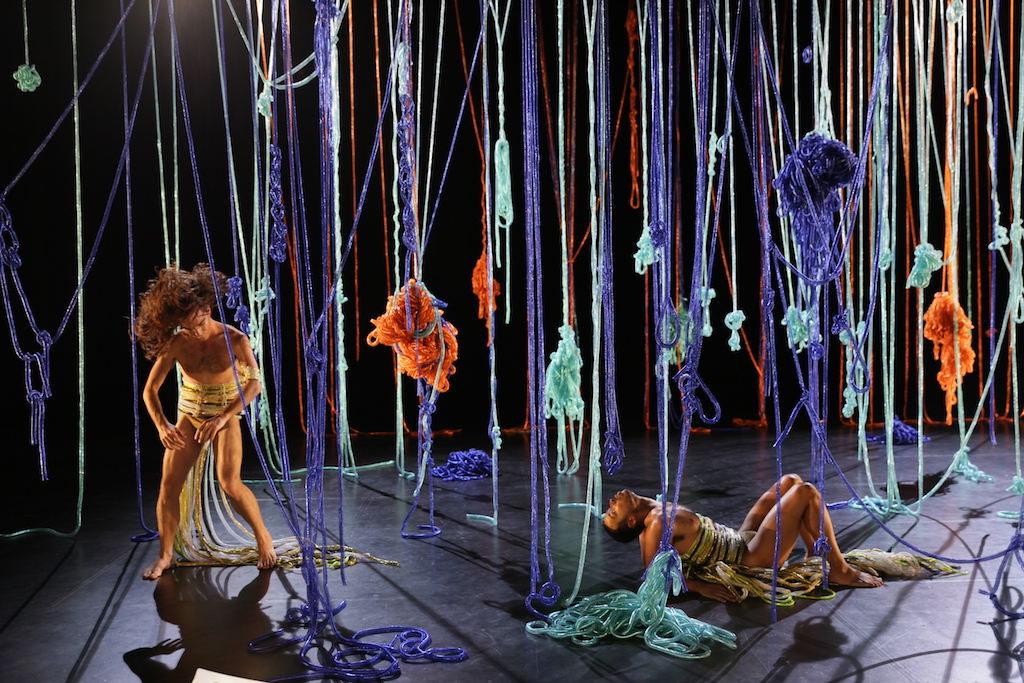 Tesseract takes this ambiguity about the status of the set and the intermingling of systems of attention to another dimension. As a play in two parts created in the EMPAC studios in New York State, it has the specific feature of having been conceived at once as a 3D film with dancers, Tesseract □, and as a choreographed play, Tesseract (□), itself taking place in the context of a shoot happening before the spectators’ eyes. At the front of the stage, Charles Atlas, with his back to the audience, manipulates the images of the performance which are captured and transcribed in real time on a screen. I have only seen the square part of Tesseract (with 3D glasses); a film where that “flatland” represented by the set encounters “spaceland”, i.e. the technology of the stereoscopic image and a certain imagination of the fourth dimension. 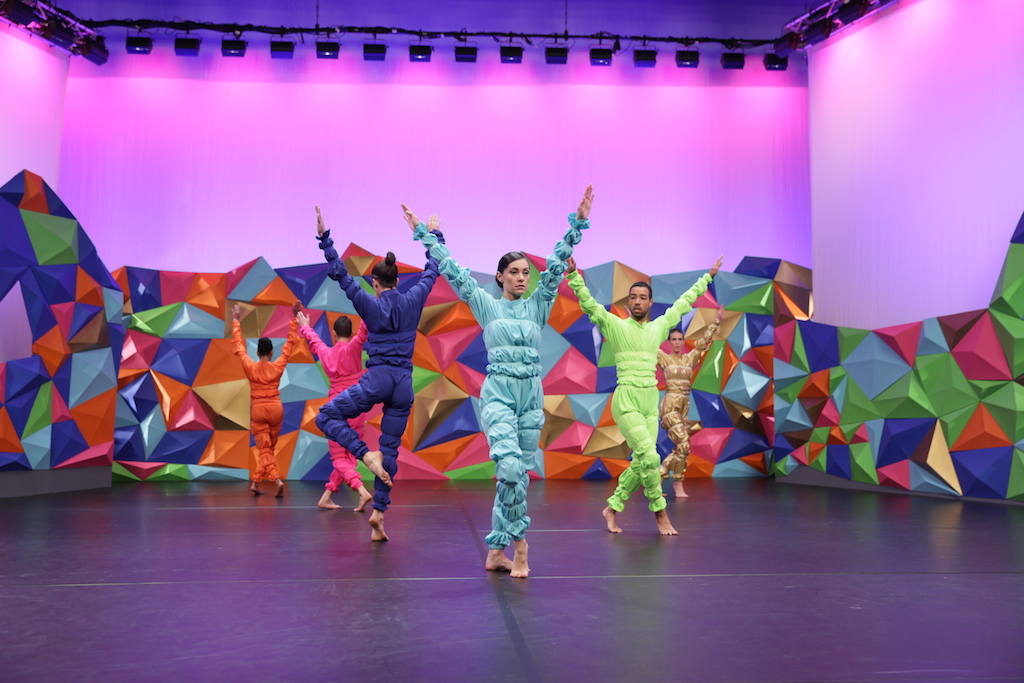 For some days now, I have been wondering how to describe Tesseract □. It is impossible to set the scene, because it is forever being disguised during the forty minutes that the film lasts. On six occasions, the set which accommodates from two to six dancers topples into another world, with no connection to the previous one. From the set where canvases painted with black and white abstract forms are hung, we shift to the kitsch of a harlequin décor then to a forest of fluorescent synthetic creepers. From each of these backgrounds come matching costumes for those involved in them. Charles Atlas is not content to change the back drop, he turns the set inside out, and for a few minutes it becomes a ceiling on which dancers with phosphorescent wigs twist and turn. Then he makes it disappear in a thick fog which gives the impression that the two performers wearing lamé leotards float on a cloud. There is not really any story to be told, either, with the permanent set changes each time entailing the reconstruction of a new space/time capsule, where a specific choreography is set up. Directed by Rashaun Mitchell and Silas Riener, two dancers from the Merce Cunningham Studio, the performers move within a vein of postmodern dance with usually non-narrative gestures. Within these moving sets, the dancers seem to be characters with no history whom the camera sometimes chooses to individualize using close ups of their faces, which can also be separated from the screen thanks to the 3D. One or two signs might suggest that they come from another planet. First of all, there are the somewhat robotic gestures of the two dancers who appear in a cloud of smoke, and then this dialogue, the only spoken moment of the film, which gets going between two other performers. Isolated against a white ground which becomes gradually covered with a bundle of lines, they talk about things in a cryptic language. So, perhaps as in Edwin Abbott’s novel Flatland, where a stranger coming from the third dimension describes his world to the residents of a world which only has two dimensions, the dancers who move in relief before our eyes are trying to make us sense an unknown dimension. Did people not used to say, quite rightly, that Merce Cunningham was trying to conquer a different space-time through dance? 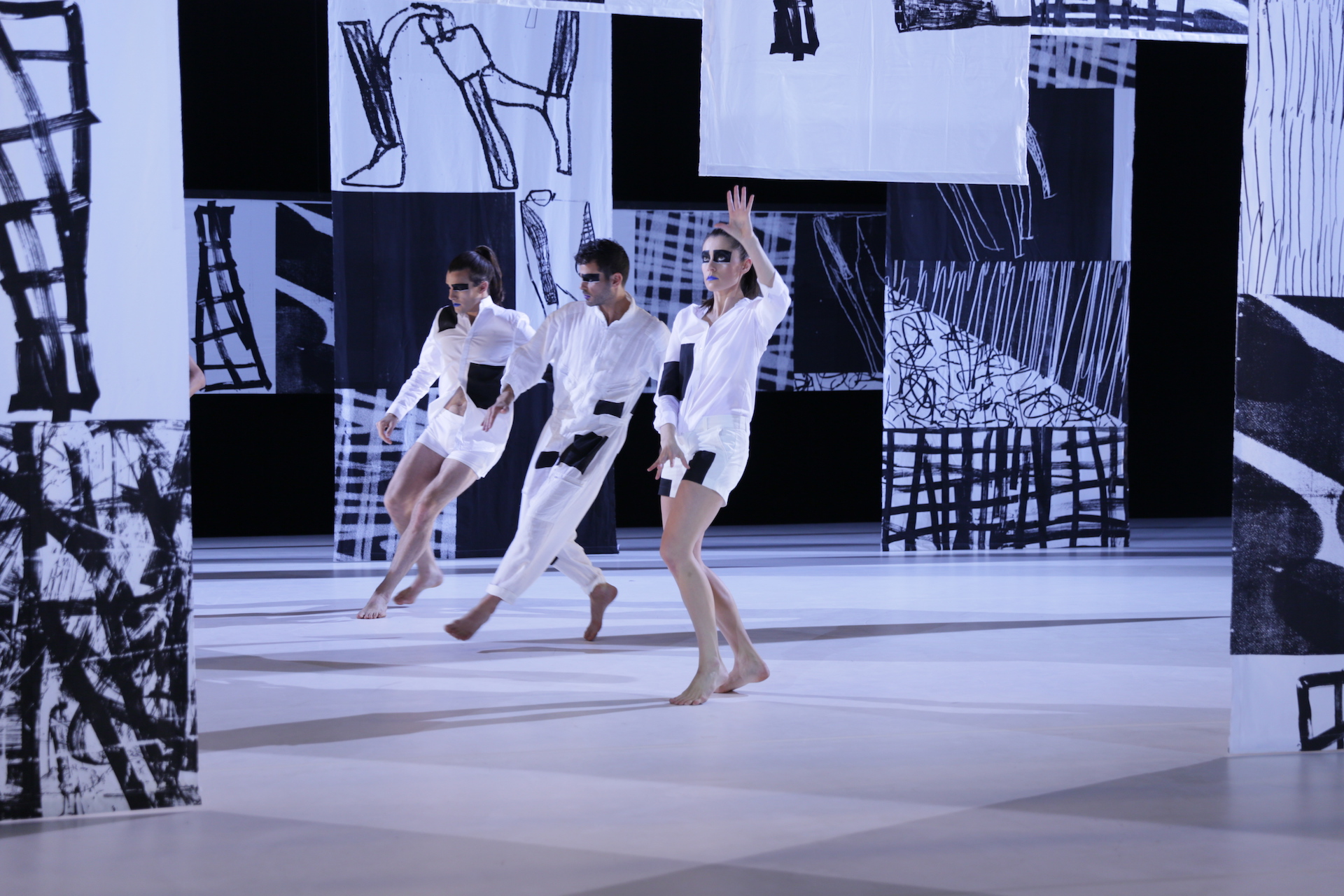 The title Tesseract describes what is also known as a hypercube, meaning a cube transformed by the prism of the fourth dimension. As a recurrent theme in science fiction, it is often a space without a background which one enters and which offers access to parallel realities. It takes the form of a quirky house in the eponymous novel by Robert A. Heinlein, and of a labyrinthine trap in Andrzej Sekula’s horror film, Cube 2. The most recent example is probably to be found in Christopher Nolan’s Interstellar. The protagonist, who has fallen into a black hole, enters a tesseract through which he can communicate with another space, as it happens his daughter’s bedroom, and with other suspended time-frames. In Marseille, the screen enshrined in a hypercube modelling on which Tesseract □ is broadcast, would thus point to our being able to communicate with another dimension. The fact is that the film does seem to fairly and squarely open up a sort of temporal fault, on the edge of which we are forever asking ourselves questions about the period since/in which this work reaches us. First and foremost, the images which Atlas composes on each set are imbued with a rather dated aesthetics, a vision of the future stamped from the 1980s. The space station set in the middle of a reddish desert, which was talked about at the beginning, seems straight out of David Lynch’s Dune, or the sleeve of Vangelis’s Hypothesis. And then there is this tableau which presents six dancers in baggy costumes against a background lined with brightly coloured triangles in relief, which conjures up the creations of Jean-Christophe Averty for the ORTF. By carrying out symmetrical movements which respond to one another, the dancers see the space of the set gradually split by a mirror effect, before the image explodes in a myriad of smaller elements which form a kaleidoscopic rosette on the screen. So the sharply coloured costumes, certain optical effects, and the directional movements of the postmodern dance seem to belong to a decidedly remote space-time. But on these sets from another age, it is recently developed cameras which move about, lending an incredible quality and fluidity to the images and movements of the dancers, which we follow all the better because all this is transcribed before our eyes in stereoscopy. State-of-the-art technology works its way into the historical depth like an anachronism. Tesseract □ gives rise not only to a visual destabilization through the perpetual renewal of the tableaus and the many optical games, but it also produces an effect of distortion around time with which the work is linked. And as I left the Panorama where the film is being screened, I could not stop myself thinking about Futuroscope, that neo-futuristic theme park opened in 1987, where the latest experiments involving in particular the 3-D and 4-D image still inform the imagination of a previous future. Furthermore, doesn’t the building dedicated to 3-D Imax technology have the form of a hypercube? 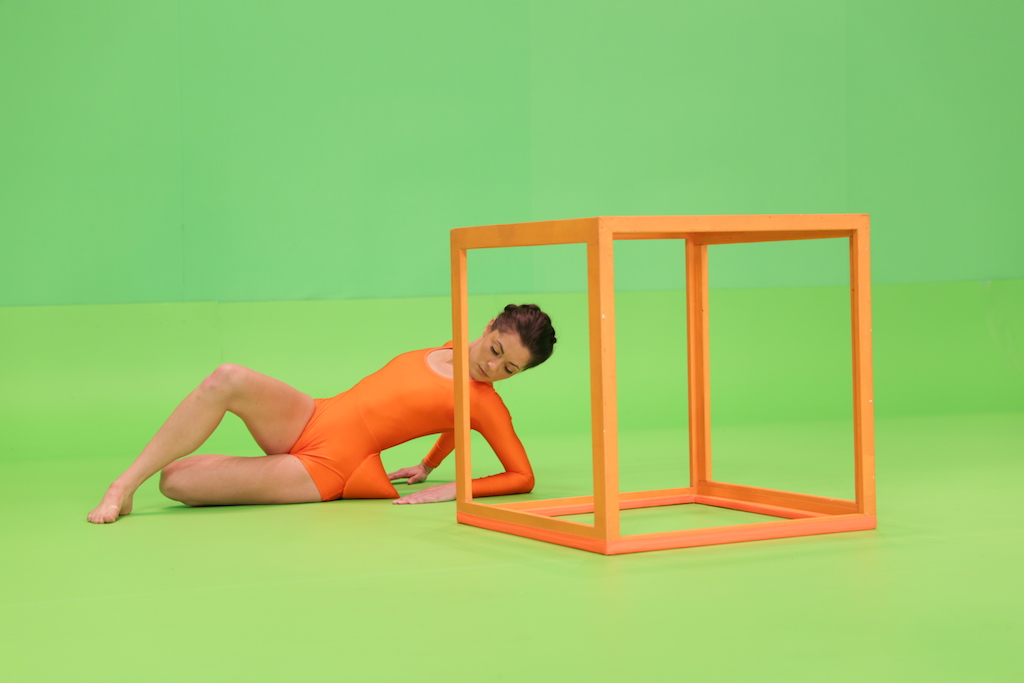 At the Venice Biennale, Charles Atlas was given a special mention for The Tyranny of Consciousness, a video installation made up in particular of a series of 44 sunsets compiled on a wall-screen. The scenario is always the same. When the sun plunges into the sea the three-dimensional world as we know it becomes flat and turns into a set whose boundaries we can no longer see.

Charles Atlas’s Tesseract is being presented at Triangle France, Marseille, from 12 April to 23 July 2017.