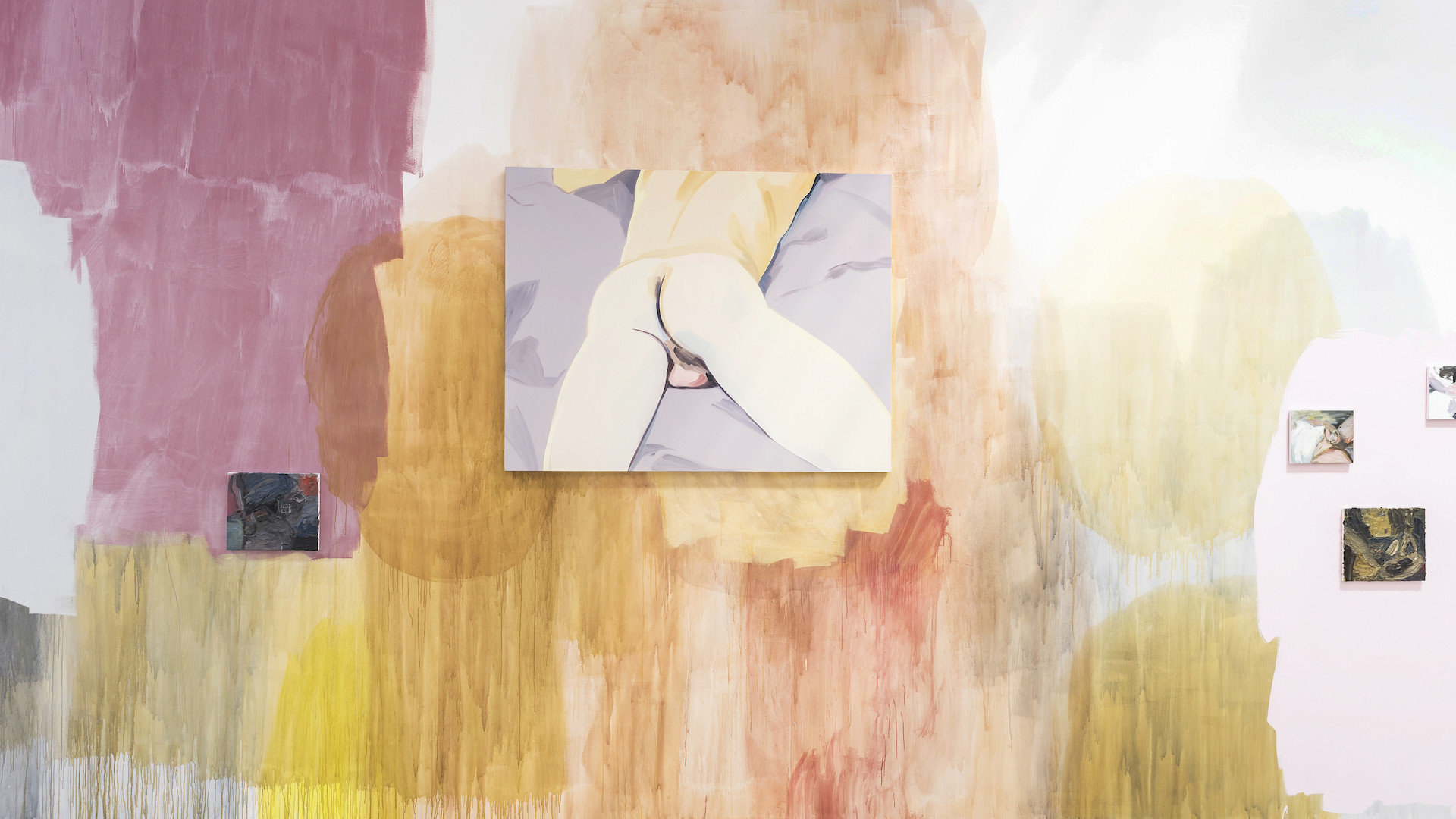 “What goes up must come down”

Let’s start with the most garish, the one centered on the end wall and brushed by the red trace of a brush that seems to have been carelessly wiped there. One thigh is blue, the other pink and yellow in places. Their curves have been flattened, so they look like wings. But around the anus, it becomes darker with purplish and green hues, beneath which hang the testicles, constrained by gravity pulling them downward to the bottom of the picture. Just before, on the perpendicular wall, members hardly emerging from flies point upwards, held by one or two hands. “As they say, what goes up must come down”.1

On these two walls at Le Confort Moderne2 in Poitiers, there are fourteen pictures and nothing but postures, and bent bodies, on their bellies or on all fours. Some have names but they don’t have faces. With one exception, Celia Hempton has painted just one precise part of their morphology, which stretches at most from the middle of the back to the crotch. 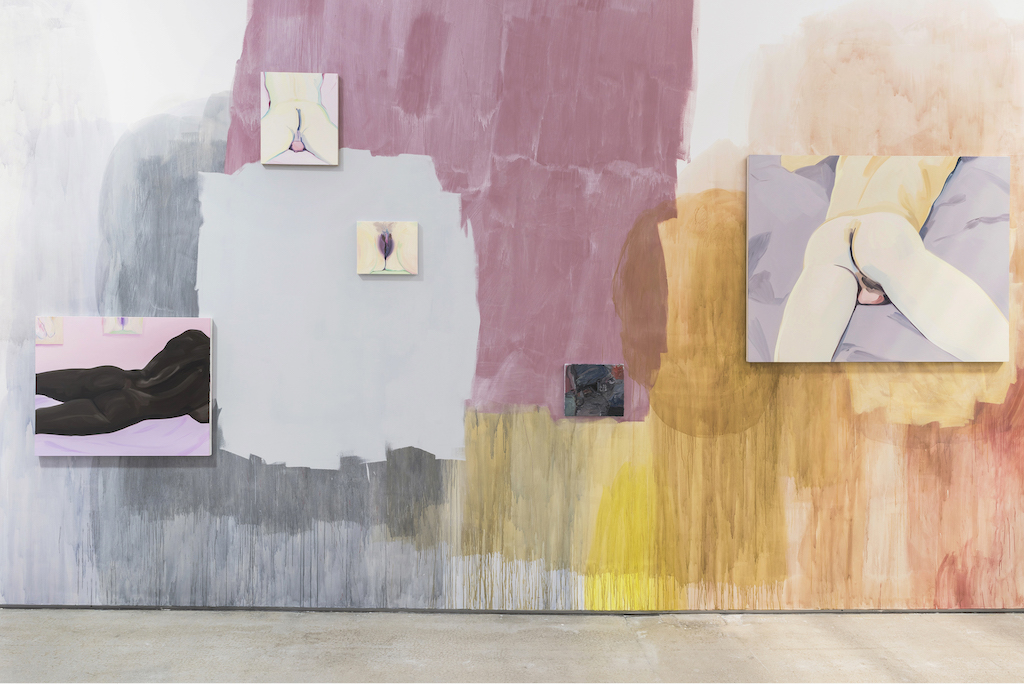 The smallest pictures are the most paint-daubed, those where the touch is thicker, and crusted in places. In them, the subjects appear head-on, trousers lowered. In this same series, I have seen some less overtly bawdy, tightened over faces often gripped by a semi-twilight, barely illuminated by the light diffused by their computer screen. It is hard to imagine that these paintings brushed in a somewhat gestural tradition come from the grid of a digital image, from a set of pixels captured by webcam which people connected on chatrandom.com use to hook up with users the world over. Celia Hempton is one of the site’s users: she puts her canvas beside her screen before logging in and passing from one interlocutor to the next. Sometimes a detail interests her, she paints a rolled-up sleeve or a puff of cigarette smoke before the window is closed again. Usually, however, it is men showing off and becoming excited in front of their computers. Then they have to be painted as quickly as possible, in the tension created by this decision: the end of the conversation will also mark the end of the canvas.

They are not Hempton’s only models. People in her entourage often come and pose in her studio. They can be immediately identified because their personal outlines are delimited, their sexual organs depicted in detail on very large canvases. She has had more time to observe them and smooth the pastel-toned flat tints of the sheets they are lying on. When we read ‘oil on linen’ on the label, it sounds almost more like an illustrative description, that of an unctuous body stretched out on a linen sheet, than a technical indication. There is in particular Kajsa whose splayed crotch she has painted with pale yellow flesh, whose curves on the inside of the thighs are duplicated by an almost fluorescent green, not to mention the purple vulva. These colours call to mind those with which Maria Lassnig outlined bodies and coloured skins. These irreal shades create an intensity in certain parts of the anatomy as if something was happening which might have to do with senses other than sight. Do they suggest a particular smell? Do they translate, like a thermic indicator, the sensation of a different heat? It must be said that it is painted so close up.

At Le Confort Moderne, the perspectival arrangement of these pictures with those coming from the series Chat Random, over and above producing the interesting effect of a variation on textures and formats, puts back to back two painterly gestures and two artistic postures which one might think of as relatively distant. “Post-Internet” art, a context in which Hempton’s work has been widely included,3 here co-exists with the praxis of the nude portrayed from a model, painted within the four walls of the studio. So the hanging possibly suggests the idea of painting as a conversational space, with the works revolving as much around first exchanges involving “age, sex, city”, to which ChatRandom invites us, as to the small talk we imagine her indulging in with the friends she depicts. 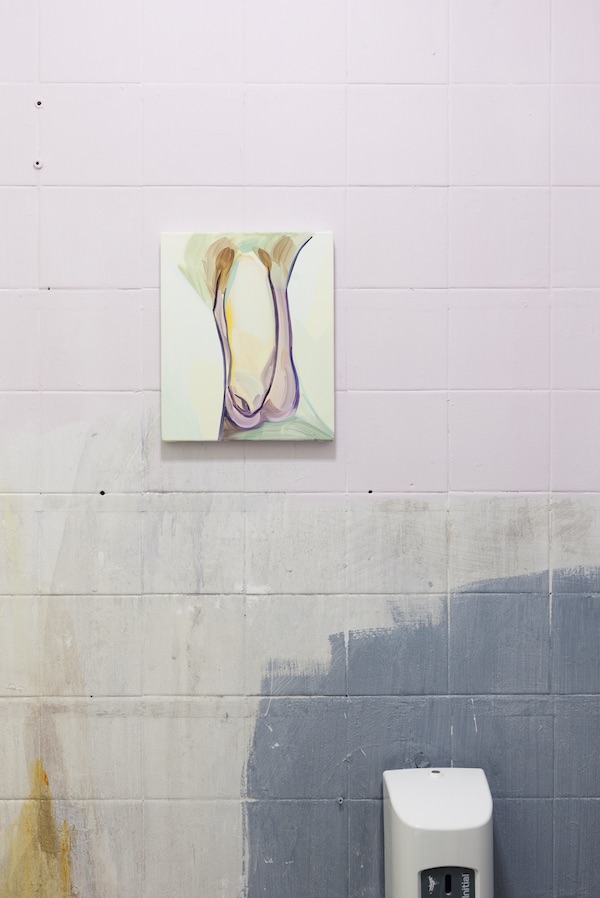 The artist incidentally emphasizes the performative quality of what is played out in the studio, a system which, in its everyday repetition, never posits exactly the same parameters. “What I’m looking for when painting is a situation more important than the painting itself”.4 We might already consider that the action painting of an artist like Jackson Pollock slipped the act of painting into the field of performance, with the documentation of the gestures directed at the canvas filmed in his studio having also enjoyed as great a posterity as his paintings themselves. Observed through her webcam, or when with her model, Celia Hempton for her part only ever has a single spectator. For her model, she performs without the romanticism and mysticism of the choreographed gesture, her sole challenge being to start painting all over again every day.

“Perhaps we attend to a volcano for its elevation, like ballet.” 5

Just as it is quite time-consuming to be caught up in the endless possibility of encounters offered by ChatRandom, looking at videos of erupting volcanoes on YouTube may turn out to be a thoroughly addictive and intoxicating pastime. Their destructive power clearly wields a certain fascination and the unpredictability of their activity represents a challenge in terms of representation wherein lies all their interest. Hempton has been painting landscapes for many years and the possibility of being able to look at them on the Internet has not called her attraction for the outdoors into question. At the top of Mount Stromboli, the painter finds the essential conditions for her system: a situation in which you have to become involved, a moment to be grasped, with the volcano spasmodically spewing lava and smoke, and the discomfort of an awkward perch. And the dust from the rocks in mid-air mingles with the oil on her palette. The thumbnail pictures produced up there have a subtle red glow which sparkles above the dark mounds that can barely be seen at night. Others see the depth of their black matter traversed by trickling orange flows. 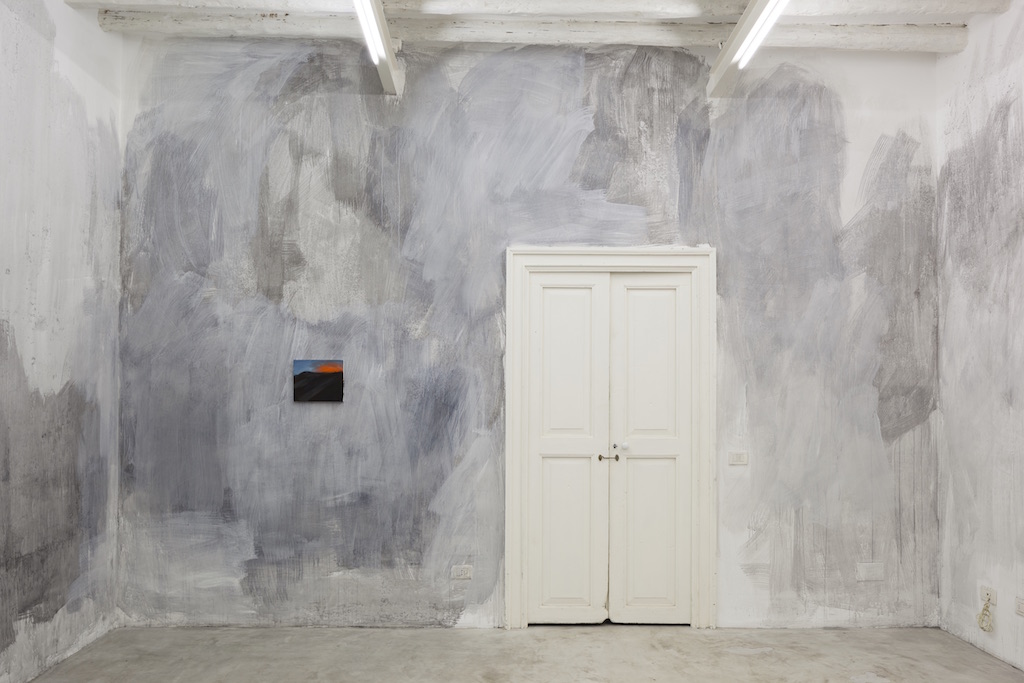 On the Italian island, as in London, these canvases have been hung on walls washed with grey shades, as if covered with ash on which it has rained. This intervention on the wall which precedes any hanging of the canvases conjures up both the volcano’s suffocating atmosphere and the ruins of a buried city. If the dust in the air can be mixed with the paint applied to the canvas, then, in a reverse process, why not re-create this specific feature of the air with the help of paint? The volcano will have its images, painted live, but also the reconstruction of its atmosphere, the abstract side of its landscape.

During her show at the Sultana gallery in Paris, titled “Lupa”, Celia Hempton also worked on the wall, but in the manner, this time around, of an unstitched patchwork. In places, large matt areas of a plum or beige hue covered the wall and other previously applied coats. The one or two canvases with splayed legs thus resembled small anatomical details lost in vast landscapes. These latter had the effect of extending them, offering those sexual organs an abstract body and almost giving the impression of a palette on the scale of the gallery, whose colours had apparently been organized on the canvases. Images which, in the midst of this chaos, are suddenly drawn. The hanging, like others since, seemed to suggest a layered time-frame. Because she continued on those colourful walls pictures sometimes abruptly frozen in the studio process but also because, although freshly painted, these frescoes seemed themselves to have undergone the passage of time. Like stripped walls whose colours have faded, or where certain bits have become detached, showing a coat beneath of a different shade. Those of the Italian cities where Celia Hempton studied. Painting those walls might be archaeology more than covering. And when in small rooms close to the conveniences as in The White Cubicle in London, and in discreet alcoves as at Le Confort Moderne, one discovers, on these painted walls, thighs between which a pair of testicles may appear, one thinks of the cubiculii of Roman villas, rooms whose now faded walls still keep traces of lascivious little cameos. 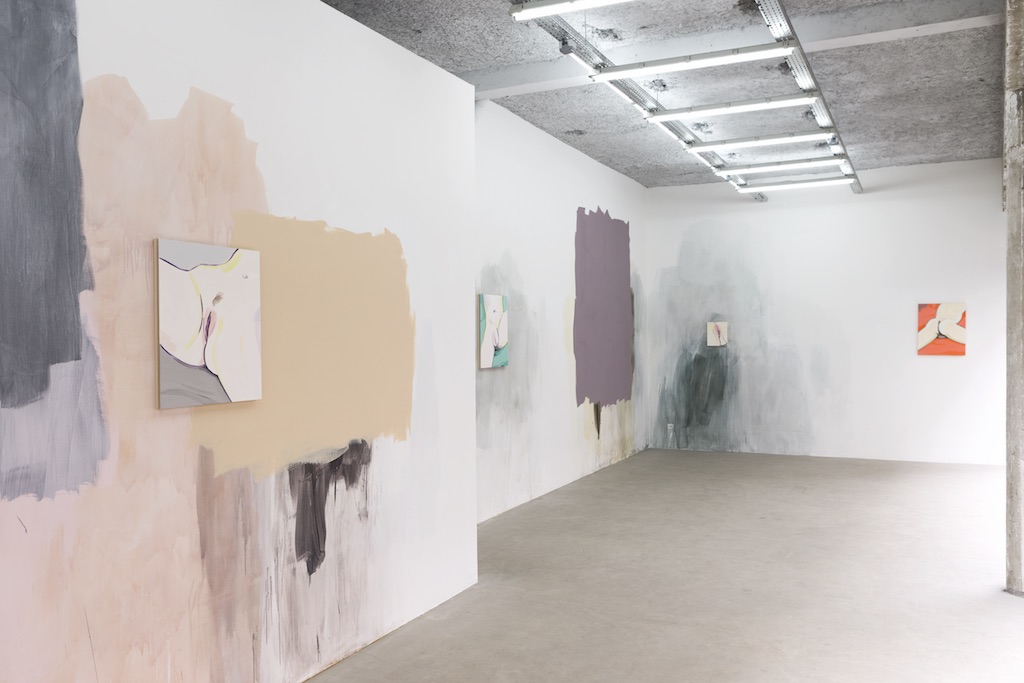 In Celia Hempton’s wall paintings and canvases, the discomfort of painting or being painted in the tiniest details is confronted with the pleasure of these vivid colours which slide along walls and along thighs. The pleasure taken in describing them. With hindsight, this arse looks like a volcano; everyone enjoys looking at a beautiful eruption.

1 Jack Halberstam on Jeff Koons’s phallic objects in The Passion According to Carol Rama, 2015.