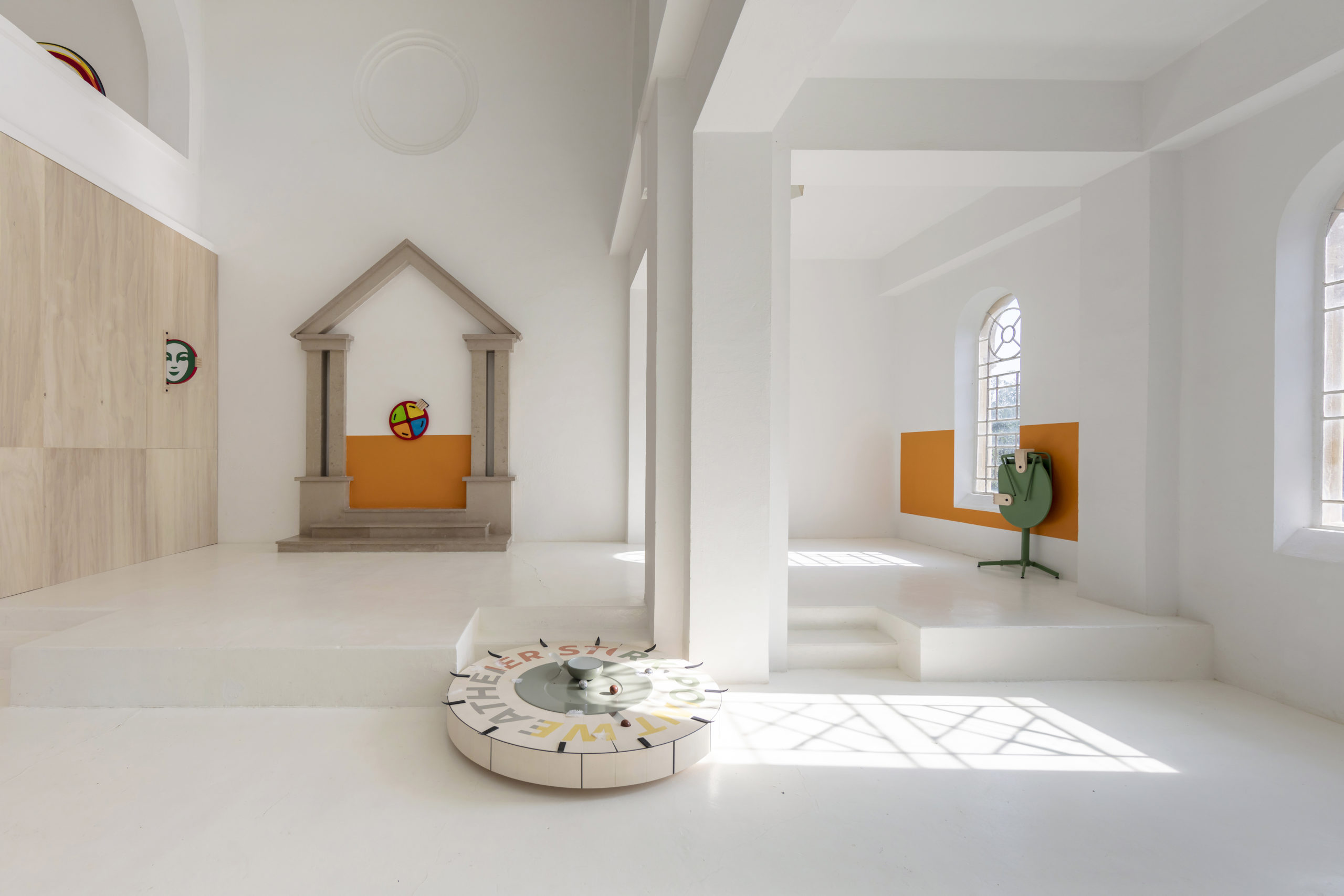 “All shelters, all refuges, all bedrooms possess values which are consonant with dreams.”[1]

Evoking private realms and public spaces, the home and the playground alike, Camille Blatrix’s “Weather Stork Point” leaves a mirage-like impression. The ready-mades, marquetry pictures and sculptures inspired by the artist’s personal life, the site, or by icons of consumerism form a setting for equivocal memories as familiar as they are strange. “This is how I work on my exhibitions: like really tight syntheses of feelings and evanescent pathos.”[2]

Aside from displaying his expertise, Blatrix also reasserts a meticulous approach to space (which he has always enjoyed interfering with and contradicting), as well. His practice has continued to evolve while maintaining its initial audacity.

Having received the Ricard prize in 2014, the young Parisian’s sculptures—which toe the line between art, design and craft—have since been featured at other recognized institutions in rapid succession (Biennale de Lyon, Lafayette Anticipations, CCA Wattis). Shrouded in an air of mystery, these works—a reflection of their time—seduce the viewer with their varied materials (wood, aluminium, glass) and techniques (marquetry, factory processes). The artist examines stereotypical cultural mores, questioning everything from love to popular culture, with an off-handed ambiguity. The works are intriguing; refusing to give away the answer to their enigma. An enticing formalism is suggested through the colours and images of objects, but this is beside the point; these smooth surfaces deceive us. Objects are often removed from their original function (vacuums, iPhones, etc.), and originate in the highly recognisable corporate or capitalist worlds. They draw attention to the emotions we tend to project onto the empty but universal shells. It is the notion of the object as reflection of the self, of our ties and behaviours, which interests Blatrix. Due to the straightforward installations the artist places these “emotional objects” (a term he no longer considers appropriate) in, a possibility for the experience of transitive emotions and reason is activated.

Earlier exhibitions featured interfaces which the viewer could interact with (intercoms and cash machines with operable buttons and sounds), populated by a series of semi-fictive characters which often seem to come directly out of a romantic comedy. Evocative of the objectives of a 30-something-year-old, from flirtation to romantic clichés (I Want to Spend the Rest of My Life With You, Love, Speed), the artist, now a father, memorialises the theatrics and a certain alienation from the reality of romantic discourse. More recent work is less “chatty” but equally as disturbing, containing biographical information and other alter-egos (altogether less present than in previous works) which reference childhood—a developmental stage which favours flights of fancy and a carefree existence.

Blatrix destabilises the viewer in an unpretentious way; he is motivated by both the element of risk and the avoidance of categorisation. Projects such as “Somewhere Safer,” at the Kunstverein Braunschweig (2018) are part of the scenery in this unsettling yet non-spectacular program. Unlike the cold sculpture in “Heroes,” at CCA Wattis (2016), technical objects which gave away very little of themselves, the German architectural interventions carried out at the Balice Hertling gallery (“A Ticket For Next Time,” 2014) explored ideas of waiting and interstices on display in Delme. On the top floor of Lafayette Anticipations (2019), the monolithic appearance of Fortune underwent a metamorphosis with each step taken toward the immense kitchen island. Its numerous details and precise fabrication performed a transfiguration on the countertop, bringing its colours, ribbing and singular images to life, such as with the fine plumage done in marquetry. With “The Barriers of the Antique,” at the Verrière Hermès (Brussels, 2019)—an unexpected twist in the artist’s past exhibitions—the “slippage between actual usage and projected fantasy of the status of consumer objects as well as that of art”[3] was revealed. This was yet another surprise given that the artist has tended to distance himself from the industrial-made objects that once interested him, concentrating a large part of his efforts on marquetry techniques. “I have always used marquetry, which for me is a much more direct way to achieve a result than sculpture; it’s like a window onto a style which is much more narrative, linking images taken from the outside world with a particular context or backdrop.”[4] Together with his father, a former painter and shipbuilder, he forged an unusual, dual initiatory path; a symbol-and-mythology-studded labyrinth (from Dante to the growth of a bean) which is the reflection of a quest for self knowledge.

For this pair of recent exhibitions, Blatrix partially reintroduced the ready-made, as if to subvert the absolute need to create. Blurring the lines between the original and the copy, he continues to feed into the ambiguity of the nature of the object. Meanwhile, the metaphor of childhood allows for the expression of the search for sincerity mixed with a hint of naivety. The idea for “Standby Mice Station” was born during a summer’s evening spent with his daughter, in an anxious pandemic climate. How to remain hopeful and protected from fear in a world on the edge of a precipice? The main exhibition space at the Kunsthalle was bathed in a half-light where here and there stood portraits with their halo of toys scattered around on the floor. Alternating between comedy and despair, Grumpy Cat and other archetypal animals were an invitation into a fictional realm. Despite having been conceived as the chapter following the Swiss exhibition, “Work Stork Point” (also the title of one of the principal sculptures) was different in a variety of ways. More fully realized and optimistic, the stork brought more encouraging news and a wholly different ambiance, in contrast with the insular feeling in Basel.

The Starbucks siren in They Play, We Play (Javier/Sabine) (made of maple, resin, Plexiglas and LED) combined sections of children’s furniture with strange objects placed in a structure that reinforced the feeling of strangeness. Upstairs, signs dissolved into maelstroms of colour. “For me, a logo is just a field of colour that I can mix up, as if the world of signs were just a card game. This is the theme the exhibition explores.”[5] Caught up in this whirlwind, the viewer in Delme was like a pawn in a huge, low-stakes game. The vicissitudes of systems of consumerism were combined with the apparent comfort of the figures, of the protective barriers. Other, more technical object-sculptures, such as Waiting for Someone (2021) were reminiscent of previous works and functioned as quotation marks within the structure of the exhibition; or of recognisable signs from the artist’s vocabulary.

The most puzzling aspect was the imposing, enclosed space which was made to look like a mausoleum. Behind a one-way glass lit by a small, strange light, the contents were displayed like a small-scale version of the Basel exhibition, with figures (a mouse, a crocodile) from the children’s room. “With the hut, and its light which watches over the far-off horizon, what is being described in its simplest expression is the condensation of the privacy of the refuge.”[6] But is the image of the candle stamped with the word “veritas” (read: vanitas) not suggestive of something closer to a trap?

The press release for the exhibition mentioned déjà-vu, which could be observed in the Marc Camille Chaimowicz structure[7] which Blatrix reproduced here as a reference to his having worked with the artist in Delme. Chaimowicz is known for subtly questioning the frontiers between domestic space and exhibition space, which made his phantom presence all the more suggestive of the fertile ambiguity of this in-between zone. Together with the cyclical movement suggested by the circles and wheels drawn by the works in the exhibition space (beginning with Stork Weather Point itself), the structure provided a counterpoint to the immobility described by Bachelard. The transformation of the past and cyclical time were what set the dynamic here, transforming any doubts we may have had about our perception into a fecund source for the imagination courtesy of the Stork. This was not just a nostalgic gesture to revive Chaimowicz’s exhibition; it was a way of regenerating a system of presentation, of projection and communication. The act of displacing signs and objects from the larger world to a sphere where action remains possible—in a domestic setting as well as in the context of an exhibition—was also reminiscent of the way language works. This difficult-to-categorise oeuvre examines the ways in which we create alternative modes of circulation which give way to a necessity for other types of narratives.

In the epilogue of Kirsty Bell’s The Artist’s House, which examines the theme of domestic space in artistic practices, similarly to Chaimowicz, evokes a new form of “interior” which goes beyond the domestic setting. Bell relates the way in which our current environment, which is filled with iPhones and other high-tech objects infused with affectivity, changes the makeup of narrative. It is now composed of simultaneous threads which can involve the same individual in varying virtual spaces (social media, Skype, Internet chats) and physical places in the same instant. Faced with the strangeness of constant online presence, which leads us to live multiple lives, interfering with emotional clarity, Weather’s space seemed to sidestep this technological metabolism and disembodied versions of our private lives. In response to this reliance on objects which creates static in our emotional states and relationships, Blatrix gives us the opportunity to pause and reflect. The artist is currently working on a book which will continue to explore this universe; one which recalls childhood in its multiple reiterations of withdrawal, allowing for daydreaming at a remove from any form of dependence and the construction of a vaguely cynical and poetic refuge.