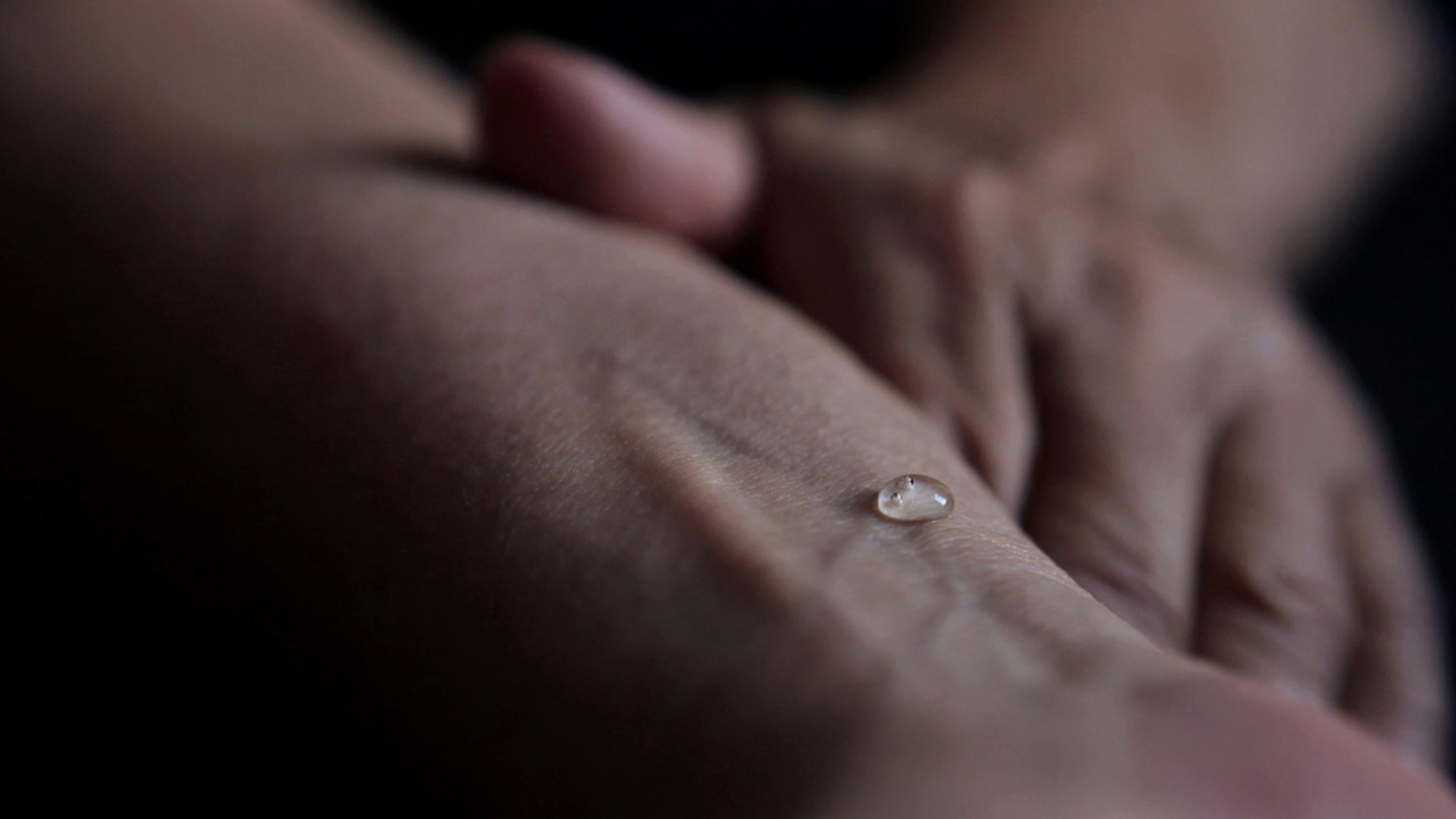 If we usually associate Ismaïl Bahri’s work with a form of slowness and something almost motionless, his mainly video works are nevertheless being forever caught in flows. To be sure, the pace may seem atonal or suspended, but there is always motion. This cadence, as it happens, seems suited to the observation of a tiny displacement or transformation, attentive to the detail of a vibration. It follows its very own logic, parallel to the flow of information continuously coming our way, not so much counter to it as in another time-frame. In the space of the image, something comes about, unfolds and unfurls, expands or shrinks, throbs or is consumed, in such a way that the apparent quietness and aesthetic harmony of his films struggle to conceal the latent tension emanating from them. 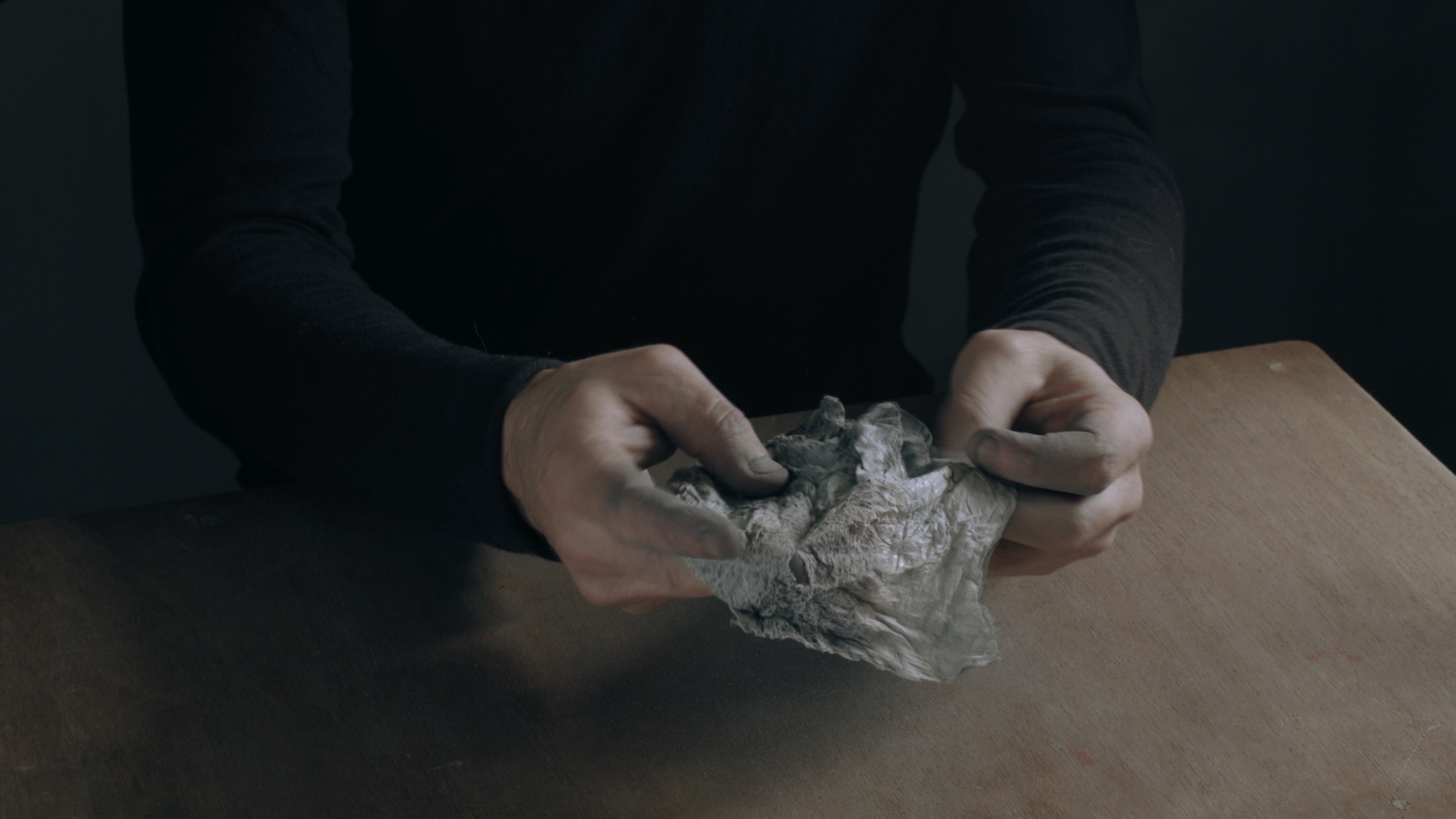 To make his videos, Ismaïl Bahri sets up a system which conjures up an experimental scientific procedure. Starting out from a hunch which he then tries to get to the bottom of and exhaust by repetition, beneath the camera’s eye—taking as his line the supposed neutrality of the static shot, although the framing invariably turns out to be decisive in his work—he dissects different phenomena which are, at first glance, commonplace, playing on an impression of déjà-vu and déjà-fait, an anonymous and unconscious ceremony, carried out a thousand and one times: letting sand flow through the fingers (Sondes, 2017) or burning a sheet of paper (Source, 2016). These actions are recognizable and identifiable by everyone, and they sidestep the didactic pitfall, and the simple demonstration of a trick or a good idea, with the precarious balance over which the artist winds revealing their poetic and/or political content, lending a new aura to that familiar look. The frame defined by the lens thus records a gesture that is as simple as it is enigmatic, the manipulation of an element or single prop, subject to a set of variations wavering at times on the edge of the perceptible. In this sense, the artist’s body and quite often his hands are ubiquitous, always at work, at once agent and standard of the micro-events which take place before our eyes. Taking time to gauge things, therefore. It is in this time span, in this scrolling, the way we would talk of that of a celluloid film, that a whole range of ambivalent affects will show itself and come to the surface. At the risk of oxymoron and taking the words in their loftiest sense, we might put forward the idea that Bahri’s work is permeated by a form of laborious facility, a mixture of obviousness—of limpidity and the intentions and the effects produced—and a necessity to do things by oneself, experiencing a temporal quality and perhaps also the body’s capacities for recording, its volatile memory. So in the series Revers (2017), we discover the artist in the process of crumpling and smoothing out the glossy pages of magazines depicting bodies idealized for a few minutes, until the initial reproduction evaporates and becomes like dead skin, as if he were literally erasing them and interrupting their circulation, and the coloured pigments forming it are deposited, through an interplay of transfer and impregnation, on the hands, dyeing them. A fortuitous encounter between two bodies (flesh to flesh), between two ways of producing and broadcasting images. If in this way Bahri makes an attempt to reincarnate these fashion and publicity photographs with their smooth, hairless bodies, devoid of marks and veins, and of their very epidermis, his gesture also illustrates the transmissibility of images, and their ability to be appropriated and alienated ad infinitum.1 The perceptible action, the experience of rubbing incarnates and produces a new image. 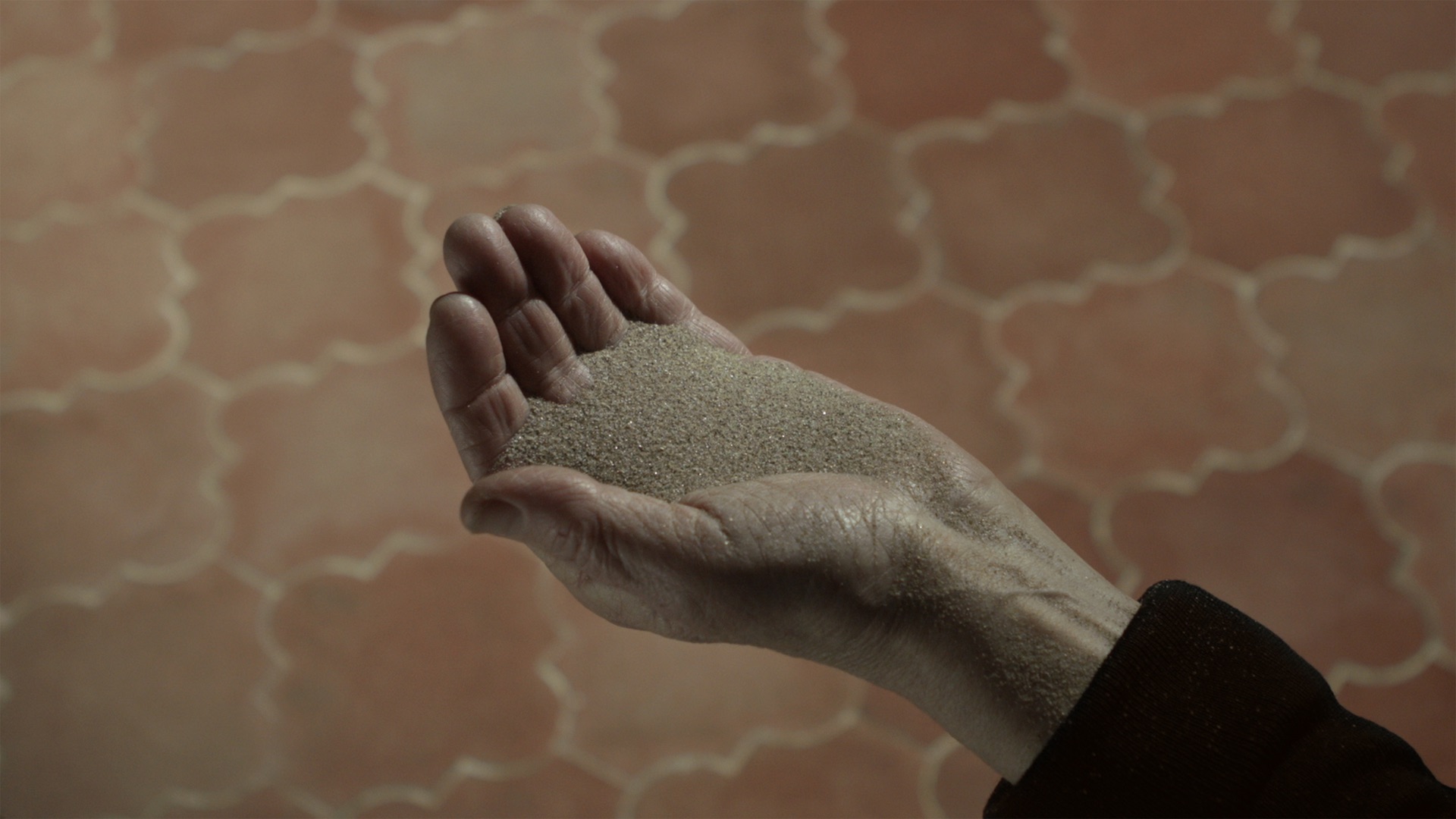 The video Ligne (2011) was already permeated in its own way by this elective surfacing between transmission and the organic. An outstretched arm fills the frame of the image which might be photographic if a drop of water placed on the skin, straddling a vein, did not react to the bloody impulses. If, here again, this is a matter of circulation, the drop works like an amplifier, revealing, like a magnifying glass or an optical lens, the movements and the inner cadences of a body, and its at once natural, autonomous and anxious relation to the outside world. This work incidentally opens the exhibition which the Jeu de Paume is devoting to Ismaïl Bahri, whose seemingly laconic title, “Instruments”, seems to offer a shrewd breakthrough for broaching his work in a transversal manner. Each one of his videos actually involves a particular “tool”: a drop of water, ink on whose surface a fragment of newspaper moves by capillarity (Film, 2012), sand, fire, a woollen thread tossing about as it is rewound (Dénouement, 2011), a sheet of paper vibrating with the effect of wind (Foyer, 2016), the fabric of a flag traversed by light variations (Esquisse, pour E. Dekyndt, 2017). But it is also the hands and, needless to say, the camera acting like a body. We might also bring in the terms media and interface (here “analogical”, to do with the ordinary) to describe these elements which form these in-between spaces enabling the artist to work on the surface of the physical world. In many instances, they are the object whereby a revelation intervenes, as in the photographic process, an appearance that is always sudden and magical, which the camera, as witness, grasps and fixes. It is nevertheless important to nuance this revelation, to such a degree do its conditions, and the process which it calls for, involve, in one and the same movement, those of a fading, an alteration or a disappearance—offering in passing, it seems to us, a parable to do with knowledge and science. The incandescent halo which is drawn in the middle of the sheet of paper in Source already harbingers the inexorable and imminent destruction of the surface accommodating it and, with it, the circumscription of the phenomenon observed, and of the experience. We should perhaps rather replace the idea of revelation with that of affection, in the sense of affecting and being affected by a situation, which is to say, acting on and reacting to an environment. 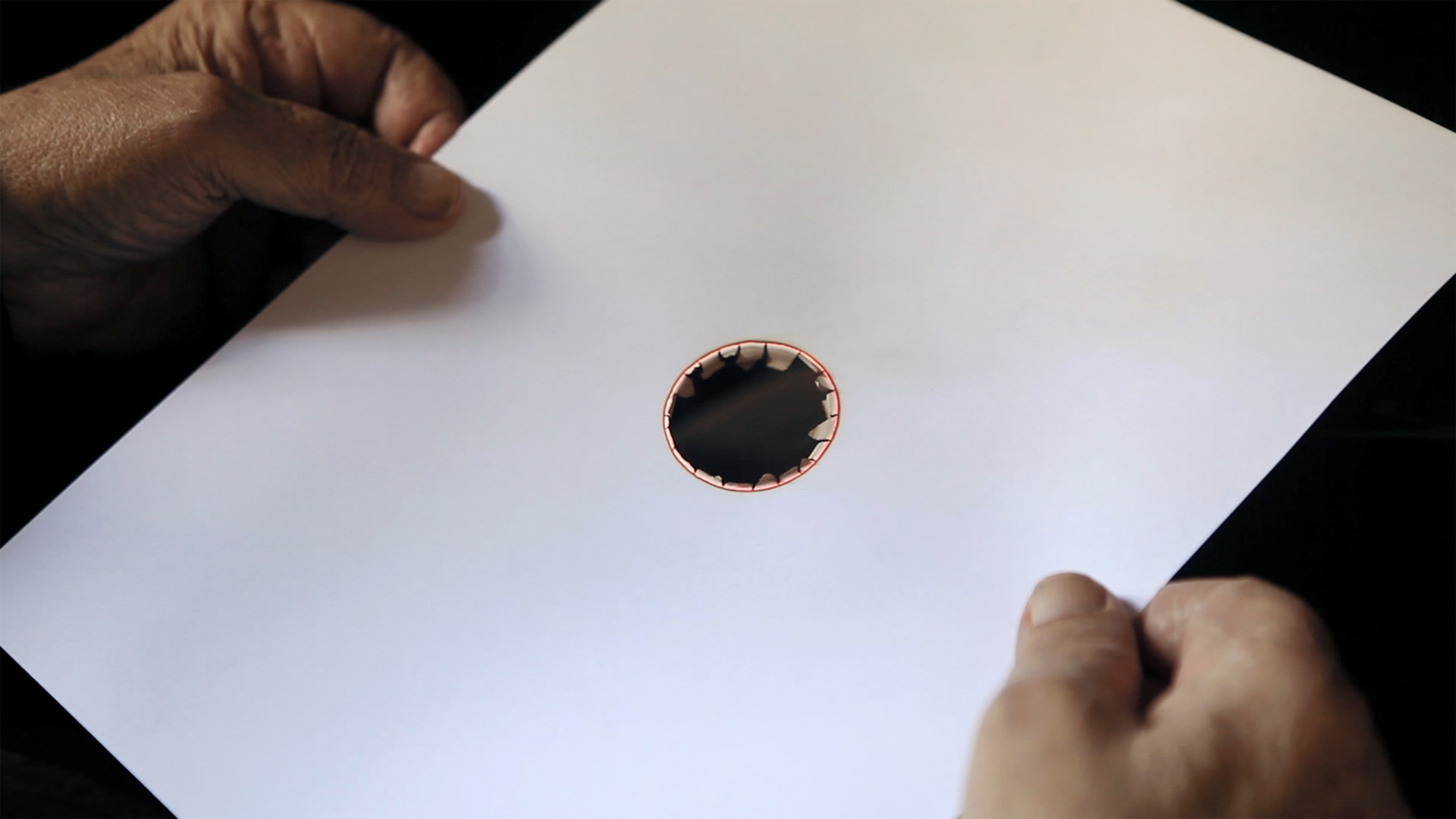 This aspect is more specifically expressed through the video Foyer, whose many-meaninged title evokes by turns house, fire, family, optics and photography, a place of reception, or a place around which we find ourselves, or the origin of a dissemination. As he strolls around the streets of Tunis, from where he hails, Bahri films a sheet of white paper fixed in front of his camera’s lens. He duly records the variation of light and the vibrations caused by the action of the wind, which modulate and nuance the surface of this projection medium, which is as light as it is reflecting. So what is just a groping quest, a study in search of a subject, will take on an unexpected turn: on this animated, quivering monochrome, and on the acoustic atmosphere of the city, are suddenly overlaid the words of passers-by spontaneously reacting to the presence of a camera in the public place, an object of curiosity or fear, what is more, when it is fitted with a gadget that seems to obstruct its main function. Like sensitive skin echoing both celluloid film and the cinema screen, the sheet of paper transforms the camera into a blind, almost radiophonic medium, summoning a sort of continuous off-screen element where the body, so present in the other works, totally disappears in favour of the word, thus re-enacting, the other way round, the visual but soundless origin of the cinema. The medium and its makeshift prosthesis (its handicap?) thus become the object and place of encounters. The discussions between Bahri and the people he haphazardly crosses paths with during his strolls, young jobless people, policemen and photography enthusiasts, start around his intentions or the effect of the wind, letting the ambient social and political context filter through and re-enacting the figure of the artist in the city. The video illustrates a twofold motion: if the environment of Tunis, its light, its air and its inhabitants, imbue and “impress” the image, the camera is not functioning here like a mere witness, it also acts and transforms, in its turn “impressing” the urban rhythm by its incongruousness, as if it were forming itself as an environment. Precisely where the above-described works presented a defined framing and the experience of a gesture working in a way in a closed circuit, Foyer gains in freedom and in interaction, letting itself be guided, like a suggestion for developments and quests in the offing, by chance, by taking into account an unstable environment traversed by a set of permanently evolving mediations and arrangements.