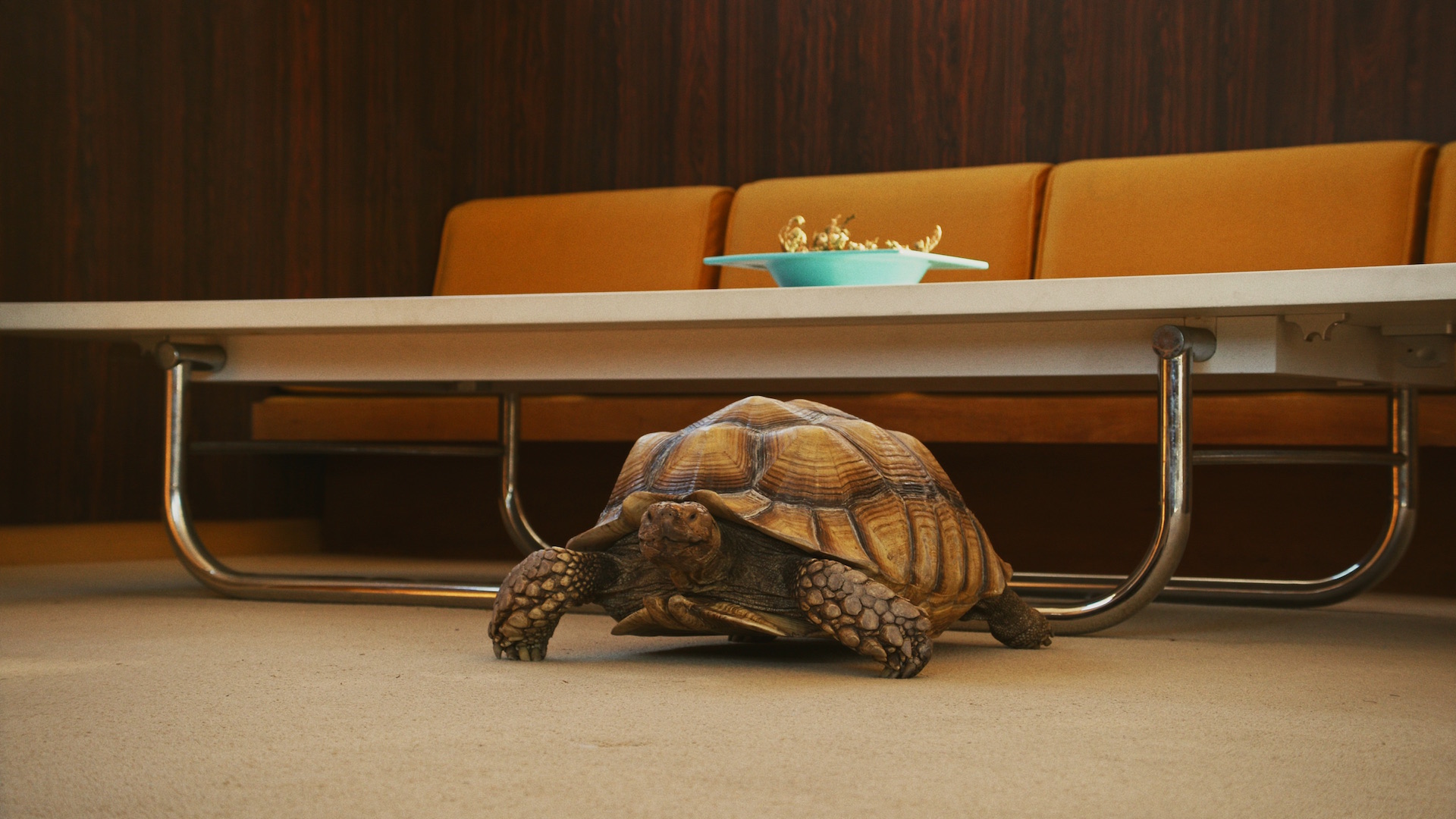 Ben Thorp Brown presents at the Jeu de Paume a three-part exhibition that outlines his concerns about empathy, a feeling that is difficult to define—not to be confused with compassion—and that seems to have difficulty imposing itself in a world devoted to individualistic demons and more tempted by transhumanist theories than by mutual aid reflexes. The puzzlingvideo Cura,produced as part of the Satellite programme, follows a turtle wandering around Richard Neutra’s famous VDL House, built according to principles driven by empathy concerns quite similar to those of the artist. By attempting to restore legitimacy and strength to a thought of utopia to which we systematically oppose the irrationalism of its prerequisites when it is not the irrefutable arguments of Darwinism, the artist demonstrates that the forces underlying empathy are based on another vision of history, based on collaboration (between men of course but also with animals, the living, nature and things), that undermines certain fundamentals that can be blamed for many societal dysfunctions. Like any utopian thought, however, this raises many questions that we have tried to highlight in this interview.

There’s a powerful architectural theme in the film you’re screening at the Jeu de Paume in Paris, using the figure of a tortoise, an animal that represents architecture if ever there was. You lament the fact that this latter no longer offers this possibility of interconnection between people which it used to have when it was still composed of natural, porous materials, and that it shifted towards a safety-related and in fact “compartmentalizing” function which corresponds with the deep-seated individualistic trends of the time—in a word, that dwellings have become kinds of safes for humans. This doesn’t stop you defending a more empathetic vision and displaying great optimism, but do you really think that the future will be more favourable towards people living in large cities, when the decades to come will irrevocably lead to an over-concentration of the world’s population in the large metropolises, and thus make it harder to introduce architectural programmes that are more respectful of sensibility, inter-connection, mutual assistance, and the like?

I think it’s a question of priorities, which is essentially rooted in this question of how we view another. Recently, we’ve encountered some pretty extreme examples of how the built world and the natural world come into conflict, whether through fires, rising temperatures, hurricanes, and other more directly human designed problems in building safety such as the Grenfell Tower, or the continued use of lead pipes in the water system in places like Flynt, Michigan (among others) that have caused significant health problems. I see these as linked phenomena in a world that is eroding in its ability to care for one another and itself. With each example, we can point to specific causes of the scenario, often directing us to explanations that appear outside of our control as humans, however, part of my interest was to speculate on a new kind of empathy that might stretch between humans, the natural world, and the world of things, shifting the narrative that we tell ourselves. I wanted to achieve this through some fictional means, and I imagined another chapter to the Roman myth of Cura told from the point of view of a tortoise who lives in a modernist architect’s house in Los Angeles, which is one component to the overall project of The Arcadia Center which is an institution that comes into the world to help a community investigate these concerns.

You want to oppose a narrative to the one that certain transhumanist authors like Yuval Noah Harari pinpoint, emphasizing going beyond the biological limits of the human being by him becoming contaminated by technologies and algorithms, an option which, in your view, endangers our propensity for empathy and collaboration. But don’t you think that it’s already too late, that the cyborg (to borrow Donna Haraway’s term) is already in us and that we are already considerably prosthetized and algorithmized?

I think the narrative that I really want to contrast is the myth of the survival of the fittest, which we’ve inherited from Darwin, and which has been used to much detrimental effect to explain the non-human world inaccurately, and within human society to narrativize an individual’s place within it by naturalizing a degree of comfort with inequality. Yes, we’re definitely all inhabited by technologies, and I don’t think I’d propose this is why we might lose our empathic capacities for others though. I think it could be happening as psychological resilience and the capacity to manage stress are diminished by the effects of living under conditions of relative scarcity. In the US, this might be an effect that is amplified by the way the system reproduces itself, often by making healthcare hard to access, whereas in Europe there may be more systems in place to diminish the extent of social and economic difference between people. The transhumanist literature is quite a long history, and Harari is not the most extreme example, but I was interested in an idea that came up in Homo Deus, which was whether these new humans that he proposes would have the same collaborative instincts as our current one. He suggests that one of the distinct capacities of humanity is its ability to inhabit fictions, for better and worse, and considers what is the root of our collaborative instincts.

Your practice deals with basic issues which seem to confront man with quite Cornelian and rather risky choices: the technological temptation versus a certain form of renunciation and asceticism to get us out of the quagmire towards which humankind seems to be heading. Knowing that it is thoroughly impossible to predict power plays which will come into being in future societies, and that human beings will, in their great majority, remain unaware of virtuous arguments, as long as there are more or less no constraints, don’t you think that it’s quite utopian to imagine a society which is becoming more self-aware, and that art can usefully serve this “cause”?

I’m not interested in art that leaves no room to imagine another world. The other world might use familiar materials and forms, whether sculpture or painting, or more recent materials like moving image and performance, but I do believe that art can transform us, and the way we literally see and feel and know the world. In a lot of ways The Arcadia Center project comes from a somewhat dark idea, about whether our collective empathic capacities have diminished to the point where we need to practice them, so I think dystopia is always nearby any utopian imagining.

For the philosopher Guillaume Logé, “the paradigms underpinning modernity and postmodernity must relinquish centre stage; the logic of domination, at the root of imbalances, must be replaced by a collaborative logic. Man no longer aspires to become master and possessor of nature, but a strategic planner and a diplomat”. We might say that this line of thinking, which conspicuously incorporates the place of art in this idea of renewing the paradigms, is perfectly attuned to your practice, but, to get mentalities to shift, isn’t it important to create spectacular events in just as spectacular places? What will be the new sacred places for exhibiting the masterworks of this “wild renaissance”, to quote the title of his last book1, who will produce the new Mona Lisa? Are museums and/or art centres the best placed sites for spreading these new visions?

Yes, I think that, to shift mentalities, we will need to use the tools of spectacle and tools that engage our emotional, affective lives for us to feel more critical. I do think certain projects really need a special place for drawing people into a new vision, and often these places are hard to access, the spectacular places in the world. I do think museums have a unique advantage in that they can really reach lots of people effectively, and so there’s a lot of good in this model too.

How are we to convey this experiential demand which you lay claim to, in your art? It isn’t always easy to get powerful messages across in a practice without these latter taking precedence over the aesthetic dimension of the works…

I like to take up the whole exhibition experience as a part of my practice, following in a line of artists that have developed the potential of the exhibition as form. As exhibitions are very particular ways of embodying knowledge in a spatial environment, I want to work with these aspects as they alter how a viewer feels within a given environment, considering these elements like a kind of choreography of the visitor. My recent shows have had elements of participation, which invited visitors to engage in a kind of praxis, but they also engaged with more familiar kinds of spectatorship that are used in contemporary art spaces. I think different visitors probably had very different experiences with the work, whereas some allowed themselves to be present as a participant, others might have prefered to remain one step removed as a spectator of the activity. The aesthetic dimension is of central importance, and operates underneath all of the embodied participation, as these sculptures, forms, images, and sounds are all critical for how a viewer begins to understand and learn how to feel about the world.