The Boat is Leaking. The Captain Lied. 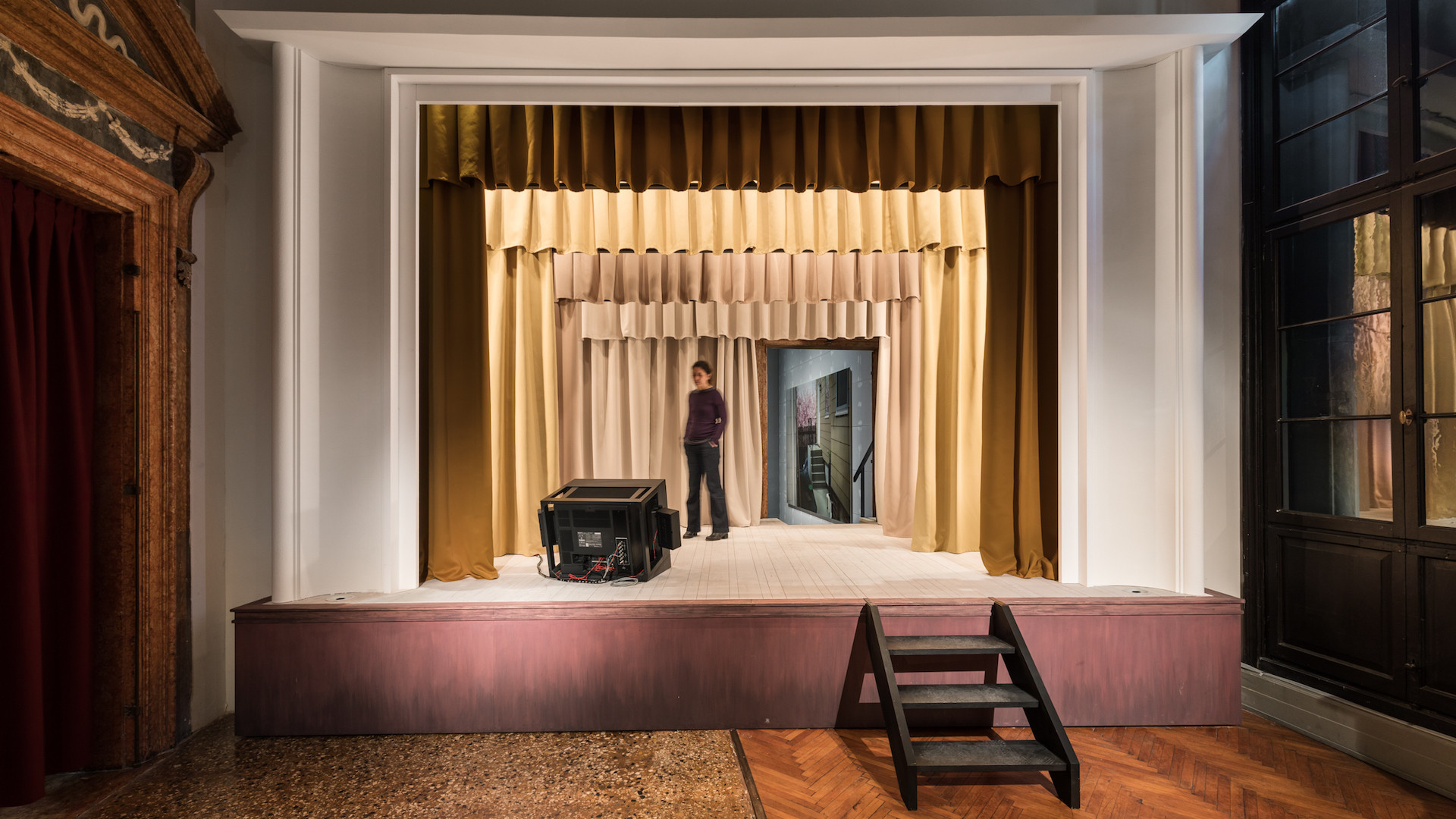 Where, for heaven’s sake, am I? This question accompanies the visitor through the exhibition “The Boat is Leaking. The Captain Lied.” which merges the work of three artists, working in different disciplines, into one big Gesamtkunstwerk. The photographic works of Thomas Demand, films by Alexander Kluge and set designs by Anna Viebrock, are spread over the three floors of an 18th-century palazzo at Canal Grande, in a show curated by Udo Kittelmann. Actually the three artists included works and artefacts by many more artists or filmmakers in their presentation. For instance a room with Angelo Morbelli’s paintings, from the late 19th century, some of them showing old men in a largely empty church around Christmas time. Lonely souls looking for God or solace. Then around the corner, one enters a space that has the benches similar to those in the paintings, but here they are real and physical, you can sit down and feel like being in a church. On small tablets, movie selections by Alexander Kluge are presented here. One of them shows a captain who is being interviewed, on the question if a ship has a soul, and if so, where it should be located? Other sea scenes will follow in the exhibition, as it seems to reflect on the state of current things in the world, through the metaphor of a boat and its leading man. Or lying man… 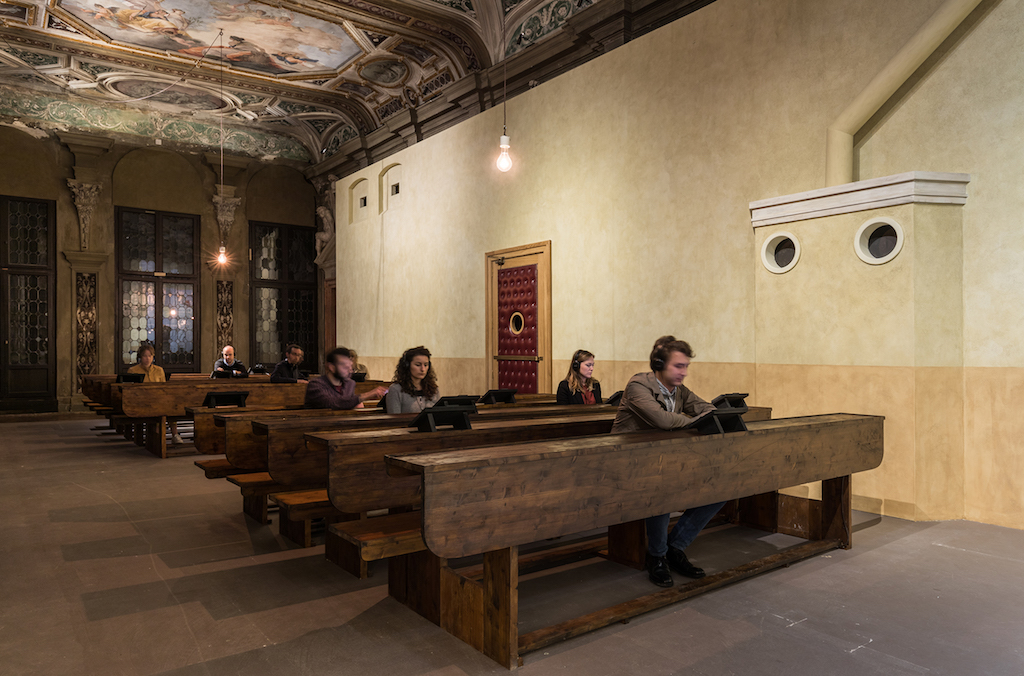 With each move, and transition from space to space, the visitor enters a new reality. On the first floor one arrives in a kind of office like entrance room, with five closed doors to choose from. I thus took the one that lead into the museum room with paintings, and from there the church room and then to a courtroom, and later an old style cinema, where movies such as Yesterday Girl (1965-66) from Edgar Reitz and Thomas Mauch are screened. Between the different realms one has to push safety doors, like on a ship. And each time, not only the presented works, but the whole stage changes, and with that the orientation of the viewer.

Through this approach the authorship of the artists becomes relative, the works are not presented as cases as such, works to be admired individually, but as part of a larger environment. And this actually changes the experience of the works. Looking at a solo exhibition of Thomas Demand at an earlier occasion had caused me doubts, because of the monotonous application of the same artistic method over endless subjects matters. Here his work becomes applied art in an interesting way — the image of a set of doorbells in the entrance room, or the window with metal work casting shadows, which hangs en passant in a corridor, they ignite the imagination and create an artificial double of the actual space. 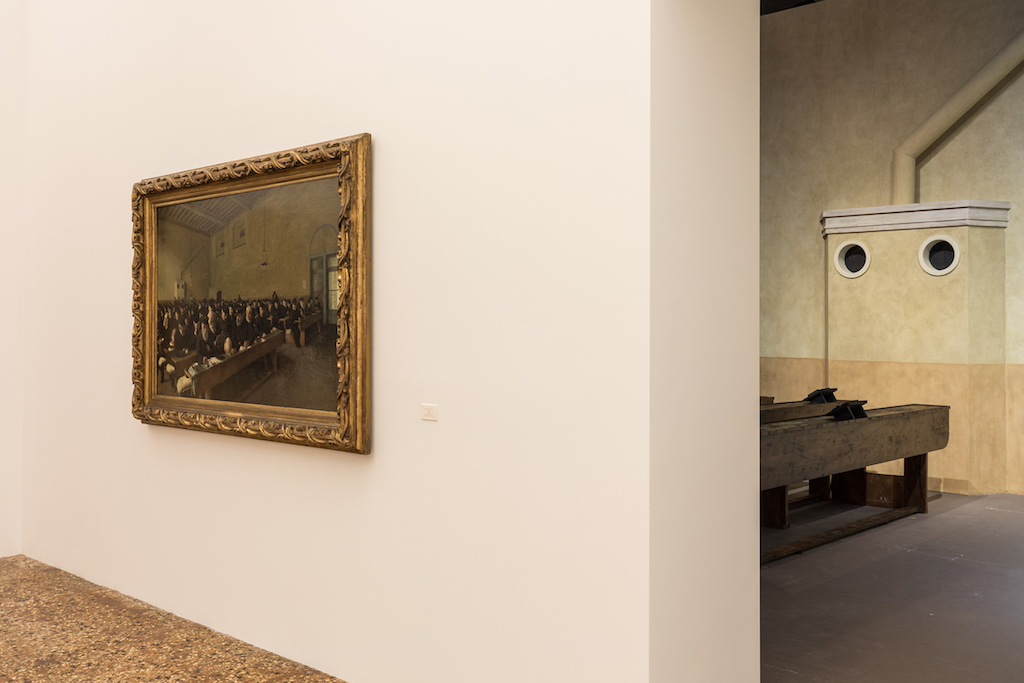 A light touch is provided in a video sequence about Terror = Fear and Horror, showing an interview with a fictional IS-lawyer who in a hilarious way comments on security measures at airports (“We are not inhuman, we also have fingerprints”). The movie is played on a monitor, placed on a theatre stage, where the viewer has to go up to watch it. Again a display that puts the visitor in the spotlight of the show.

The palace is packed with an enormous amount of visual material, a lot of it film and one could easily spend an afternoon if not a whole day watching everything. Consequently there are endless narratives that one could distillate from this exhibition, depending on the choice of movies one sees, and the trajectory that one follows through the show. On the top floor, for instance, I find a reflection on our economic system as it is based on giving loans and credit. It only works through the assumption that things will go on infinitely, a character explains, hinting at the fragility of the system. Meanwhile in the cinema some moments of an unstable love affair can be seen in beautiful understatement.

Zooming out of the individual works, the main topic of the show becomes the transitioning between realities and roles, the shifts in perspective. In this respect the exhibition is ingenuous and offers a unique format. It gives voice to many opinions and views, but never in one sided way, as it is part of a building full of reflections and stories. Of course we alternate through different spaces like cinema, court, museum, theatre, home in daily life as well, but here it is staged, condensed, intensified and fictionalised. It can be taken as an exercise to navigate as a captain of life, in times of wobbly weather.