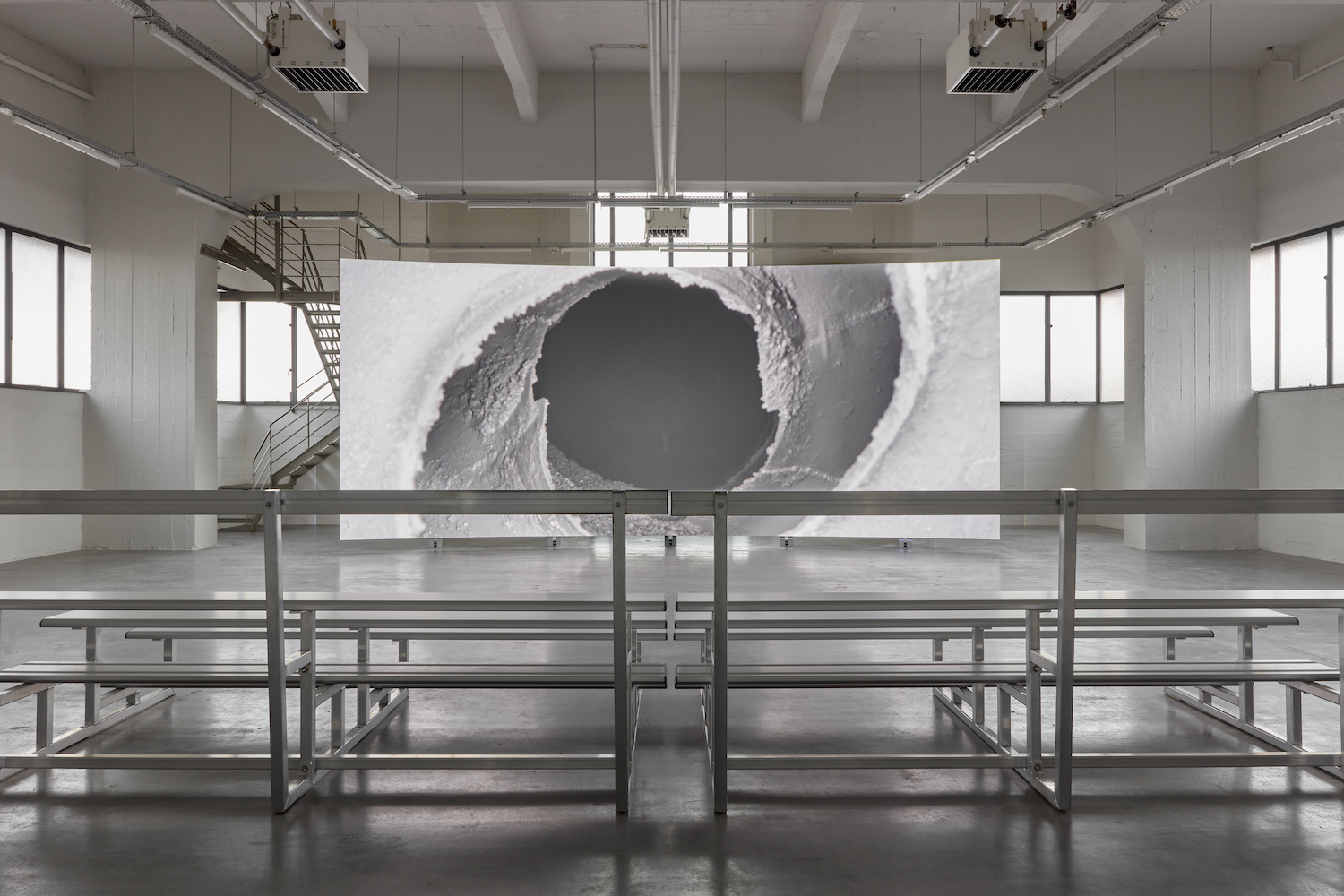 Raw and radical, Another Dull Day, Lucy Raven’s first exhibition in Belgium boldly takes on the spare exhibition space of the WIELS in the form of sculptural and minimalist structures which are composed of two screens and two aluminum platforms. The American artist, whose practise combines moving images, photographs, sculptures and videos, examines stories which have been silenced with relation to economic development and other pressures—on things, in the working world and on living beings—having to do with the landscape; specifically, that of the Western United States and its links over the course of history with conquests and exploitation. Raven’s work, presented here with a technical and curatorial meticulousness (provided by Hélèna Kritis), is shown in its best light in the ex-brewery; a gem of Belgian economy and also a showcase for reinforced concrete. Although the deserts where the films play themselves out may be far away, the architectural setting reinforces the issues raised in the images, which address materiality and industrial processes.

The first work is approached from the reverse side, and the portable structure with its imposing LED wall—located at the entrance of the exhibition—underscores the control mechanisms and surveillance methods of power that await us on the other side. Filmed in Mexico in the village of Socorro (which means “help”), on land which was initially used as a test site for explosives, Demolition a Wall 2 (Album 2) (2022) is impressive with the visual intensity of its sequences of explosions during nuclear and hypersonic weapons tests. Punctuated by the sound of the explosions, the montage alternates between black and white shots of the landscape and images which were recorded after the explosions, in which the colorimetry is inversed. These granulated images provide a recomposition of colourful and abstract psychedelic images on a black background which reveal the physicality of their digital composition. Through the use of a high-speed camera and digital aftereffects associated with scientific software, Raven creates a physicality for these variations which are invisible to the naked eye, such as changes in pressure, or in the way that light circulates in the air or in the heat generated by the impact. Slow-motion images which have been altered through the use of an algorithm leaves an impression of an anticyclonic wave sweeping us into the very heart of image formation. For the artist, who trained as a sculptor, images take on the quality of matter, and time takes on the shape of a kind of total structure (1) which creates the opportunity to reflect on the essence and creation of what is visible or what we think we perceive. The contours of the LED screen blend into the walls and the waxed floor of the exhibition venue on which the reflections of the images of the film flicker indistinctly amongst the shadows of filtered natural light. In this way, we are plunged into the physical experience of being in a desert in which we can no longer make out the limits, as well as into a hypnotic sensation brought on by the effects of the explosion, of an optical, super-technological aberration reinforced by the six-point surround sound system which diffuses a musical composition by Deantoni Parks.

In Ready Mix (2021)—the second work on view, initially created for Raven’s exhibition at the Dia Art Foundation in New York (16.04-30.12.21)—the visual choreography subjugates the viewer who finds themselves faced with the immensity of a curved cinemascope screen (with a 2:35:1 ratio). The black and white film which traces the production process of reinforced concrete, step-by-step, at a plant in Idaho, provides a feeling of movement due to the near-liquidity of the slow-motion images, and also to the surrealistic feeling of being plunged into a substance and the movements of the production process recorded via drone. The aesthetic here is similar to that of video surveillance, and bit by bit we become privy to a feeling of trespass onto a site around which a protective wall has been raised. A parallel can be made between this and the rapid construction of battlements and other similar border walls over history as the film touches on the material construction of private property and territorial appropriation. The concrete industry, which produces the most-commonly utilised construction material in the world, becomes the object of a critical stance on the human pressure imposed on the landscape and raw materials, resulting in pressures on the public and private political forces at the root of expansionism and extractivism.

A common thread exists here, which is the fluctuating state of different types of matter (gaseous in Demolition of a Wall and solid in Ready Mix). The transformation of constituents provides a backdrop for the exploration of moving images and the physicality implied therein. The artist is currently working on a new project which will address the liquid state, in order to provide continuity for these two episodes. In keeping with the close attention paid to everything from the recording of images and the way they are presented to the effect they provoke on the viewer, Raven also approaches the production process in the same careful way, emphasizing the economic aspect, as previous projects have shown. (2) The imperceptible phenomena examined by Raven’s works provoke a tension between processes and systems which are perceived as being unrelated; this in order to reflect on the global environment of the image. Seen through an exploitative lens, the artist’s point of departure is that of the appearance of certain dual phenomena such as the cinematographic industry and the conquest of the West. In order to take the parallel between the context of the preparation of concrete and Westerns (which made use of screens of this size) even further, the artist brings the socio-economical implications of the technical work of cinema to the fore.

At WIELS, these works which seem devoid of all human presence confront the visitor with the presence of other visitors seated on the bleachers as if they were actors in this reality. The images fuse with the space, which, like a Carl André work, engender time. These dialogues bring bodies into the exhibition, creating a physical and individual encounter with the explosion and the mechanisms of interdependence at the centre of which we find ourselves. Despite the dark reality at its core, the experience of Another Dull Day is far from morose.