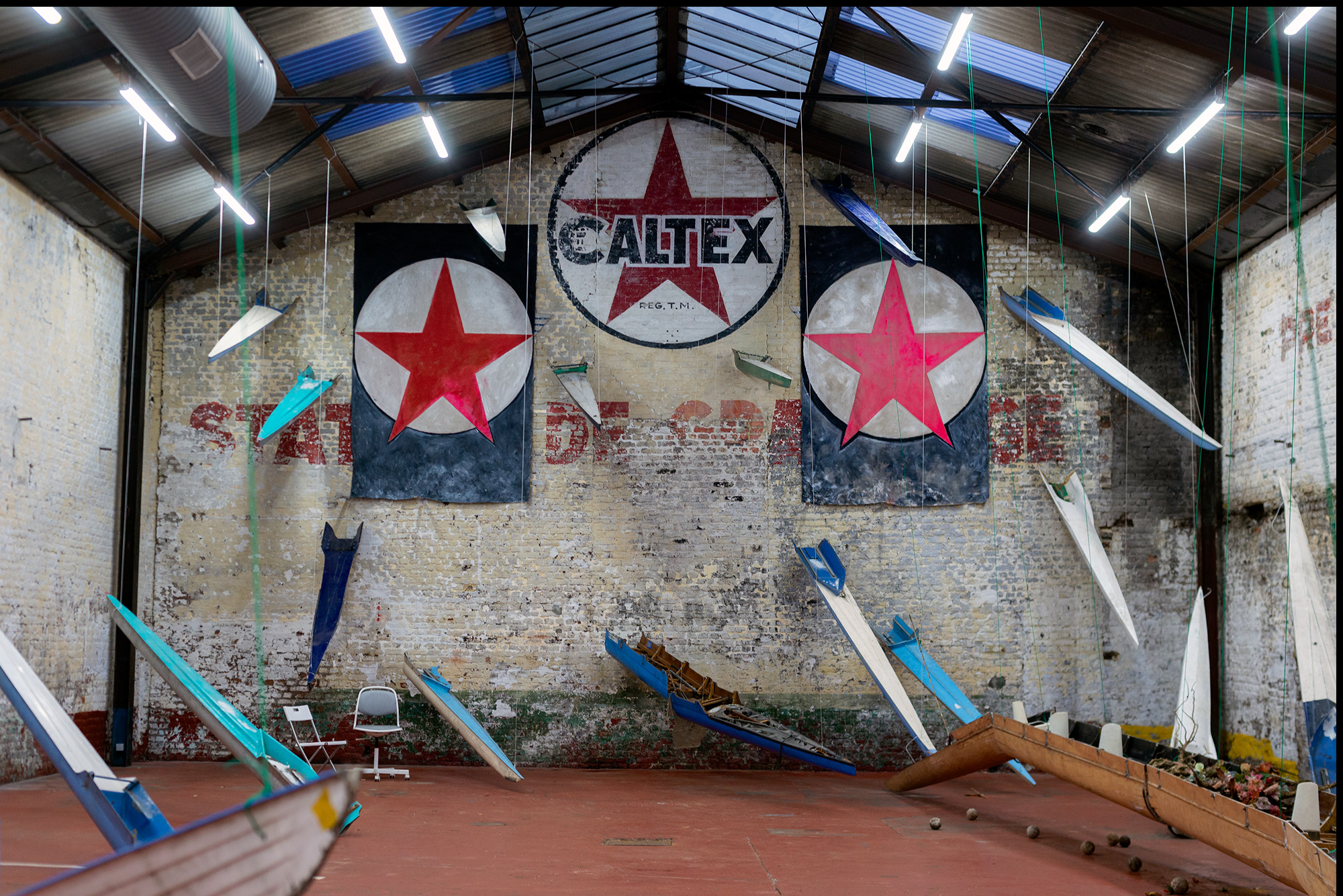 “Geographic tongue” is a mild and harmless condition. Red and white spots appear on the surface of the tongue and may change location and shape, disappear and reappear in other areas. It is a bit strange, but not bothersome. It is a spectral game that draws shadows and spots; that affects the idea of covering an entire surface intermittently. It is a spectacle: the spectacle of the tongue. This tongue draws the contours of a spoken geography, moving, slippery, without strategy and where, indeed, regions are woven in intersections. Relationships are established, of course, in and with the tongue. There would thus be a geo-cultural surface whose medians go from Toulon to Verviers and from Brest to Gruyère. An octopus meta-region with multiple centers where the rain of Binche would be next to the sun of Orange, where the carnivalesque monsters of the Pyrenees would join the motorcycle gangs of La Louvière, where the drizzle of Brest would smell like a Savoyard fondue. A tongue untainted by borders. And it would hold true without even crossing the sea or ocean. Not one of those things that would be pushed to transcend nations or what have you. Not a “study” but rather a place: a place where you chew, a place where you taste, a place of erosion and perfumes that stir the noisy and pink palate. A region that would have as many faces as there are ways to consume a mussel and yet it stumbles on these abstract lines, these organised fictions that are actually geographic borders. Instead of organising regimes and commerce, organising such surface and power into rights and infractions – all that brings us back to a capitalist, Darwinist and conservative feudality – borders should be perfectly blurred, inebriated, twisted and hovering. A border should not be an object. It should be a feeling. Something like the first mixtures in love, and in the evening your girlfriend saying: “So what, you put your tongue in it?”

We won’t find cultural geography, we won’t even try: it would surely be fake. It is not a “strict” language that we are speaking of, it is not “only” French, which is the official language of thirty-seven countries in the world and is spoken by three hundred million people. This may sound “Eurocentric” to you, okay, it is, but it’s not a market study, not a congregation, not even an association. It’s more like a landslide. Beyond “meaning”, beyond signs, beyond alphabets, beyond the “Frenchiz” section of the convenience store, beyond Alain Bashung, Romy Schneider and Delphine Seyrig, there is something. Something that we do with the tongue.

About twelve years ago, artist Jacques Lizène improvised on the TV host Thierry Ardisson’s set, making a spectacle of one of his shit paintings.[1] Ardisson pretended not to recognize him although had been in one of the episodes of Paris Dernière in 1996. Gallery owner Sylvana Lorenz was very amused. Most of the guests winced, held their noses, and Lizène was kindly dismissed. The recent death of Lizène – a key figure from the Liège art scene who founded the Cirque Divers in 1996 with Michel Antaki and others, and who marked the artistic scene well beyond his city – may have sounded the bell of a turning point. He always demanded that his name be included in the Petit Robert under the word “mediocre”, among other intelligences. It was not a calculation, it was not a condition, it was not a strategy; it was simply that the crossings, the weavings, the relationships were tied up far from sociology, far from any science, unless we consider a science of the Other. Lizène incarnated this tongue in the middle of the Nineties: he entered a bistro of Nantes to meet the curator of his exhibition at Zoo gallery and his first words were: “A round on me!”

At the end of the twentieth and beginning of our century, there were about a dozen rather joyous years, joyous with various rebellions that mixed reactions to the injustices of racism, unbridled capitalism, the effects of AIDS, the lack of recognition of a series of marginalised communities. These twelve years begun with the fall of the Berlin Wall and lasted until the fall of the Twin Towers on September 11th, 2001 – the fateful day that announced a moral and artistic regression when the president of the United States, Bush Jr., declared the return of the war of civilisations. Until then, black blocs, pink blocs, raves, gangstas, grunges, fags, dykes, dockeurs, show-offs, wankers, unemployed people, alternatives, ecologists, squatters were intermingling, shot up with explosive doses of internal contradictions in a big anti-G: G7, G8, G12, G20, etc. What followed was a world of wars, repressions, elements of language more twisted than the winding of a serpent in a puddle of oil. In Amsterdam, London and Berlin, as everywhere, squats were closed and the far right took a new turn. And we are still here, struggling to see – time and again – what forms individual, social or institutional ideas associated with emancipation could take on. We are still looking for a word that could define the obsolescence of the conflict reality vs. fiction.

It was at that movement in 2002, just twenty years ago, that Alain De Clerck produced SPACE (Sculpture Publique d’Aide Culturelle et Européenne, or Public Sculpture of Cultural and European Aid) in Liège, under the windows of the culture councillor’s office: a large metal tube in a semicircle, activated by a parking meter that spits out a flame each time a coin is slipped inside, and offers a poem in the guise of a receipt. The profits made from this work were donated to the constitution of a collection. That was the beginning of the Space Collection. An identical flame was placed in Maastricht, and the collection has not given up on placing them in other cities.

Just in front of 251N – a historic contemporary art space run by Laurent Jacob in Liège – and the neighbouring the Ravi residencies, the New Space opened just over a year ago, transforming the city’s police garages into an art centre. Like artists such as John Coplans, founder of Artforum, Alain De Clerck has not displaced his practice, he has augmented it with what the organising of exhibitions and events, the collection and the relationships – often conflicting with political authorities – could wield of engaged poetry, forms, participations and alternatives. Alain De Clerck notably went on a hunger strike when the city broke one of its promises, which was to offer the former dental clinic of the Bavarian hospitals to Space. A diluted art practice. No inframince2, no calculation, but rather an attitude of unlimited generosity. The collection now numbers some one hundred and thirty-five works and is on display in various museums and institutions. It is a rare example of a popular collection, financed largely by the public, managed by the association, and which constitutes a meeting place as well as one of work and reflection.

In parallel to the exhibition “Gifted by Nature” last September, we organised a discussion between Sarina Basta and Vinciane Despret. From Vinciane’s seemingly inexhaustible, twirling tongue – she who has the art of thinking while speaking, of making her sentences dance in the gestures like a giant butterfly – we heard: “So the middle road is a way of gently bringing people to think that things can be different from what they thought until now. If I say, ‘This flower invites me to breathe in its scent,’ who acts? Today when we read some ecologists who study flowers, we realise that there is much more power to act and capacity to exhale in a determined, perhaps unintentional way, in flowers than we imagined fifty years ago. It is in this sense, that this sentence came to me: ‘There are territories that only want to be sung.’” Here I give the territories their power to act because I can interpret this syntax in two different ways. They desire to be sung and this “they only care about” also means that there is an arrangement: they stay together like the rabbit-duck illusion3.

And turn it any way you want: “beer” – let’s say that here this word could cover a lot of distilled or fermented products that force conviviality – is at the heart of it. These liquids and juices that unravel the word and into which one falls – as one falls in love, as one stumbles, as one gets lost. Few institutions admit it, even fewer declare it, and that’s a shame. We should be at a point where the hypocritical detours no longer exist, Mr. Priest, Madam Mayor, dear elected officials, dear director, nah nah nah! Alcohol, sex, drugs, dancing, food, the humanity that spreads and wallows, whether on all fours or with a glass of champagne in hand, is one of the most vivid behaviours in this generation of projects, ideas, associations, of setting in motion of all kinds. Of course, we can make the formula softer: talk about economy, kindness, special attention, but it will never be more than a variation of this thing that hits us in the face: a beer or a tongue. A cycle. Like the figurine in the nativity scenes in Barcelona, the caganer, literally meaning “the one who shits” and who represents the natural cycle of creation. Lizène, again, would have said: “Oh, a painter!”

It would be very difficult to make a kind of inventory of this geography which deafens the state borders, this geography trembling of laughter. One thing is certain: the other night, at the Bar du Canal, we were with some Bretons. Artist Isabelle Arthuis, whose Breton iodine makes her arteries pulsate, declared how much Wallonia – and Liege in particular – were associated in her mind with something extremely human, shared, and not explicit. Similar to the enthusiastic flight of a winged barrel. I don’t know if there is anything to formalise from all this, from all these relationships that are formed in the simple fact of being there: perhaps a carnival-coloured factory of influences. In reality, it is a nerve, a freewheeling story, a general round.

In 1989, a wave of UFOs spread over Belgium. Police noticed luminous objects floating in the sky and hundreds of testimonies were collected. A few months later, two army F16s were sent to pursue one of these objects and one of the plane’s radar officially detected the presence of an unidentified flying object. It is rare, if not unique, for a state to make such a finding official. The official book of all the testimonies of the time was prefaced by Belgian philosopher Isabelle Stengers. This wave of UFOs lasted for two years. We were there, we remember: the cities of Eupen and Malmédy were better than a Spielberg. And even if today some people still speak of collective hysteria, we see it as an augmented landscape, an immaterial and scathing piece of our collection, a collection from elsewhere, because yes, from here, from there, we were and still are there.

2 An aesthetic concept developed by Marcel Duchamp that designates an imperceptible difference or interval, at times only imaginable, between two phenomena. (wikipedia)