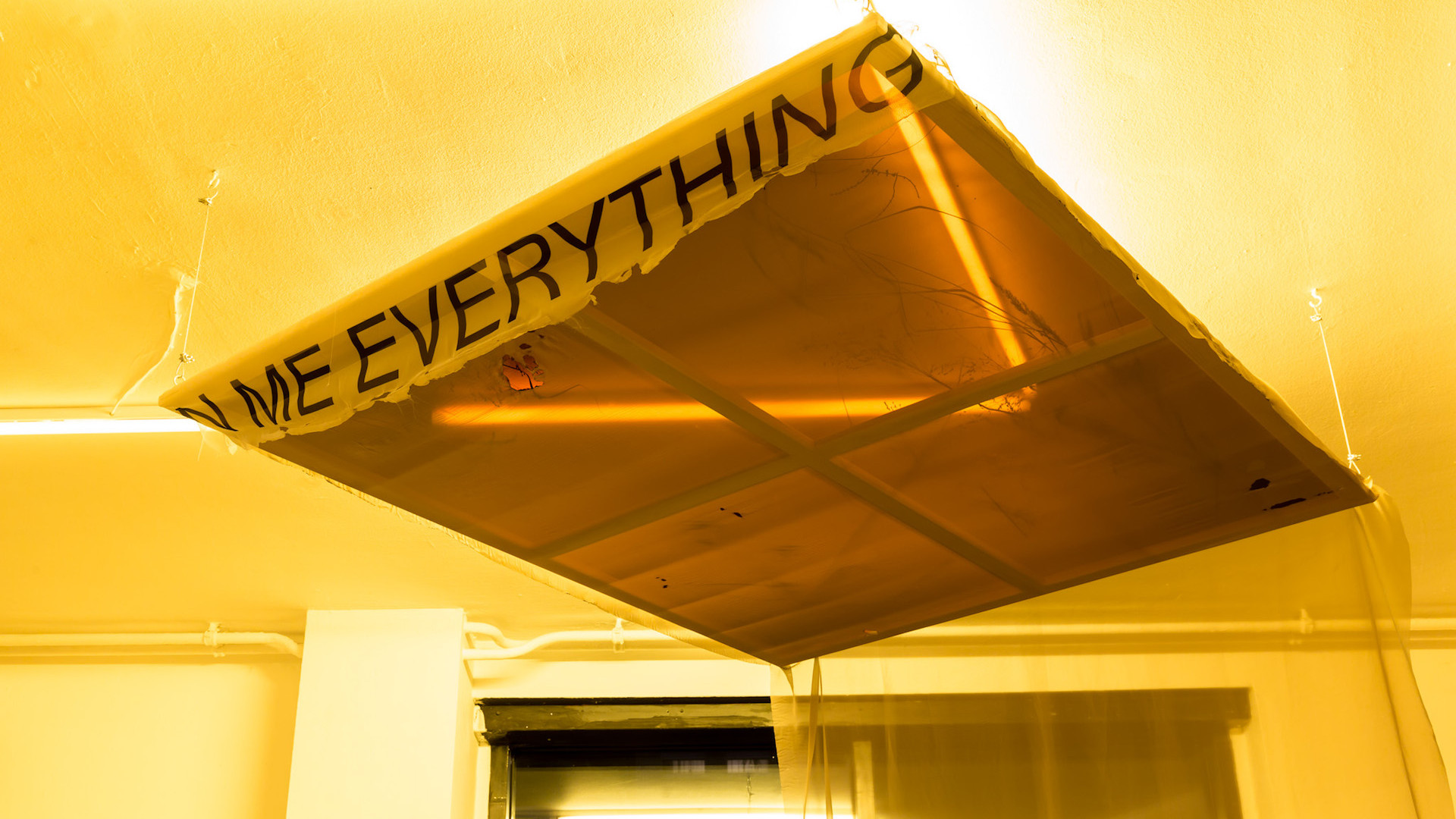 The problem is that we don’t know whom we mean when we are saying: “we”. From Paul Maheke’s environments lulled by a symbiotic lapping, these words emerge, spreading and altering through his last three solo shows. Berlin, London, Paris: three parts like so many echo chambers in a row, where the clamour grows as the letter dulls. The sentence originally appeared printed on a piece of fabric stretched over some iron rods: “The problem is that we don’t know whom we mean when we are saying we”, we thus read on one of the works in the exhibition “What Flows Through and Across” at Assembly Point, in London. Cut clean at its edges, the letter already escapes, indicating that what is essentially happening is moveable, on the sidelines—re-engaging the flirtation with the “parergon”, the edge of the frame, dear to the Derrida of The Truth in Painting. After a spell in the Center project-space in Berlin with “In me Everything Is Already Flowing”, the project’s final stop was in Paris. At the Sultana gallery, where “Acqua Alta” was held this spring, the “we”, this time around, evaporated a little bit more. The sentence acts as the title for one of the pieces which, in a transparent cube set on the floor, presents parcels of next-to-nothing. But among all the next-to-nothings which art is mad about, we must be more specific: this particular next-to-nothing is egregiously contemporary, managing to conjure up the stuff of time in a few leftovers of synthetic hair and streaks of resin. 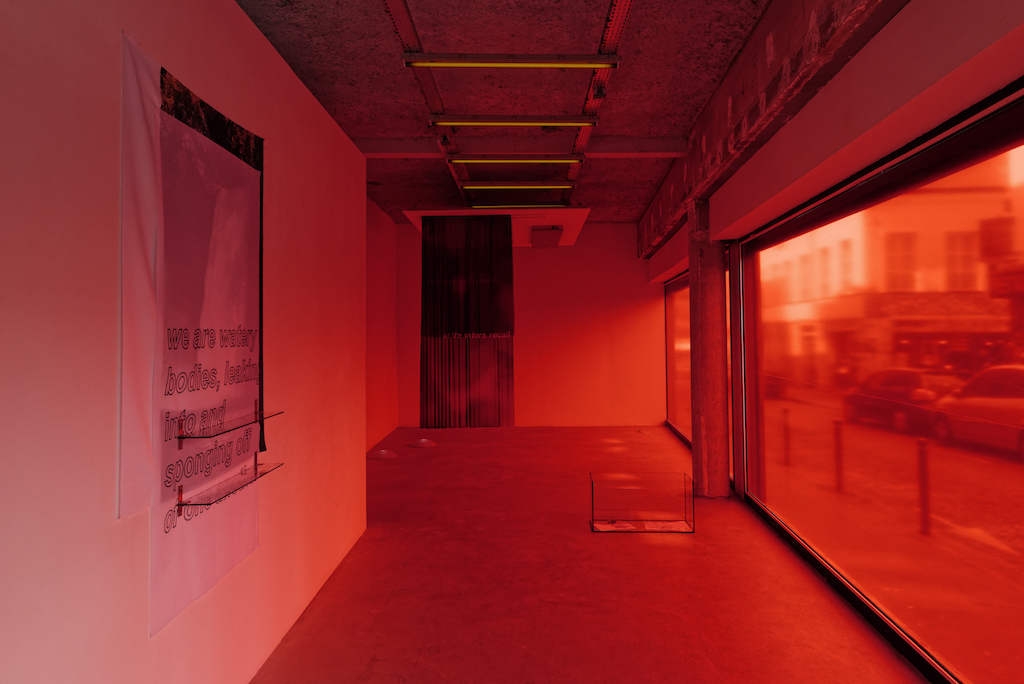 Paul Maheke talks about new augmented and de-territorialized identities. About post-industrial plasticity and the subjective geographies of a fragmented and precarious “we”, which perhaps itself does not experience itself as such. Born in 1985, trained at the Cergy School of Fine Arts, and passing by way of Montreal before settling in London, where he has lived and worked for the past two years, the artist is heir to a whole corpus of theories which appropriate notions of otherness and exoticism. His personal itinerary, moreover, tends to reflect their circulation: from the hegemony of French thinking in the 1970s, from a corpus organized around great masters such as Michel Foucault, Jacques Derrida, Gilles Deleuze and Felix Guattari, we shift imperceptibly towards the Anglo-Saxon hubs of the 1980s and 1990s, less connected to a place than to a globalized idiom, the English language, from which emerge various landmark—and stellar—figures: Judith Butler, Gayatri Spivak, and Stuart Hall. Paul Maheke holds on to “good fairies” from this migration, active powers whose imprint can be seen in his vocabulary: “Some authors, male and female, have been following me for a long time: Audre Lourde, Derek Walcott, Paul Preciado, and Susan Sontag, but also Georges Bataille and James Baldwin”, he admits, before hastening to specify: “I always make sure that these references do not confine or prop up too closely the line of thinking that has seen the works emerge. I very often use a deliberately elliptical, almost poetic register and manner of address.” Because the strength of his register does indeed lie in the fact of trying to update the feminist and post-colonialist legacy which, without denying its scope, has on the one hand been formulated in a period which is no longer ours, and, above all, has ended up being transformed in turn into authoritative arguments. 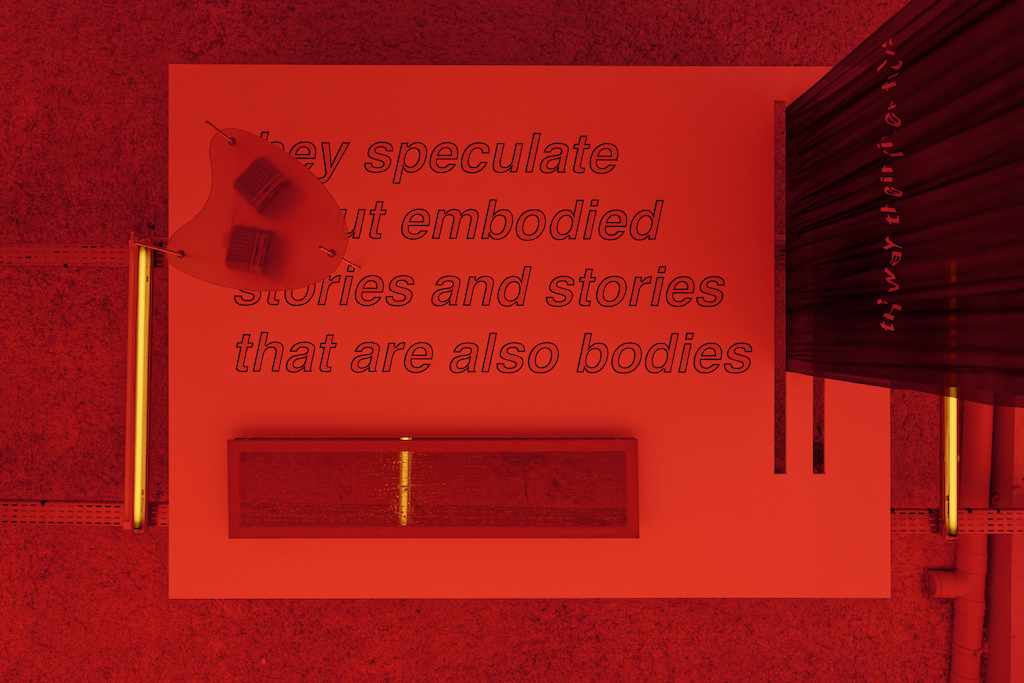 “The words and thoughts which define my work start from here, and I am always very explicit about this when I am asked to speak. But what interests me is, above all, reformulating these arguments and thereby opening the way to new prospects within my praxis”, he explains. Whence the intervention in his latest cycle of exhibitions of a new corpus, at the same time as a new visual trope, in order to try and escape from these motifs, while simultaneously “developing a new lexicon for thinking about identities outside of identity politics”: water. And more precisely, aqua-feminism, a poetic-cum-philosophical movement discovered while leafing through a text by Astrida Neimanis. In her book Bodies of Water (2017), the Australian academic, fuelled by the writings of Luce Irigaray, Maurice Merleau-Ponty and Gilles Deleuze, develops a feminist post-humanist phenomenology, seeking to re-include the body as much as possible in a continuity with the environment. As we can see, it is difficult not to re-plunge into serial labelling to describe this new sensibility. The expressive range of her work, which constructs an imagination rather than a conceptual architecture, can be gauged by visiting the Sultana gallery: the space is awash in an amniotic red glow, fluid hangings erase the right angles, and, if we are to believe the droplets lying on the smooth surfaces, everything is already in the process of liquefaction. “Making reference to water—an element which surrounds and forms our bodies—as a form of feminist, political and poetic matter, is obviously a strategy which I have adopted to define other ways and viewpoints for talking about these disempowered bodies, without stumbling into the pitfalls of victimization and exoticism.” 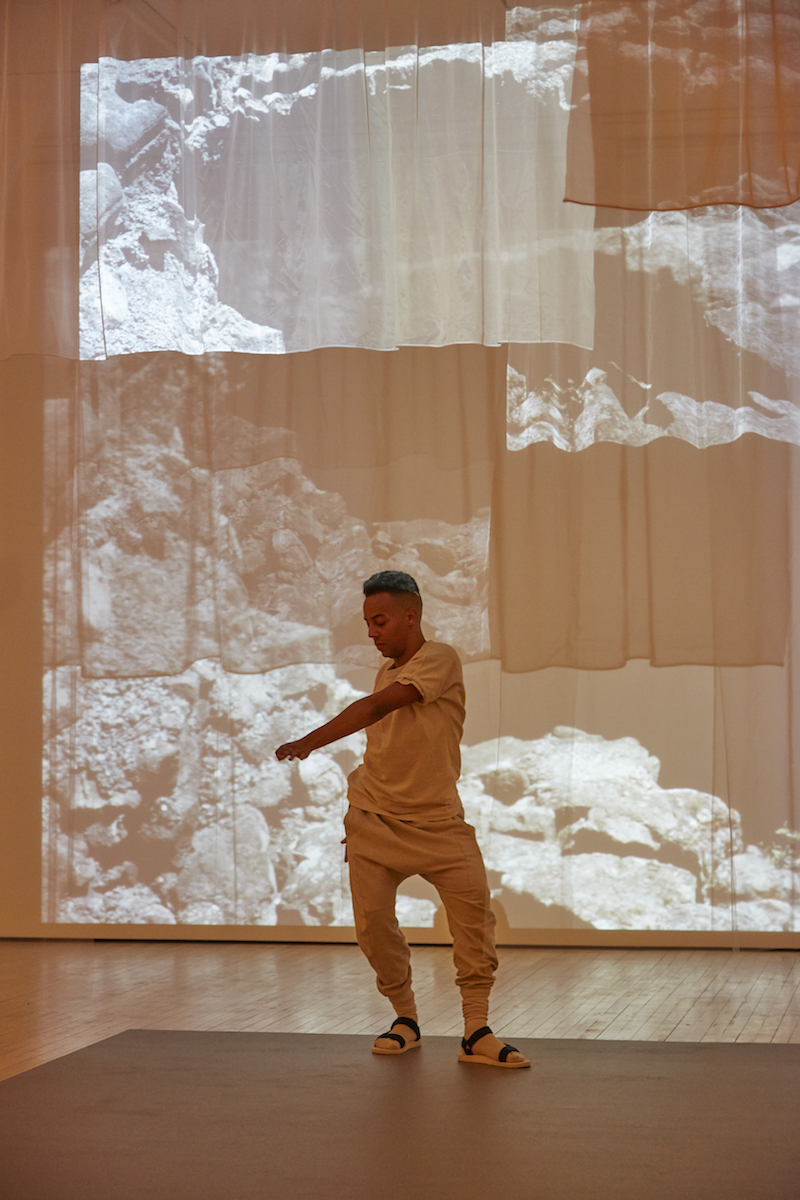 Let us go back to the red glow just mentioned: enveloping like an amniotic fluid, but also like the inactinic lamps of photo development laboratories. There, in the dark room, the image is not yet fixed; immersed at the bottom of the tank, it remains suspended on a possible future, still indeterminate. With Paul Maheke, what is striking is also the absence of images. Unlike many artists of his generation working around the theme of identity, the treatment does not proceed by way of hybridizing and appropriating already existing images. As a self-taught dancer, performance accounts for a predominant part of his work, and also shows through in the way he conceives his installations—which, let us point out—work in an autonomous way without depending on any possible activation. More than the production and circulation of images, it is “systems of thinking and politics” which fill out the reflection of an artist who says he is “almost exhausted in front of images, and even more so by what they bring with them”. He goes on to explain: “I try to do things in such a way that my praxis sidesteps certain tropes; because the Black body is often represented through a history of violence (slavery, colonial projects, urban and domestic violence, poverty, and so on); because these tropes bolster obsolete and at times oppressive cultural constructs; but also and above all because they reassure us – even if, when I say ‘we’, I’m not absolutely sure I know what I’m talking about.”

Whence this presence of the text-image which, if the truth be told, is neither one nor the other: neither text nor image. Folding, bending, cut or immersed, the writing is an “archi-writing” in the sense which Derrida—him again—gave it: an archi-writing which is that of the trace, before the arrival of the word and the logocentrism which it inevitably entails; which opens up a spacing out in time and in the word, as well as an openness to the first exteriority encountered in the figure of the other. “The texts, in this series of three solo exhibitions, played a fundamental part. I wrote some of them and borrowed others—from Luce Irigaray and Astrida Neimanis. Here it acts more like a way of opening the work up to a series of possibilities, and to other places, elsewhere; something which almost has to do with the emergency exit. I always try to do things in such a way that these quotations and fragments are visually interesting. At Sultana, and, incidentally, in the three shows, the sculptures are almost pretexts for those texts to appear. They have the function of display and container to be able to show these words.” Less determined by the collective imagination, the text, like the performance, makes it possible to leave ajar the door of a type of comprehension which is no longer cognitive but emotive, sensual and poetic. Rather than representing, it is thus more a matter of expressing; experiencing rather than understanding—or at the very least of “only trying to understand after having already experienced.” 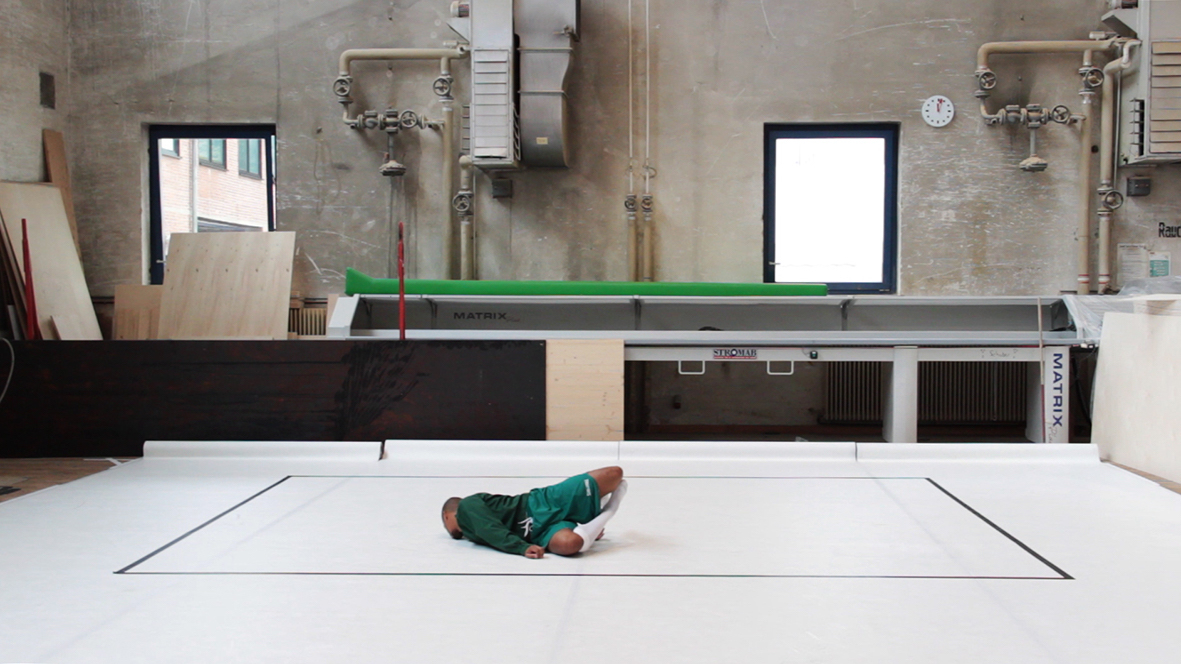 Above all, this fragmentary writing, which proceeds by circumvolutions and lurks in the margins, immediately forces us to undertake a certain circuit in space. Unlike images, and even unlike the three-dimensional material nature of sculpture, writing forces us to look closely: even when it is deconstructed, the sentence makes us decipher it, whereas a circular way of looking, scanning the piece, is enough to embrace a non-textual panorama. Cast on the floor and ceiling and in recesses, Paul Maheke’s textual prints also oblige the viewer to become aware of the experience of a space. For, needless to say, these stories are already incarnated, as we can read by raising our heads: “They speculate about embodied stories and stories that are also bodies”. This datum of an already penetrated space of networks of power and knowledge, of motifs of exclusion and violence, which acts like a back drop for the perception of a work, whatever it may be, traverses all his projects. “The very pragmatic question of how to avoid or attenuate these forms of social violence which assail me everywhere else, already, and also operate within the white cube, has prompted me to reconsider the conditions in which I show my work. It was at a time when I was performing a lot, for institutions and art venues where the audience is predominantly white. Those situations have sometimes given rise to a certain violence (social and metaphorical) which I hadn’t anticipated.” 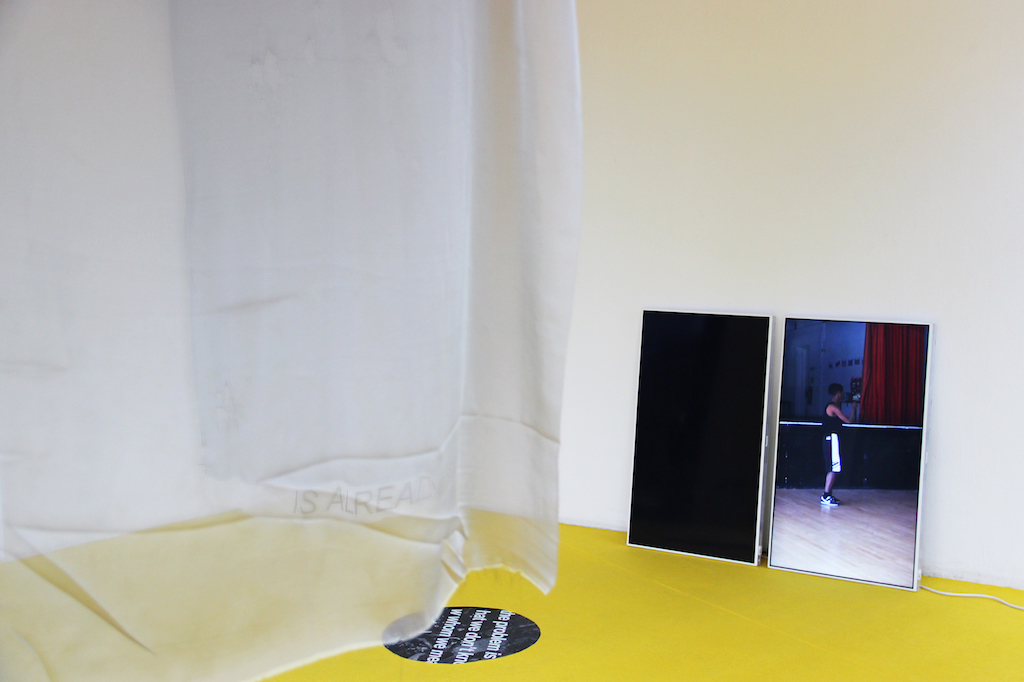