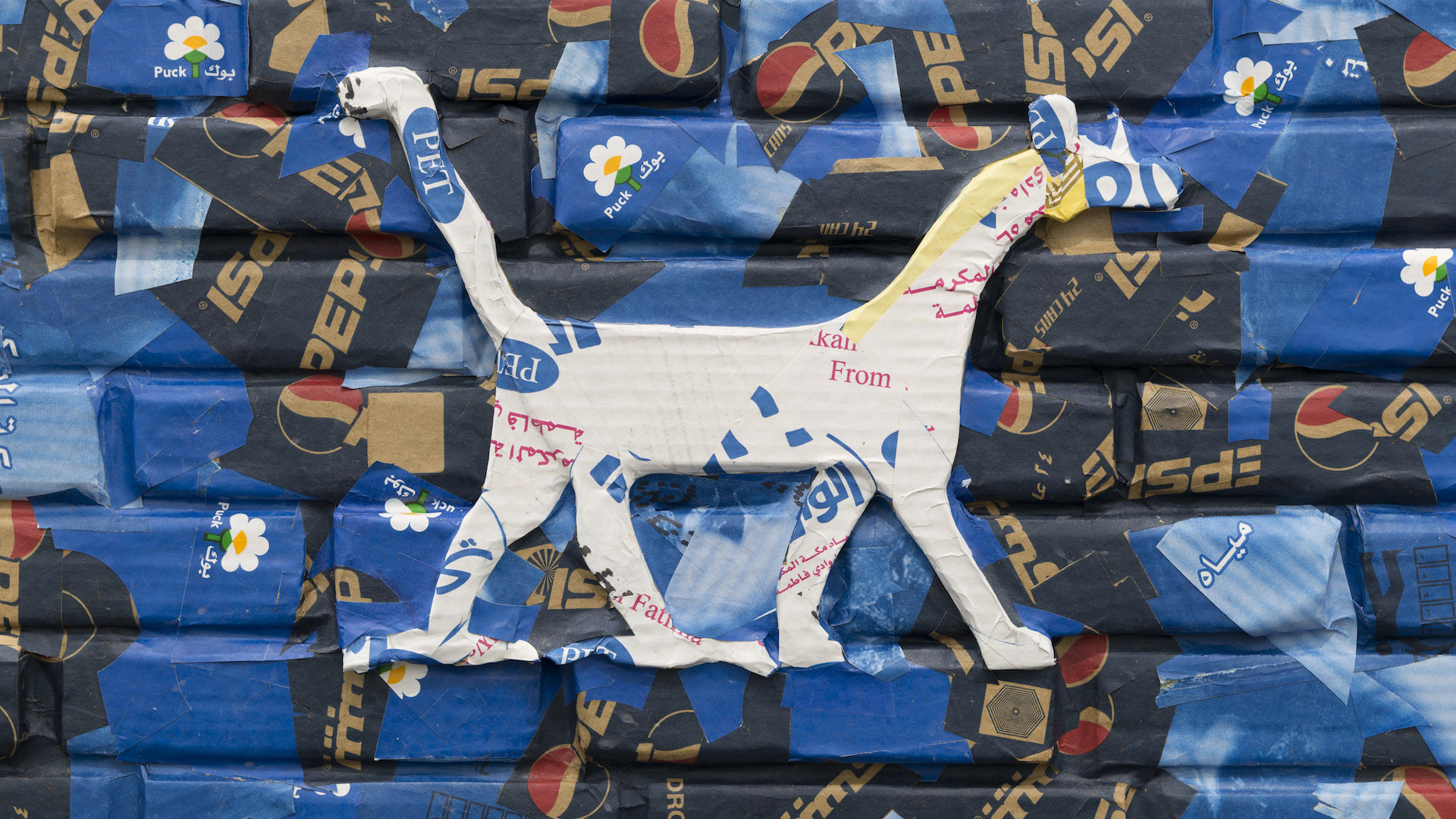 Google Translate is to language what Instagram filters are to photography. By adding interference to the initial message, it becomes possible if not to feign mastery, then at least to set content in motion. So the message is not addressed to the recipient, it is tossed straight in his face. Based on this cluster of tangled signs (linguistic incoherences; over-saturated imagery), it is up to him to find ways of rediscovering a meaning, any meaning. The connection works, but does not get beyond the phatic function of language—its social interaction—as identified a while ago by the linguist Roman Jakobson. When we transfer a google-translated content, all we are doing is checking that the communication channel is functioning. As for what it was initially intended to get us to see or hear, the mystery remains total. The title of the Michael Rakowitz exhibition at the Museum of Contemporary Art [MCA] in Chicago also gives verbal expression to those calls into the void, those anxious “hallos?” which ring out in the mediasphere, without anyone ever picking up the phone. So the enigmatic “Backstroke of the West” already harbingers the clusters of translation and transfers based on which contemporary transnational narratives are woven, perforce studded with holes and knots. So what might “backstroke” refer to? In good English the swimming term urges us to immediately get away from the well-beaten tracks of the OED. On the other hand, we should clearly understand in the term its literal breakdown, to wit a “stroke or blow from behind”. A stroke from behind aimed at the West? Its decline, then. With the slight difference that the artist has in reality borrowed the adulterated translation of a pirated Chinese version of Star Wars. In the original English: “The Empire Strikes back”. The West’s comeback, then? Rather a third way, neither West nor East. 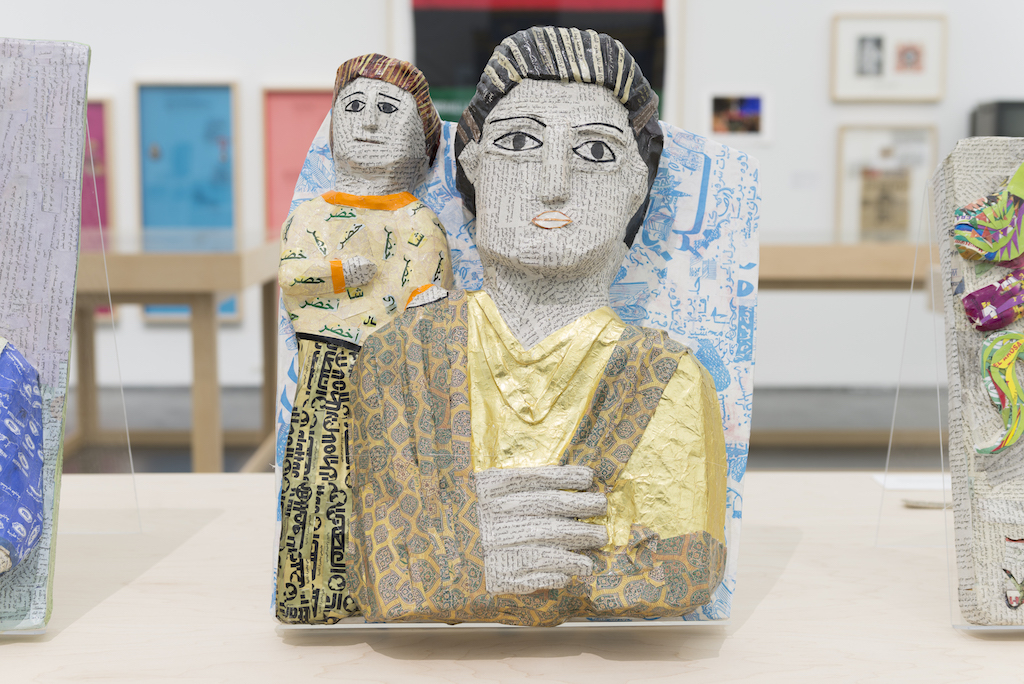 Why this lengthy diversion through the endless arcades of Google Translate? In addition to the obvious issue of cultural transfers, Michael Rakowitz also often proceeds by way of synecdoche, a figure of speech where a part is made to represent the whole. A blockbuster title badly translated into Chinese, and it is the stronghold of American cultural imperialism which teeters. A Middle Eastern can of Pepsi beside an Iraqi package of Lipton tea, then others and others still, and what emerges is a monumental re-construction of the Ishtar Gate in Babylon. Titled May the Arrogant Not Prevail, this 2010 work has pride of place at the MCA, where the decision has been made to bring all the works together in one and the same room. Initially shown in the “On Rage” exhibition at the Haus der Kulturen der Welt in Berlin, the work is part of a long-term series begun in 2007: producing a 1:1 copy of each one of the 7,000 or so archaeological objects in the National Museum of Iraq, which was looted when US troops entered the city—with those same troops being subsequently accused of having done nothing to prevent that plunder. By including in the series the Ishtar Gate which once stood in ancient Babylon, whose archaeological site is situated today not far from present-day Baghdad, the artist subtly links the most recent pillaging to other examples, this time committed by European and in particular German archaeologists, who took whole artefacts and monuments back to their country at the turn of the 20th century, and are still lending a deaf ear to the claims being made by the governments of the countries of origin.

The invisible enemy should not exist adds a layer of meaning to this already complex history. The series is actually a direct commentary about attempts made by 3D technology to re-create the stolen items, an endeavour eagerly adopted by western countries in the wake of the plunder. The fact is that, for Rakowitz, whose mother’s family hailed from Iraq and fled the country in 1949, these efforts are merely another form of colonialism, using the resources of state-of-the-art technology to carry on the appropriation of archaeological treasures by the West. Seen as the cradle of civilization, Babylon is thus the example of the re-appropriation of not only the material legacy but also of the historical narrative of one civilization by another, in the guise of protecting a universal heritage. Its own replicas duly illustrate the impossibility of reconstructing and reinstating; they stem from a form of “soft copy”, an imperfect synthesis where there still is a clear distinction between each of the parts and the whole. These various pieces of packages do not camouflage their origin; the Pepsi and Lipton logos and the scraps of newspapers remain identifiable as soon as we get closer to the image of the reproduced artefacts—a statuette, a mask, a cooking utensil. The originals obviously do not come up to the mark, and all the more so because the artist has reproduced them from the picture library of the University of Chicago and the Interpol site which lists stolen objects. 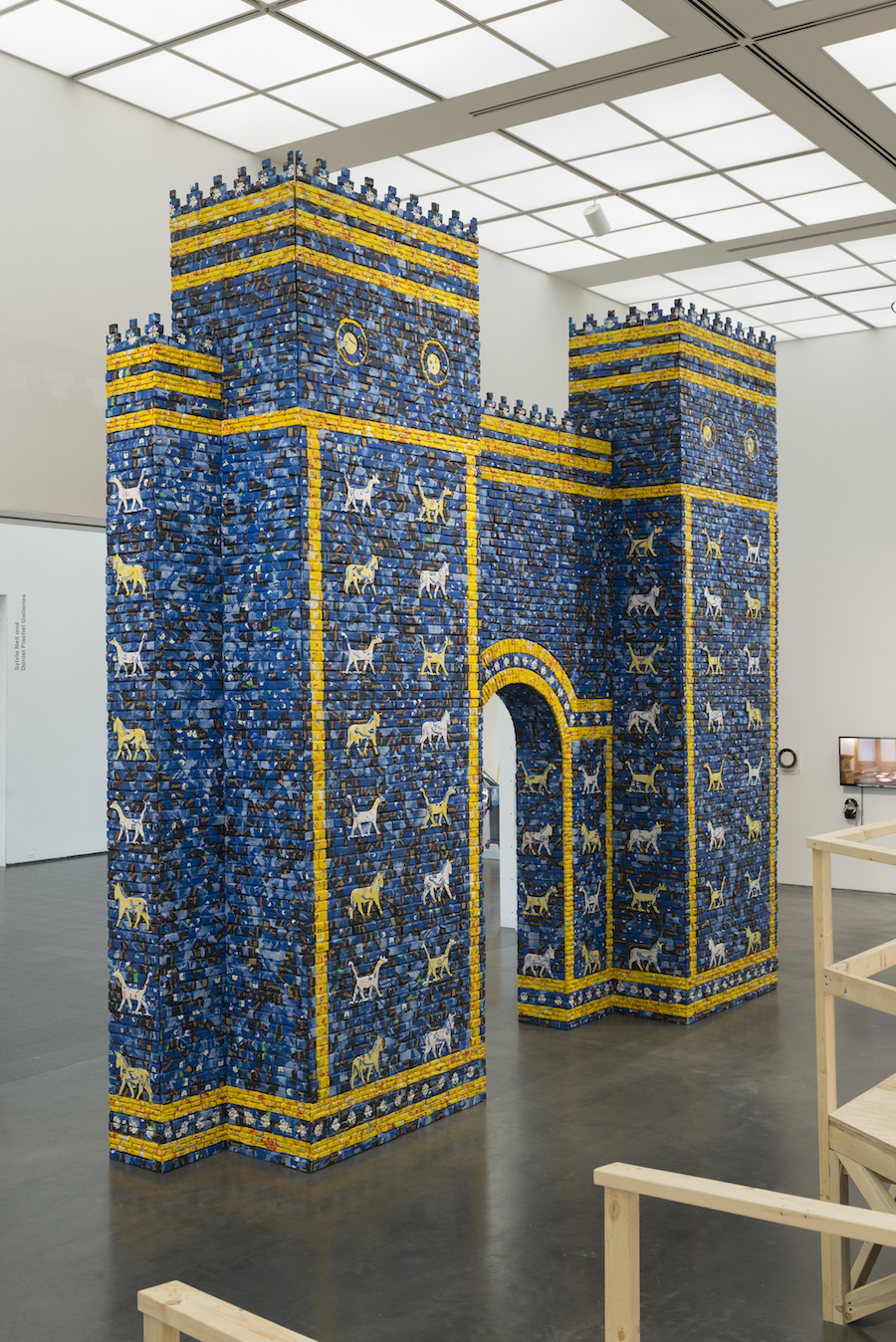 The works in this series construct, to echo the words of the academic Homi K. Bhabha, a “differential structure”. Rather than identity, what is involved in Rakowitz’s work comes from identification: this latter is, first and foremost, and in the most evident way, a process for producing things together, but it is also without origin. As such, the artist’s body of work can be compared more with Homi K. Bhabha’s theses about the “third space”. In The Location of Culture (2007), this latter proposes studying the hybrid nature of cultures from the angle of a “politics of polarity”, where the individual moves about in a space that is being forever reconfigured. So the boundary no longer appears as the insurmountable wall erected between “them” and “us”, condemning to perpetual exile anyone who might be excluded or not keen to conform. On the other hand, this third zone anchors the concepts of “différance” and “deterritorialization/ reterritorialization” posited by continental philosophy (respectively by Derrida and by Deleuze & Guattari) in post-colonial reality, setting up an effective reality as a desirable model: the contemporary individual incarnates a radical singularity, henceforth living detached from and unconnected with any pre-defined overarching group to which he might attach himself.

In perpetual transit between Chicago and Baghdad: pluralizing the tradition of social practice

This Michael Radowitz retrospective is his first on American soil, after being so honoured by the Tate in London in 2010, which offered him its walls with the solo show “The Worst Condition Is To Pass Under A Sword Which Is Not One’s Own”. “I have always been deeply immersed in the way that Rakowitz examines the relationship between hospitality and hostility and negotiates that fine line, finding a way to show us our complicity in the everyday political realities in which we live,” explains Omar Kholeif, the exhibition’s curator, and director of the MCA’s international programme. “I had first seen Michael’s work in the Sharjah Biennial in 2007 and subsequently followed it around the world in exhibitions from Documenta 13 to performance and food events such as Enemy Kitchen and Dar Al Sulh, which were held in Chicago and Dubai respectively. Before I arrived at the Museum, I proposed to our Director that I would like to work with Michael on his first retrospective. It was long over-due. Chicago is where he lives, but he is a global artist who truly speaks to the direction that the Museum was moving into, and it felt absolutely urgent to mount.”

You make your way into the exhibition by first passing in front of Enemy Kitchen (2003), a food truck serving Iraqi dishes cooked by the exiled Iraqi community, included in a series about the this time immaterial legacy represented by cooking, which he would also explore with the restaurant Spoils (2011). Here, his guests were invited to sample dishes prepared by veterans of the Iraq war, under the orders of Iraqi refugees. 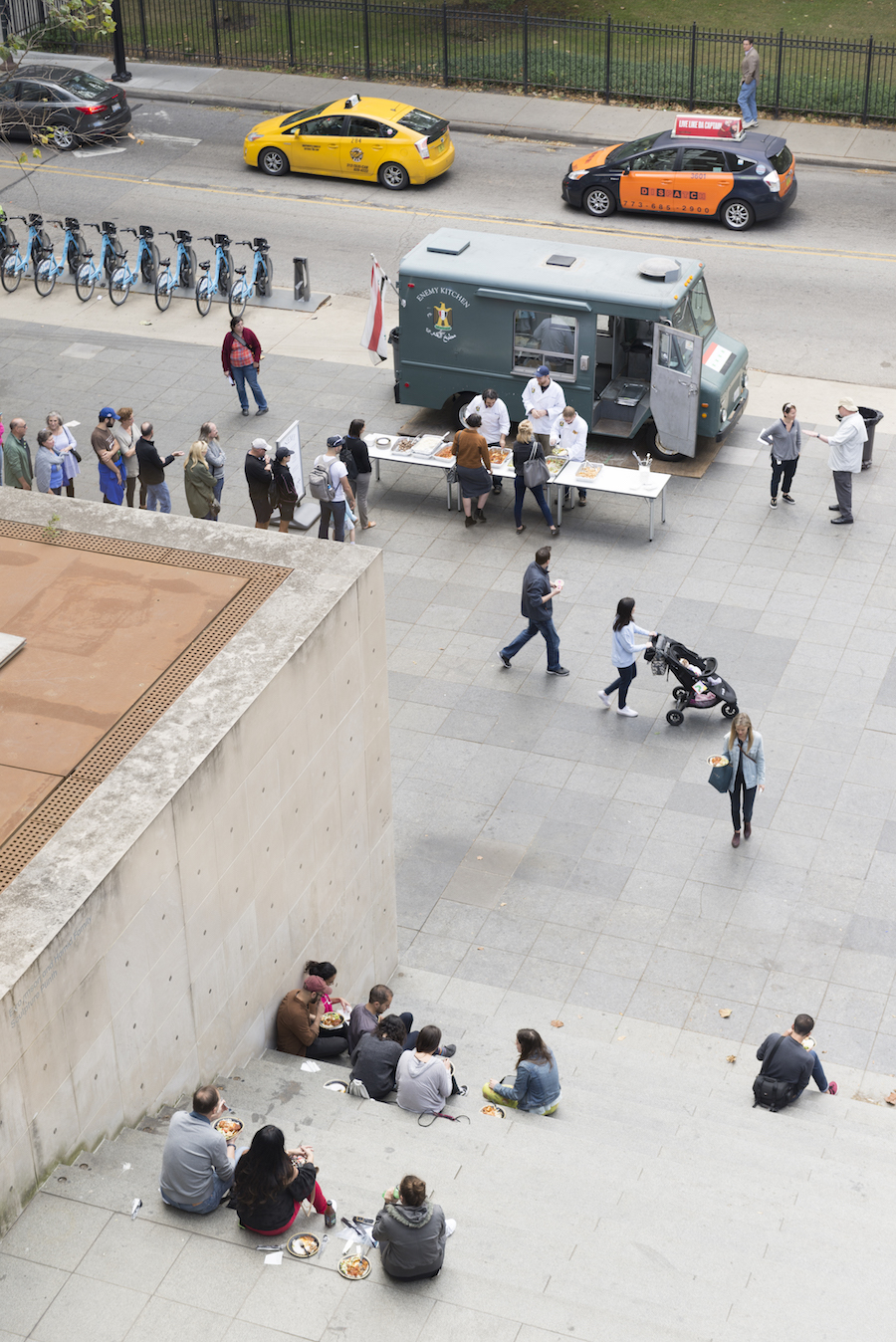 Precisely where a first reading leads essentially to an identification of a tension which is, in the end of the day, quite binary—West and East, veterans and refugees—, the exhibition here renders the palette more complex. It is in fact noteworthy how his works bear the trace of the heritage of social practice typified by the Chicago scene. For Omar Kholeif, “his work is certainly inflected with an element of social practice but this emerged before he arrived to the city, but has certainly continued to contribute to the city’s context. He is very much fundamental to the Chicago scene, namely because he is a teacher at Northwestern University. I have met with numerous students, that he encourages to realize that Chicago is part of a much larger global art world puzzle”. The forms developed come fairly and squarely from the same hands-on activism as with someone like Theaster Gates, a leading local figure whose Rebuild Foundation, located on Chicago’s South Side, is striving to restore access to culture and knowledge for a local community overlooked by the local powers that be. This is a lode which we also find among the younger Chicago collectives like the Floating Museum which, for the past two years, has been developing a moveable museum project on a barge which ventures into outlying (read: abandoned) neighbourhoods. It is also the spirit of the Protest Banner Library, a sewing workshop launched by the artist Aram Han Sifuentes, making banners which will subsequently be brandished in the street. Access to knowledge and skills, as well as “making/doing things together”, is to be found in Michael Radowitz’s work, with the slight difference that the idea of the community to which these forms of modus operandi are related is, for his part, conspicuously different. 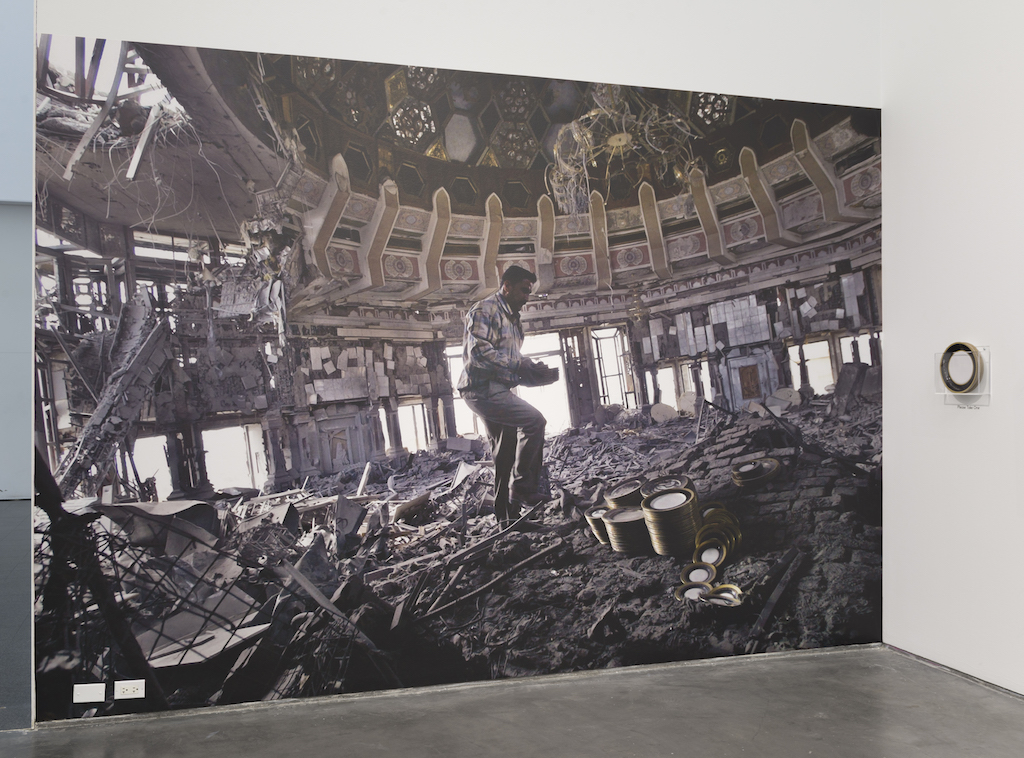 Rather than social practice, the key word here is scale: rather than aiming at a form, these practices are aimed at a recipient. They are ‘community-based’. So what is this community? By force of circumstance, making up for the shortcomings of the powers that be is tantamount, in Chicago, to addressing a community which is black and poor. When Michael Rakowitz in his turn takes up this method of action, he is not just addressing another community which is his own. To be sure, his works are rooted in the history of the Iraqi diaspora and its equally as uprooted patrimony, but this condition of mobility is immediately incorporated. Echoing Homi K. Bhabha, again, his works are thus situated more under the sign of cultural difference than of cultural diversity. “Translation is also an imitation, but in a mischievous sense, a source of disturbance”, in the words, once again, of Homi K. Bhabha, himself of Indian origin, educated in England at Oxford University, who was influenced by the continental philosophy of the 1970s as seen through the American lens (French Theory, ergo), and is now a professor at Harvard. In an interview with Jonathan Rutherford published by the review Multitudes in 2006, he explains: “The ‘original’ is always liable to translation, in such a way that it can never be assigned a prior moment of totality of being or meaning—otherwise put, an essence. This is tantamount to saying that cultures are only formed in this otherness within their own activity of producing symbols, which turns them into off-centered structures—and it is through this displacement, this liminal threshold that it is possible to express different, and even incommensurable, cultural practices and priorities”. So we must understand translation with the new conception of the individual that is forming at the same time; an individual who is once and for all freed from the multiculturalism of the 1980s and from the community ties which sowed the seeds of the post-colonialism of the 1990s.