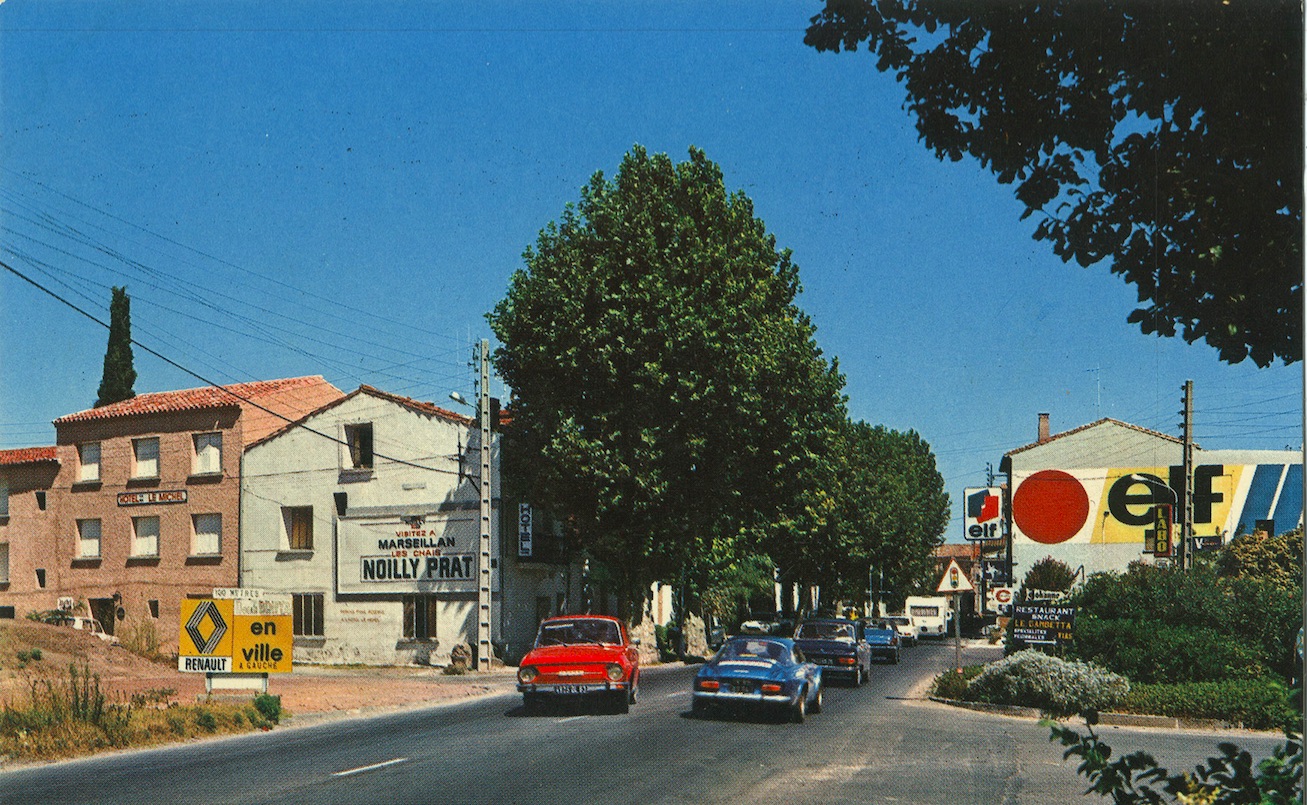 The Olt project is the outcome of an encounter between an almost monomaniacal monochrome praxis and an inordinate love of bikes. In the tradition of this penchant for everything that has to do with the highway, the stations which stake out the great mechanized rides through the American West have a special place in Olivier Mosset’s pantheon, somewhere between oasis and refuge, the modest character of a minimal architecture and the exuberance of incredible signs, they are part and parcel of a mythology which we find more readily in dark auditoria than on museum walls, from Bagdad café to The Postman Always Rings Twice, a sort of obligatory passage of the road movie. Likewise, the abandoned stations in France’s heartlands have long aroused the interest of the resident of Tucson who had already tried to make a connection between his two favourite Wests, the American and the European, by looking for a service station to restore on France’s national highway 6, between Avallon and Chagny, which, in the end, he got the Nouveau Commanditaires1 to buy in order to spruce it up: a mischievous nod to the oh-so-famous Route 66 linking Chicago to Santa Monica, and passing through his adopted Arizona. It is fairly logical that the nothing if not erratic quest of the monochromist should cross paths with that of the Marseille-based Jean-Baptiste Sauvage who, for his part, and unlike the Swiss artist, has for years been involved in a task of exhaustive archival photographic storage dealing with these vestiges of a dynamism to do with France’s minor B-roads, which have now vanished… Above all when the young artist in question also turns out to be an ardent lover of bikes. The meeting between the two protagonists of the Olt project was, in a way, written. 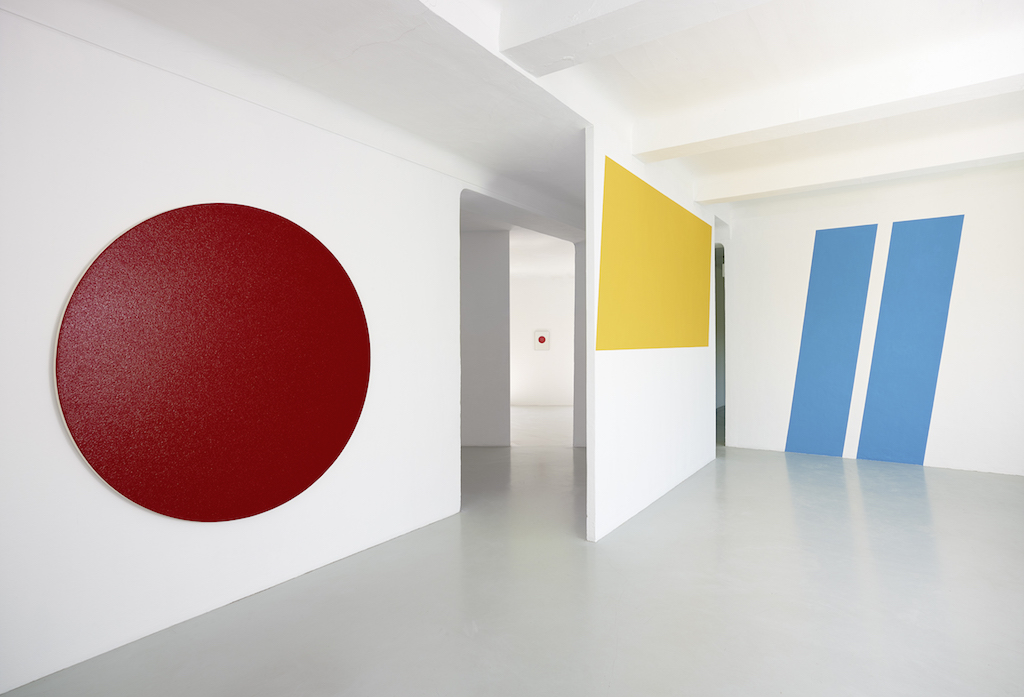 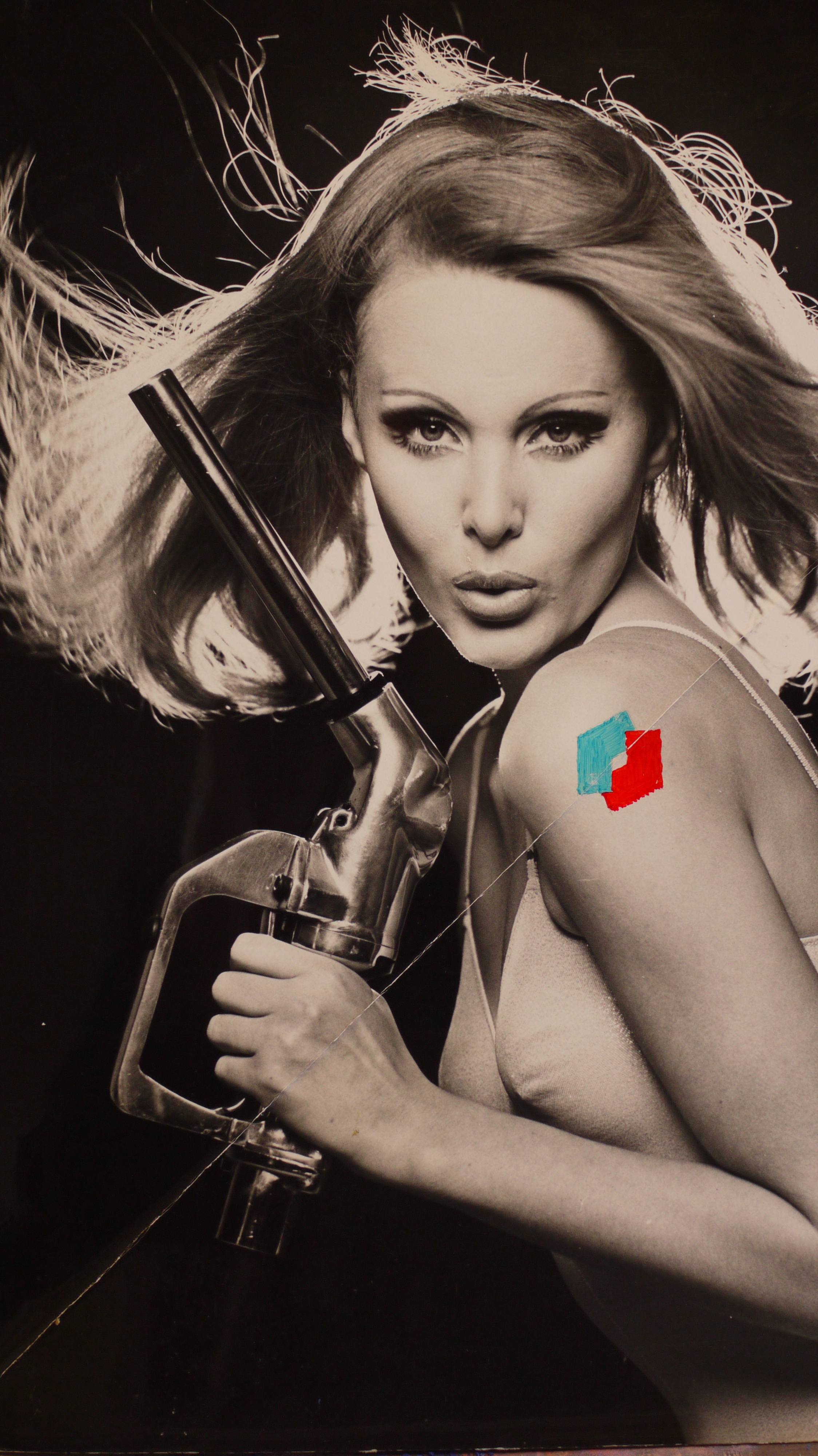 “Collaborations are important because they enable me to do things which I would not have done on my own”2: in the interview he gave about the public commission project for Paris’s number 3 tram line—the project never came to fruition—Mosset thus imparts the basis of a philosophy that has enabled him to increase the number of his collaborative works over time, and perhaps in so doing escape from the minimalist rigour which he has imposed upon himself in the pursuit of his career. For if the work of this Bern-born artist is invariably entrenched behind a radicalism that has ended up by confining him within a deeper development of the pictorial space at the risk of isolating him, the Swiss-American has always managed to engage in fertile dialogues with his contemporaries: be it during the brief BMPT adventure—Buren/ Mosset/ Parmentier/ Toroni—bursting into bitter discussions with the group members which nevertheless led to the publication, in 1967, of a manifesto about minimalist painting, before the ephemeral group exploded under the pressure of internal clashes, or in a more relaxed way with the late lamented Steven Parrino, potential continuator of his formal concerns, then later on with his fellow countryman John Armleder, with whom he made a skateboard ramp for the Lyon Biennale in 1993, and with Servane Mary and Jacob Kassay at the Swiss Institute in New York, where the three of them “stripped ” a Ford Galaxy of its paint and turned it into a pure shiny metal object (Ford Galaxie, February 2013)—again that passion for two and four wheels—or when, in 2005, he organized the famous We Got Cactus Tour3 with the Little Rabbits of Nantes, bringing Tucson’s rich music scene to France—Olivier Mosset seems not to correspond to the conventional image people have of the painter removed from his contemporaries, from whom he fiercely secludes himself in his ivory tower.4

The Olt project is part of this lengthy logic of apprenticeship which perhaps obeys something the artist has not thought about, regularly prompting him to get out of his preserve and use fields other than the picture, as he does in particular in the framework of the many public commissions which he has been involved in throughout his career (see, especially, the spectacular project on the Rive de Gier viaduct5), for this “art of reduction”—an expression which might easily be applied to his work on canvas—does not necessarily give rise to boisterous gatherings and, on the face of it, presupposes rather a meditative withdrawal. The Olt project is the culmination of a conceptual and empathetic path, but also the consequence of an off-the-cuff-encounter with Jean-Baptiste Sauvage, who shares with Mosset an unconditional love for bikes and the fantasy dimension that goes with them: for Sauvage, it is indeed more than an attitude, because he lives and thinks bikes, and spends a lot of time on race tracks, and he could easily be part of that gang of irrational “bike” lovers referred to by Paul Ardenne;6 where Mosset is concerned, with regard to this love of the highway, and two wheels in particular, it is nothing less than a way of life that has been part of his desire to settle in faraway Tucson, in southern Arizona, known not only for its cactus park, its tequila and its B52 cemetery, but also for its music scene and the presence of lots of bikers: in this respect, Mosset is closely associated with the Hells Angels movement, where he is not content to be just an amused observer, but turns out to be a respected member. The bike, an absolute symbol of modernity, rhymes with the whiff of rebellion and anarchism, and also refers to a highly politicized youth whose slag the Swiss painter fully assumes. When certain people, such as an artist like Raymond Pettibon, lay claim to California’s surf and beaches as a psychological hinterland, others, like Mosset, lay claim to bikes and the desert: Easy Rider rather than the Beach Boys, more the silence of flat tints than the chattering of pencils. To what extent does the environment condition an artist’s output, and to what extent does this latter not end up finding geographies which tally with the forms he is looking for? In 1966, after many conceptual wanderings leading him to ceaselessly question the ultimate meaning of painting and rid it of all sentimentality in order to take it towards a greater neutrality, the painter started to multiply what would become one of his most recognizable items, the famous black circle in the middle of a white canvas. After appropriating Buren’s stripes to assert the unalienable character of the sign—which the latter would only mildly appreciate—Mosset pursued his quest in the direction of the disappearance of the “painter”, because the repetition of the motif not only deeply disturbed the notion of novelty and originality, but also demythologized this latter to turn it into a sort of applied automaton. The anticipated effect, the disappearance of all psychology in favour of a neutralization of affects, and a degree zero of painting, all became immediately recognizable and made their author all the more identifiable because he renewed his famous black circle more than two hundred times: the “we are not painters” mantra chanted by the four protagonists of the BMPT group in their 1967 manifesto turned into the ironical assertion of its opposite. 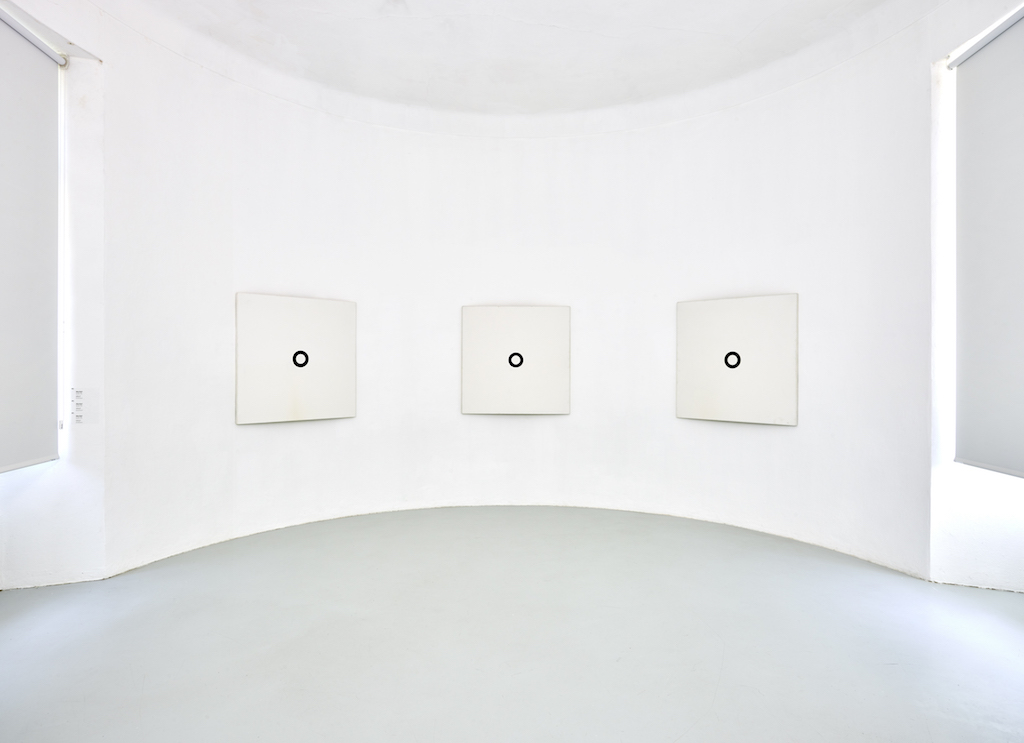 It was in that same period, in 1967, that the campaign orchestrated by the petrol company Elf to propel its brand to the very forefront of industrial modernity got under way. In one night, more than 4,000 red circles were painted on the façades of service stations as part of a decidedly innovative campaign which upset all the conventions of the genre. Needless to say, that multiplication of red circles growing like mushrooms—of which only rare vestiges remain—could not fail to have an effect on an artist who, on a lesser scale, had realized what the might of industry had managed to perpetrate on a massive scale. The prowess that the oil company achieved presented features worthy of a very contemporary performance: shrewdly calculated timing, scenography on a national territorial scale, psychological preparation of the personnel, the creation of a station operator’s “outfit” (up until then this latter dressed more or less any old how): everything was conceived to make that launch nothing less than a dance whose performers were none other than metamorphosed pump attendants, with the décor worthy of that of an avant-garde opera. Between that promotional gesticulation and the reduction of painting to its primary specific features, two logic systems overlapped and separated, that of the painter pursuing his quest for an ever more searching abstraction, and that of industry operating in the opposite direction, that of the logo and the consumerist reflex that it is meant to trigger… 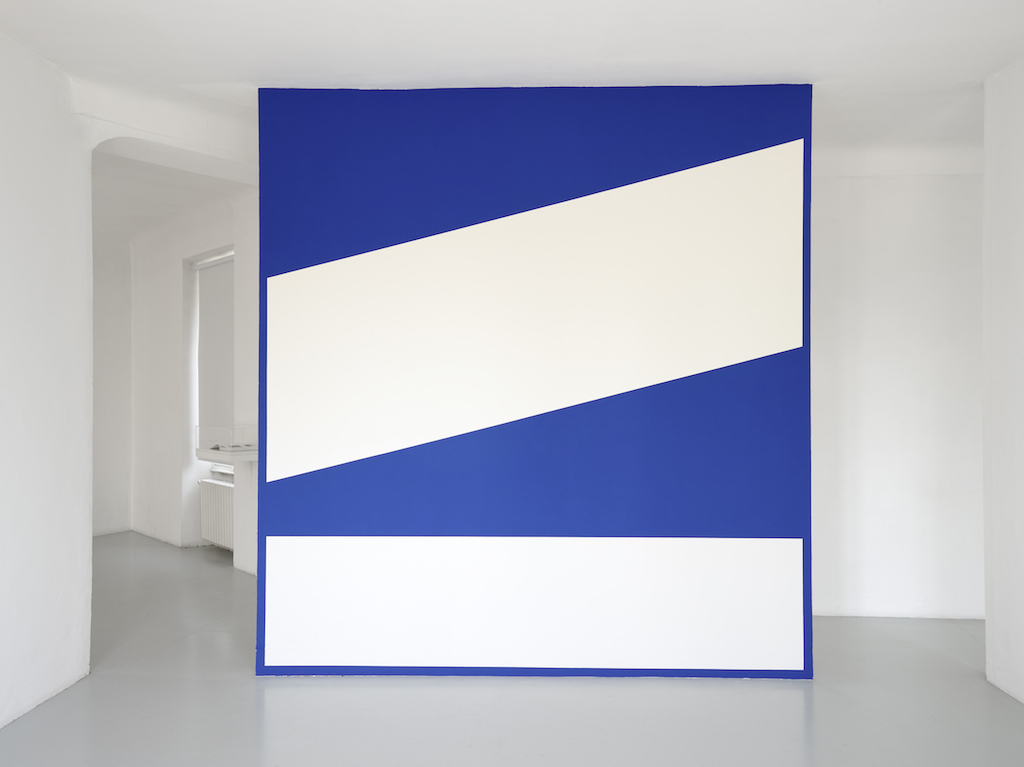 At the EAC, it is as much the encounter between two art praxes as the exhumation of a somewhat overlooked operation that is being enacted. The compulsive archaeological-photographic work involving a recent past, as undertaken by Jean-Baptiste Sauvage by listing these abandoned stations, witness to now superseded marketing policies, joins up with and contradicts the slightly nonchalant strolling—flânerie—of an artist like Mosset, which results more from the mishaps and the famous “objective hazards” of the Surrealists than from any real accountability of vestiges. The meeting of the two praxes really takes place when the two principles merge by creating a kind of explosion of pictorial signs which lend structure to the space of the EAC’s central room. Jean-Baptiste Sauvage’s work on the sign appears between the lines, and we can thus guess at the potential of a work that has managed to develop beforehand, during larger projects, especially in the Razzle Dazzle project where the artist proceeded to make a re-incorporation of the camouflage signs used during the First World War on warships in the post-industrial landscape of Port Saint Louis,7 or again with the Blue Line project to introduce what appears to be a filmic and performative whole.8 Once again, the bike, associated with both shot and speed, plays a quintessential part in this trinity which forms Sauvage’s work: logical in that spirit that we find in pole position in the exhibition, to signify the importance of the “formidable” machine in the mythology shared by the two artists; as it happens, what is involved is the same bike built by Jean-Baptiste Sauvage for the shots on the Paul Ricard track and already exhibited by Olivier Mosset at the Museum of Contemporary Art in Lyon.9 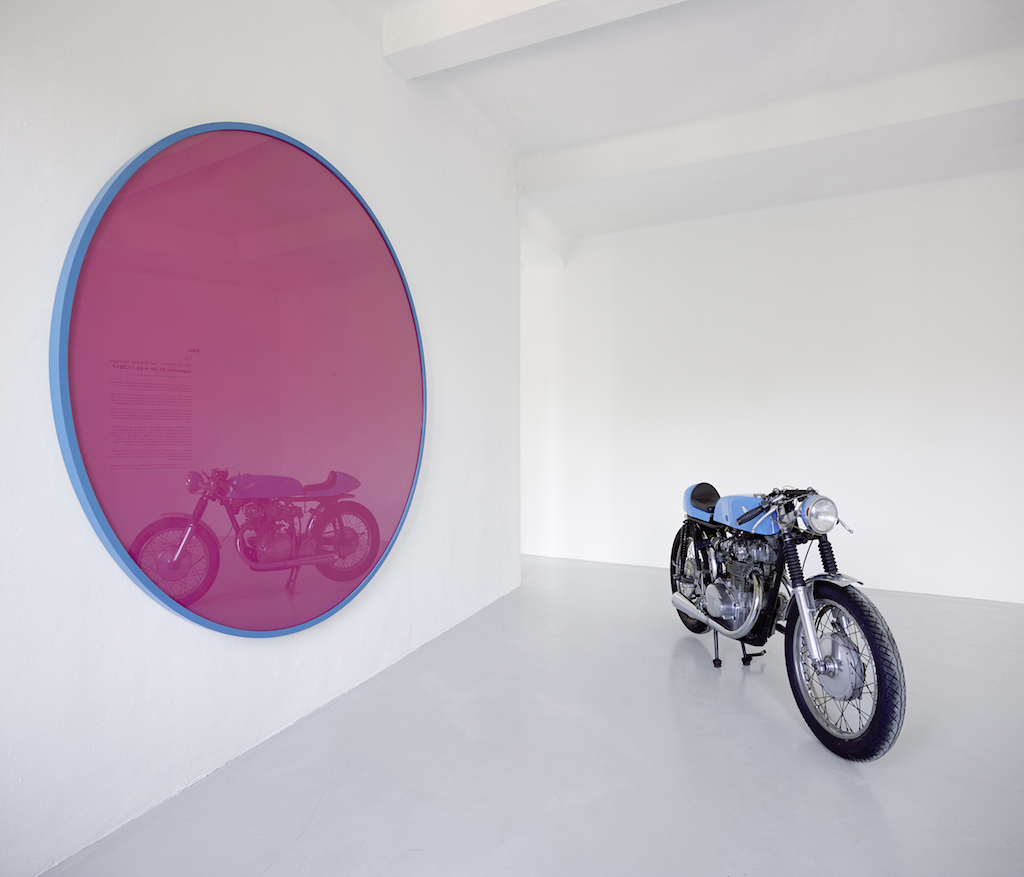 As for the rest, the exhibition gives pride of place to Mosset’s works, presenting them in a scaled down retrospective or rather a ‘best of’ array of his best known items, with the “room of black circles”, an impressive set of tondi of every colour, as well as one of Mosset’s earliest canvases, when he was still painting letters, before putting a stop to all vague chatterbox impulses…

4 A colour which nevertheless suits him especially well, given the number of monochromes of that hue he has produced.

(Image on top: Postcard from the collection of Jean-Baptiste Sauvage, entrances to villages, 1977.)