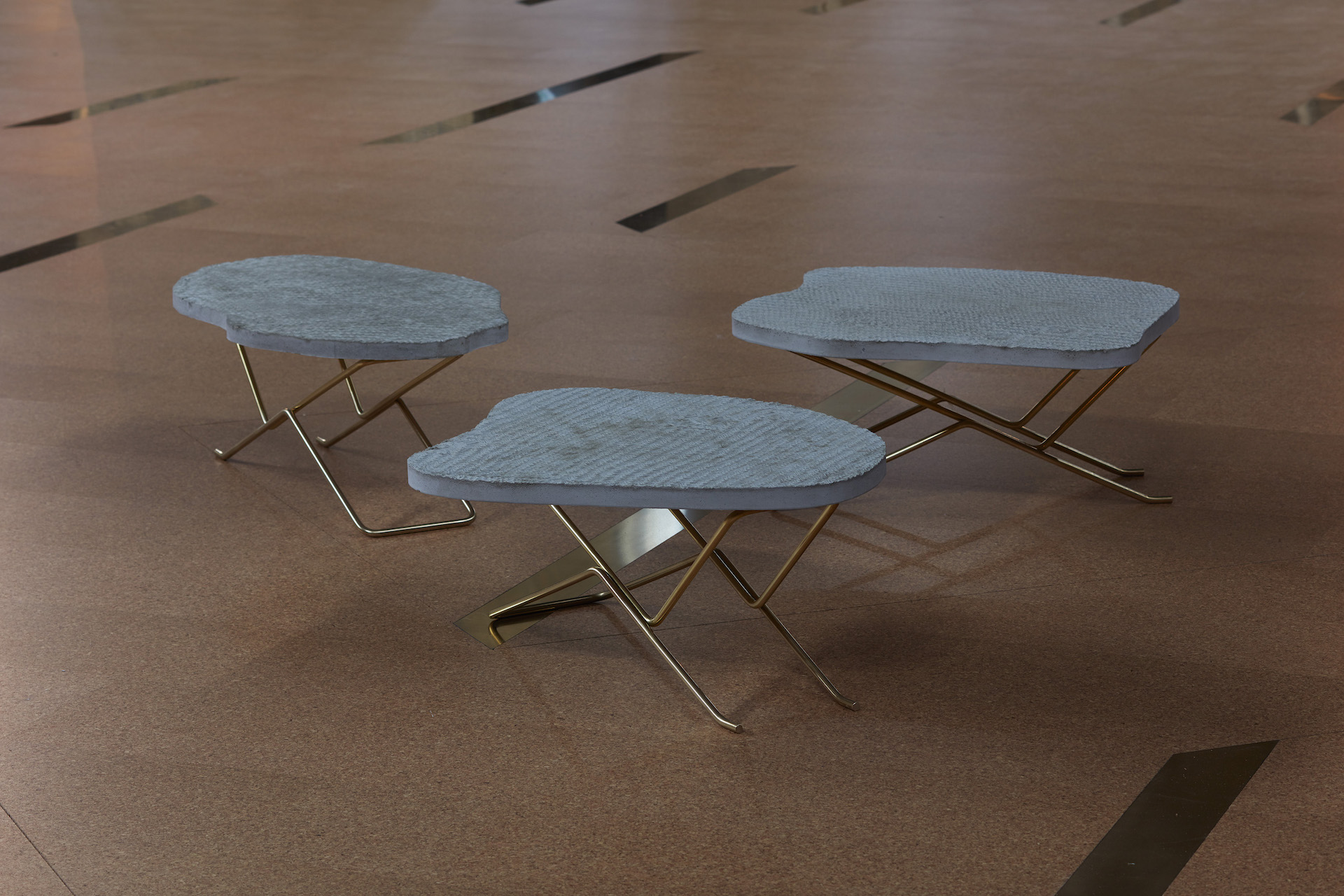 When you read the various essays and articles about Leonor Antunes’s work published over the past few years, the terms dimension, scale and proportion, used to describe her praxis, recur quite frequently. It would be simplistic, needless to say, to limit her research to these few words, but it has to be said that most of her works do clearly refer to them. As the artist incidentally points out herself, she has a very special interest in the notions of enlargement, weight, gravity and change, all issues and subjects which link up with lines of thinking embarked upon in the early 20th century by the advocates of modernism, especially in architecture. So is Leonor Autunes not just another of those artists fascinated by the forms—often more than by the concepts—bequeathed by that emblematic movement? If it is obvious that she has a very special interest in that tendency—for example using for her own ends the thoughts of Le Corbusier on the relations between the proportion of the human body and its surrounding space—, she has managed to go beyond mere appropriation, and stand apart from many of her contemporaries, coming up with an offbeat version, imbued with poetry and sensibility, well removed from the original rigour and quest for autonomy. More than all the other above-mentioned terms, it is incidentally the word “discrepancy” which recurs most often, and best illustrates her rich and complex approach—the artist regularly uses it in the actual titles of her works (discrepancy with…). 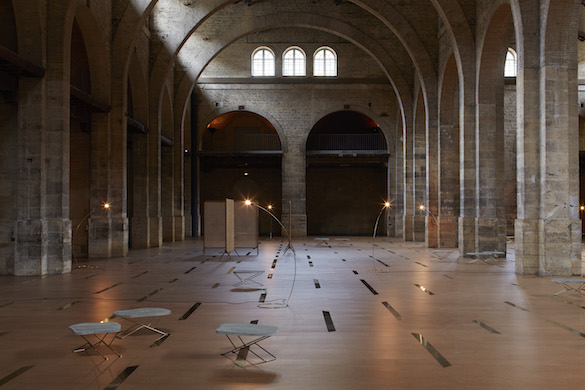 In this regard we should introduce the idea of an “incarnated” or “inhabited” modernism, to such a degree has she managed to connect this cultural legacy with vernacular, artisanal techniques, which are revealed in the materials she regularly calls upon: brass, cork, leather, rope… So Leonor Antunes is a more direct heir of the artists in the Brazilian neo-concrete movement, such as Lygia Clark, Lygia Pape and Helio Oiticica, and who also tried to inject emotion and adopt a less rationalist approach in their respective artistic activities, in response to the rigidity of the modernist Gestalt. 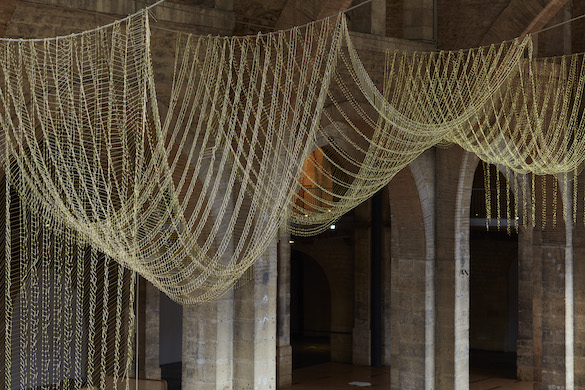 This altogether unusual approach came through in particular in two projects undertaken a few years back, in France and Belgium respectively. At her show at the CREDAC in Ivry-sur-Seine in 2008, titled “original is full of doubts”, Leonor Antunes was thus interested in a villa built on the French Riviera by Eileen Gray—with the help of Jean Badovici—, the Villa E-1027 at Roquebrune Cap-Martin, though, in the end, she only retained a few “fragments” of that architecture—as it happens, the moveable elements like partitions, hangings and screens… By shifting and re-contextualizing Gray’s work, in particular by the re-use of a motif on a curtain which altered people’s movements, Leonor Antunes managed to get beyond the reflexes resulting from the modernist legacy, and do without the formal autonomy recommended at that time, offering a thoroughly refined overall installation, conceived in close relation with people visiting the exhibition, which subtly modified their understanding of the spaces of the art centre, and invited visitors to take a new and different look at Eileen Gray’s work. 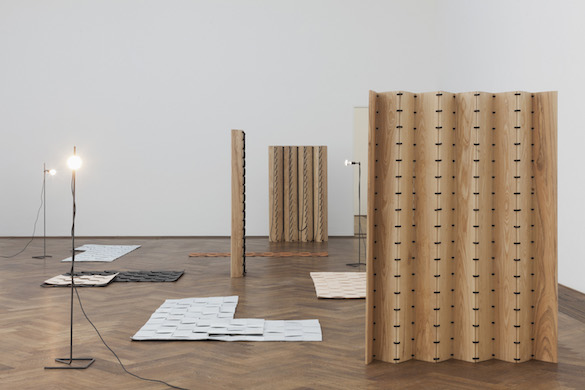 A few months later, she had produced a project for the Beaufort Triennale titled discrepancies with Villa Teirlinck, using the same modus operandi. This time, she focused her interest on one of the last examples of modernist architecture still standing in Saint-Idesbald, on the Belgian coast. During a scouting trip, the artist had noticed both the Villa Teirlinck, built in 1928 by Victor Bourgeois, and the huts installed on Belgian beaches in the summer. With that evident desire for cross-fertilization and by way of a subtle interplay of scales and proportions, Leonor Autunes had, in a way, taken modernist architecture onto the beach, by constructing on it fifteen huts which were inspired straight from the famous villa. Or how to bring back to life an architecture that has been forgotten by most people, by means of a mere shift or change of context. 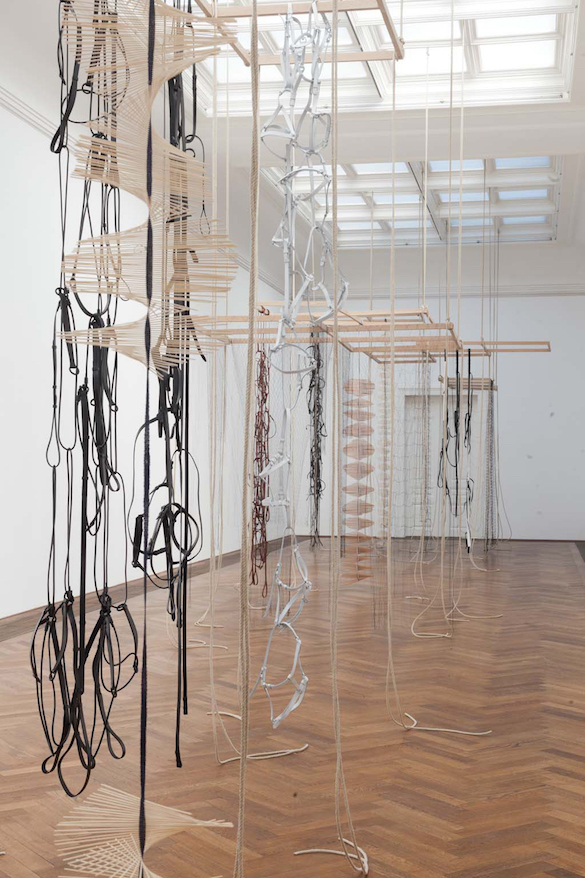 By working exclusively “on the spot”, in response to a specific context and architecture, Leonor Autunes might be associated with that movement sometimes described as “contemporary archaeology”, usually connected with documentary and archival practices. If the issues of concern to her correspond with those of artists affiliated with that trend, in that desire to make a re-reading of a recent History, and reveal events that have taken place in silence or been forgotten about, she nevertheless adds a thoroughly personal way of thinking about materials, and an attempt to once again bring out certain artisanal techniques which have today fallen into disuse. So it was with her show at the Basel Kunsthalle in 2013, “the last days in chimalistac”, so-named after a neighbourhood to the south of downtown Mexico City, where the Cuban designer Clara Porset lived at the end of her life. A student of Josef Albers at Black Mountain Collage, and recognized for her inclination to incorporate folk art, vernacular forms and natural materials in the modernist vocabulary and precepts—the way Leonor Autunes is doing today—, Clara Porset incarnated all on her own a whole swathe of the history of the arts in the 20th century. But precisely where others would be directly interested in the most unusual destiny of this woman, in a logic of transmission, not to say rehabilitation, the Portuguese artist has remained faithful to her principles. She has developed here what we might describe as an “abstraction of reality”, by presenting snippets of this history through the re-reading and manipulation of forms which become so many ‘thinking objects’, sculptures which call to mind those created by Clara Porset, Anni Albers and Lina Bo Bardi, in their day. As she incidentally recently pointed out, this relation to volume, and to the material nature of artworks, is quintessential in her thinking and her approach: “My work is very classical in a way. I often think of sculpture, in particular of classical sculpture, and matter, as well as the fact of removing and adding matter.”1

“le plan flexible”, her recent show at the CAPC, contemporary art museum in Bordeaux, comes across as being emblematic of this special relation she has with both sculpture and architecture. While such a work process might, in due course, lose its impact and flirt with the decorative, Leonor Antunes manages each and every time to avoid needless repetition, and the somewhat futile stylistic exercise. By steeping herself in the memory of places, she has here measured herself against that mythical space, the CAPC’s nave, seeking to “metamorphose the museum’s space from one imposing scale to another, on a more human dimension, in which visitors can be incarnated, thanks to their proximity to the works.” So, to do this, she covered the floor with a cork parquet, studded with pieces of iridescent metal which punctuated the stroll around it, on which she then arranged various elements such as screens, tables and lights. Made with fetish materials, these objects echo archetypal forms of postwar designs, encompassing rounded shapes, geometric harmonies and lightness—all relative, nevertheless, with the tables made of concrete—and make the museum space more domestic and more hospitable, well removed from the apparent rigidity of that famous stone architecture. Leonor Antunes incidentally refers directly to this notion of domesticity by way of a text by Anni Albers, The Pliable Plane,2 after which the exhibition is titled. In this text, this latter explains how to “clothe a place”, before establishing a parallel between architecture and sewing, in particular in that idea of assemblage of different elements in order to form one and the same whole, a unique work to be appreciated in its totality—the way you sew pieces of fabric to form just one final piece of clothing. 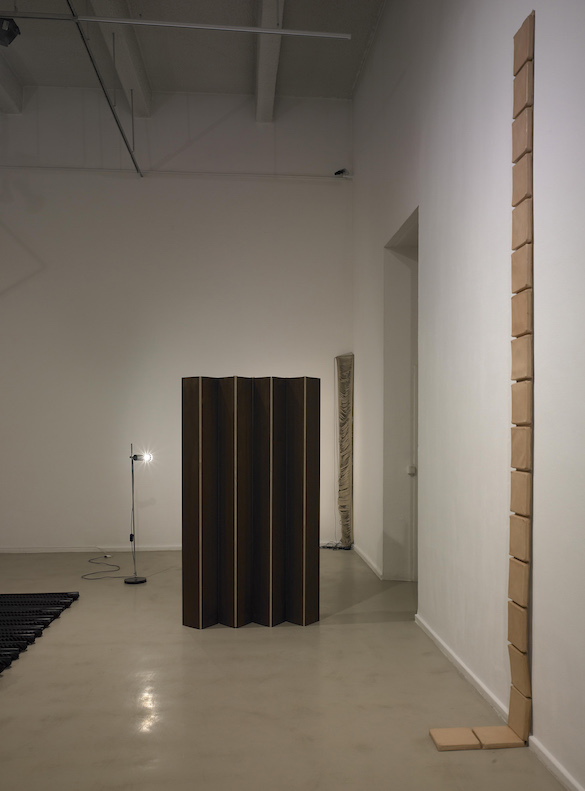 The different elements brought together in the nave magnify the space and alter our grasp of it by making it more private and less solemn. Just a curtain made of brass mesh, hanging some thirty feet from the floor, reinstates the building’s verticality. At no time has Leonor Autunes sought to confront the architecture of these old food storage depots; rather, she has tried to fit herself within them, and transform what exists in order to better reveal it, and come up with new relations between the works and the building, the way Daniel Buren managed to do in his day with his installation of mirrors (Arguments topiques, 1991). Far from a mere principle involving quotation which would call for specific knowledge, Leonor Autunes preferred here to use the elements of a potential narrative, with just a few snippets being offered, making everyone then free to invent their own narrative. The whole aptness of the exhibition resides in the precise placement of each element, in the interplays of light and reflections which are revealed during the day. And the idea of being further enriched when you reach the CAPC’s mezzanines. Here, in fact, you discover a new viewpoint, surveying the installation, and underscoring the precision of this composition, like an echo of the grid dear to the theoreticians of modernism. What, in the end of the day, predominates is the simple pleasure of walking round this assemblage of forms and techniques, rediscovering, on a quite different scale, the work of an artist who has managed to occupy this most special venue, and sublimate it by way of an installation which is at once complex in its development and its relation to the surrounding space, and limpid in its reception by the public. The whole discrepancy of Leonor Autunes’s approach is to be found summed up in this masterful work, which illustrates the history of the site by taking us towards somewhere else which is far more poetic.

1 The different quotes are taken from an interview with the artist at the CAPC in January 2015, during the preparation of her exhibition. 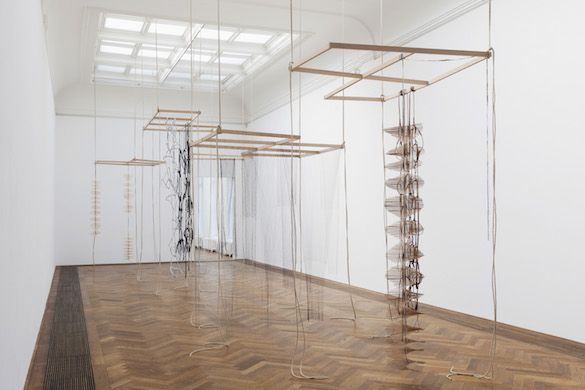