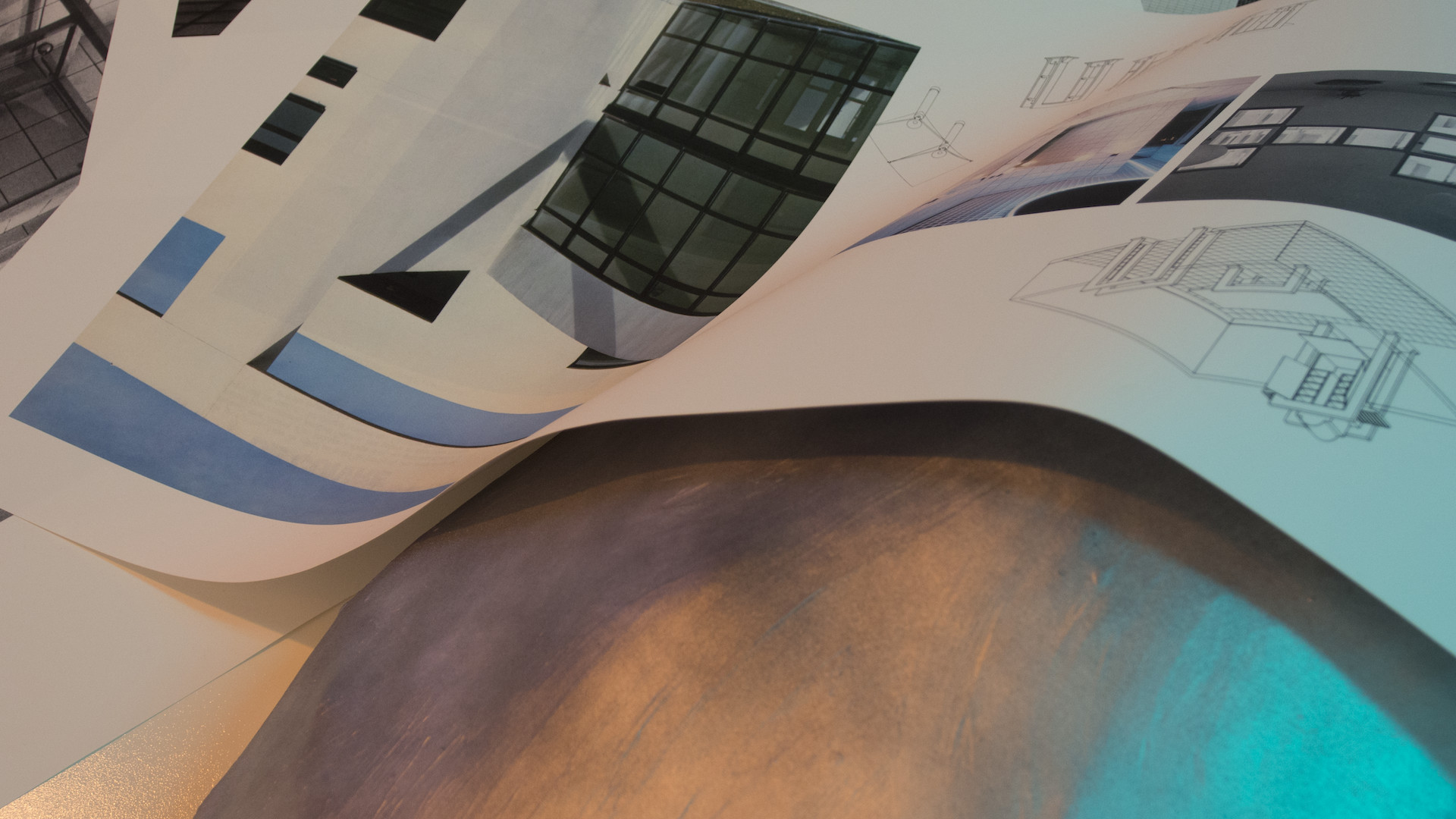 My Dreams Dictate My Reality

What instantly calls out to you when you discover Laëtitia Badaut Haussmann’s work is the degree to which she masters the history and vocabularies of film, literature, architecture and design, all of which she regularly intermingles in her praxis. A good example of this is the small boy endlessly throwing a ball against a wall in Tiebreaker (2010), where a line of thinking shows through which has to do with the exhaustion of images, while at the same time illustrating words uttered by Godard during an interview—“I love tennis, I can watch a 12-year-old kid hitting the ball against a wall for two hours”.1 Another similar example is the parable about apprenticeship and learning of And again and again and again (2012), a video in which a dancer repeats the same movement over and over again until he is giddy, a sensation heightened by the ceaseless circular tracking shot. By thus appropriating these forms and theories for use in her own work, Laëtitia Badaut Haussmann tends to deconstruct “classical” narrative codes. But well removed from any spectacular and grandiloquent, she tries rather to introduce an ambience, an unusual atmosphere, favourable to abandonment and daydreaming. The terms reminiscence, influence, appearance and drift are regularly used to describe her work, and attest to that desire to take the spectator towards somewhere else where fiction insidiously takes precedence over reality. The artist works on narrative forms, things that are offered to the eye and the ear, in an attempt to reveal an unsuspected narrative potential, with the exhibition venue becoming a place which emancipates and sublimates reality. Drift is what is involved in A Program (2013)2 and A Program #2 (2014)3, other significant examples of the overlaps and hybridizations executed by the artist. In the past few years, Laëtitia Badaut Haussmann has in fact undertaken projects which stem from performance, and which she describes as “cinematographic strolls”. These wanderings in peri-urban and peripheral zones—from the Pavillon Carré de Baudouin to the Croix de Chavaux neighbourhood and various parts of Vitry-sur-Seine—are punctuated by interventions by anonymous characters calling New Wave figures to mind, furtive fictional sequences which work their way into the daily round, the better to disturb it and, in a way, “augment” it, while revealing these usually neglected districts which are close to J.G.Ballard’s world, or David Cronenberg’s. 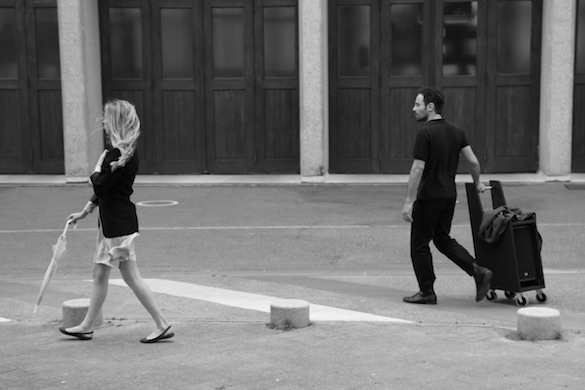 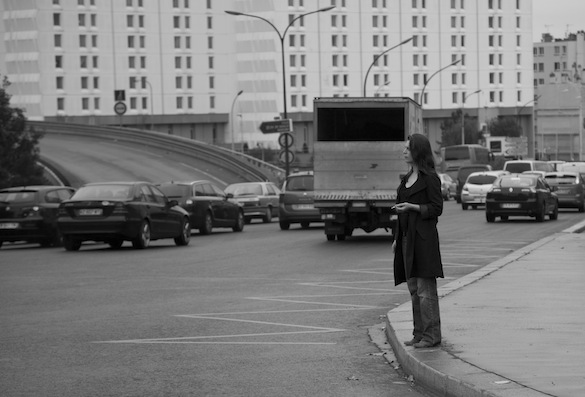 This dovetailing of several narrative plans is also to be found in her almost systematic desire to respond to a specific context and situation, to an encounter or a place discovered during preliminary research. Working like an archaeologist or an anthropologist, Laëtitia Badaut Haussmann exhumes moments of history, as in the installation We wish we could have gone on that journey (2013), shown in “Mélodies en sous-sol”, the first part of the cycle Le tamis et le sable at the Maison Populaire in Montreuil.4 This accumulation of rudimentary seats—produced on the basis of autoprogettazione, a system for making furniture devised by Enzo Mari in 1974—echoes the story of Emile Méreaux, founder, at the end of the 19th century of an anarchist community in Montreuil seeking to develop alternative systems of logic governing economic exchanges based on a furniture-manufacturing cooperative, and instigator, a few years later, of the “Soirées ouvrières” [literally: Working-class Evenings] at the city’s Université Populaire. Similarly, for the exhibition titled “...C’est ainsi que finit le monde. Pas sur un bang, sur un murmure”(2013),5 the artist went rummaging around in the archives of the Emmetrop Association in Bourges, exhuming concert advertisements which she then re-framed and blew up to poster size, proposing to promote alternative rock figures to the rank of icons (These are the days that matter (2011)). Lastly, in what is still one of her emblematic projects, at the exhibition “Dynasty” held in 2011 at the Palais de Tokyo and at the City of Paris Museum of Modern Art, her interest lay in the nothing if not atypical history of those two buildings and some of their earlier functions: respectively, a storage place for pianos confiscated by the Nazis from deported Jewish families, and the Polish embassy (No one returns and No one returns II (2010)). 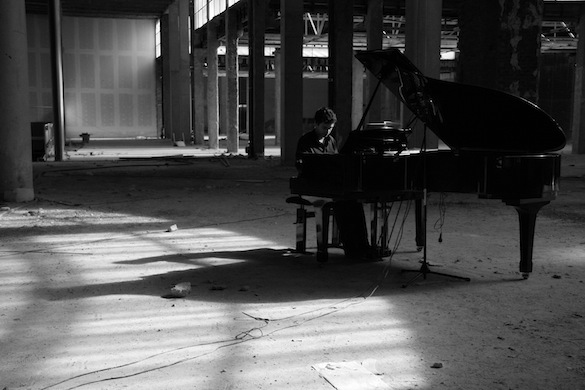 Her recent show at the Passerelle Contemporary Art Centre in Brest, titled “L’Influence de Neptune”6, was constructed on the same principle. At the root of the project lay a mythical Brest landmark, “Le Vauban”, a hotel and concert hall opened in the 1950s, with a certain projection potential. Following the discovery of this establishment during a stay in the western city, Laëtitia Badaut Haussmann came up with a project that thus involves not only this hub of Breton night life, but also those two iconic figures, Jean Genet and Rainer Werner Fassbinder—authors, respectively, of Querelle de Brest and Querelle, its film adaptation—, as well as figures of modernism and functionalism, ranging from Eileen Grey to Joe Colombo. However, far from being a “simple” homage or a praxis resulting from appropriation and quotation, the artist has taken over these different elements the better to transcend them, and write a score and a movement, acting as an exhibition and introducing an altogether unusual ambience, with the Passerelle industrial area being turned for a few months into a modernist interior, plunged in semi-darkness. With “L’Influence de Neptune”, Laëtitia Badaut Haussmann has attained a rare equilibrium, an alchemy between the elements brought together with something irrational about it—a feeling bolstered by the title’s mystical connotation—, giving the impression of crossing one and the same installation, containing at once the start, the exploration and the pursuit of the narrative. The different works talk to each other—the glass screens (Lee filters almost (2015)) seem to appear in the luminous variations of the film after which the exhibition is named, and the seats and lights arranged here and there seem to be straight out of the framed images on the walls (Maison française, une collection (2012-2014))—but none of them holds sway over the others. They are not the mere illustration of an idea, but rather its incarnation, an at times incomplete formation but one that is faithful to the artist’s desires. The sculpture which opens the show (Sans titre (l’amour est plus froid que la mort) (2015)) is furthermore emblematic of these overlaps and other frictions: what is involved is a piece of fabric twisted into a form that is both extremely sober and organic, representing a knot, like a pivotal object, a knot of meaning which might manage to connect all the works brought together while at the same time echoing Genet, with the black and the velvet calling to mind both mourning and desire, two states that are ubiquitous in his text. 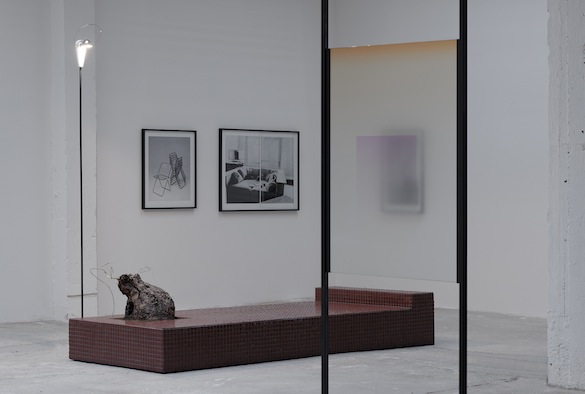 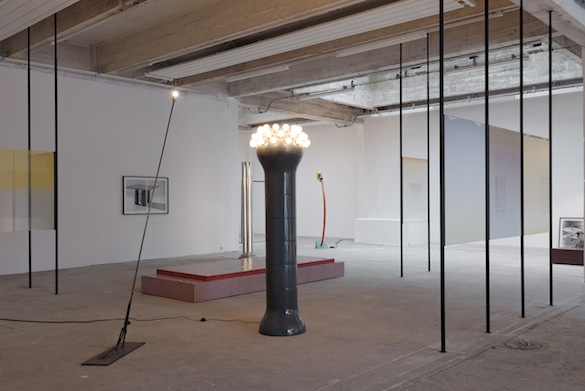 But Laëtitia Badaut Haussmann’s extremely multi-facetted praxis can only really be grasped in its entirety. It has to be seen as one and the same corpus which has been developed over the years, from one project to the next, with each one of them responding to the previous one and enriching it, and permitting a new reading. Her last project to date, “When the Sun and Neptune,”7 presented at Zoo Galerie in Nantes, is a faithful illustration of this. Here the artist summons up another major literary figure in the person of Robert Louis Stevenson, by way of this quotation: “…in the room where the writer works, there should always be a table covered with maps, architect’s plans and travel books, a second table where he writes, and a third which must always stay empty”. This sentence, rich in promise, is intended to be the exhibition’s starting point, at once the statement of its formal resolution, the pretext for a proposition about the links between literature and architecture—the blank page, the white cube—and a way of thinking about that space with many different dimensions, otherwise known as a text. In so doing, Laëtitia Badaut Haussmann prolongs this game of reminders and overlaps, the exhibition in Nantes being conceived as a postface to its counterpart in Brest. Beyond the title’s allusion, we actually find in it that desire to respond to the unusualness of a given place through a specific arrangement, an interest in the passage of time, the accumulation of different narrative layers, and the introduction of a context and a system, rather than the clear resolution of a set of issues. 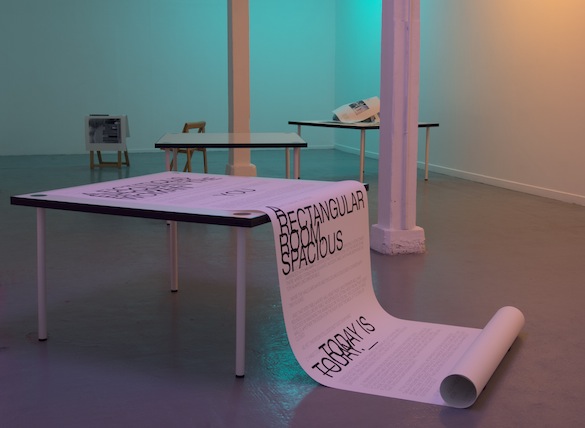