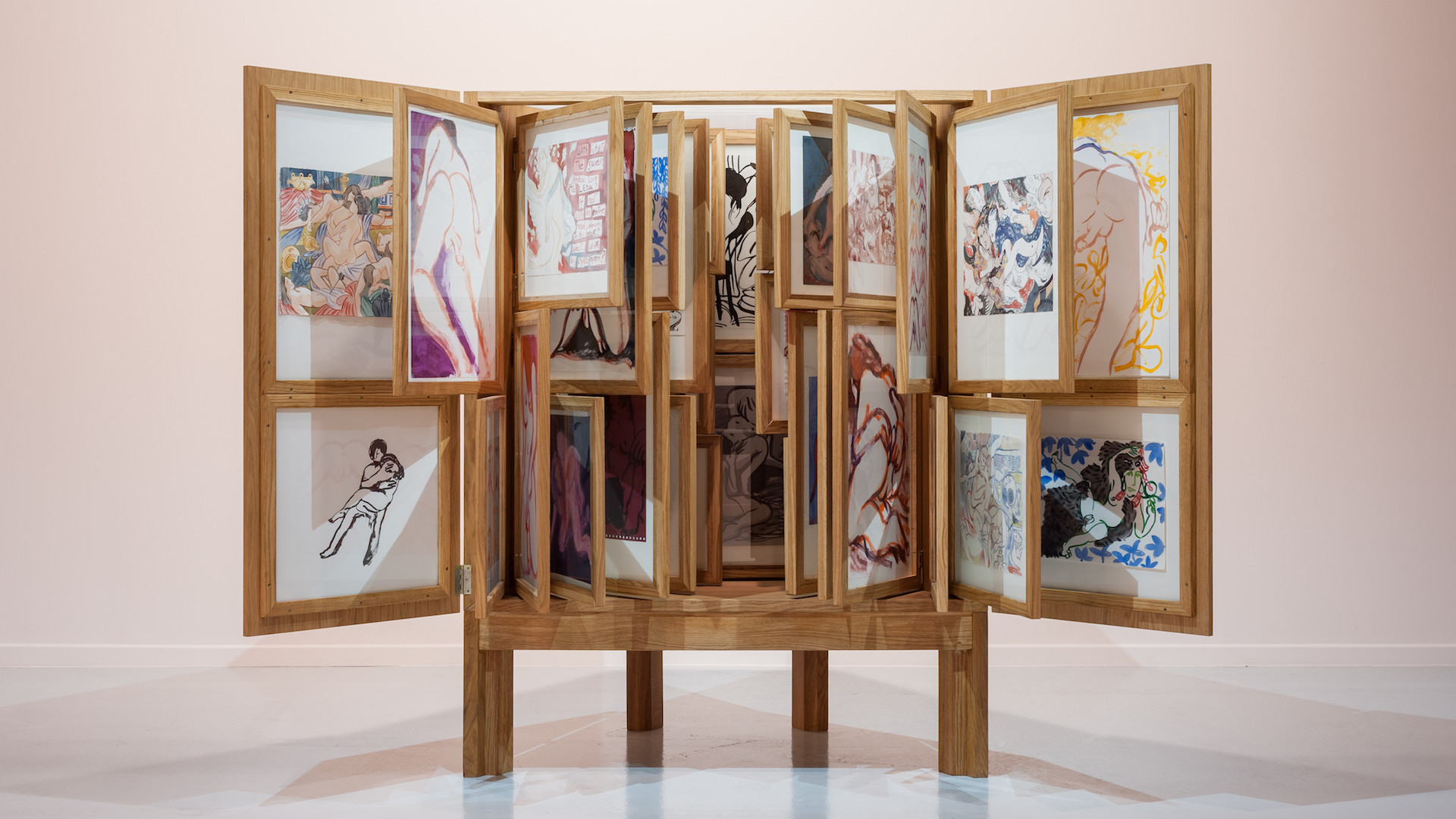 In December 1948, a man was discovered dead on an Australian beach with no clues to help to identify him. The only thing that was found, in the lining of his trousers, was these words from a 12th century poem by Omar Khayyam : “Taman Shud”—“It’s the end”, in Persian. From then on the unknown man’s identity resided entirely in the fragment of a poem. And this is just as much disappearance as a narrative promise. This mysterious news item inspired a novel by Alex Cecchetti and his exhibition “Taman Shud” presented at the CCA Ujazdowski Castle in Warsaw and the Ferme du Buisson in the Paris region. The use of the reference here functions above all like a metaphorical echo of the artist’s own situation. Alex Cecchetti in fact declared himself dead in 2014. All that remains of him, in his own words, is a narrative identity traversed by a host of poems, and narratives read, heard, appropriated and re-transmitted. In a way he forms a single-voiced ghostlike choir, in which are diluted, in the age of exploitation and commodification of personal data, the notions of author and biography—unless it is the expression of a meta-ego. “I no longer know who’s speaking”1, he declares, the important thing being elsewhere, in the necessity of telling. 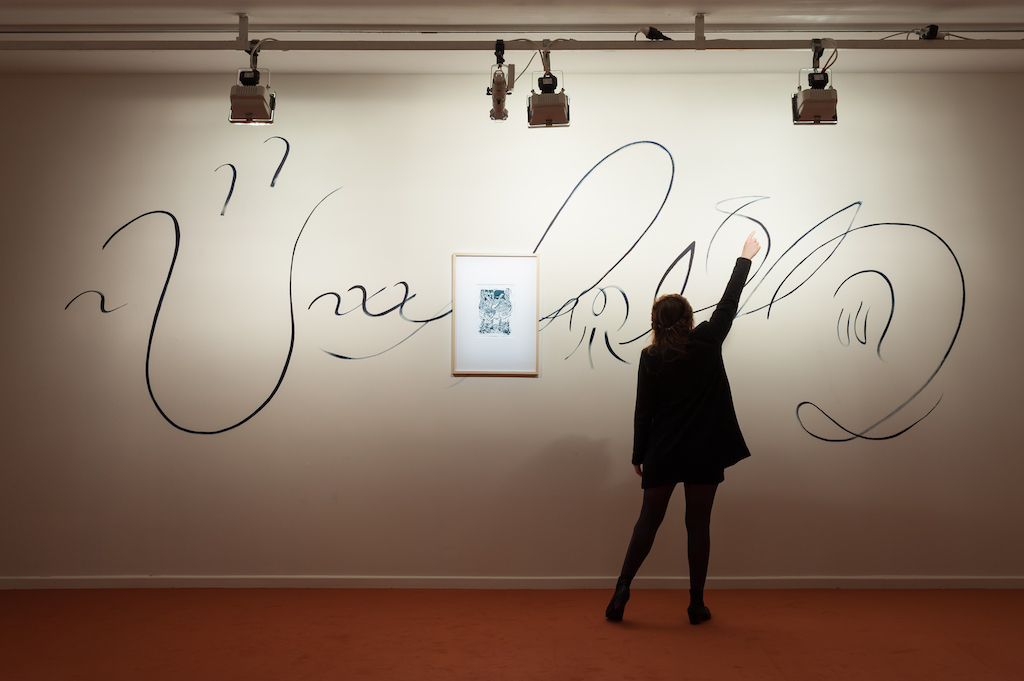 To describe the dynamic that informs his works, Alex Cecchetti talks readily of pollination, the way in which information travels from one flower to another, usually by way of an intermediary (wind, bees, bats). His work is based largely on the exploration of a contact zone, precisely where things affect and are affected. So under the effect of the bodies of dancers and spectators invited to move about on it, pebbles placed on a dance floor formed by copper plaques are gradually contaminated by the metal and gash its surface, some of the scratches being in their turn re-used in a wall drawing designed to be narrated. 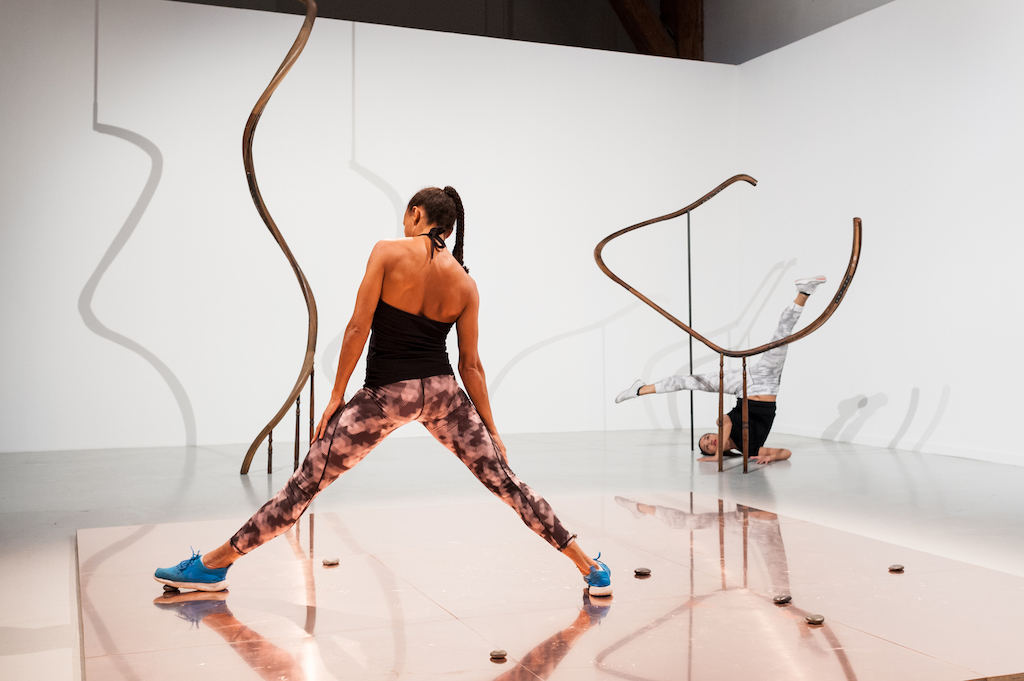 This lability and this permeability of forms also proceed through synaesthetic procedures of interpretation and translation, from paintings resembling botanical illustrations giving rise, for example, to a score for piano or a set of poems, to the menu for a dinner served in the exhibition. The artist’s works are never mere objects of contemplation, rather they produce an effect or reveal a use, a performativeness. While trying to extricate themselves, they forever waver between different kinds of representation (word, image, action) and perceptible vectors (music, poetry, dance and gastronomy) looking for a certain sensuality. The analogy with pollination is not a trivial one, because if it evokes a form of organic circulation, it also introduces a mediated sex act. Obviously enough, things do not go this far in the Alex Cecchetti show, but this does illustrate the carnal dimension of his work which, through the physical and mental address he makes to the spectator, suggests an eroticism of propagation. 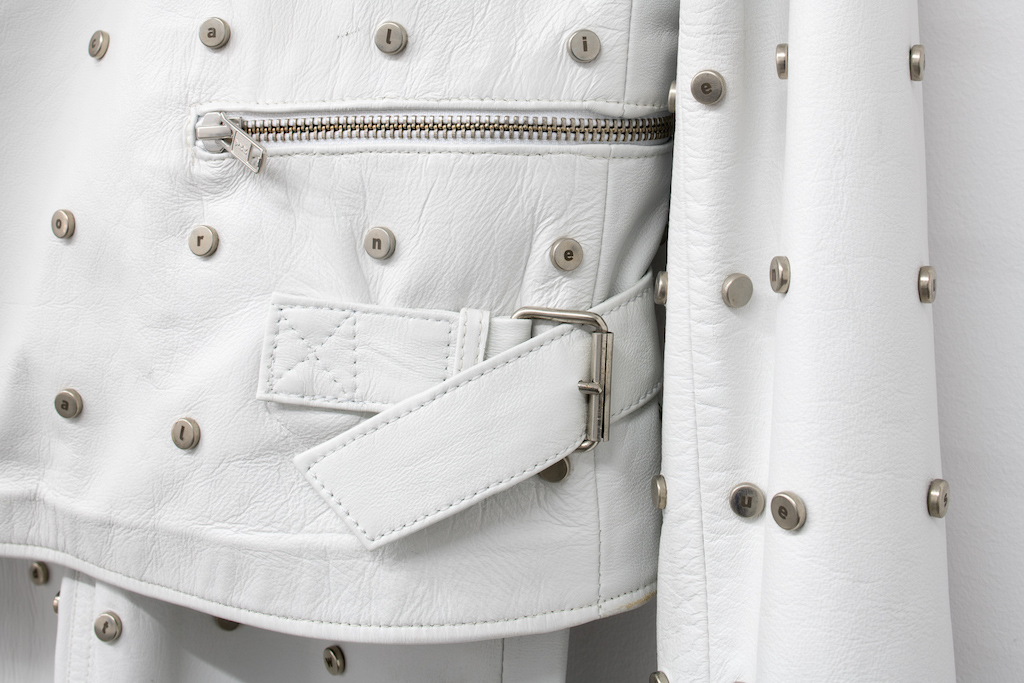 This something that floats in the air, this mingling diffused perfume, this merger of the private and the collective also inform the work of Pierre Paulin, taking part in a re-reading of appropriation strategies, lulled as much by melancholy as by ecstatic pleasure. Poetry and language, in the broad sense, lie at the heart of his praxis insofar as, based on already existing elements, they make it possible to produce endlessly re-enacted compositions. The artist readily quotes the American poet Jack Spicer, for whom writing proceeds from the translation of extraterrestrial voices, as if the author “were listening to a radio endlessly passing from one station to the next, or as if, tuned to a poorly selected station, he were carefully noting all the interferences.”2 What does language do to us? How does a common datum act on the intimate? In his first solo show at Le Plateau/FRAC Ile-de-France, Pierre Paulin explores these questions through a history of the sneaker and its socio-cultural implications, which takes the form of a poetic essay made available to the public instead of the usual visitor document. This “whiff of mediation”, as he calls it, innervates and informs the whole exhibition. 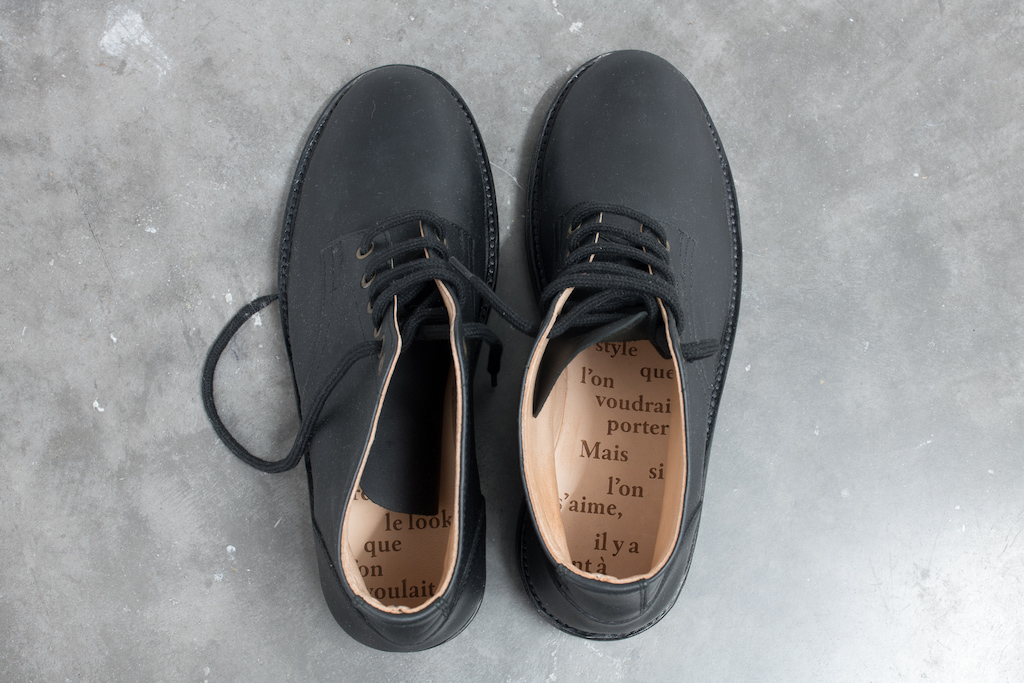 In particular, he returns to the history which links the Adidas brand to the Run DMC hip-hop group, and to a 1985 Nike advertisement in which the basketball player Michael Jordan bounces a ball to the sound of a dull boom which the artist makes ring out once again in certain areas of Le Plateau closed for the occasion, which, like a poetic metre, punctuates the way the visitor-cum-reader strolls about. Because, in Pierre Paulin’s work, everything is text. He does not dissociate language and representation. This dimension passes in particular by way of the making of a series of looks, made to fit him, on which are “published” specific essays shedding light on their tendency. Georg Simmel described fashion as a process stemming at once from imitation and differentiation.3 For Pierre Paulin, clothing protects us as much as it exposes us and represents us, as individuals. Forming the interface which places the body—here physically left aside—in the space of the other in the same way as perfume or make-up, the look stems from an operation of bricolage, from the construction of a particular language and identity, based on the assemblage of mass-produced standards (which the artist calls “basics”). Clothing becomes a medium of representation and diffusion—an address—and the look a fantasy of re-writing, a concrete poetry. But the artist also highlights the fact that this individual writing does not elude our desire for logos (the acronym-sign which creates a style), nurtured at once by marketing re-appropriations and a generational fondness for nostalgia, for a mechanics of reminiscence fuelled by a fetishism of merchandise and an eroticism of memories. 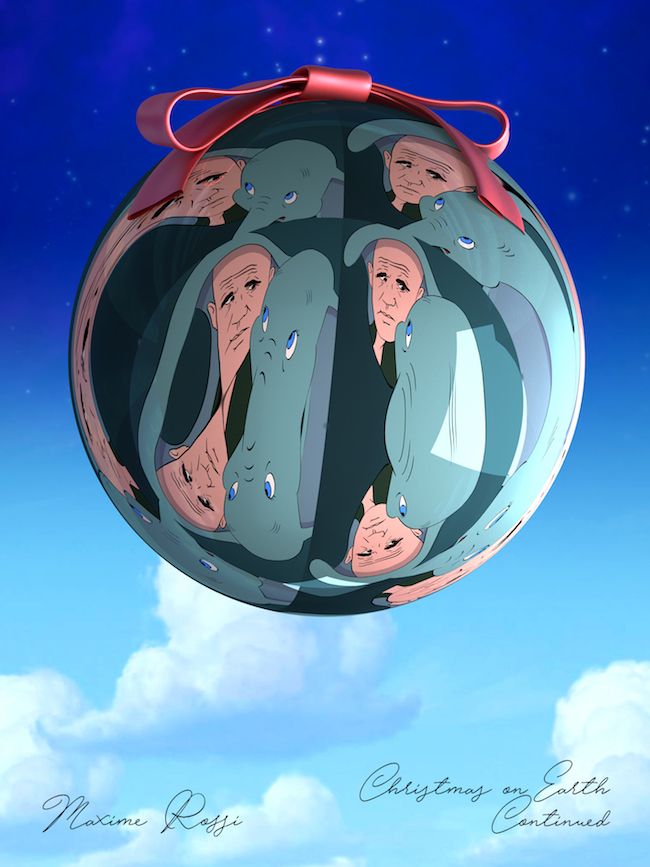 If Pierre Paulin’s project was developed from references to the Pop culture of the 1980s, Maxime Rossi’s show at the MRAC in Sérignan, titled “Christmas on Earth Continued”, plunges us into the medium of the Summer of Love. At the heart of the project: an impossible investigation around a remake by Pink Floyd of the piece Louie Louie, the 1963 version of which by the Kingsmen kept the FBI busy as they strove to decipher the obscenity of the words in the singer’s unintelligible pronunciation. The concert in question was held in 1967 at a festival that remains in people’s memories as an artistic and financial flop (and as a high point of drug consumption), titled Christmas on Earth Continued as a homage to Barbara Rubin’s cult movie (itself inspired by Rimbaud’s A Season in Hell), an orgiastic ceremony projected on several superposed screens, an innovative thing to do at the time. Based on this fabric of interconnected references and associated rare sources and information, Maxime Rossi decided to re-create a live experience using improvisation sessions around the theme of Louie Louie held by the group Dirty Song, which he brought together for the occasion around, in particular, the highly respected David Toop and Phil Minton. Precisely where Cecchetti and Paulin aimed at an identity traversed from all directions (“je est un autre/I is another”, to carry on Rubin’s Rimbaud quotation), Rossi opts for collaboration and collective energy, but also for ritual. The show at Sérignan is presented as an immersive and multimedia experience into which are re-injected a script by Rubin reproduced to the scale of the wall, the Dirty Song recording sessions, the group’s merchandizing (vinyl disk and silkscreened T-shirts), a series of acoustic prisms, and the images filmed during Minton’s vocal takes in the studio, on which are overlaid views of the mud crater of the Solfatara volcano in Italy and short animations in which Dumbo recurrently appears. The whole thing has a chthonic tone and resembles a paradoxically enjoyable bad trip in which the creases in the vocalist’s face are forever changing, through a simple mirror effect, into female sexual organs—a wink at the paranoia in Hoover’s FBI. But it is in the random and continuous diffusion and assemblage of the various elements that the project seems to find an original echo with the idea of pollination developed by Cecchetti. The different sound and video fragments are in fact re-orchestrated in real time by a behavioural algorithm corresponding to moods of displacement and calculating the likelihood of associations in such a way that the exhibition is always in motion and cannot be seen twice in the same way. In this great intermingling where the images are permanently switching partners and configurations, technology generates something organic on the scale of the live representation henceforth constituted by the exhibition. 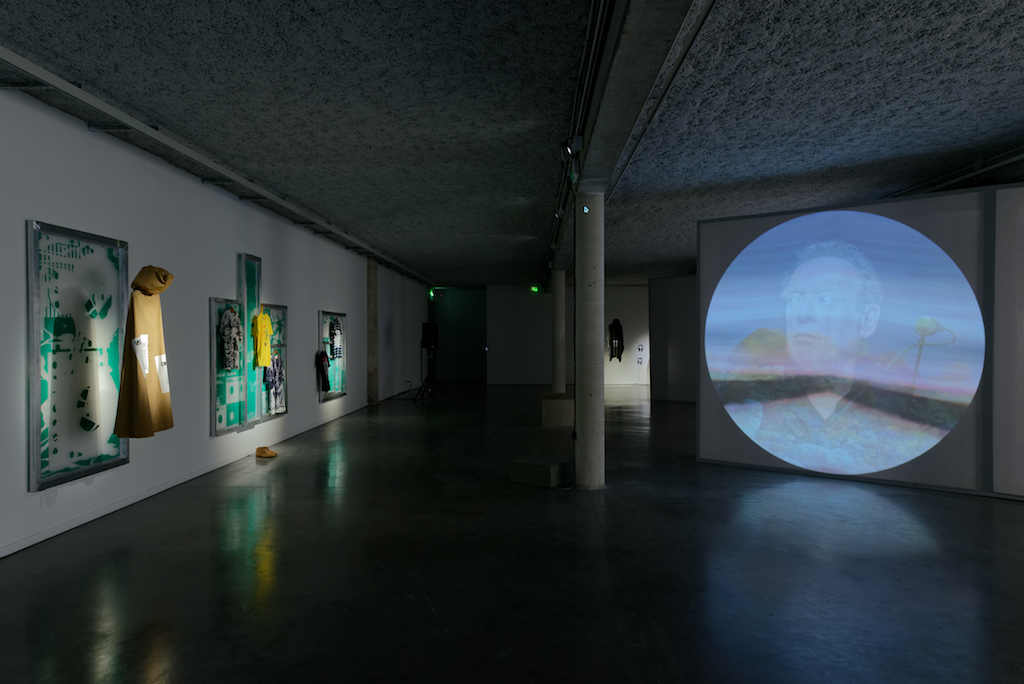 If the activities of Alex Cecchetti, Pierre Paulin and Maxime Rossi remain decidedly unusual in their challenges as well as in their forms, all three suggest in their own way a mobile way of thinking about the effects of the interface where desire is concerned: a desire for language, a desire for the other and, above all perhaps, a desire for representation.