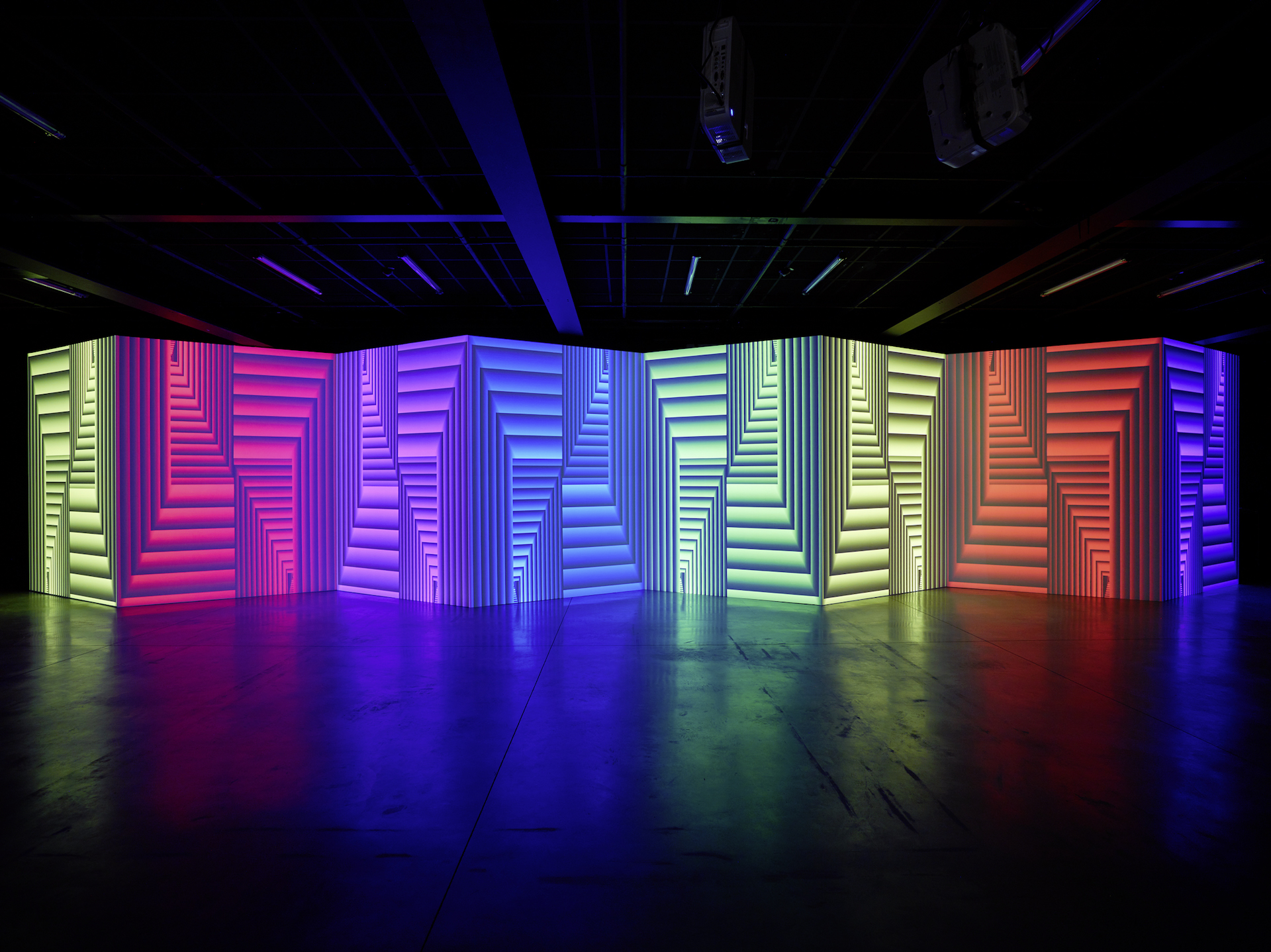 After embarking on their career under the aegis of a Gothic and post-romantic form of figuration, Florian and Michaël Quistrebert decided to set off in a new direction during a residency in New York in 2009. From that moment on, their pictorial research turned towards a study of abstraction, movement, and the effects of paint and light. In the city, with its modernist architecture, they found a rich repertory of forms to inspire them, but it is legitimate to think that the buzz of the art debate in New York about the state of abstract painting also played an important part in this change.

Their stay in New York in fact overlapped with the year that saw the publication of Bob Nickas’s Painting Abstraction: New Elements in Abstract Painting, a lengthy and keen analysis of the rebirth of abstract painting in the 1990s and 2000s. The New York critic pinpointed a close relation between this renewal of abstraction and the necrophiliac state which had overtaken painting since the late 1960s in the face of the emergence of Conceptual Art and performance. Following his reasoning, the re-emergence of a certain pictorial abstraction stemmed more or less directly from the “zombie-like” state peculiar to that medium. This is how the American artist Steven Parrino, quoted by Nickas on the subject, shed light on this idea: “When I started making paintings, the word on painting was ‘PAINTING IS DEAD’. I saw this as an interesting place for painting… So I started engaging in necrophilia… Approaching history in the same way that Dr Frankenstein approaches body parts…”1. Like the creature imagined by Mary Shelley, early 21st century pictorial abstraction seems to be the product of a clutch of references and nods to the past of that deceased painting. And the Quistreberts are developing an approach to art history which we might call “Frankensteinian”, to borrow the New York critic’s term.

Lyrical abstraction, Op Art and the ZERO group—three of the brothers’ major references—are being exhumed not so much out of concern over idealization as because of a need for appropriation. The brothers make use of them because of their power to fascinate and manipulate the way we see things, like visual tools with which to play at an often exaggerated and caricatural mise en abyme. In their installations, there are lots of quotations within a process involving destabilizing concertinaing, which brings out the differences and discrepancies between different vocabularies. So we might see in the title of their solo show at the CCC OD in Tours, “Zigzag”, an allusion to their many shifts in art history and their frequent changes of direction. In the black gallery earmarked for them, they play at erecting strange bridges between Op Art, lyrical abstraction, zen culture, psychedelics and visual music. In this windowless space, which is permanently painted black, the brothers propose a circuit conceived in a contradictory way, like a head-on encounter between visual saturation and zen minimalism. The space is thus divided into two clearly contrasting parts: on the one hand, a monumental psychedelic video installation and, on the other, a more measured presentation of a series of white paintings produced specifically for this project. Devised as a counterpoint to the visual noise of the video installation, the Rake Paintings are the result of a superposition of many different references: in them we can see allusions to the zen rakings of Japanese gardens, modernist abstraction, coded systems of spiritualism and occultism, and sacred geometry. This series is placed in the natural sequence of experimentation with paint and light, which was at the root of the paintings shown, in 2016, in their huge solo show at the Palais de Tokyo. We find the same ground-breaking idea of the Overlight works shown in the Paris art centre, although in a more sober and less polished version: using a heavy, thick form of paint to create light effects which alter the onlooker’s perception based on his position in the space. At the Palais de Tokyo they achieved that effect by way of an iridescent paint—the same used to paint car bodies—, but for this project they made use of an opaque white paste generally used in the building sector. The conspicuous depth of the paint as well as the choice of lighting render the perception of the geometric motifs of these paintings markedly unstable and changing. The Rake Paintings confirm the two artists’ liking for industrial materials, patently “not fine art”, as they are fond of describing them, the handling of which is constricting and often toxic. What interests them in this type of materials, over and above their corrosive nature, resides in the rigorous work method they insist upon. The impossibility of going back over their own steps represents an issue which endlessly re-appears in their work process, from their earliest New York experiments using paint sprays. So the method imposed by the choice of materials seems to be the way, for these artists, of achieving a working system akin to meditation—a mental state which they, in their turn, try to create in the viewer.

While the Rake Paintings series aims to give rise to this disposition of soul by way of a chromatically spare and minimal abstraction, the video installation borrows from optical art a visually very saturated vocabulary. Glowing and colourful geometric forms file quickly past in a loop, creating a sort of hypnotizing tunnel which zigzags over a length of 65 feet. The monumental dimensions as well as the rate of flow of the forms prevent the gaze from settling on any specific point by drawing it into an at once bewitching and disturbing back-and-forth. In accordance with their usual modus operandi, this installation is the outcome of a system of multiple layered quotations. If the first quotations to be imposed are those of the Op Art of the 1960s and 1970s and the psychedelic movement, avant-garde studies of visual music are a no less fundamental point of reference. In the tradition of abstract painting, the analogy between colour and sound constitutes a confirmed theoretical basis. We can see this, for example, in Kandinsky, who gave his paintings musical titles, and in the Orphic Cubists—thus named by Apollinaire paying tribute to the mythological poet and musician, Orpheus. Despite the fact that the video installation is sound-less, the artists regard this work as a sort of musical opera whose score is made up of forms and colours. We might thus compare it to the experiments of the Russian composer Aleksandr Scriabin, who included in the score of his Prometheus, the Poem of Fire (1910) a part for an organ which did not produce any sound but simply projected coloured lights matching the musical tones.

Their free, and at times irreverent, superposition of eclectic historical references refers us to Bob Nickas’s text mentioned at the start of our analysis. For the New York critic, the abstraction of the late 20th and early 21st centuries is the manifestation of a liberation and levity acquired with regard to the heavy weight of tradition. So the œuvre of the Quistrebert brothers might be legitimately included in this tendency which he calls ‘found abstraction’, because of the repertory of already existing forms which it uses as raw material. If this type of abstraction seems to share the same discussion of the author figure as the appropriationist movement of the 1980s, Nickas sees therein a basic difference: the appropriationists were interested in the notion of the double and the identical reproduction of the original, whereas the new generation of abstract painters is scarcely a mirror of what went before it. It assembles its multiple references in hybrid compositions which no longer have anything to do with the original. For Nickas, this is the beginning of the ‘anonymous abstraction’ which covers the author with an anonymous veil, along with the references he uses. Esssentially, this feeling of anonymity is not far removed from what we might experience when looking at the works of the Quistrebert brothers. From now on, if art, including art for art’s sake, as Steven Parrino clearly says—“I’m still concerned with ‘art about art’ but I’m also aware that ‘art about art’ still reflects the time in which it was made. Content is not denied… Content is obvious… Content is sustained in the air or the vibe of the work”,—is invariably the expression of the context in which it is produced, should we not see in this anonymous character the most current embodiment of the form of expression of our contemporary society?