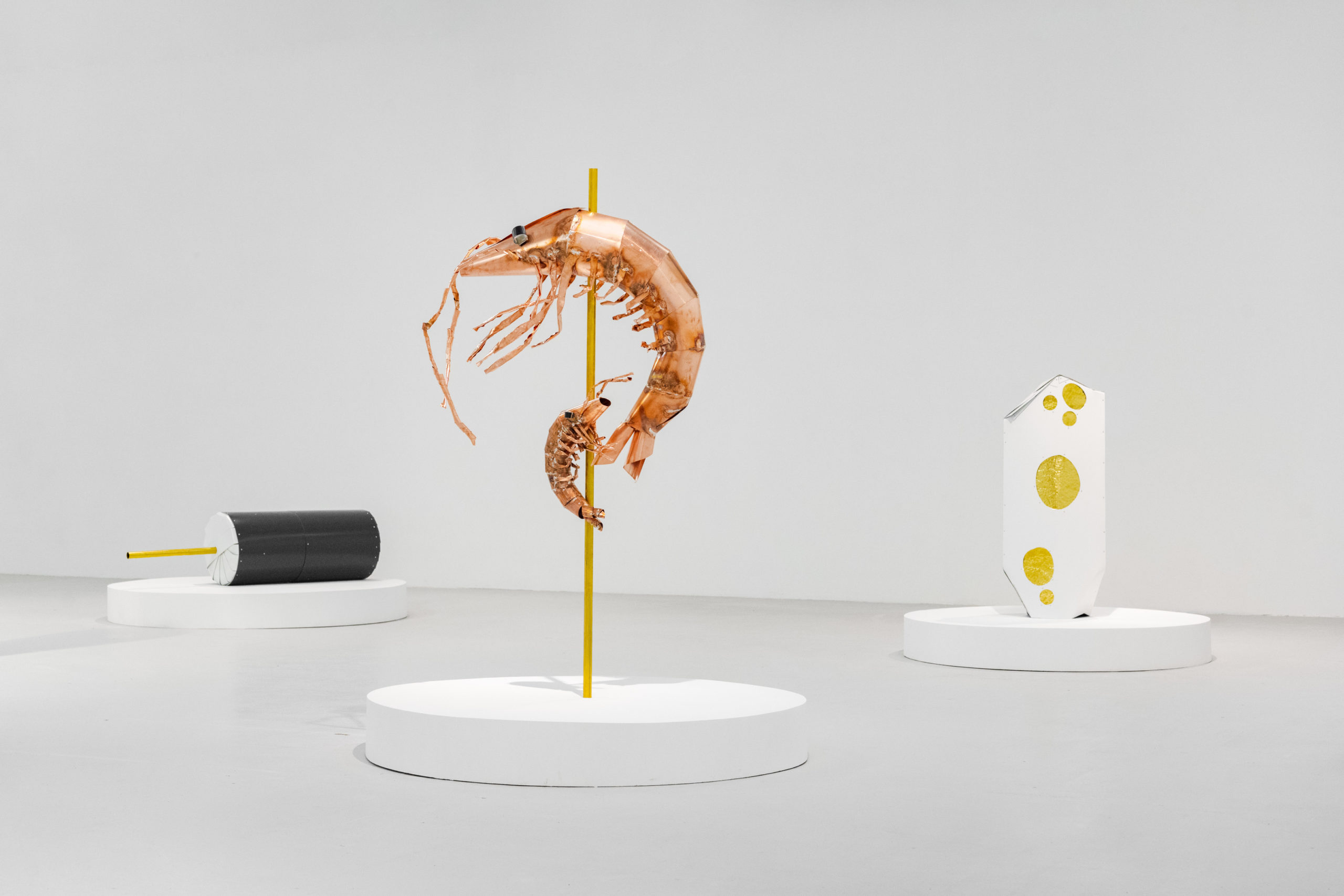 For Caroline Mesquita, a sculpture is never just a sculpture. The objects that she creates, which are at once musical instruments, parts of sets and leading characters in filmed performances, merrily refuse to be confined to a definite identity. Through her films and her installations, the young sculptress creates connections between different worlds, by doing away with the traditional boundaries between music, visual arts, theatre and dance. In so doing, her experiments call to mind the eclectic vocabulary of pioneering avant-garde artists of the early 20th century, such as Sonia Delaunay, Sophie Taeuber-Arp, Aleksandra Ekster or Lyubov Popova.

Since graduating from the École nationale supérieure des Beaux-arts of Paris in 2013, Caroline Mesquita has been pursuing her quest for a multi-facetted and changing identity. She has been questioning the boundaries of bodies and materials she uses, as well as the limits of the sculptural medium itself. The ceaseless deconstruction and re-assemblage of her characters’ identities acquire substance through the fragmentation of their robotic and uncoordinated bodies. This phenomenon thus reminds us of the protagonists of the play R.U.R. (1921), written by the Czech author Karel Čapek, who coined the term “robot”. Female dancers, musicians, mechanics, pilots, cooks… The characters of Mesquita’s sculpted fables regularly change their lives and statuses, in an ongoing attempt to escape from their fate and to shatter every possible type of social, geographical and gender determinism. For the artist, film is the perfect space for the subversion of hierarchies: here, sculptures are at the same time manipulated and manipulating. They gain the upper hand over their creator and appropriate her gestures, by caressing her, combing her hair, or cutting her up. The artist pulls her characters into a dance that is at once tender, erotic and destructive, and punctuated by the sound produced by the clinking and jingling of the metal sculptures. The choice of metal as her preferred working material responds to this quest for transformation and metamorphosis. Metal bends and unbends easily, can be re-casted over and over again, turned into a musical instrument, and, when it oxidizes, it changes colour in a way that is uncontrollable and independent of the artist’s wishes.

Mesquita’s tableaux vivants or living pictures are carnival-like pictures where hordes of Harlequins and Brighellas upset the order of the world we know, through grotesque laughter, rowdy banquets, dances and erotic exchanges. Between cotillions, streamers and confetti, these figures campaign for the construction of a multi-facetted and magical fairy world, thus referencing the etymology of the Latin word ferus which means something that is “wild” and “untameable”. According to the Jungian psychoanalyst Clarissa Pinkola Estés, intuition and the creative act are fairy-like qualities, yet forever thwarted and challenged by modern society and its rationalist way of thinking.1 From a psychoanalytical point of view, the fable is regarded as the ultimate forum of expression of these qualities, since the format of the tale is rich in archetypal figures and brings forth unconscious subjects for which the collective mentality has no suitable language. In the fairy-tale world, the body is a central instrument of knowledge and a door giving access to the realm of the invisible and the immaterial. Mesquita’s practice has a powerful link with the fairy-tale world because the main driving force behind her works is intuition and a sensitive relation to matter. She uses her entire body while she works, in order to press, roll and bend sheets of copper and brass. For her, each and every project offers the opportunity to tell a new story: should it be a plane crash and the erotic-cum-cannibalistic relations between the survivors and the creatures of a foreign world (The Ballad, 2017), the trials and tribulations of men working in the engine room of a luxury cruiseship (The Machine Room, 2018), a hermit’s retreat (La Casa dell’Eremita sul Naviglio, 2019), people getting together for a feast (Le Festin, 2020), or a stroll inside a human body filled with viruses, bacteria, intestinal flora, spermatozoa, and ovules (In Vivo, 2020).

Caroline Mesquita’s stories are often a response to the context in which they take place. This is the case, for example, with her solo show at the art centre La Passerelle in Brest. Back in her native city, the artist used the patio of this old industrial site, —formerly the warehouse of a fruit and vegetable wholesaler—, to install a monumental sculpture whose height rivals that of the art centre’s ceiling. Inspired by the place’s morphology, Caroline Mesquita decided to build the structure of a restaurant that is exceptionally closed for holidays, mixing the typical Brittany architecture with slate roofs with that of the witch’s house in the tale of Hansel and Gretel. Made of cardboard, this ephemeral construction is erected in the space like an apparition hailing from a faraway fairy-like imagination, which will swallow it up as soon as the story is over. The contrast between the fragility of the cardboard and the monumentality of this huge mock-up like sculpture allows the artist to incorporate the ephemeral in her working process. Her sculptures increasingly resemble fleeting mirages, inextricably bound up with the place in which they are conceived. This invitation offers the chance to imagine reunions, to gather family and childhood friends together at a large party celebrating her first show in Brest. Shrimps, goat’s cheese, Emmental, butter, herrings… mouth-watering petits-fours are ready in the room upstairs. The various kinds of food of excessive dimensions call to mind the problems of scale experienced by Alice in Wonderland, to whom, —through the effect of various spells—, the world always seems to be either disproportionately gigantic or tiny. The festive nature of these metal sculptures, even though not edible, can thus remind one of the gustatory sculptures of artists associated with the Eat Art movement of the 1960s, carried by Daniel Spoerri, and represented in France by artists such as Dorothée Selz and Antoni Miralda. The movement’s aim was to demythologize the artistic process by producing edible ephemeral works, thus turning food into pretences for creation.

With Mesquita, the theme of the meal is at once a reminiscence of Nicolas Bourriaud’s relational aesthetics, —which was of considerable importance for many of the students of the Beaux-Arts of Paris—, as well as a ritual and ceremonial moment dear to the artist. In a more or less implicit manner, the topics of sacredness and belief run through all of Mesquita’s work. This aspect can be traced back to her very first intangible and immaterial artwork, which consisted in a Dominican priest blessing a space. Fuelled by a variety of references ranging from archaeology, mechanics and science-fiction, the artist has gradually started to produce her own new forms, which have become the basis for new collective rituals.

In tandem with her show in Brest, Mesquita is exhibiting another solo project in the Brazilian Pivô art centre in Sao Paulo. A formal and conceptual continuity can be established between the two projects. The artist continues her exploration of an inner dimension relative to the body and what makes it function, by creating a new ephemeral architecture made of paper and which dominates the exhibition venue. If the sculpture she is showing at the art centre in Brittany remains an inaccessible object of contemplation, the structure she has made for the Brazilian art venue, which recalls the shape of a mother cell, is a dreamlike and fictional landscape that must be physically crossed. Within this protected space, the spectator is invited to watch a film which traces the story of a chimaera-like stroll in the human body, and which mimics the tone of a scientific documentary. Removed from any consideration pertaining to the political potential of the way of life of micro-organisms and bacteria, —as it is today very much in vogue in today’s contemporary art circles—, Caroline Mesquita simply prefers to draw our attention on the sounds, vibrations and textures of our own body. As both a messenger and a receiver of information, the body presented by Mesquita speaks several languages; it has an infinite number of ears, eyes and mouths. It is grotesque and likes dark humour. With her exhibition In Vivo, the artist continues to question hierarchies through the materials she uses: she abandons metal, —that noble material which, for years, has embodied the specific nature of her aesthetic vocabulary—, and experiments with the potential of a fragile and fleeting material like paper.

Is it possible, Mesquita wonders, to escape the fate that weighs upon us since birth? Looking at her, we would say that yes, it is. Being an artist allows her to walk through a house full of windows, which open each time onto a different horizon. And it also enables her to “dwell in possibility”, as Emily Dickinson would say.2