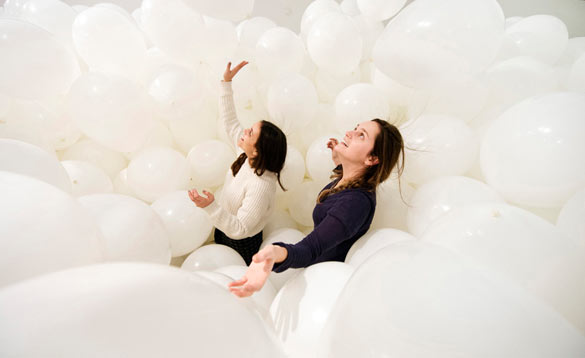 “What’s the point of it?” is, of course, a question that bears no answer. It is also the title of Martin Creed’s first major retrospective exhibition in the U.K., held at the Hayward Gallery. And it’s the closest the artist – who won the Turner Prize in 2001 with Work N°. 127, The Lights Going On and Off (1995) – has ever come to describing artistic production.

Perhaps all of Martin Creed’s work could be exactly what you do – should you come back to doing – after reciting such a nihilistic mantra one too many times. If the show’s title strategically counters the inevitable rhetoric question “what’s the point of it?” by asking it first, after revisiting Creed’s overview of his twenty-year career, it is nevertheless obvious that he has let go of complicated things to embrace simple ones. Artistic mannerisms, virtuoso splashes, philosophical complexities seem to have been discarded from Creed’s creations albeit letting them preserve a certain tautological trait. Work N°. 845 is just a neon sign saying “THINGS” – with a different color for each letter. It is difficult not to correlate it to the status of all the surrounding works of art as things-in-a-museum. But we have now been alerted to the fact that the emphasis is on the thingness of the work of art rather than on the artistic quality of the thing. The world engulfs everything Creed, or any other artist, produces anyway: Work N°. 232 is a neon sign acknowledging that THE WHOLE WORLD + THE WORK OF ART = THE WHOLE WORLD. 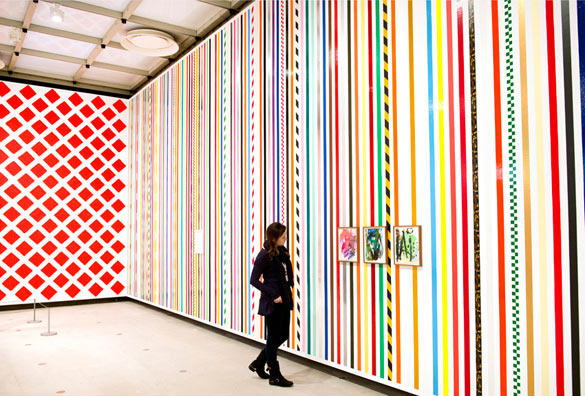 The mind goes on forever… whereas the work remains a manipulated, material, thing. Even if it is a materialized sentence. As such, Creed’s work can sometimes resonate like a monk’s allegorical joke or the product of a buddhist workshop: Work N°. 79 is nothing but some Blue-Tack accidentally bearing the fingerprint of the person applying it onto the wall. To Creed’s credit, visitors are often spotted laughing, knowingly; others seem at once intrigued and bewildered by a crumpled sheet of paper cautiously preserved under a glass vitrine or a column made of multicolored lego pieces (one of which, at the top, eyes the observer). It is not difficult to imagine the artist walking alongside a visitor, nodding in agreement with every single discombobulated comment.

The first room is therefore disconcerting. It upsets this – certainly simplistic – detached and humorous image we have of Creed’s work. There is the entrance, blocked by Work N°. 142 whose specificity is to be in the way; then there is a gigantic, rotating neon with the word MOTHERS that can decapitate anyone taller than 6ft6 (you find yourself trying to spot abnormally tall people), and, finally, we become excruciatingly aware of Work N°. 112, a set of thirty-nine metronomes tick-tacking relentlessly. On top of it all, the artist’s self-portrait – a photograph of a nice looking fellow. There are other works in sight but they seem off-topic, such as a painting, hung very high up. (Painting will be, incidentally, a key factor in the show.)

This first experience of the show is something like an assisted birth. The visitor has to make his way past a sofa, to face the possibility of decapitation and a considerable loss of orientation: the Hayward Gallery has ceased to be a familiar space. In fact, one of the most exciting aspects of the show is the way Martin Creed and Cliff Lauson, the curator, have rendered the Hayward’s space almost unrecognizable, finally visible, and playful. MOTHERS even forced the removal of a few cement pillars so that it could freely rotate.

The space having thus been altered and such a strong experience staged, we expect to be constantly provoked. And we are indeed, to a certain extent: the videos of people defecating or vomiting hardly leave us unmoved; in the terraces, competing with a breath-taking urbanscape, we find a brick wall or an aroused penis. Progressively, people’s reaction to the work becomes part of the work: a slow community of amused visitors ends up playing together in the last immersive work, a space where half the air is contained in white balloons. 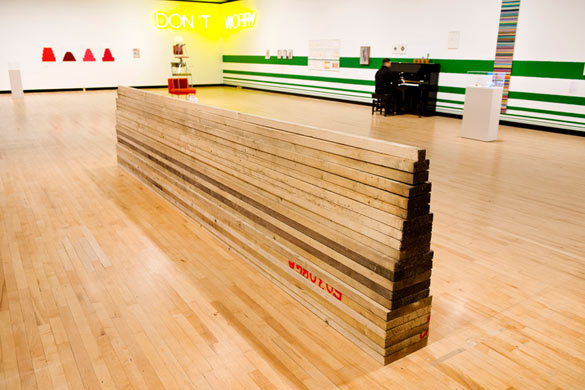 Tautology and the binary mechanics of the material world (on/off; up/down/; eating/puking…) falsely simplify chaos. Even order is presented as a failure albeit a comically effective one: piling is one of Creed’s aesthetic strategies. There are several works of piled tables, cardboard boxes, lego pieces. Assembling is another possibility: there are different kinds of balls, nails or cacti, some of them placed by size. Naming the works ‘works’ – yet another tautology – and numbering them is the ultimate form of ordering and ordering of form.

The experience of “What’s the point of it?” can be remembered as a series of work clusters interspersed with more emotionally strained pieces or of spectacular dimension such as the huge brick wall, the car suddenly come to life, the rotating neon. In that regard, there is a kind of emotional imbalance. And this is where the painting plays a very sophisticated role – almost too much so. There is mural and canvas painting, as well as drawing. Creed’s murals tend to be omnipresent, which irritates and colonizes our perception. They repeat the same ideas you find in some of the canvases and sculptures: they fill a whole wall with diagonal black lines, for instance; and by doing so, map the space, which is all the more overwhelming in such a deconstructed area as the Hayward’s. The canvases either represent people – they are portraits somewhat reminiscent of The School of London – or abstract techniques of filling the surface with patterns and repetitive gestures. 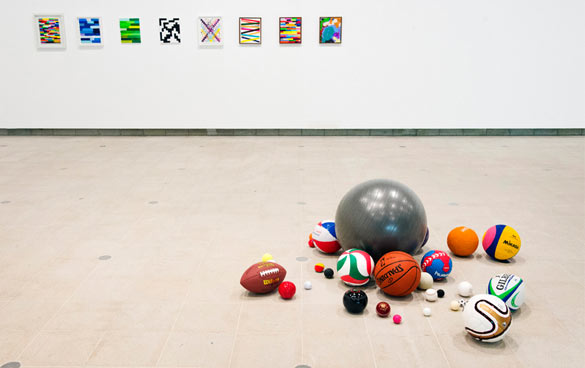 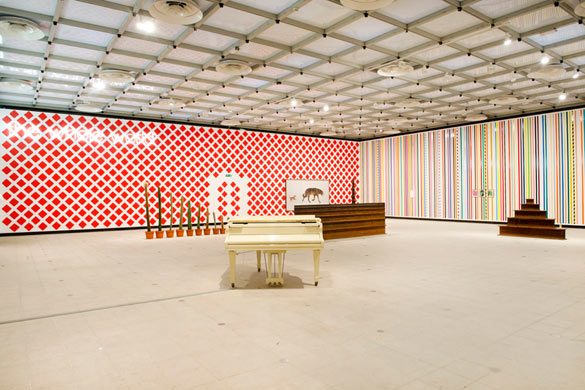 There is a bizarre feeling that the painting – just because it is painting – brings weight to the show, as if the artist was showcasing his repertoire of aesthetic choices. You can, for example, see paintings of what could be a symbol of piling up things, in several colors, or drawings using up the same marker of a random color like the balloons upstairs are a monochromatic fixation on the same light and cheerful object. It is supposed to be the ultimate provocation: the constant reduction of things to themselves is also made with painting, and video, and not only what we came to call installation and/or conceptual art.

Does the artistic skill – so spectacularly rejected in the rest of the works – come back to haunt us? Does Creed succeed in making unskillful paintings after a denial of everything that was important in art? And why is this denial so important? What do we do after we have let go of aesthetic rules? Oh, here I go. The question finally came to me: what’s the point of it? Well, the point of it all is unimportant when you are busy jumping with a brush in your hand to reach a canvas purposely placed too high.