The Worlds Turned Upside Down 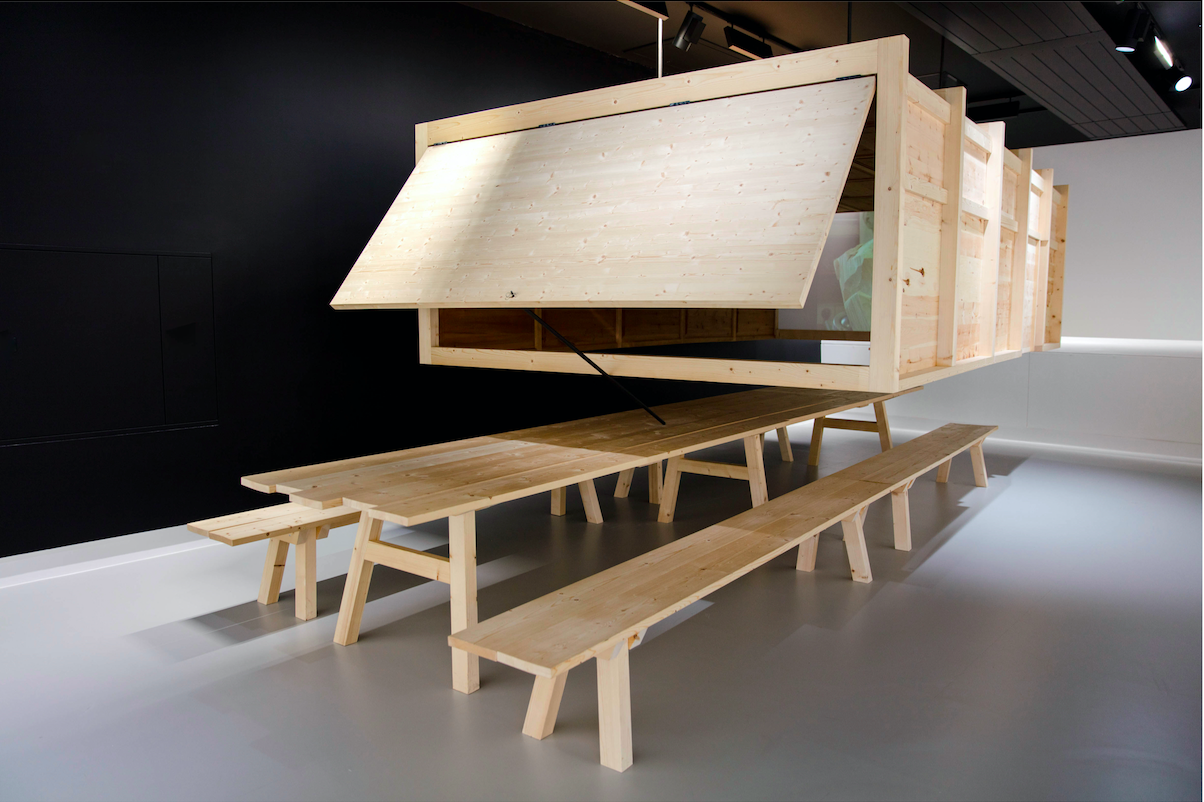 The BPS 22 has quite an enigmatic name, an acronym which calls to mind a new James Bond gadget more than an art centre: to mark its recent change into the “musée d’Art de la Province de Hainaut”, it has organized an inaugural exhibition which faithfully reflects its history as a militant institution and its solid foothold in a working-class environment. It has to be said that the city of Charleroi is a rugged, not to say rough and ready place, in the heart of a very significant industrial setting: the fear of gentrification that any installation of this kind seems to give rise to in other places does not seem to particularly frighten its director, Pierre-Olivier Rollin. This latter wanted to kick off his programme in his new museum spaces (in fact it has been more a matter of winning the adjoining premises making it possible to double the museum’s usable area) with an exhibition devoted to popular culture. Of course, such a concept encompasses broad conceptual and semantic horizons, subject to controversy, which its curator is trying right away to defuse: it is absolutely not a matter of talking about pop culture in the sense of that culture which English and then American artists made their favoured domain of investigation from the 1950s on, giving rise to the whole lineage we now know all about. Here it is rather a question of a popular culture in the sense whereby it emanates directly from the people, coming straight from the writings of Mikhail Bakthin, to which Pierre-Olivier openly lays claim. For this latter there is a “real” popular culture which appears through numerous events such as religious and trade union processions, and the carnival which is its most representative expression, although this latter has largely lost its transgressive power: this very living culture carries on in the form of rare occurrences which might be regarded as “temporary autonomous zones”, those famous TAZs dear to the thinking of the anarchist poet Hakim Bey. It goes without saying that popular culture must beware of any attempt at folkloric and/or touristic and consumerist re-appropriation which, in the guise of entertainment for some and a homage to tradition for others, merely adulterates its deep-seated meaning. In this respect, the curator is very careful to signal his intentions, avoiding all populist muddle and showing a measure of didacticism for the occasion: Gareth Kennedy’s piece (The Uncomfortable Science, 2014) illustrates the attempts made by the Nazi regime, during the occupation of Alto Adige, to take possession of the emblems of the native popular culture in order to Germanize them, thus referring to well known colonial phenomena. Another example, a huge wall drawing by Joe Scanlan (Le Classicisme : une introduction (extrait), 2015) takes up the thesis of Edward Said’s essay on the links between East and West, by applying it to the relation between contemporary art and popular culture: which is a way of saying that the relations between these two entities also proceed from very conflicting relations. The conceptual terrain broached in the show is in effect loaded and far from being stabilized; popular culture entertains with the élite culture relations made up of marked contrasts, but also constant borrowings. For the English sociologist Stuart Hall, quoted to back up the demonstration, the debate between high and low culture should only be understood by the yardstick of a dialectical filter and in the idea of seeing it as a metaphor of social relations. In the light of these premises, the exhibition “The Worlds Turned Upside Down”—whose title refers to a 17th century English protest ballad in which the issue raised is resistance to the royal desire to regulate Christmas festivities, and which would take part in the overthrow of the monarchy—sets up nothing less than an inventory of the relations between the artists and the theme.

In it we find one or two leading figures of ‘contest art’ such as the ubiquitous Jeremy Deller, with a series of photos from his Folk Archive, which is set up to the point of invading a whole wall in the museum, but also Gabriele di Matteo (Dal ragazzo che tirò una pietra, 2015) and Patrick van Caeckenbergh (Le Dais, 2001), whose empathy for processions is well known, and who knows how to hijack their codes with rare wit, by inlaying them, at the right moment, with decisive funny ingredients like this hilarious assemblage of slippers… We also find more expected heavyweights like Pascale Marthine Tayou, who proposes one of his monumental score-sculptures (Home Sweet Home, 2015), made up of many different bird cages and statues of settlers—a kind of allegory of post-colonialism asking to be reenacted every time by the curator. The almost local figure, Wim Delvoye of Ghent, with his aptly named Cloaca, brings a scatological dimension which does not seem out of place here, together with his colleague in transgression, Paul McCarthy. All these impressive pieces side by side giving the impression of having to do, at times, with a miniature indoor carnival… Beyond this procession, where the cohabitation is sometimes a bit rocky, we find ourselves looking at much more discreet pieces for which the link with popular culture is definitely less demonstrative, but just as relevant: so we find Ghada Amer’s canvases which subtly articulate female alienation and popular “culture”, but also other works which seem quite removed from the overall idea, like the very beautiful video of David Brognon & Stéphanie Rollin (The Agreement, 2015), in which what is involved is retracing “borders” in Israel, even if, okay, through the filter of football, it is always possible to talk about popular culture…