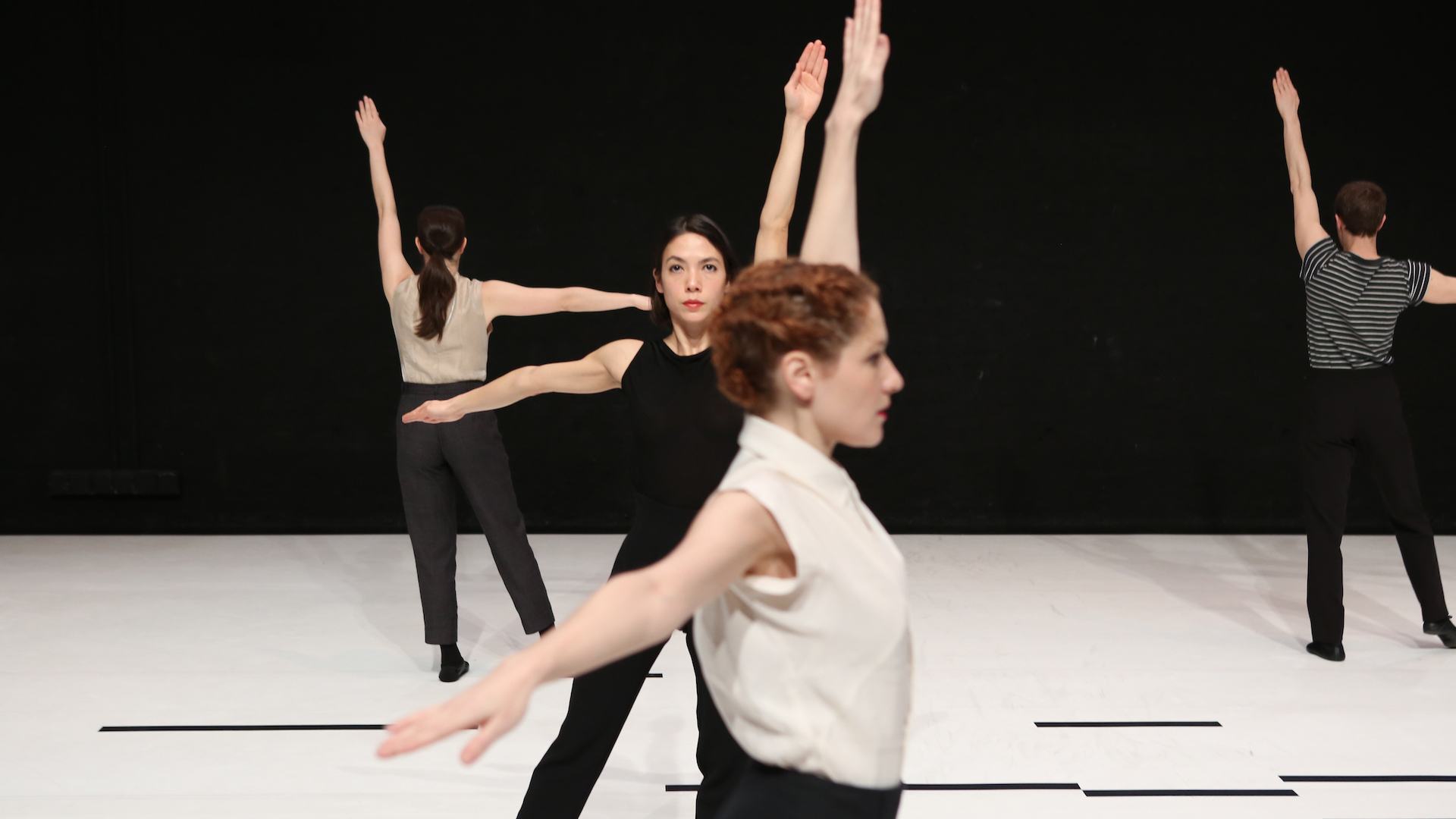 For the tenth year running, the Playground Festival has found its place halfway between the black box of Leuven’s theatre (the STUK) and the white cube of the M Museum, to defend an interdisciplinary programme of performances. The 2015 festival gave pride of place to Guy de Cointet, showing, by way of an exhibition and several re-enactments, that the Franco-American artist’s theatrical works were part and parcel of the extension of a visual way of thinking about the forms and status of language. The programme concocted this year implicitly continues to question the relations between writing and performance. It would seem that, for most of the guest artists, whether they be poets or exegetes, the text as graphic, grammatical or literary stuff represents the real playground. 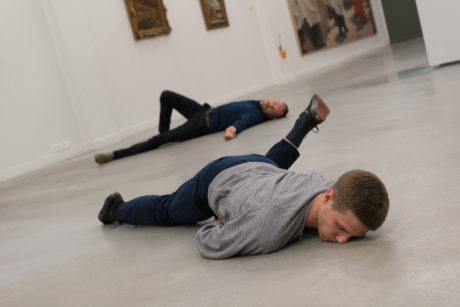 Acting as an overarching principle for the festival, A Sentence can be ours and ours is presented as an open reading circle within which a microphone is passed from hand to hand. Anna Barham hands a sheet of paper turn by turn to those taking part, on which a text relieved of its punctuation has just been printed. It must then be recited out loud, sometimes pausing for breath to give the text its own breathing spaces and, with them, a particular meaning. In a twofold movement of interpretation, a computer software package records the participants’ words and translates them into a new statement which will then be printed and reintroduced into the circle. The software’s faults and the cosmopolitan accents distort the original version which gradually degenerates, each time forming a new set of words in the readers’ mouths. The text and its computerized transcription also lie at the heart of the piece created by Liz Santoro and Pierre Godard, in homage to the communications theoretician Claude Shannon. When the public enters the theatre, four dancers have already been at work for two hours, trying to assimilate a complex linguistic code which has just been drawn by chance. They will communicate this phrase with a limited range of arm and leg movements, which evoke both the semaphore alphabet and the dances choreographed by Lucinda Childs. While the beat quickens, the adjusted sequence of movements gathers speed, as the words end up spurting from the performer’s lips.

While presenting projects informed by linguistic theories, with Derrida’s shadow floating above them, Playground has fun jamming learned discourse. In the tradition of the performed lectures which are part and parcel of the Circonférences Biennial at Château-Gontier (F), Pedro G. Romero and Filiep Tacq present their reflections about Mallarmé’s poem A Throw of the Dice will never Abolish Chance, and its obliteration by Marcel Broodthaers. In 1969, the Belgian artist transformed the poem’s floating layout into an abstract composition of black stripes: here again, a questioning to do with the space of the text soon interrupted by the clickety-clack of heels ringing out overhead. The flamenco dance performed by Israel Galván, invisible at first, because it happens upstairs, hangs over the words of the two participants, while it prolongs their reflection about the poem’s visual and acoustic rhythm. The other arena preferred by the guest artists is that of the mediaeval Flemish art collections held by M Museum. Alex Reynolds here conceives a piece for audio-guide, an opportunity to re-think the “mediation” discourse coming out of the headphones. Based on a principle tested at the parisian Crèvecœur gallery in 2012, a male voice directs the listener like a camera, telling him about the tracking shot movements and close-up shots, while Elma’s voice tells how, after keeping an eye on the rooms, she returns to haunt the museum by night and scratch the surfaces of the pictures. The eye one casts on the works is no longer informed but immediately narrated, and framed to end up nose-to-nose with the employee in question; unless this is just a statue among others? 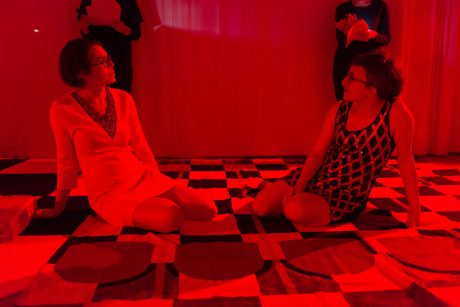 The idea behind the festival is clearly to flatten the platforms so that performances can happen everywhere. So it is surprising to note that in some cases we have left the theatre, the better to return to it. Inside the white cube, the works of Mary Reid Kelley and Marnie Slater exhume mechanisms and repertories of classical theatre. This latter presents By written I mean made, a deliberately clumsy piece whose dialogue between the two leading actors is inspired by the archives of Claude Cahun and his companion Marcel Moore. The actresses regularly switch roles and the prompters take over, making a permanent shift over the identity of the characters in conversation, sometimes Peter, Mary and Madonna, sometimes female, then male. With its bourgeois scenes of married life and its travesties, this is a kind of queer vaudeville that Slater orchestrates.

Mary Reid Kelley for her part revives the tradition of cardboard décor and the plethora of stage props in a series of films screened by the museum. Well backed up by green screens and animation technologies, the works of the American artist and her husband are nevertheless invariably akin to black and white lo-fi collages, within which, made up, she performs all the parts. Her model is situated rather at the level of Greek tragedy with masks and female choru, as is illustrated by The Minotaur Trilogy. In the re-reading of the myth in verse, the minotaur, here half-woman, half-bull, wanders in a tagged labyrinth while Dionysos, clad in a Lycra body printed with an abundant fleece, merrily tipples. The museum had the bright idea of editing the film’s script, which makes it possible to appreciate the rich rhymes and puns at work. When the wine runs out, Ariadne exclaims in despair: I have run out of raisins to live. 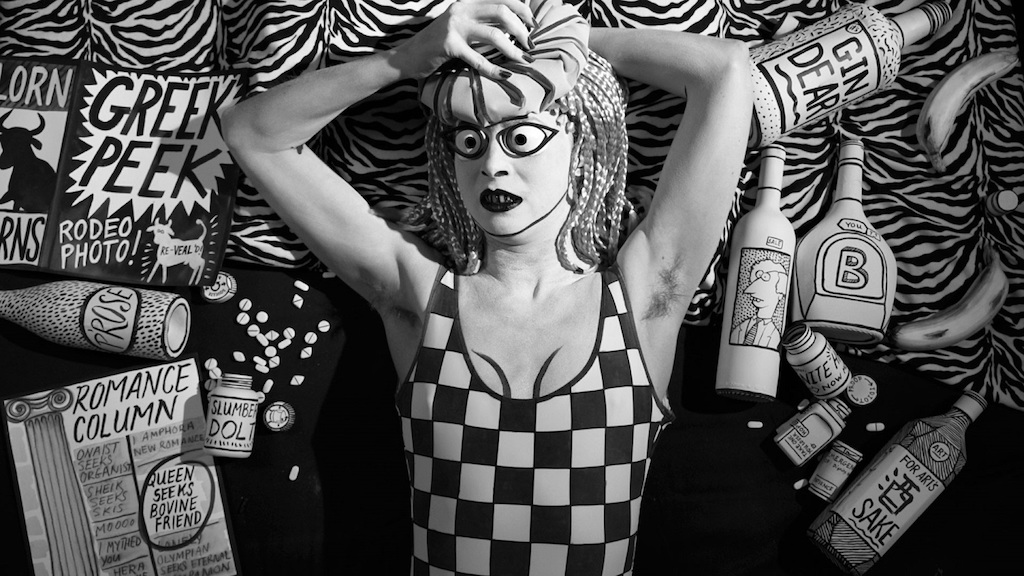 Within a programme which plays with the deconstruction of communication systems (textual and stage-related alike, it is finally important to observe several attempts to re-edify the collective. They seem all the more relevant in a city which, let us recall, split, at least fifty years ago, into two distinct linguistic entities (Dutch on the one hand, French on the other), and whose present period of withdrawal causes its polyglot past to be more and more forgotten about. In the bowels of the university, in the midst of plaster replicas of antique statues, Sarah van Lamsveerde tries to summon vanished limbs. She invites the small group of spectators to imagine the missing parts of the sculptures, and makes them appear in the reflection of a mirror, tickling the ghosts of shared traumas. Precisely where the microphone passage in Anna Barham’s work timidly brought forth a collective author, in the reserves it is fragments of bodies which move about between performers and participants. At the end of the performance, the artist hands the gathering bits of meringue so white and rough that you might take them for plaster. Acting like profane communion hosts, they briefly weld this community of spectators together, before the lights go on again.