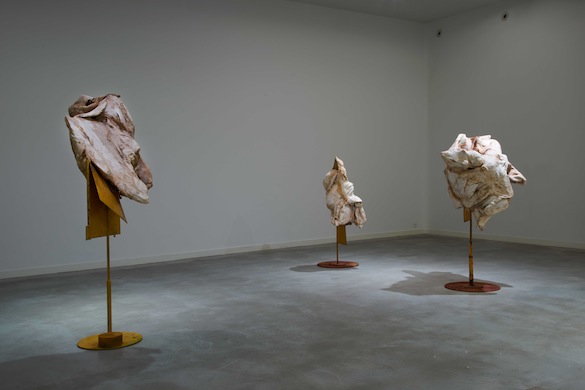 The Belgian artist Peter Buggenhout has left painting far behind him, deeming it too symbolic for his liking. His first retrospective show at the Louvain museum does not include any at all, giving pride of place, as it does, to his Dantean sculptures, prey to the disarray of ongoing recasting.

His œuvre, which is strapped, bound, set on stands and stoutly secured, voracious, and made of flesh, blood and dust, advances in a slow and irrepressible movement which its apparent weight does not manage to counter. It grows thicker, and becomes deformed with time. “What you see is just a perpetually changing snapshot”. The sculpture is traversed by the ebb and flow of a reality that is forever being reformulated. In his work, Peter Buggenhout contrasts the authoritarian, durable and monolithic world with a vision governed by transitoriness, self-management, and indecision.

The exhibition circuit at the M crescendoes, from the disturbing Mont Ventoux series—animal bellies perched on what seem to be navigational buoys—to the latest pieces in the series The Blind Leading the Blind—referring to that group of blind people on the edge of the precipice in Pieter Bruegel the Elder’s picture, The Parable of the Blind (1568). Is the work of art still operative in the face of this disoriented world? Can it defy appearances and offer a complete and continuous vision of the world? According to Petrarch in The Ascent of Mount Ventoux, it is impossible to embrace everything, even from a lofty viewpoint. So should we confine ourselves henceforth to blindness? “Let us proceed in stages”, Buggenhout seems to be saying. First of all, familiarize yourself with the darkness of his world, then grope your way forward through the rubble. Endeavour to have a look and, if the shock is too great, find refuge in the hollows of our empty eye sockets. 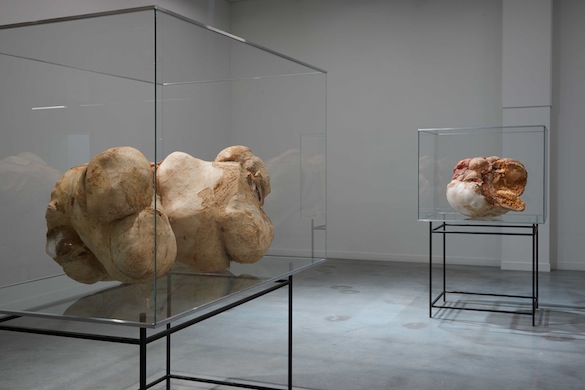 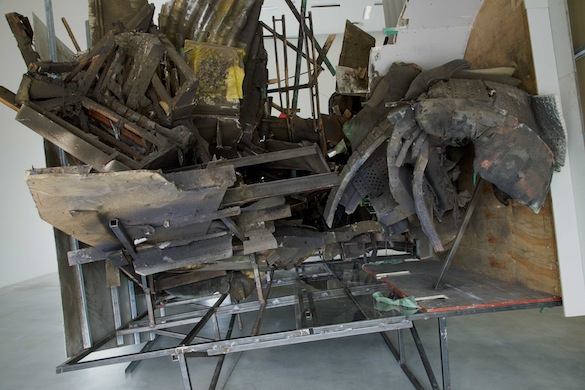 For the Gorgo series (2015), Peter Buggenhout  arranges an encounter between dried pig’s blood, horsehair, and various abandoned materials. His informal sculpture refers to the desire for declassification (in relation to all existing taxonomy) formulated by Georges Bataille in his short essay Abjection and Miserable Forms.1 There is no dearth of analogies, however. The exhibition catalogue2 makes an inventory of reference images for Buggenhout, and summons the cathartic works of Otto Muehl (Kaiser Obersdorf, 1971), Paul McCarthy’s burlesque videos (Painter, 1995), and ritual objects bearing traces of offerings and libations (boli votive sculptures of the Bamabara of West Africa).

Like these African fetishes, the series The Blind Leading the Blind is completely covered with dust. This layer forms the “cement” of the piece and, here and there, reveals the colour underneath: that of cut-up foam, fabrics with metallic highlights, the debris of caravans, and children’s toys. The objects are not used for their own sake, but taken into a kind of poetic emptiness. In the Mont Ventoux series, the skin of the cows’ intestines and stomachs holds an absolute refinement in the roughness of the viscera.

Kept at a distance, the visitor travels to the core of the works by way of thought. With the exception of the piece made for the exhibition “Inside” held at the Palais de Tokyo (initially devised to be comprehended from outside, the installations mark a threshold that is at once psychological—don’t get near the works sullied by the materials composing them—and physical, rendered material by these not very pleasant bristling sculptures (The Blind Leading the Blind #67, 2014) and these insurmountable walls (The Blind Leading the Blind #65, 2014). Once they are placed under glass and made inoffensive, the visitor starts carrying out an autopsy, keenly analyzing them like specimens on a laboratory table. The interplay of reflections in the large juxtaposed showcases multiplies the possible readings. Grottoes, rocks, sea beds, wrecks… The imagination works flat out. These composite structures made of many different aggregates, subjected to an inextricable chaos, tell us nothing about their beginning or their end. They are thoroughly autonomous, without any sense of pre-established reading, or any specific viewpoint, and avoiding any logical system. These forms seem to display themselves on their own, with no human intervention. The seeming laisser-faire calls to mind the nonchalance of a certain Marcel Duchamp, assisted by Man Ray, the two of them having gone off for lunch leaving the shutter open on The Large Glass, which had been vegetating for several months in the artist’s studio (Dust Breeding, 1920). That particular dust, just like the rubbish collected in the streets of Berlin and Hanover by Kurt Schwitters for his Merzbau, and the objects found by Edward Kienholz and Robert Rauschenberg and, more recently, by David Hammons (Central Park West, 1990), are fetishized. What matters is what they say about our formerly triumphant society, today down for the count, but still very much alive and kicking.

2 We did it before, we will do it again, essays by Selen Ansen and William L. Rathje, interview with Eva Wittocx, curator of the exhibition at the M, and fragments of writings by Peter Buggenhout, Jnf Editions / Les Editions de l’Amateur, 2015.