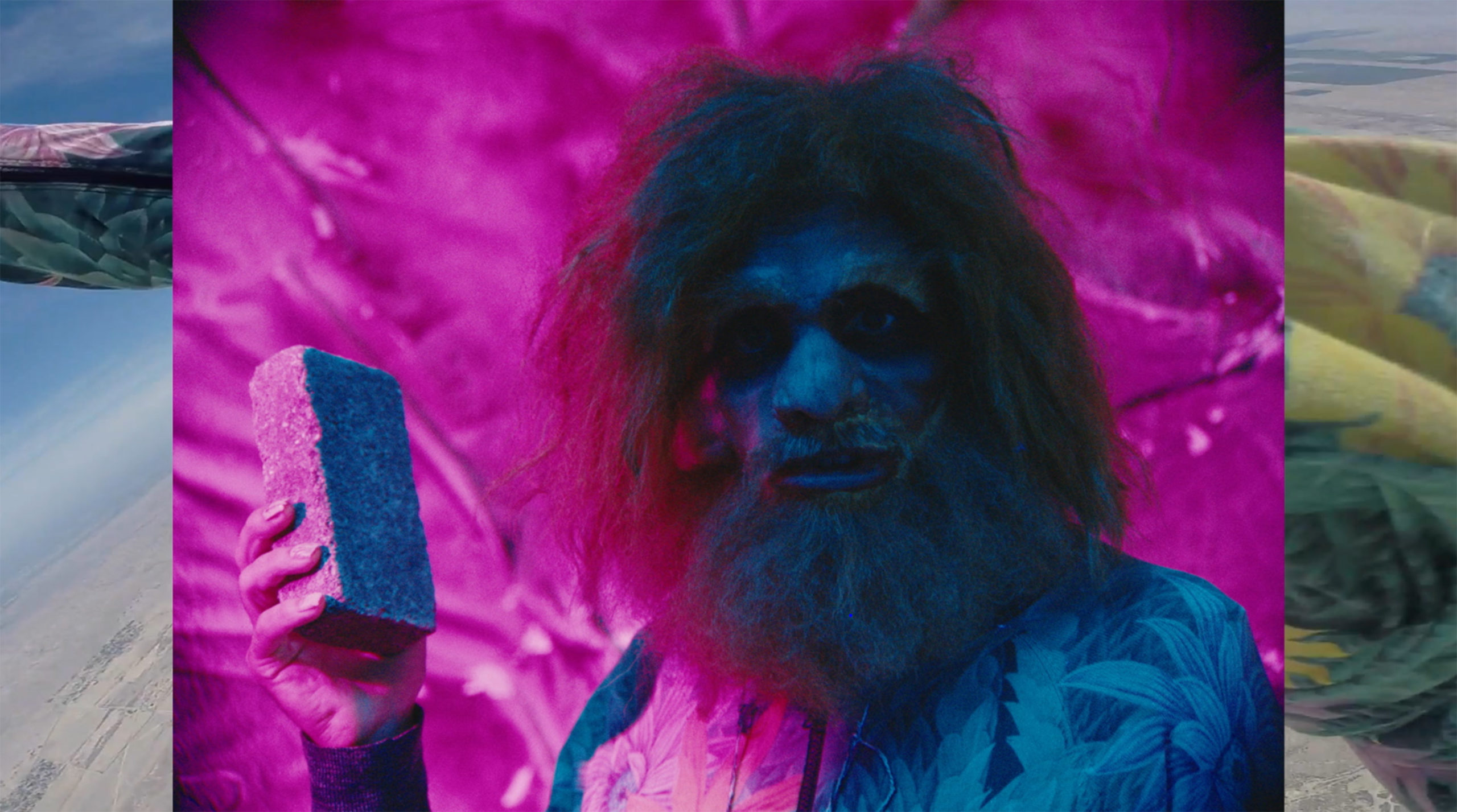 “I think there is a surrealist class consciousness that runs through my work and the Neanderthal is an articulation of that.” NM

When we penetrate an exhibition by Nathaniel Mellors, we have the feeling of “déjà-vu,” like a cosmic Matrixian glitch– the feeling of already having been in that space all the while discovering an unknown universe. This feeling can perhaps first be explained by a certain formal kinship between his immersive installations and cinema museums or even tours of old film studios that reveal the backstage, sets and accessories. In “Permanent Presents, ”– a title which confirms that we are right to suspect a cosmic glitch– the rooms are immersed in a semi-darkness. The four films are projected on large screens and occasionally accompanied by objects (almost too) quickly as props from the shoot. At the entrance, for example, a realistic, life-size Shakespeare head is enthroned, but in an acidulous candy color, which we recognize– not quite identical, but almost– in the neighboring film on a feast table. With Nathaniel Mellors, art is eaten; this will be fully discussed further. In another room, two silicone heads are exposed as masks and moved by a small motor that makes them disturbing, as in Freaks.[KP1]  Elsewhere, paintings converse with the screens as they appropriate motifs from the films. Lingering a little, one begins to understand that the film-object relationship is not as obvious as in a film museum where the mythical objects of mythical scenes of mythical films pretend to be real. Mellors is an artist with a distinctly visual practice, who works with film by introducing objects he makes into his films.[KP2]  And even if in the history of cinema many prop makers were artists– notably in Italy at Cinecittà– their production had a subordinate status to the film. In Mellors’ case, as in Paul [KP3] McCarthy’s, the objects he is close to are not fully autonomous, but far from being insignificant: even from an aesthetic point of view, one may recall the film Heidi, made in collaboration with Mike Kelley. The artist reveals the backstage, claims the notion of decor, leaves the handiwork and trickery visible, in a way that nevertheless values the objects, almost as much as the people. Further, when he tells how he came to cinema, he explains that he “wrote scenarios for sculptures and made sculptures for scenarios.”[1]

The artist cultivates a truly intriguing relationship to cinema.

In the exhibition, four films from different years are brought together. Three twenty-minute long short films The Sophisticated Neanderthal Interview (2021), Neanderthal Container (2014) and Neanderthanl Crucifixion (produced by the Frac Bretagne, 2021) are shown alongside the first of an ongoing, four episode series, Ourhouse (1 hour long, 2015-2016). What all of the videos gathered here have in common is that they feature a character of increasing importance in Mellors’ work: the Neanderthal Man. It is thus no longer in a cinema museum that one can imagine they have landed in, but rather a museum of the fantastic man. The four films confront prehistory– or rather, a certain approach of this period, elevated through color (there is a lot of orange) and mixed with the present. The operation is made possible by going back and forth in time by a mysterious vehicle that we discover throughout the screens. The cosmic glitch becomes even more clear. With Mellors, art is eaten, digested, and makes us go from our time to prehistory passing through a toilet: that of the most ordinary of appearances yet as if it had fallen from the sky in Ourhouse. Originally from the UK, Mellors was influenced by the “historical” Monty Python films (Life of Brian, Holy Grail…), as well as by the BBC series Doctor Who, where the protagonist travels through time on board a time-space ship with the external appearance of a telephone booth. The artist has adapted the object that serves as a vessel to his favorite digestive themes.

Let’s summarize the forces at work because the matter is becoming complex: films, objects, paintings, apparent rigging, a Neanderthal (or several?), contemporaries, a white earthenware toilet as a time travel machine… Mellors’s universe is abundant: one loses oneself in it as in a whirlwind (and still, not everything has been said!) but it is in reality skillfully constructed and nourished by a thought that could not be more rigorous. Everything goes off in all directions while still all fitting together. At the center is the figure of the Neanderthal. It is constructed from the artist’s analysis of the most informed on current research and the most relevant as to the ideology that has guided the specialists. According to him, the Neanderthal has played the role of the Other: the one on whom we project everything we do not want to be, to justify the crucial moment of the revolution of agriculture in the Neolithic period that led to sedentarization, or the beginning of the land ownership. “The concept of the Neanderthal was developed by anthropologists at the end of the nineteenth century and presents a colonial, racist mentality close to the ape-man or the “missing link,” and to European fantasies about exotic peoples and creatures. The Neanderthal man is conceived as a being totally distinct from Homo Sapiens, he is objectified and slandered.”[2]

The first film in which this figure appears is the first one on entering the exhibition: The Sophisticated Neanderthal Interview. It outlines these ideas through a discussion with a modern man who visits the prehistoric man, dressed in a blue outfit reminiscent of 1970s science fiction series. He looks foolish. Could he have traveled like this in the past? To tell the truth, the Neanderthal seems more cunning, although he is wearing some kind of orange Crocs. Wouldn’t it be rather him who traveled to us? Cosmic glitch. He welcomes the interviewer in front of his cave-home: a pure film cave, as it is a place frequently used for filming, in Los Angeles’ Griffith Park, near some well-known studios… In the film that follows (if visitors decide to dive into the left side of the exhibition), Neanderthal Container, the character becomes more and more eccentric, transformed by psychedelic experiences. Mellors’ penchant for 1970s music culture and its myriad colorful aesthetic is expressed without restraint, and the Neanderthal is quite delirious. In the back room, episode 1 of Ourhouse, provides an “explanation” for all the time shuffling we’ve seen with these important details: the trips are triggered by the flushing of the toilet– the origin of the famous cosmic glitches– but they also produce an effect on the passengers who enjoy going back to prehistoric times. On every journey, they transform little by little into Neanderthals so much so that there is modernity in prehistory and prehistory in modernity… One must finally retrace one’s steps to see the last film, produced for the exhibition, which constitutes a variation on the footsteps of this character that we are now able to better understand. However, he appears here in an exceptional way in the guise of a man (who bears a slight resemblance to Mr. Potato Head) sculpted in modeling clay and animated in stop motion. The artist has always used varied techniques, making films in 16 mm as well as with a smartphone. In this case, it was the conditions of confinement– the project having been launched in 2020– that led him to adopt the solution of a film that can be made by oneself and in one’s room, but which also allowed him to explore rich solutions in the continuation of his experiments between sculpture and cinema. “In many ways, I see this work as a filmed sculpture. It’s like painting with a three-dimensional sculpture,” he says, affirming his inclusion in the field of art rather than film.[3]

Mellors is not a trained artist that would have ignored cinema, its economy and distribution. Nor can his work be spoken of as an artist’s films. He is rather an artist that works with film, just as there are artist-photographers and artists who work with photography. An argument in favor of this interpretation is the role of art as a subject of reflection and discussion in all the films, especially the last one, where the Neanderthal is an artist swindled by a gallery owner. The latter appropriates his ideas and creativity, which seems to be a criticism of the current situation… Thus Mellors challenges, on the one hand, the claim that art is the prerogative of Homo Sapiens and, on the other hand– and through the distance provided by his character– addresses the problems that plague the artistic ecosystem today, which he identifies as the “neo-liberal problem of art,” “who makes it, who consumes it, and who owns it.”[4] In the film, the Neanderthal artist ends up crucified, not without having avenged himself in advance, according to a Dionysian conception of his practice: “I always thought that eating someone was polite, like, a way to show appreciation, a tribute… eating them and then sculpting or painting them.” And so isn’t this also what the paintings that accompany the films on the walls of the exhibition tell us, as if secreted and produced by the Neanderthal within artist?[5]

[5] In this text I have relied heavily on the fascinating interview that Mellors did for the exhibition catalog because it helps to link elements that appear scattered and abundant in the exhibition, but I am well aware that one must also let go and accept the most far-fetched hypotheses, because they are perhaps the most satisfying in the end…