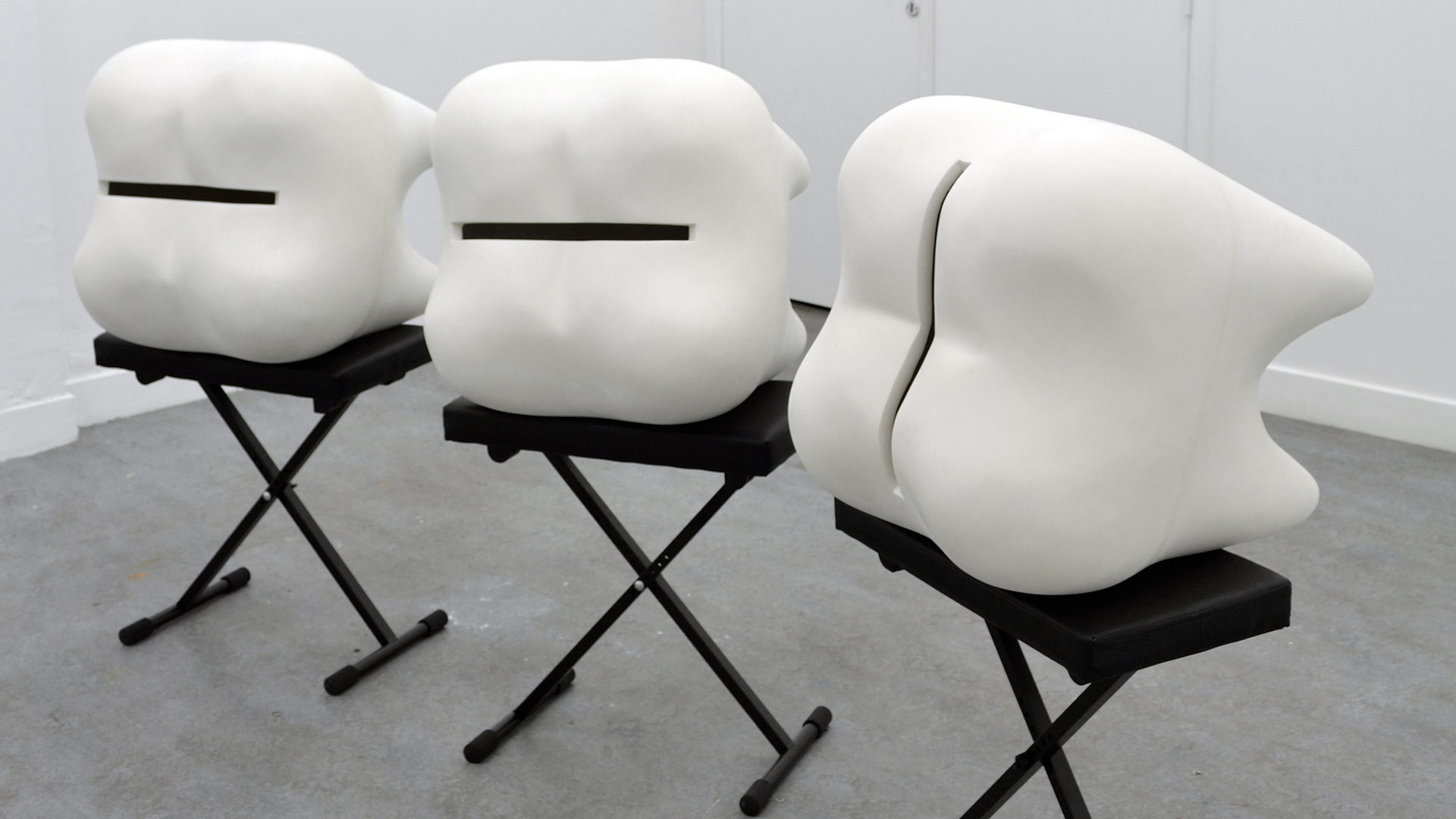 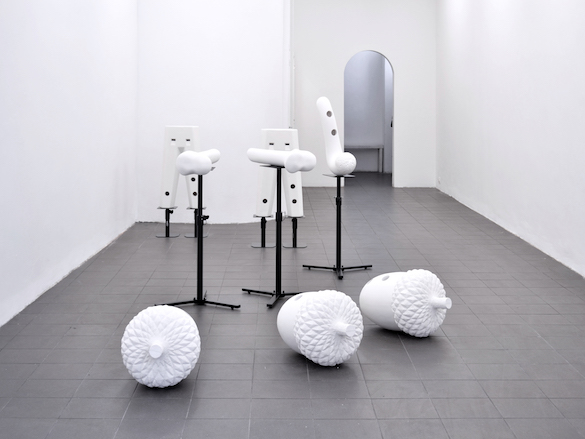 “Early Development of Calculus” consists of various numbers and configurations of familiar looking objects made of plaster: an acorn, a tooth, a bone, (possibly) a pipe and something that calls to mind a laundry pin or some sort of angular trousers. The objects are much larger than their presumable real size and have an anthropomorphic quality about them. It is not that they look human. They look as if they could interact with humans, or rather stand up to humans. Their size does not make them easy for humans to “use”, they resist human domination. Yet they offer themselves, despite being opaque and mute, as musical instruments do – through holes and slits in their bodies, placed to fit fingers or mouths, to let off air or build up resonance. The trousers could be flutes, the teeth, temple blocks, the pipes, saxophones. They stand arranged as in an orchestra, or lean against sofas. The orchestra as a form of organization is also suggested by the text accompanying the show, written by French artist Lily Reynaud-Dewar. Her fictional dialogue between instruments suggests a possible backdrop for the silent and obscure lives of the objects on display. It presents the orchestra as a radical collectivity on the verge of collapse – work, life and love altogether, threatened by the eroticism of new technology (an instrument falls in love with a composition software and wants to modernize the orchestra). 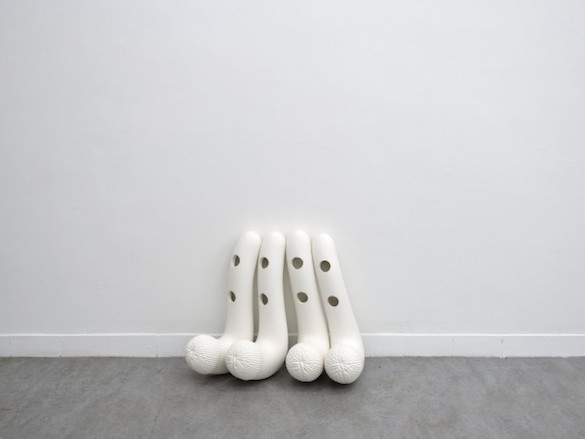 We might also wonder what other, less fictional lives these objects might have, what is their actual life as art objects, their place as sculpture?

The exhibition, but even more so Gaillard&Claude’s earlier works remind us of some of the ways sculpture evolved in the 1980s, in its use of a large range of approaches and references such as Postminimalism and Pop, domesticity and design, commodities and architecture, images and symbols, in a general move towards blurring boundaries and escaping definitions. These were some of the challenges in the works of Haim Steinbach, Bodo Buhl, Richard Artschwager, Didier Vermeiren, Tony Cragg, Jan Vercruysse, Allan McCollum, Ludger Gerdes, Nick Kemps, Richard Deacon, Hubert Kiecol, John Armleder, Gary Kuhn, Langlands & Bell, Lili Dujourie, Jan van Oost, Guy Rombouts, Fortuyn/O’Brien, Tomas Schütte, Basile Bustamante and later Bernard Bazile and Jean-Marc Bustamante, Étienne Bossu, and Alain Séchas, among others, and mentioned here in no particular order. (It is worth noting and maybe some day exploring, that this tradition of sculpture as a reference to the everyday through a mixture of pop imagery and minimalism, as well as design, has remained strong in French art and can be still seen in the works of a relatively younger generation of artists such as Bruno Peinado, Mathew Mercier, Frank Scurti, François Curlet, Betty Bui, Didier Marcel, and Stefan Nikolaev, to name but a few.) 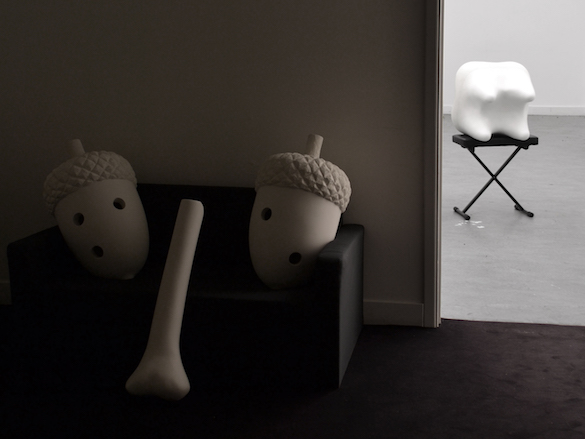 The collages of elements and the uncertain, mutating objects were a kind of sociological data of the times. They represented the “simulacrum” of capitalist reality and reflected on industrial modes of production, commodity aesthetics, desire, but also history and the space of art in relationship to spaces of consumption, be it private or public. More importantly, what was at stake in the developments in sculpture since the 1970s onwards, was art’s relationship to habitat – both that of humans and of artworks. In an article from 1986 with the title “Art as Design / Design as Art”[1], Dan Graham discussed the work of several artists from the earlier period of the 1960s and 1970s, and the way they addressed the space of art as a specific habitat. These artworks functioned within the tension between the way objects were produced and used in daily life on the one hand, and exhibited and related to the sphere of art on the other. Graham looked at works by Oldenburg (Bedroom Ensemble, 1964),  Flavin (Minimal Art in its reference to the gallery space) and Chamberlain (foam sculptures and mattresses), which played with the design of spaces and/or furniture, and collapsed living and artistic space in the gallery area. 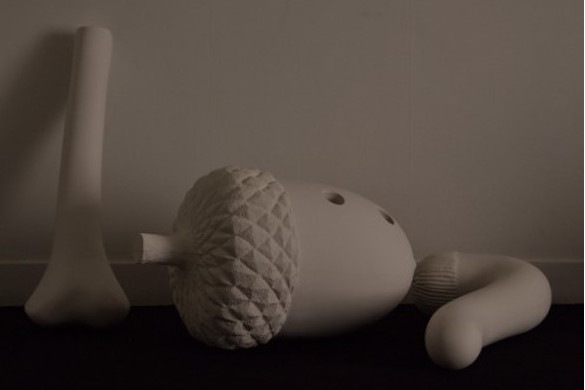 Conscious of this development as a constant process, Graham began his article with a quote by Benjamin about the modern separation between working and living spaces : “For the private individual, the place of dwelling is for the first time opposed to the place of work. The former constitutes itself as the interior. Its complement is the office. The private individual, who in the office has to deal with reality, needs the domestic interior to sustain him in his illusions.”

The signs of a fading separation between these spheres as described by Benjamin were already obvious for Graham, and he noted their further erasure in venues dedicated to art – the gallery as a space for exhibiting works, but also as a space for work. A gallery is also an office, an actual working place as much as any other space dedicated to producing or displaying commodities. The secluded domain of illusions which Benjamin attributed to the bourgeois private interior was by that time nowhere and everywhere simultaneously. 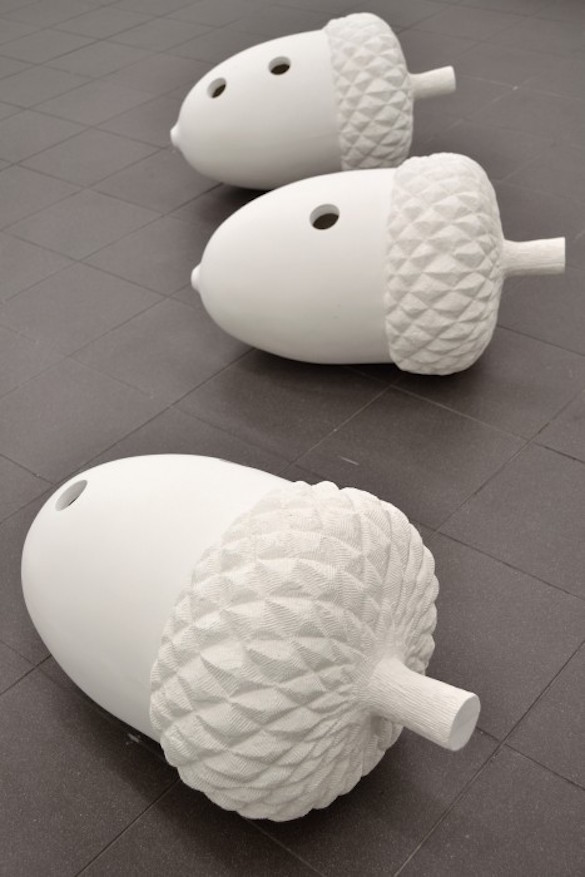 From such a historical perspective this new work by Gaillard&Claude looks more closely at the “theatrical” mise-en-scène of sculptural installations from the 1970s, rather than the condensed, metaphorical displays/signs of the 1980s. However, the opaqueness of the objects and their animist qualities seems to reject the public as an active part of the construction of meaning and ultimately a participant in this “theatre”, which was an important part of the discourse in the 1970s and 1980s. If the viewer back then was expected to activate his or her own experience of late capitalist society through the clues given by the objects, in Gaillard&Claude’s exhibition, and in accordance with our current object-oriented discourse, spectators remain uninvited, unless they are able to identify themselves as an object among others. This is a theatre of and for objects, they are both the actors and the spectators of their own play, which unfolds independently although not completely unbeknownst to us. After all have we not inflicted on them our own entanglement in the totality of work, life, art and love, production and spectatorship, our hope for small revolutions of personal experiences and new technologies? The choice of plaster – a material associated with neither cutting edge technological developments nor nobility and historicity – suggests a copy or a prototype, disposable, temporary, implicitly faulty, unable to produce or manipulate desires. If contemporary sculpture is anything to judge by, today we feel less threatened by industrially produced objects and the circulation of commodities. In an affective economy we do not have to resist objects anymore but rather face their reproach.