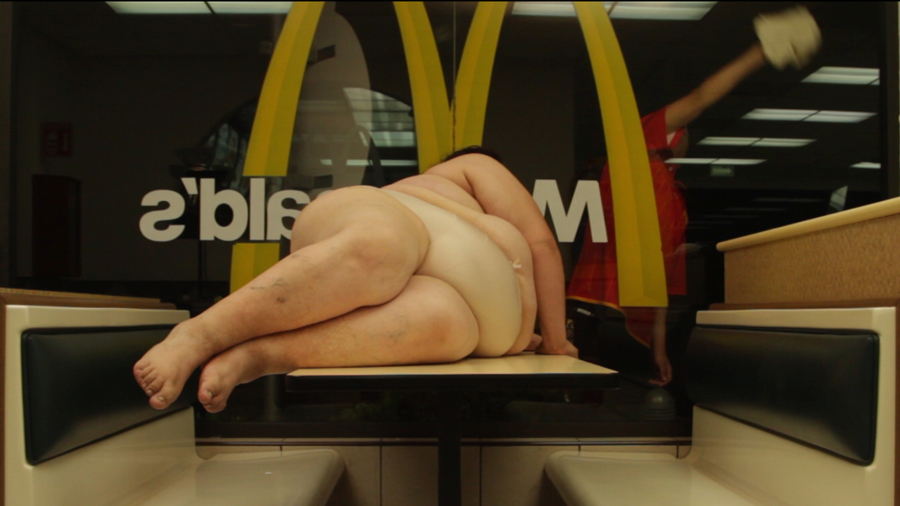 The Use of the ‘Other Body’ in Contemporary Art

The use of the “other body” in art is nothing new: the presence of an Yves Klein video showing the artist directing his extras, which opens the show curated by Raphaël Gygax, is there to remind us of as much. Fifty years later, the exposure of naked bodies does not cause as much trouble, but plenty of other issues have nevertheless come to the fore in the meantime: “Extra Bodies” appears in a way like an exploration of the development of relations between artists and “extras”.

From works by Vanessa Beecroft with their nude models in dehumanized poses to L.A Raeven’s piece which shows the period of waiting prior to an audition which never takes place (Test Room, 2000), by way of Santiago Sierra’s work mistreating extras, bodies are the object of nothing less than a complete focus, reverting us to our voyeuristic/passive dimension. With Christophe Büchel (the cover of the Sex Pistols’ No Future by a group of old ladies in No Future, 2008) and Yoshua Okòn (who films an obese body in Freedom Fries, 2014), any erotic dimension is thrown out in favour of a virulent criticism of bodily standards, while with Clegg & Guttman, the focus is on identification between academicism and representation of power. With Margolles (Mesas y dos bancos, 2013), the other’s body is henceforth signified by an ellipsis which literally makes it disappear (it is in the form of a concrete piece of furniture that has incorporated the blood of victims of scores being settled between narco-traffickers that the bodies “appear”). Making reference to Foucault’s philosophy, the exhibition tries do the rounds of the genre’s influential developments, while at the same time, and somewhat oddly, bewaring of venturing into the arena of relational aesthetics and performance. The living picture form, symbolic of the spirit of the 19th century and very present at the beginning of the show, gradually disappears, replaced by highlighting the progressive inclusion of extras in the production of works (Guy Ben-Ner), while, in tandem, the relation to the body becomes more metaphorical (Stephen Willats). It is on the second floor that this objectivization of the other’s body is turned into a critique of the mechanisms behind image-making, thus marking the recent sudden appearance of the figure of the migrant in the field of collective representation: Jonas Staal targets the process of democratic designation through the construction of an alternative parliament project in Rojava, an autonomous province in northern Syria (New World Summit—Rojava 2015-2017); Guy Ben-Ner wants to open the eyes of (Palestinian) extras by showing them the ins and outs of film editing (Escape Artists, 2016); as far as Artur Żmijewski is concerned, his shock “documentary” about the Calais and Grande-Synthe camps (Glimpse, 2017) shows migrants being put to work in an authoritarian manner, some of them painted white in an attempt to simplify the “integration” of these “foreign bodies”, putting us in a position of reception that is nothing if not disconcerting. A way of signifying that these “extra bodies”, “mobile, flexible and ready for sacrifice”, literally occupy the forefront by shuffling the cards of representation, and that it is from now on no longer permitted for artists to regard them in a removed way…