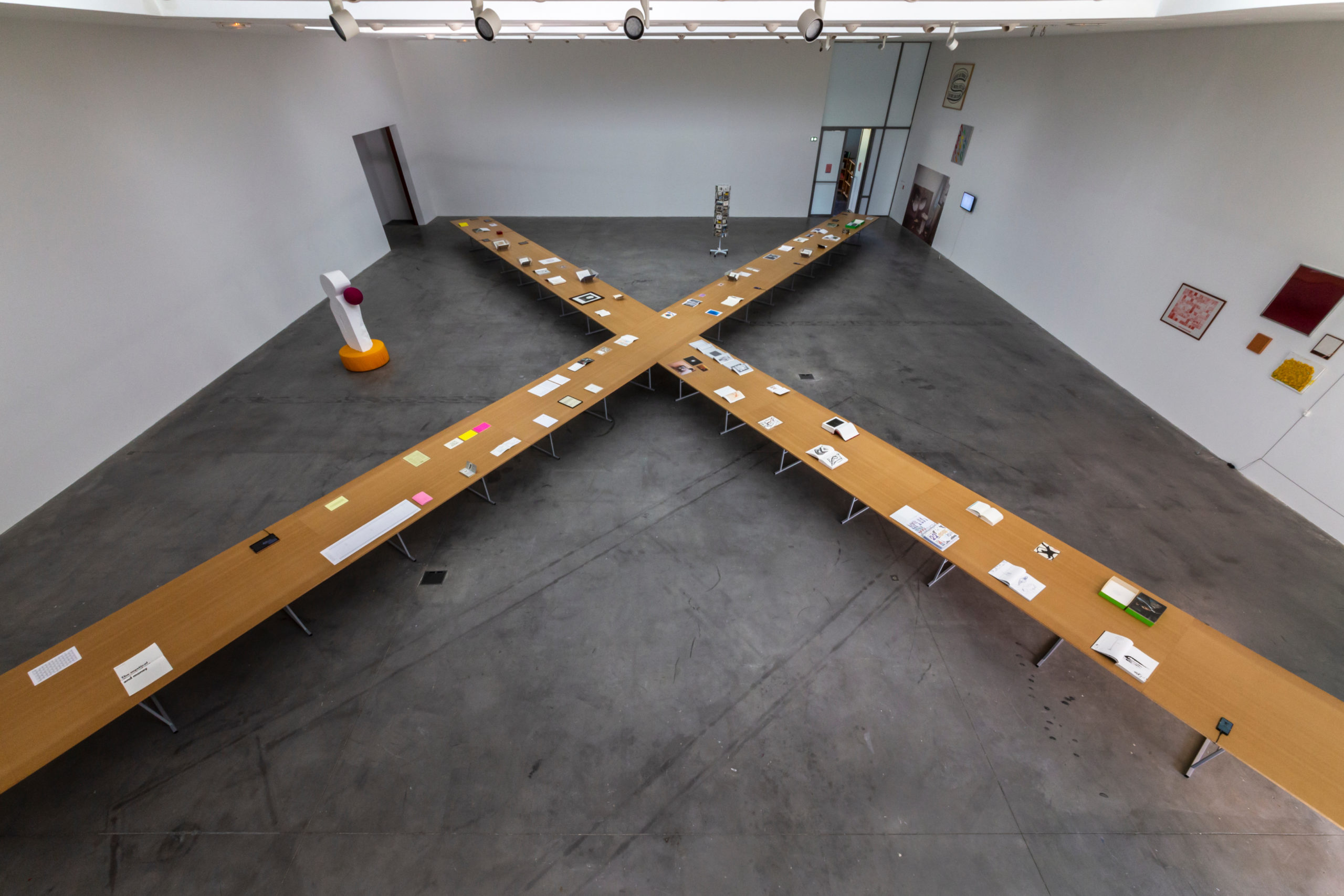 Born in 1963, Claude Closky lives in Paris. In 1982 he attended the École nationale supérieure des arts décoratifs (ENSAD). A year later he left the school and co-founded Les Frères Ripoulin, a collective including among others Pierre Huyghe (then going by the name of Piro Kao) and Nina Childress. The collective became involved in street art activities, producing collective graffiti and organizing various events. Thereafter Claude Closky developed his own personal art practice. His work included accumulations and classifications which he developed ad absurdum. For example he published a book in 1989 entitled: The first thousand numbers classified in alphabetical order. Claude Closky has always been wary of the production of objects, as well as spectacular effects. This attitude led him to experiment on the Internet. He often played with media codes and conventions in order to deconstruct them. In October 2005 he won the Marcel Duchamp prize. In 2008 his so-called “retrospective” held at the MAC VAL took the form of a huge sound installation.

You decided to exhibit just one of your works among a selection of pieces by other artists. You are barely represented in the exhibition, yet you remain ubiquitous in the choice of the works and in the scenography. How did you come to this decision to stand back?

Conceiving an exhibition is a way to communicate with the public by constructing a language in order to connect the works with one another. I preferred this dialogue between the different artworks from the FRAC collections and elsewhere to one with my own pieces. Of course, the choice of the works, the subject matters raised, the questioning of the spectacular and of the seductive, the refusal of skill and elaborate means, all echo my own practice.

As it often happens when an artist is invited to develop a show, “producing an exhibition” seems to amount to “producing a work”. Do you think that you have created a work here?

The object of the exhibition is not to produce a meta oeuvre, but to emphasize the implicit value of each of the pieces shown within a network of associations and contrasts. I feel I have the same freedom here as when I do my own work.

The exhibition is characterized by a certain temporal rhythm: most of the works change on a daily basis, whereas others are repeated continuously. Is the show unique each and every day?

The presentation of the works is based on their temporality, the idea behind the exhibition is to bring this aspect to light. The specific and consecutive elements of a series, or the different parts of a work, are shown individually, daily, weekly, monthly, and so on. Kawara’s postcards are exhibited one after the other on the anniversary of the day when they were originally sent. A Week At A Glance, by Micah Lexier, changes every week; the brush imprints of Niele Toroni’s Calendar and the silkscreen prints of Delphine Coindet’s Anarchist Calendar change every month; Lefevre Jean Claude’s diary published in the magazine Art Présence follows that of the exhibition 25 years later, etc. Displaying each element in turn will emphasize the duration of the working time. In this way of exhibiting, each part equals the whole. This arrangement is designed to clarify that the works unfold according to time, rather than according to the space they occupy. It aims at focusing the attention as much on the moment experienced, as on their coming into sight.

What place does uniqueness have in your practice?

The uniqueness or original character of the pieces has been contested in this project. Some of the works are reproductions in a catalogue. I am advocating in this way the right to curatorial freedom, to flexibility in exhibition choices and to the desacralization of objects. Furthermore, it is the act of making, and sometimes “remaking”, that I want to show. I want to draw attention to the time spent in producing what we are looking at, not to its commercial value.

Would you explain to me the importance that you attach to the dimension of time in your practice, and in this show, in particular? And, more generally, what is your relation to time?

The passage of time underlies my work, and is often its object. At the FRAC des Pays de la Loire, the exhibition project relies on looking at the works from the angle of their specific temporalities. The two coloring books, Sun/Screen, for when the screen light replaces sun light by Penelope Umbrico, and No Drones by Louse Lawler, are shown colored, a page at a time. Collection to Find My Best Signature by Annette Message is shown one page after the other. The neon Claude, Mazda, Philips by Véronique Joumard is turned off and on alternately.

It is said that it’s the “enunciation” that defines your work, rather than the end product. Would you tell me a little more about your relation to language? Do you identify yourself with the spirit of post-structuralism?

I observe the relation between objects, between gestures, and between uses. The images, in the way I sample or make them, can be read as signs. They function like words, and yet they do not have to be translated by words. However, their meaning is not fixed. The works evolve as time goes on; they are enriched according to the context and the moment.

It would seem that you back away from doing anything spectacular. As in the FRAC show, you held in 2008 a so-called “retrospective” exhibition at the MAC VAL where you stayed in the background having darkened the exhibition space in order to turn it into a large sound installation. It seems that this refusal of the spectacular lies at the root of your artistic practice.

The spectacular is the expression of an event in the making, of movement; whereas, paradoxically, the intended goal is shock, a petrified viewer, fascination, and exaggeration. I do not think it is possible nor desirable to freeze the interpretation of a work. An exhibition is a shifting operation, an open proposal. Julie Béna’s Monuments and Elsa Werth’s Temporary Perspectives remind us of this.

The FRAC exhibition requires a certain expertise on the part of the viewer, or at least a certain attentiveness. What is your intention with regard to the viewer?

Demanding persistent attention in the flow of information saturating us is not the solution. The viewer’s eye must remain free, it is not up to us to direct it. Works brought together in the exhibition appear like notifications on our smartphones; others can be consulted at greater length, or not. Words displayed on the FRAC facade by LAb[au], slogan paintings by Ernest T. and by Camilla Oliveira Fairclough, Actions-peu [Action-few] by Boris Achour, Instagram feeds by Patrick Raynaud and by Mrzyk & Moriceau, Heidi Wood’s oracles, Dora Garcia’s prediction, Dector & Dupuy’s notations, also those of Sophie Calle, of Hans Peter Feldmann, Martine Aballéa’s menus and Eric Poitevin’s photographs of empty plates…

This show seems to be doomed to a state of endless incompleteness insofar as everything is moving and being transformed throughout the time allotted to it.

Isn’t any exhibition necessarily unfinished whether it is evolving or not, insofar as it will always give rise to new interpretations for each viewer at a given moment? Look at the wallpapers of Ana Jotta or Annette Kelm; listen to the acoustic installations of Hanne Lippard or Kristin Oppenheim.

It seems that the images, texts, numbers and sounds are all put on the same level. Is that correct? What is your motivation behind putting all of these elements on an equal footing?

They are different languages. They make communication possible and they influence the nature of the exchanges. It is the co-existence of these different sign systems that interests me, and which I am working with. They are not put on an equal footing, but their relationship changes over time, their hierarchies are subject to the randomness of their appearances.

The title’s function is to name an event, to make it exist. But it’s also a sort of wild card, a very open expression which permits different ideas depending on the viewpoint of a particular piece, of the FRAC institution, of the display, of the public, etc. The “X” evokes the multiplication of gestures and objects that occupy us all on a daily basis; but also our choices, like when you tick a box on a form. By producing a table which has this form filling the entire space of the exhibition gallery —an almost square surface— I’m pointing out the FRAC’s choices for its collection. With the invitation, which shows the branches of the “X” as hands of a clock, I am highlighting the time-related aspect that cannot be separated from any construction. Daily practice is the source of Pierre Lin Renié’s D’autres jours [Other days] photo series, of Silvana Reggiardo’s #atwork videos, of the photographs of Suzanne Lafont’s Quoting sixty pages of Guide to Shopping (…) page after page, of Helene Hellmich’s Dream Drawings, of Louise Bourgeois’ Insomnia Drawings, of the renewed colors in Alighiero Boetti’s monochromes, those of Allan McCollum, those of Emmanuel Pereire, those of Stilinović, of the moving of Eva Taulois’s sculpture, etc.

In conclusion: in your view, what is the role of the artist in society? Or rather, what might your own role be?

The definition of the artist in the Larousse dictionary is:

Which we may loosely translate as the following:

For my part, I observe the world in which I live; rendering an observation can be a way to take action.