Cécile B. Evans, Sprung a Leak 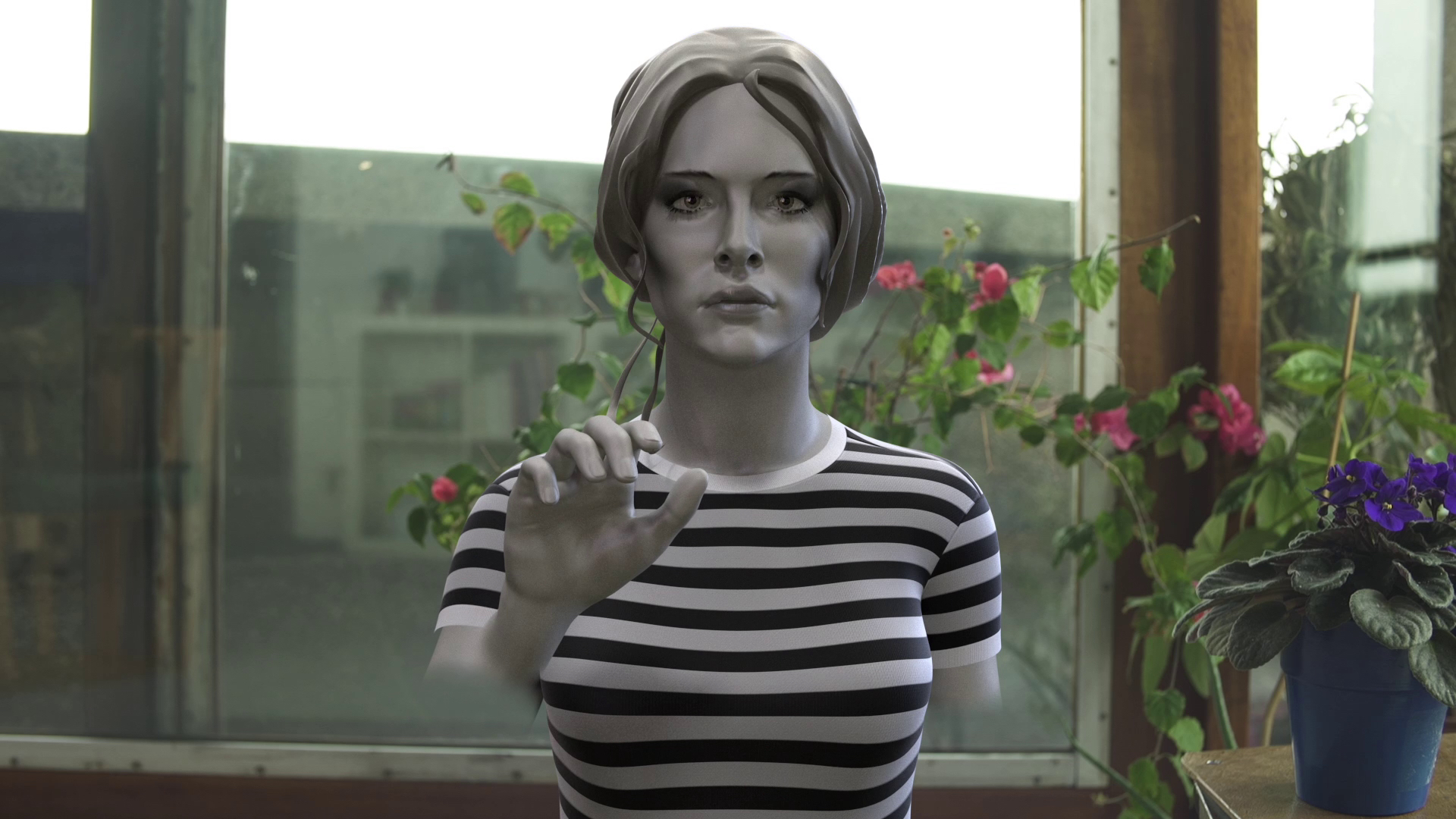 If transparency is still not topical, retention is not the order of the day, either, in a society which is leaking everywhere. Brain-drains, flights of capital, data-leaks, and so on: everything is going to the dogs. Things must flow! Ink and tears—albeit virtual. It must be said that media and social networks are making a powerful contribution to this generalized outpouring, not only of information but also, and often simultaneously, of emotion. It is invading the social space and taking precedence over reason and action, to the detriment of democracy and thought,1 with the ubiquity of the new technologies acting as a catalyst for this ready-to-feel phenomenon just a click away, which is part and parcel of an emotion factory. It would seem that, every day, we are witnessing a presentation of the daily round, caught in its perpetually watered, not to say submerged logic of theatricalization, and even dramatization.

It is not beside the point to know that Cécile B. Evans trained as an actress and that, before educating herself in the visual arts, she was also involved in the field of spectacle and games. She still pays special attention to forms of expression, representation, circulation and (over)promotion of emotion within our contemporary societies and their “apparatus”, moving in an ongoing oscillation between true and fake, real and virtual. In her work, moving images and videos have gradually given way to immersive installations, one of which, Sprung a Leak, previously shown at Tate Liverpool in 2016,2 represents her first experience involving an installation-cum-performance developed on this kind of scale. 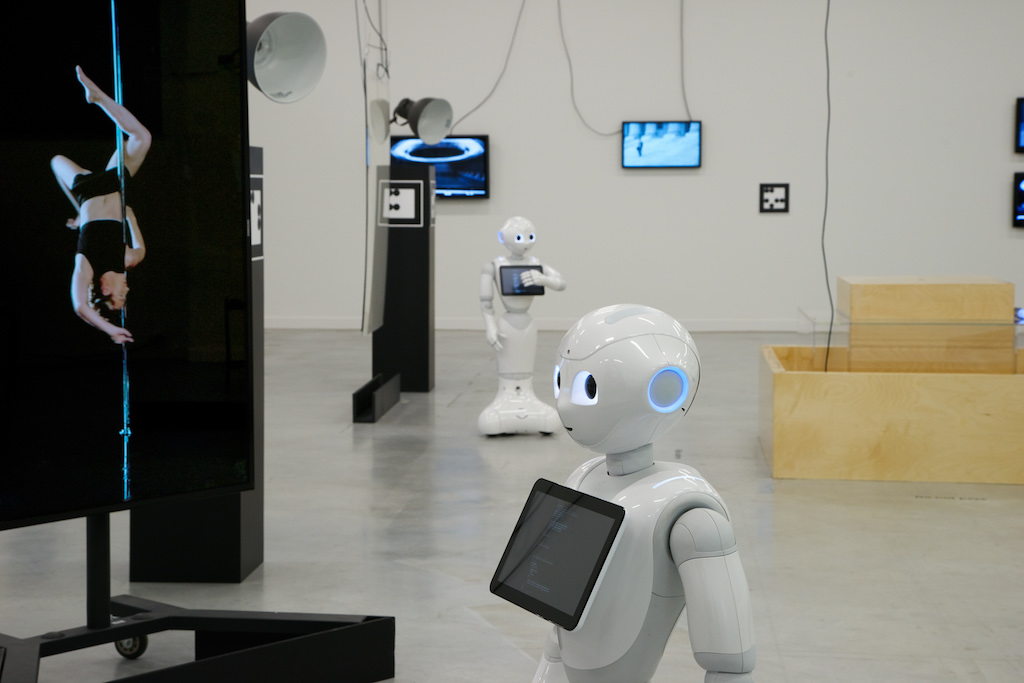 This is an automated three-act play lasting eighteen minutes,3 in which the characters “on stage” are nothing other than two “freely” moving humanoid robots (A Plot and B Plot), and a penned robot-dog (C Plot). The main additions to this, using interposed screens, are three human pole dancers (User 1, User 2 and User 3) and Liberty, a female virtual beauty blogger in peril who causes artificial hearts to skip a beat—and in particular the C Plot heart. Against a canine love story backdrop, combined with a mysterious peak and a pool party which spirals out of control, an almost uninterrupted flow of more or less violent events and information pours forth and is shown by way of images broadcast on a raft of screens scattered on the walls, giving rise to affects, bugs, black-outs and other leaks which are given material form by a fountain placed in the middle of the space, regurgitating at regular intervals. To save Liberty, robots and humans must join forces to go back in time and re-initialize the system. 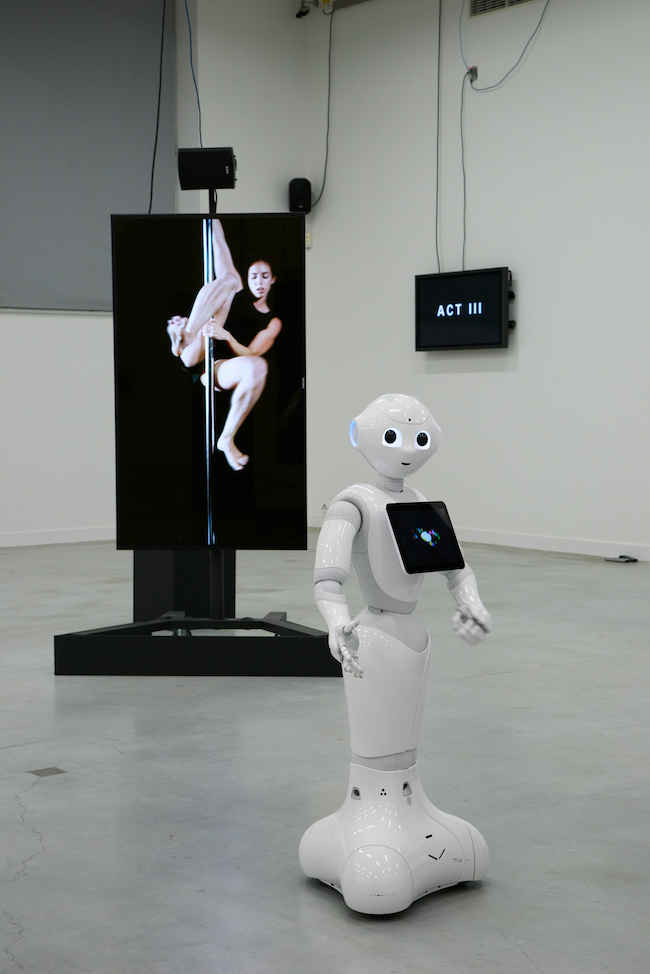 At the end of act three, Eugène Delacroix’s Liberty Leading the People (1830) appears on the screens: the static image of a revolutionary movement and a popular (e)motion. The famous picture here symbolizes a form of cybernetic revolution favouring a profoundly humanist notion, a threatened species incarnated by a digital animation depicting an armless woman—but with hands—who, in a strange mix between mutilation and graft, summons up transhumanism and, with it, the matter of performance, artificial and human alike. In this tragic-comic fiction steeped in reality underscoring the interdependence between men and machines, and their respective shortcomings and limits, Cécile B. Evans juxtaposes the two tendencies of one and the same contemporary paradox, filled with counter-addictions: extinction and profusion, lack and surplus. Whether to act or react, that is the question.

2 This is a joint production involving Tate Liverpool, M-Museum Leuven and Haus der Kunst in Munich where it will be presented in 2018.

3 If the play, in loop form, is continuously visible, a daily 90-minute “union” pause is literally used to recharge the batteries of the robot-actors. Interesting with regard to the man/machine relation and the notions of performance and digital labour.