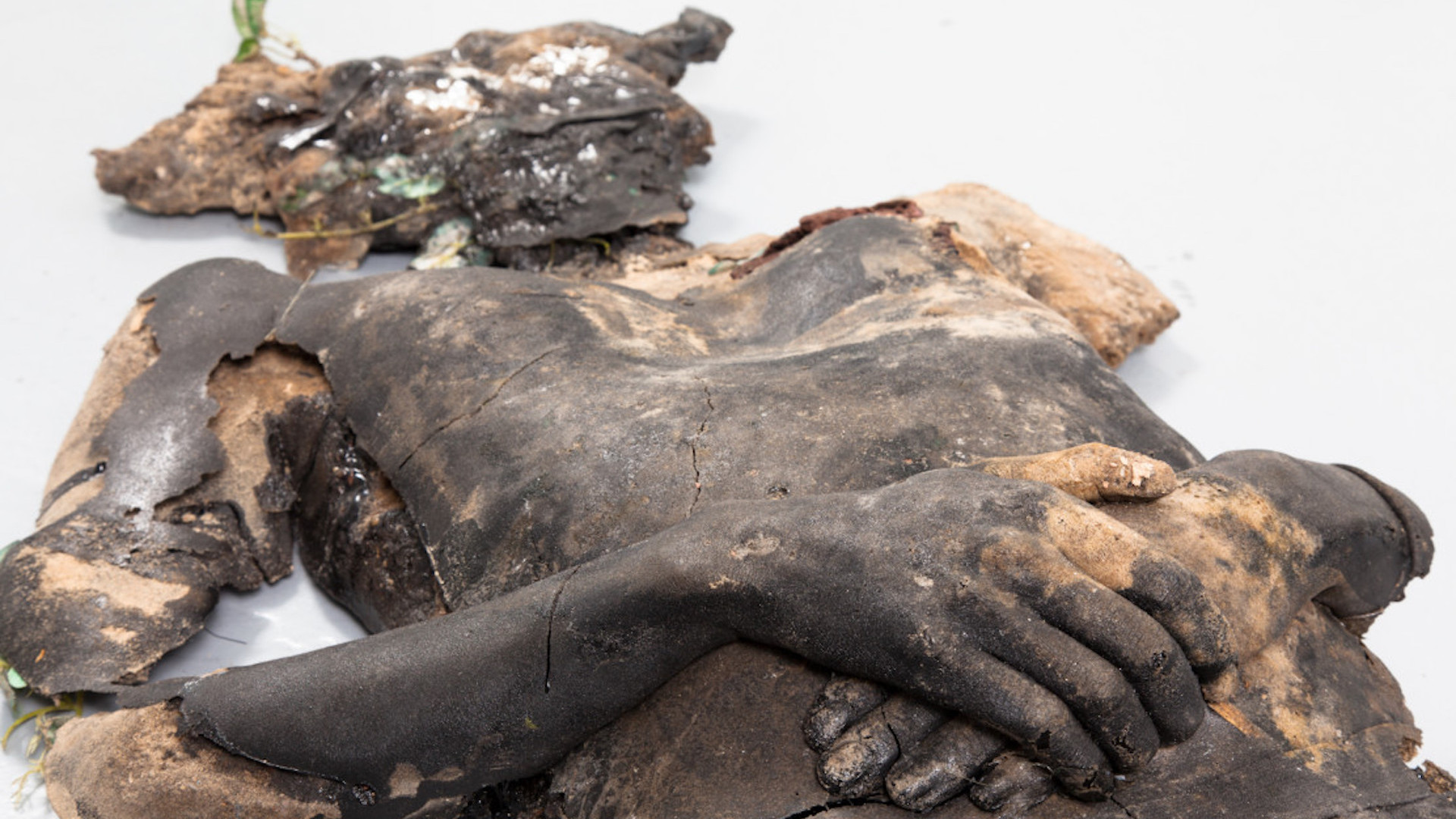 Antoine Renard questions the reality of digital utilisations and of the Internet in particular, which he connects to contemporary techno-political issues. In relying on an aesthetics based on screens, flows and signs, he is developing a work involving a scrutiny of the world in which neo-liberal capitalism, forms of degenerating psychology and biotechnologies all overlap. Since 2013, with Clémence de la Tour du Pin, he has been jointly running the Center art space in Berlin. With “Resource Operations”, he is presenting an exhibition in two parts, at the same time: one at Tlön (Nevers-F), the other at In Extenso (Clermont-Ferrand-F).

Your work is developing a particularly pessimistic world, where meaning and evocations are concerned, but also through the adoption of a relatively gloomy visual grid. You also rely on figures of psychological degeneration, and a bacterial and parasitic approach, then, in the end, you proceed by way of a relatively chaotic spatial organization. How do you perceive the dark nature of what you’re presenting? 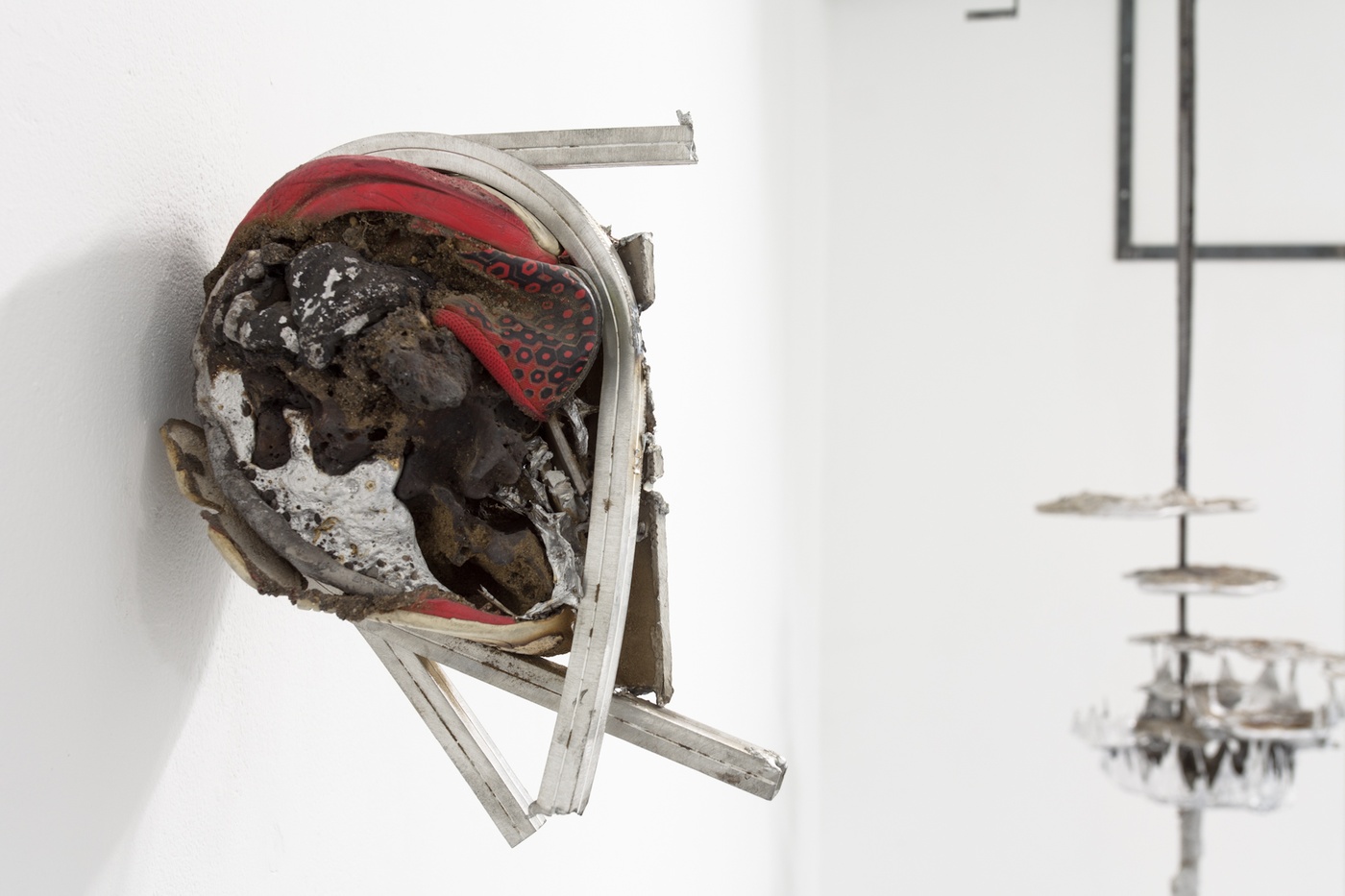 Yes, recently I’ve dealt a lot with the theme of illness and degeneration. It all began two years ago, when I came upon this book by Gerald Hüther, Biology of Fear, which deals with psychology through biology. What was involved was determining how fear functions and how we can use it constructively. The problem with fear is that it holds sway over confidence and hope; a veil comes over things and complicates any thought-out decision. I think that one of the challenges today is to “domesticate” or “tame” fear by deconstructing it bit by bit, and by learning to “appreciate” it. So we can see traces of this domestication of fear in past civilizations, based on occult practices, taking hallucinogenic plants, and trances. In all instances there is an invisible, dangerous and necessary place to visit. In 2012, I published a collection of writings by teenagers, dealing with their experience of a plant with powerful hallucinogenic effects, Datura stramonium, (Oh rats! It’s deceiving, published by Broken Dimanche Press). I wondered why all those young people were prepared to risk their lives for something that gives no pleasure: is it a form of resistance?

We can also see an approach consisting in evoking belief systems, in particular at Tlön, where you pass through a processional itinerary to reach a screen which has something hypnotic about it. This screen might be akin to an object of worship, or a new idol. The T-shirt we then come across suggests a cross, but perhaps a satanic pentagram, too. How do you understand this relation to belief, and to actual esotericism? 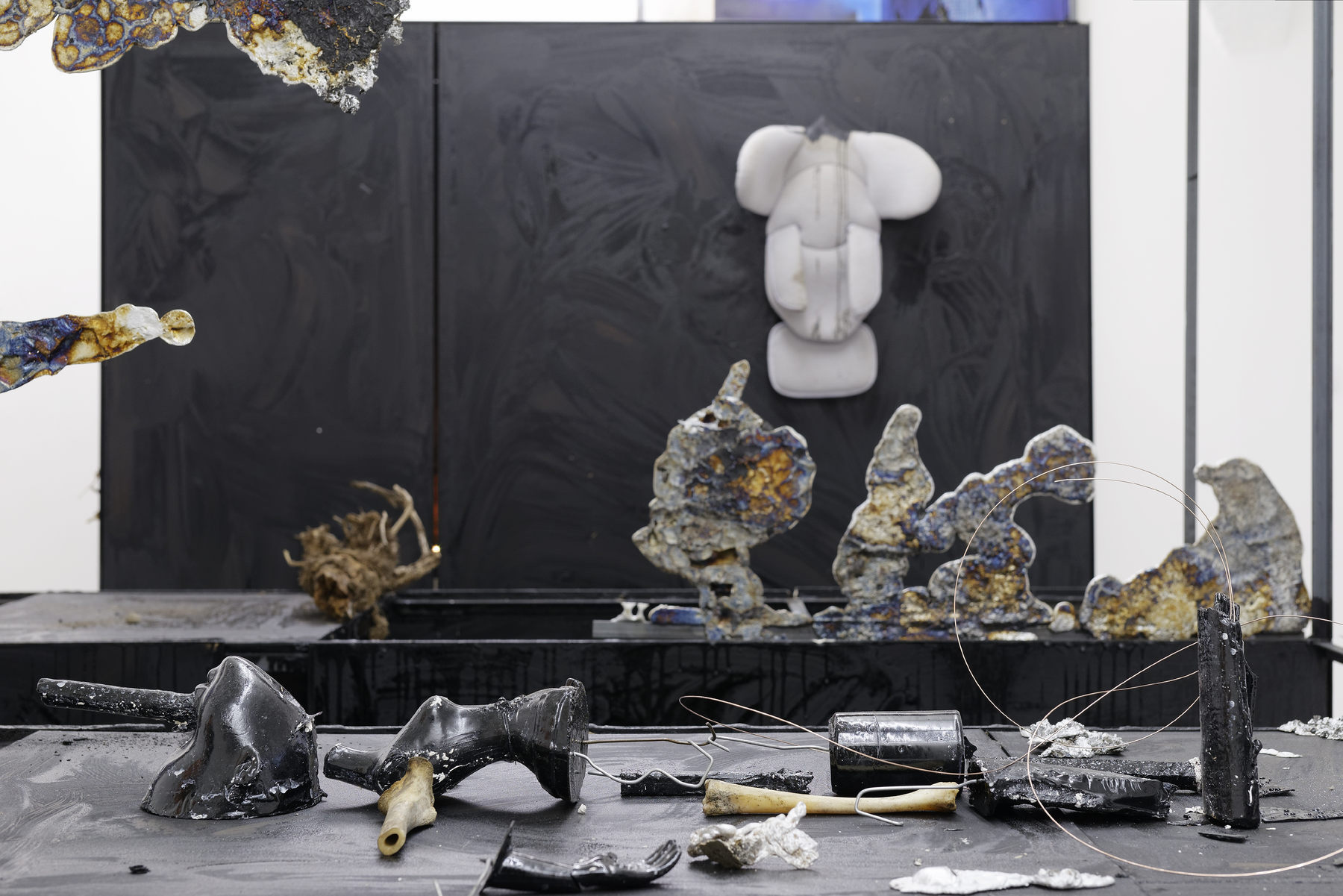 In a general way, I’m very interested in the idea of worship and cult, and by ritualized practices. Much of my research focuses on the way culture, science and politics can straddle each other and give rise to a dialogue. For me, a lot of signs suggest that we have entered a new phase of the capitalist model, perhaps even its final phase, with robotics, big data, the emergence of fake news, and the uberization of work codes. All this leads me to think that our societies are looking for new models. How are we to find our bearings amid these upheavals? In an age when all alternative discourse ends up by being taken over by the market, or running out of steam all on its own, what are the ways of thinking likely to withstand being taken over or, at the very least, how is it possible to escape unscathed from the market’s attempts to take things over? So it seems to me that belief is an extremely stout weapon, and that truth may perhaps be lurking within us, somewhere, it is enough to learn how to listen to ourselves, in our societies where everything is being done to divert the attention that we pay ourselves, where it is always a matter of generating desire, given that capitalism works by addiction, and through a sensation of not having enough. The practice of belief through meditation is the exact opposite, it involves an inner quest, and listening to yourself. It would thus seem that the way in which we consume information no longer really has any influence on the “present-day” knowledge that we may derive from it, it serves rather to generate things emotional, and pathos, which is interesting because, unlike data, the emotional cannot be enhanced as cash. It has hitherto been impossible to make money out of our emotions but, on the other hand, it is possible to use these emotions to get people to act.

You have a desire to reject a system. Yet one also gets the feeling that your critical approach is more cunning than it might first seem to be, insofar as, for example, you make compromises with technology: you seem to use it to your advantage, as if you’re saying that, in order to restrict a system, the best thing is still to encompass it. Nevertheless, if you are going beyond a “traditional” activism by proposing another kind of “criticsm”, how do you perceive your relation to technology? 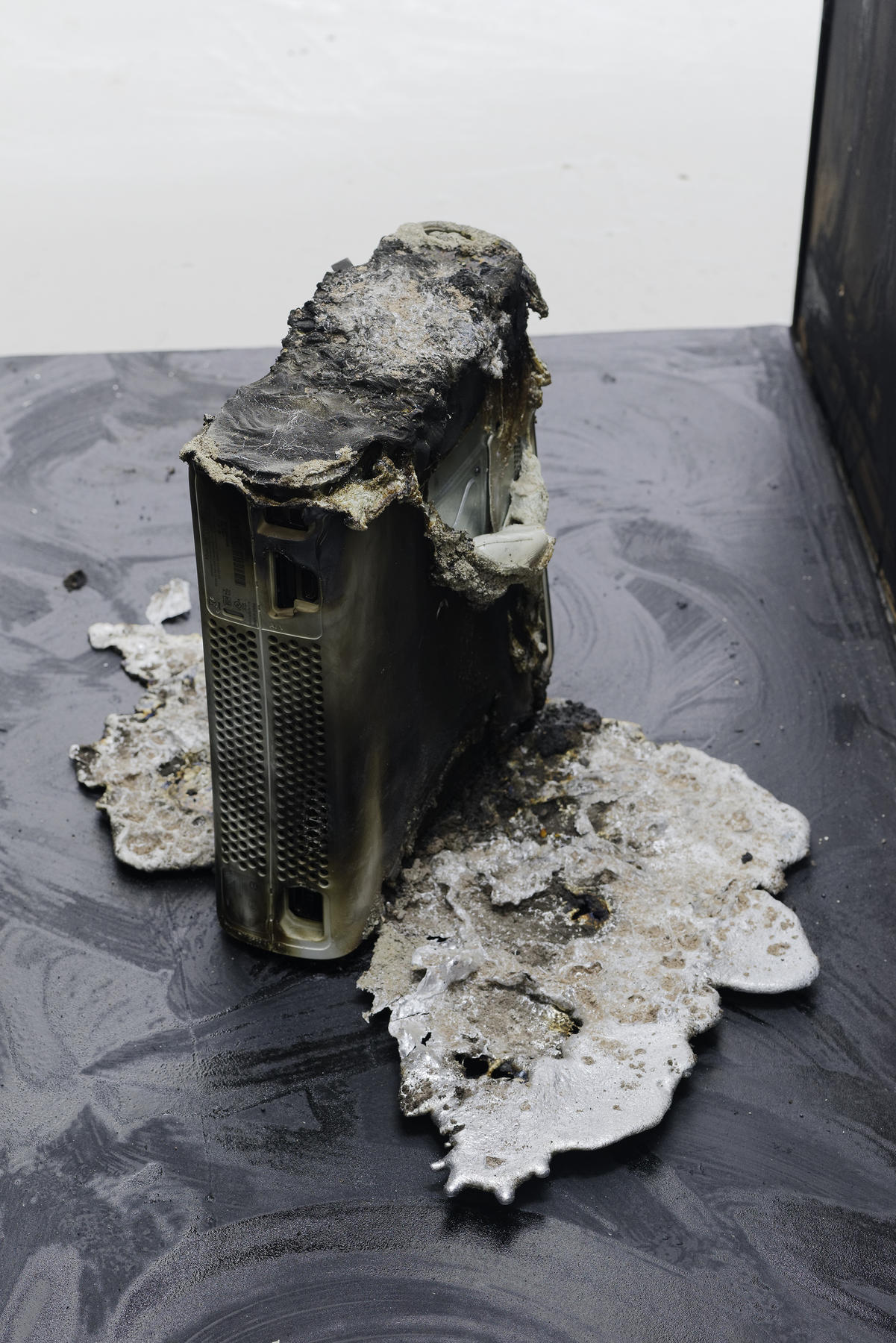 My work very often borrows from goings-on connected with the current situation. I mainly use recent news items as a conceptual matrix for my installations, whether this involves blog articles, urban myths, or geopolitical events. The source of my work lies in a contemporary space/time-frame. My references pile up like a social media news feed, the information unfurls article by article, in a seeming anarchy which ends up making sense, in the wake of certain crucial events. It’s enough to spend a bit of time on Facebook to understand certain mechanisms associated with the digital age: each article deals with extremely complex issues, by hugely simplifying them. Most of the time, people only read the titles of articles, or the first two or three lines, before putting a “like” or “share”, without checking the truthfulness of the sources; so the media focus on big titles to explain extremely complicated problems, in such a way that everyone may end up by having an opinion that is reached very quickly. Their opinion becomes a voting force; we have clearly seen these mechanisms in action with the Brexit and Trump. The more complex the world becomes, the simpler these articles become. I think that we are currently witnessing a closing of the gap between politics and entertainment. In this sense, my work reflects these mechanisms, and the apparent literalness of my arrangements and systems conceals a form of perversity: it is meant to give the visitor the feeling that he or she is in complete control of the situation, in order to better introduce him or her into more profound thought schemes, where contradiction and ambivalence rule the roost. The purpose of my work is not to criticize a system, but rather to highlight these psychological schemes, by inventing my own reality, and my own alternative history. The idea being to appropriate this technology, make it accessible and understandable for one and all, and free it from political and commercial supervision in favour of everyone’s imagination. 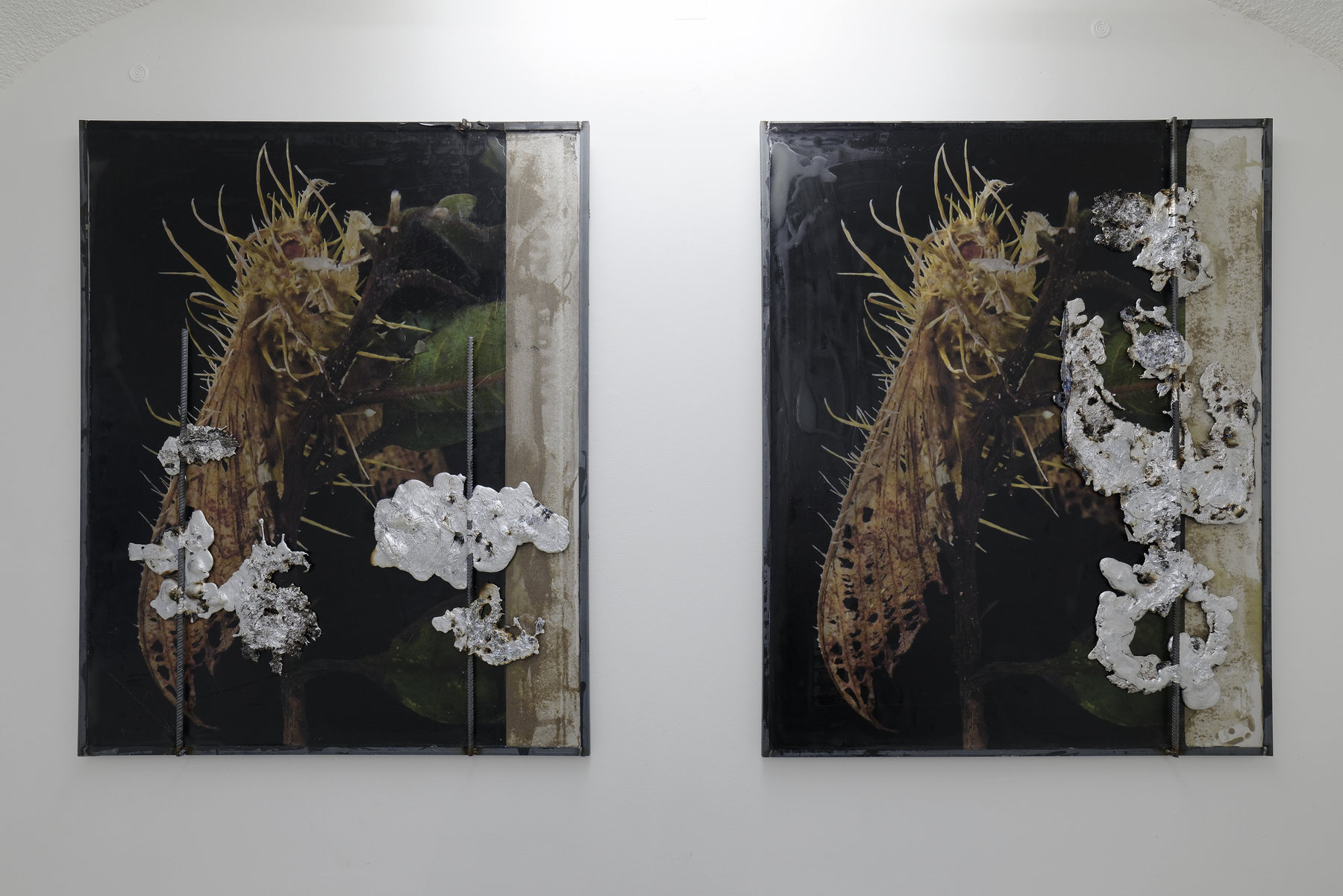 From a formal viewpoint, you’re adopting a visual semantics which expresses notions of innerness and outerness, for example when you feature grids and structures conjuring up exposed machines, or else when you’re interested in an idea of circulation. How do you see these notions in your work? Isn’t this a way of depicting the material world, compared to a world which people today are claiming is immaterial?

The challenge of the information war is above all to get information to circulate. This involves, firstly, having control of the circuits in which this information transits. Information is immaterial, but the structures which get this information to circulate are very real. There are powerful lobbies behind each algorithm which re-distributes information, and it is often very hard to go back to the source of each item of information. The very image of the Internet, with the dark web, contains a form of occultism, or an inner and outer form. If there is a dark web, there must also be a bright web. It’s a bit like being present at an epic battle of knowledge versus ignorance, lightness versus darkness, without knowing which side one or the other are on. This dimension is fascinating, it makes a radical break with the old technocratic and liberal structures of the past 20 or 30 years.

In other respects, can you go back over the relation between bio and technological as it comes across in your work? Especially with regard to the argument to do with man’s assimilation of technology, in order to prolong forms of existence? 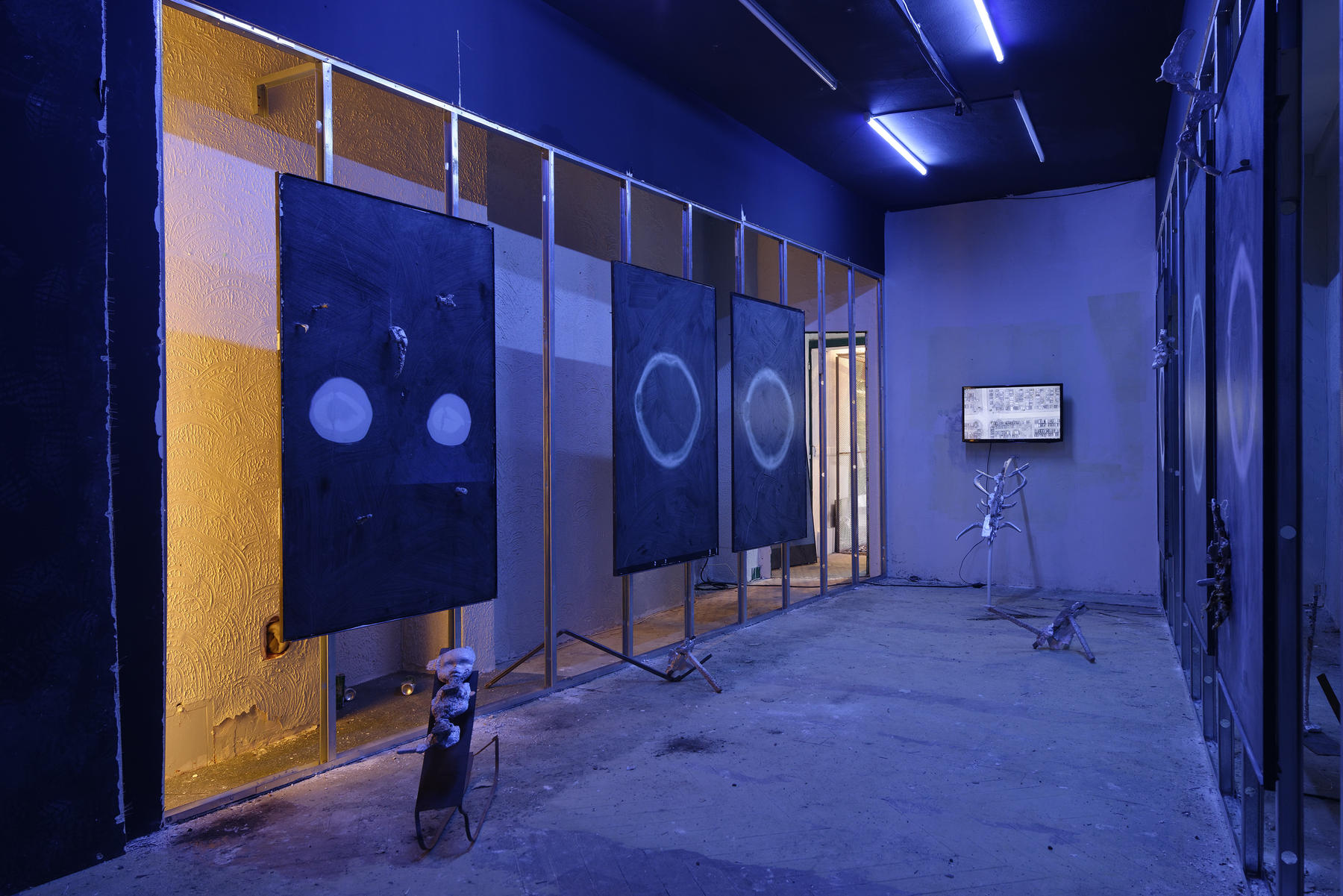 I sometimes wonder who is assimilating whom. Is it man assimilating technology, or vice versa? I don’t have the answer to this question, and I’m suspicious of the arguments associated with transhumanism, because they go hand in hand with accelerationist concepts and the illusion that technology will necessarily “illuminate” man, which, for the time being, is far from being the case. We’re even witnessing the exact opposite.