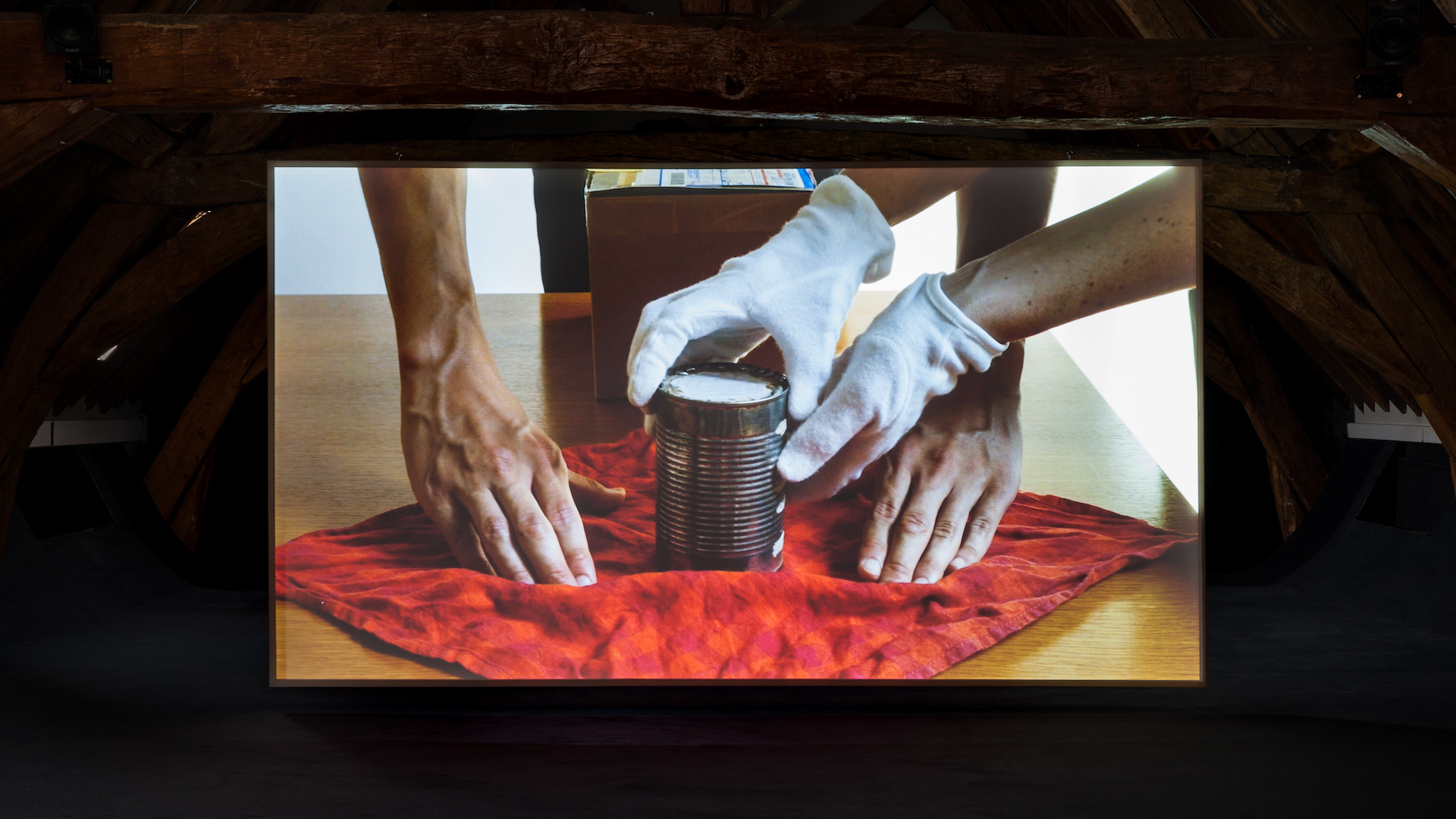 “It is in the sacred that we are at once most ourselves and most outside ourselves. Because we thus put ourselves on the level of totality. Unusual spectacles that amaze us, disorient us, and transport us, and in front of which, nevertheless, we recognize ourselves more than ever”.1

At the M Museum in Leuven,2 Béatrice Balcou’s works are on display in a single room, after passing through the Borman show, that dynasty of 16th century sculptors, which is somewhat surprising for contemporary art lovers. The outdated confines of the exhibition of late Gothic statuary contrast with the spareness of a hanging garden, a timeless capsule devoid of artifices and offered for silent contemplation. As the opposite of a form of transcendental sacredness where aspects of reality are reproduced to exacerbate man’s reliance on a higher principle, Balcou’s sacredness exists per se.

Wide open to the exterior, and haloed in light, the exhibition room is lined with large bay windows, offering a unique viewpoint over the nearby roofs. As soon as you walk into this room, the view towards the heights of the Belgian city draws your gaze towards a work made of transparent glass in which there appears, both near and far, an upside-down image of the Flemish city. This is the first time that Balcou is exhibiting the artist’s work which has inspired the “placebo” beside it. A “placebo” here is a wooden replica of a work by another artist which Balcou makes use of as a medium of rehearsal ahead of the Céremonies sans titre [Untitled Rituals], during which she manipulates the original work, inviting viewers to let their eye dwell on and contemplate it at greater length. In all modesty, the work is here disassembled, bowing out to its predecessor. The eye cast upon the twosome—the original and the “placebo”—, immediately sets up the conditions for our visit. Through the work of Ann Veronica Janssens, Balcou invites a change of paradigm, and emphasizes the reconfiguration of the world challenged by her unusual approach to art, where the impermanence of matter reigns. The glass ball, not made by her, concentrates a scaled-down world, a discreet echo, too, of Genpei Akasegawa’s Canned Universe (1964), highlighted in the work of Yuki Okumura, which Béatrice Balcou manipulates in the video Tôzai on view a little further on.3 This “floating world” (words calling to mind the style developed in the Edo period, associated with entertainment and prosperity), which is nevertheless dislocated in its wooden remake, is the signal of a warning against the hasty consideration of a work of art which has neither the form nor the status that is imposed upon it. Here the artist demonstrates not only the freedom she still has over the formula of her “placebo”, which can be applied without systematism, and is undergoing profound changes, like the world roundabout, but she also shows the infinitely autonomous character of her sculpture which she asserts no longer as a tool but rather as a fully-fledged work, upsetting the traditional conception of a unique and original work, and any attempt to make comparisons with Janssens’s œuvre. Henceforth, the translucent fragility of the glass no longer contrasts with the opaqueness of the wood4, whose delicate treatment, akin to that of Quatre épingles pour R. Heyvaert, upsets the idea of the presupposed density of the material.

These barely perceptible and finely sculpted four pins form the last of Balcou’s Pièces assistantes [Assistant Sculptures], endowing themselves with the function of supporting the work of René Hayvaert—an artist and architect, born in 1929, who died in 1984 in Ghent, and for whom the M Museum held a retrospective in 2018. The Pièces assistantes are wooden pieces which highlight the often invisible elements used to present artworks: in an inextricable ambivalence between dependence and autonomy, absence and presence, one does not exist without the other. Here Balcou pushes the form of the assistant work to the limit—at times deemed too visible in relation to the work it is assisting5—, a solitary and supportive crutch, whose effective sobriety also denotes the wit with which the issue of the status assigned to artworks is treated. The assistant piece reveals the beauty of the void, the memory of a form whose hanging we imagine in space, as much as it questions the codes of the institution whose role has more to do with masking the kindliness of systems underpinning the appreciation of a work.

The other placebo works—arranged further on directly on the floor or on grey pedestals conjuring up tatami formats—for their part call to mind the much broader protocol developed by the artist for the conception of the Cérémonies Sans Titre. From their procedures to their production, the “ceremonies” highlight a shared responsibility and subjectivity linked to the eye cast on the work. During the 2019 Playground Festival,6 the slow hypnotic session including Susan Collis’s She Falls Down,7 crimped with precious but barely perceptible materials, duplicated this issue of the value that we grant or do not grant to a work, thus also underscoring the seduction at play between viewer and work.

In the same way, the micro-scale choreography of gestures presented in Tôzai (2018), the artist’s first video ceremony, urges us to take our time. Performed in collaboration with Takuya Wakayama, a tea school student, the video presents a set of tin cans emptied of their contents, whose labels are then placed and sealed inside them, in accordance with the procedure used by Genpei Akasegawa8, which this work derives from. The delicate assurance of the gesture manipulating them treats in equal measure each object, whose diversity of packaging as artworks (ranging from painstaking and rigorous wrapping with bubble-wrap to simple cotton fabric) defies their resemblance.

Running counter to the secret principle of the Cérémonies Sans Titre, kept at some remove from all photographic documentation, Balcou comes up with a detailed, and exposed, approach to the works, which are no less devoid of solemnity. Here, she removes the limited exclusive and time-related relation of the methodical packing sessions of the Cérémonies Sans Titre, whose presentations take place within a defined framework for a small group of people. She immortalizes the ritual in the mechanical repetition of the animated image and involves a demystification of the aura reigning around the “ceremonies”9, by abolishing the mystery at the heart of the protocol. The manipulation, visible here through the moving image, finally emphasizes the notion of perception, unfurling an unusual spectacle and a sacred dimension of the day-to-day by way of the triviality of the object, where the time-frame of the performance capsizes. Tôzai takes the moving body back into the exhibition space, just the way that Transformer (2018) summons the visitor to no longer wait in contemplation

but to adopt discreet action, far from the spotlight.10 Inspired by Balcou’s research to do with the bunraku—Japanese puppet theatre—the work incites us to reflect upon a potential group synchronization by way of the handling of the four pieces of wood making up the sculpture which, when all assembled together, form a body. Setting the whole thing in motion, in a poetic, flawed and lopsided way, makes it possible to create a distance and develop a critical dimension of the theatrical form, as well as a questioning about group work and the hierarchy it involves, or not. Here, Balcou summons a challenge to the fixed structure of the bunraku tradition, where she hijacks artificialization and codifications, making way for the possibility of the “sidestep”, and the gap.

The presentation of Balcou’s work at the M Museum weaves the lines of force from one work to the next within a space that thwarts solids and voids, removed from any retrospective ambition. As in the bunraku, there is “no thread, therefore no more metaphor, nor Destiny; because the puppet no longer imitates the creature, human is no longer a puppet in the hands of a deity, the within no longer controls the without.”11 The reversal referred to in the introduction is total, and the notion of sacredness is upturned. Rid of all human-transcendance binariness, the artist’s proposal in Leuven manhandles the very term: ex-hibition, like a presentation “outside” or self-facing, rather offering a zen and symbiotic meeting of the mind, body and inner world, from which emanate an intimacy and a sacredness to do with everyday experience.

2 The exhibition is a kind of sequel to “L’économie des apostrophes” presented from 11.11.2018 to 10.02.2019 at La Ferme du Buisson in Noisiel. Its presentation in Belgium, where Béatrice Balcou lives and works, is made possible thanks to the support of the ADAGP’s Connexion grant.

3 Tôzai is a video produced during Béatrice Balcou’s residency at the Villa Kujoyama in Kyoto in 2018. She worked on it there in collaboration with Yuki Okumura, a Japanese artist she met in Brussels, with whom she has been working for several years. Yuki Okumura is the author of Canned Multiverse (2012), manipulated in Tôzai, made based on the work of Genpei Akasegawa – see footnote 8.

4 The non-haphazard appearance of this material calls to mind the artist’s current research, having been invited in 2019 to the CIRVA, Centre international de recherche sur le verre et les arts plastiques, in Marseille.

5 As was the case for Quatre cales pour D de Tscharner (2017) during its presentation at the Galerie Levy Delval. By common agreement, David de Tscharner and Béatrice Balcou decided to exhibit the assisted work and the assisting work separately.

6 The Playground Festival is a platform which annually, every November, presents a selection of artists whose work is situated at the crossroads between visual arts and performance. The festival is jointly produced by M Museum and STUK, House for Dance, Image and Sound, in Leuven.

7 The Cérémonie Sans Titre #10 that makes use of the work of Susan Collis as well as its placebo was acquired in 2017 by the CNAP. Since then, the three works have been travelling together whenever a ceremony takes place.

8 In 1964, Genpei Akasegawa, an avant-garde Japanese artist, created a sculptural piece titled Canned Universe (Cosmic Can) based on the following concept: open a tin of crab, eat the contents, remove the label and affix it inside, then close the tin. By reversing inside and outside, he conceptually managed to put “the world in a tin”.

10 Counter to expectations, in his book La discrétion ou l’art de disparaître, Pierre Zaoui underscores a form of action as the basic principle of a policy of discretion. Cf. p. 120.

In 2020, Béatrice Balcou will take part in the residency programme “Accélérations” organized by the Centre Pompidou in Paris. A monograph will be forthcoming from MER. Paper Kunsthalle, jointly published with La Ferme du Buisson and with the backing of the CNAP.