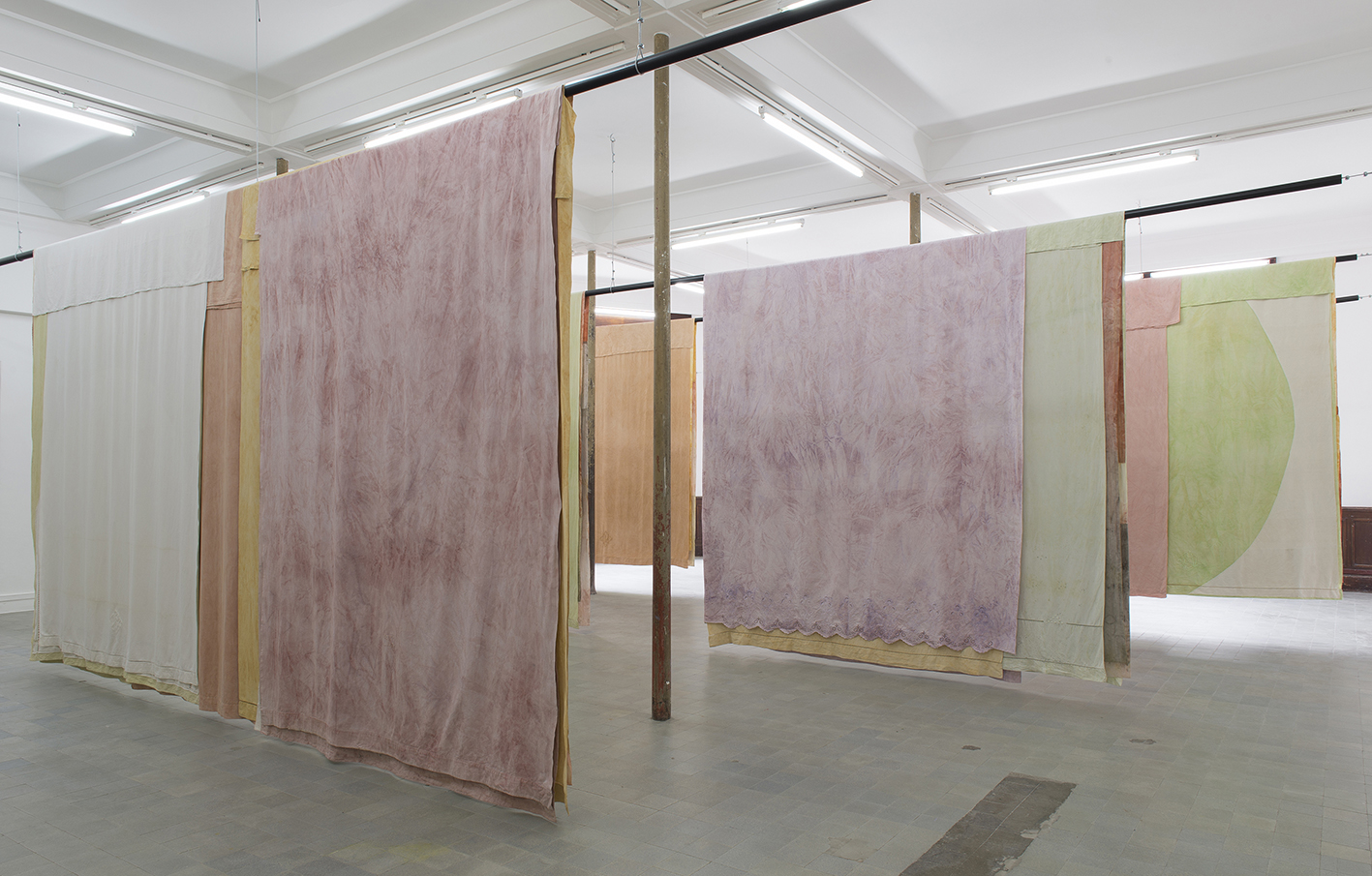 The art of Adrien Vescovi (born 1981, Thonon-les-Bains; lives and works in Marseille) is one traversed by movement, displacement, travel. Nothing is ever frozen nor definitive in his work. Everything is transformed, recycled, seems alive. For the past ten years, the artist has worked exclusively with textile as an alchemist, landscape painter, or set designer would. For his first solo exhibition in an art centre, he infuses the spaces of the Grand Café in Saint-Nazaire with a complete work: a story in textile that holds chromatic strata of intimate narratives, between tradition and magical ritual. “Soleil Blanc” (White Sun) can be considered as a unique installation in which each textile serves as a partition. True drapery paintings and textile walls transform the institution into a soft place and loose form. The artist superimposes new industrial fabrics with older cloths, the last guardians of domestic memories attested by the presence of embroidered monograms. They form several layers that resemble the pages of a gigantic book activated by the passage of visitors’ bodies as if they wanted to turn the pages.

Nourished by previous shows, the proposal in Saint-Nazaire is the accumulation of developments and experiments begun by the artist in 2020. “Soleil blanc” is simultaneously a story, a series of works and an ensemble taking on various forms, evolving from one exhibition to another. It is the white sheet that covers, envelops; the compilation that articulates the space; the commitment of the artist; his profession of faith; the memory of light that reverberates against snow. Between 2015 and 2017, the artist set up his studio in that of his grandfather’s in Getz, close to Morzine in the Haute-Savoie region of France at an altitude of almost 6,000 meters high, where the UV indices that attack skin and textiles are very powerful, like accelerators. The dying of the fabric thus took on an almost protocol process. Vescovi infuses his pieces, soaking them in a concoction of waste water. A dozen canvases follow one another in the same basin, so much so that as they pass through, they end up feeding themselves. In the studio, the fabrics are saturated with history. Once wrung out, they leave a “liquid landscape” in the container, replenished in the residues of the vegetable waste which fed them every wash. No varnish covers his pieces. The refusal to freeze is of a political nature and if the fabric loses information, it also takes on new ones. Adrien Vescovi’s work is about both recording and the transformation of paint. Traces of the moon, earth, and sun are printed in the textile in the same way as the vegetable pigments which were used to dye it. It becomes a memory through ingestion, preserving a little of everything that it encounters. In the same way, the old fabrics with hand-embroidered monograms are at once strata of territories and intimate and collective histories.

In Milly-la-Forêt in 2017, the same place where Jean Tinguely built his Cyclop, Vescovi developed an archive as a way to question paint by letter nature take its course. The action of time– that both passes and is created– transforms his canvases. That artist invites chance and randomness to his creations.

He later settled in Marseille which is where the notion of movement appeared in his work. Four lanes of traffic that made the textiles move led to a consideration of the visitor’s bodily movement as an active principle in his work. Vescovi thinks then in terms of spatial and corporal choreography which involves an arrangement of space, as well as the displacement of the spectator, leading him to work a grid as motif. It was in the Phocaean city where Vescovi developed his Roussillon chromatic circle from mineral dyes. He wanders in his studio observing what he does. At the Beaux-Arts in Annecy, where he studied, he had already begun questioning memory. The cotton canvas imposed itself in 2012 at the sight of a Parisian store under construction covered with protective fabrics– the artist tells of a true encounter with the textile. These fabrics retained traces from the construction, the passing cars and daily life. It was thus a relationship between memory and surface that he explored in his early works. Accustomed to living in rectilinear cities by the water, he spent ten years in Paris, moving his studio from north to south, cycling around the city. These years of experimentation were strongly marked by travel, notably by train between the Haute-Savoie and Paris: seven hours on the train watching the landscapes go by, before (often) walking back to the studio from the station, continuing the journey in movement.

Between 2012 and 2015, he redefined temporality by surveying space, hiding, revealing, and gliding. The artist has always lived in very thought-out places, where everything has its place but can still be moved. This apprehension of space, which he has been experimenting with since his childhood, is witnessed in a series of pieces simply placed on the floor of the Grand Café. Here, he reproduced the system of the studio in which he works textiles directly on the floor before suspending them.

After a number of projects in 2019, the following year marked by the pandemic was also a year of repose during which he focused on his painting– particularly during the first lockdown when he developed a rounded shape, a ring similar to the Möbius loop. The artist was struck by the work of German sculptor Franz Erhard Walther that he discovered at the MAMCO in Geneva, for whom language, memory and history was of fundamental importance. The relationship to textiles is embodied in the sheets that belonged to a trousseau of collective memory. The artist retouches and reassembles the fabrics. In the continuation of the ensemble exposed in the adjacent room, paintings present geometrical forms which evoke letters. Here, we are in a visual language. His book paintings are conceived as layers.

Vescovi desires to incorporate the landscape into the textile. The glare, the reaction of the sun on the snow, provokes a displacement, an introspection. The domestic and intimate side of the old sheets– “his unknown soldiers” as he calls them– brings us back to the human scale. The monograms withhold a temporality, a past time, an archaeology, a bursting.

Gaston Bachelard questions time in Intuition of the Instant. What is a moment? For him, truth is above all a story, a different perception according to the times. What is today will probably not be tomorrow. Adrien Vescovi maintains multiple relationships with matter, colours and forms that define his work. A stunning walk in the memory of light, “Soleil Blanc” plays with the movement of the visitor and engages his or her body. The artist’s work also considers the transformation of paint, treating its surface– especially through dyeing– and its material. Vescovi composes landscapes from natural dyes, from something that has infused the fibre of the textile. In his works where everything seems to interpenetrate, as if something were hidden in the material: a setting, inhabiting a place that has already been inhabited itself.