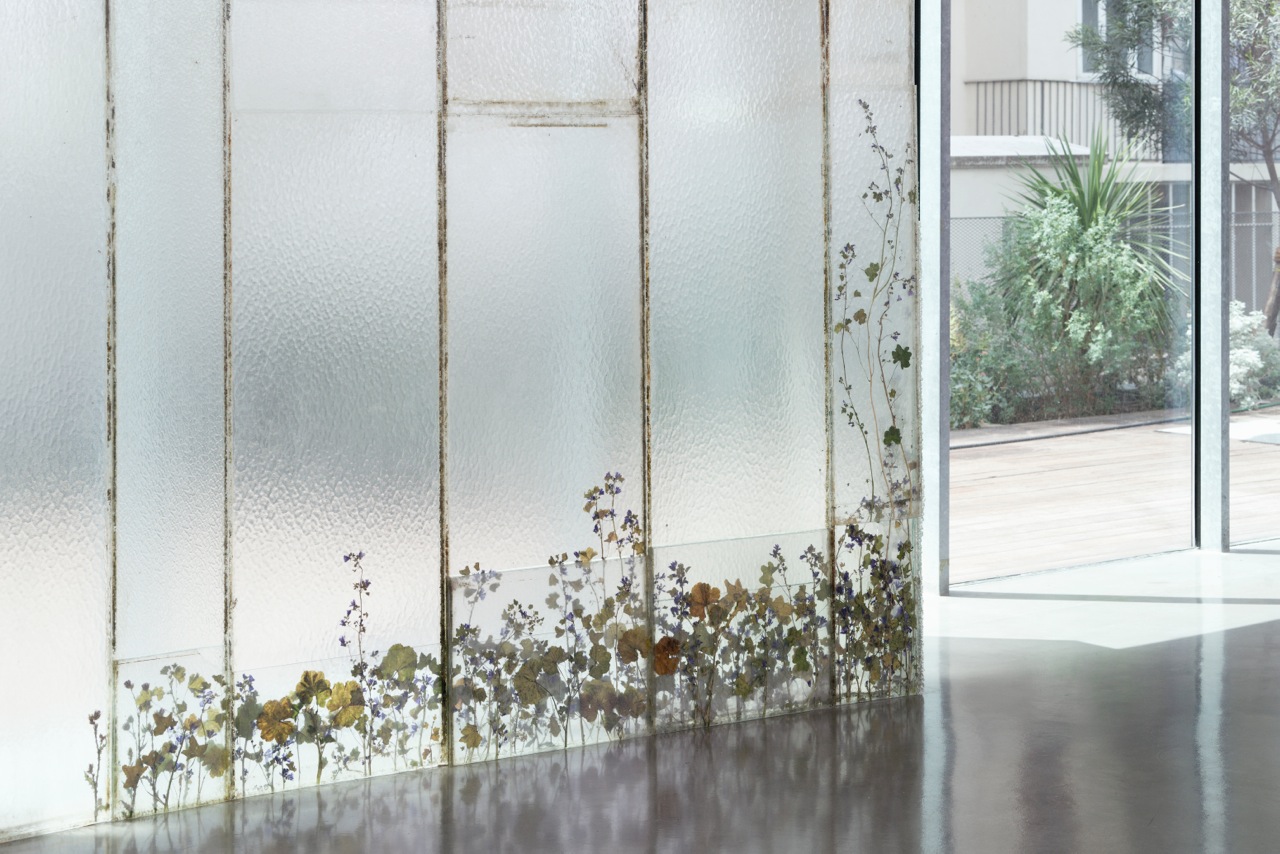 “Adelaïde” is the result of a partnership between Fræme and the Frac PACA and consists of two exhibitions by Wilfrid Almendra in Marseille which together depict the rocky landscape surrounding the rural and working classes, work itself, exchanges and encounters.  The project, which is curated by the Frac’s Muriel Enjalran, is part of Faire société (Making Society), an artistic and cultural project which also features exhibitionsby Ângela Ferreira, Ramiro Guerreiro et Apichatpong Weerasethakul. At the Friche, it figures predominantly on the rooftop terrace and was curated by Sofia Lemos.

“Adelaïde” spreads itself out over two separate spaces: the Panorama at the Friche la Belle de Mai and at the perspectives platform of the Frac. The title Wilfrid Almendra gives to his exhibition is a reference to his aunt; a familial figure who makes her living trading the objects she produces within her community in the Portuguese village of Casario; a place where she is also actively involved as a citizen. This is also where the French-Portuguese artist has set up a living space/project which combines art with everyday life in an attempt to free himself from the terms typically imposed by commerce. Here, he cultivates fruit crops and vineyards, setting up an alternative economy based on trade and also by hosting artist friends who participate in the restoration of the house as well as in the local scene.

The two exhibitions in Marseille are an extension of this initiative which focusses on economic, social, political and environmental issues; they introduce the industrial and working-class worlds into the art world. The exhibitions mirror one another, forming a double homage to construction and community gardens. Both are filled with works that evoke a worn aesthetic, weariness, fragility and occasionally, sensuality. These overarching themes are reinforced by a constant tension between shadow and darkness, the instability of the materials and an interplay between the breaking down and rebuilding of art historical and architectural notions as they relate to the local environment. Blues, yellows and ochres; all quintessentially Mediterranean colours, make up this constantly evolving space which depends on the hour of the day, due to the different transparent elements set up facing the bay windows or propped against the wall.

The geographical context of the exhibitions in Marseille symbolises two stages of the evolution of blue-collar working class milieux in the city; one of the more urgent issues for the artist. La Belle de Mai is the prototypical example of post-industrial decline; this district’s quick descent into poverty following the closing of tobacco factories in the 1990s led to its becoming one of the most blighted neighbourhoods in Europe. The recent arrival of cultural institutions such as the Friche, however, has played a part in encouraging a slow trickle of incoming middle-class inhabitants into this sector. In the Joliette neighbourhood; where the Frac is located, a more bourgeois approach to urban development has historically been used, with its Haussmannian-style residential buildings on the rue de la République, ex-rue Impériale. The objective here is to attract affluent populations to former industrial sites such as the Docks, with its working-class socioeconomic implications. This new-build gentrification in the Joliette neighbourhood has existed for some time, and attempts to populate the city center have in recent years led to a failed attempt to create an arts district on Chevalier Roze street—funded by ANF Immobilier—with shopping centres, galleries and artists’ studios (including the previous studio of Wilfrid Almendra). The district also has a certain amount of vacant buildings due to turnover.

By interweaving familial and collective histories, Wilfrid Almendra depicts working-class populations through observations gathered from first-hand experience, providing insight into a larger proletariat class. With his installations and sculptures, he shares a vision of the art world as active participant in the world of labour. The artist focusses on shifting the paradigms of production and consumption by examining the material basis of society. Manual labour is honoured through hyperrealistic sculptures made of aluminium alloy which elicit a continual and amused questioning from the public with their metonymic allusions, referencing invisible labourers from the artist’s circle of friends and family. The sculptures have all been given proper names as titles: a pair of tap dance shoes, Teresa (2022) which reference a cleaning woman, encounters a pair of paint-splattered trainers called Nick (2020) which refer to an artist friend; Antonio (2022) is a pair of gloves. This work refers to an ironworker friend who supplies the artist with metal. The only piece to feature twice is Carlos, a cap which is on view at both the Frac and the Friche; a subtle reference to the sculptor’s father.

Taking into account the current social and ecological crises, the artist carries out his work based on a circular economy which advocates exchange, donation and recycling. Copper has a prominent spot in his practice: once an easily-accessible raw material, its value is now at record highs due to inflation and high demand because of the metal’s use in construction and also due to social issues with regard to working conditions in mines where extraction takes place. The artist buys copper from resellers in order to make the majority of the works presented on the panorama of the Friche.

Some of the secondhand objects tell the story of an encounter or negotiation with the original owner. Martyr (2020) is the result of different materials (wood, steel, glass, polyester sheeting…) which have been superposed on top of one another; the roof beam was reclaimed from the workshop in the Northern district of Marseille where the artist set up his atelier and also an exhibition space called La Rose. A “martyr” is a board which was placed between a cut-out and a worktop in order to protect the surface. Here, the beam preserves in its very form the traces of its past while bearing witness to the notion of labour the artist seeks to conserve and celebrate by giving prominence to the work in the exhibition at the Friche. Positionned directly in front of the bay window like a room divider, the work shows off a poetic variation of colours while paradoxically obstructing the view of the city. At the Frac, a reclaimed fuel canister in the installation Sing and cry little bird (2022) was chosen for its ochre hue and also refers to the heavily polluting source of energy it typically contains. The canister also references the community gardens the artist often cites. As of this summer, oil boilers are no longer allowed in new construction projects; a change which will impact many households in the countryside where this type of heating is most common, and for which supply is now becoming a challenge. Gas oil prices are directly linked to the petrol market, and heavy taxes are now inciting consumers to turn to more renewable energy sources. A true ready-made, the oil canister as both symbolic and memorial container documents the difficulties of some of the more socioeconomically fragile segments of the population.

Object memory is made visible at the Friche, where the exhibition space is covered with rubble: the pieces scrape, break apart and transform bit by bit as the public treads upon them. This improvised carpet, made up of altered materials, is imbued with a notion of deconstruction/reconstruction in which residue comes back to life, metamorphosed. The works create narratives as well as tension, revealing themselves through the paradox of the subject represented, the materials used and the way in which they are juxtaposed. This is the case with the aluminium alloy slugs (Slugs, 2022 at the Frac), of an intense blue lapis lazuli colour, whose prestigious connotations echo that of the crest of a peacock perched on an oil canister (Sing and cry little bird, 2022). Habitually a symbol of beauty and classical ornament in the Fine Arts, this one by contrast is missing its colours, having been robbed of them, or perhaps even wiped out, through intensive farming. The feathers have become a mere formality, recovering their colours at the Friche only when associated with copper. Exoticism to the point of disappearance is therefore a theme which resonates with current ecological issues.

At times inciting a poetic and leisurely stroll around objects related to workers and invisible labourers, at others the memorialisation of a more politicised vision, the symbolic potential of “Adelaïde” reveals itself to visitors as they peruse through the exhibition. Through the use of vocabulary from the construction site: with its boulders, sheet metal, rubble and spray fireproofing, the artist explores a scenography of labour, where detail and structural reinforcements insinuate themselves, each element forming a system. Multiple subjectivities therefore activate the exhibition, concretising the interpretive possibilities that Wilfrid Almendra offers to his visitors.