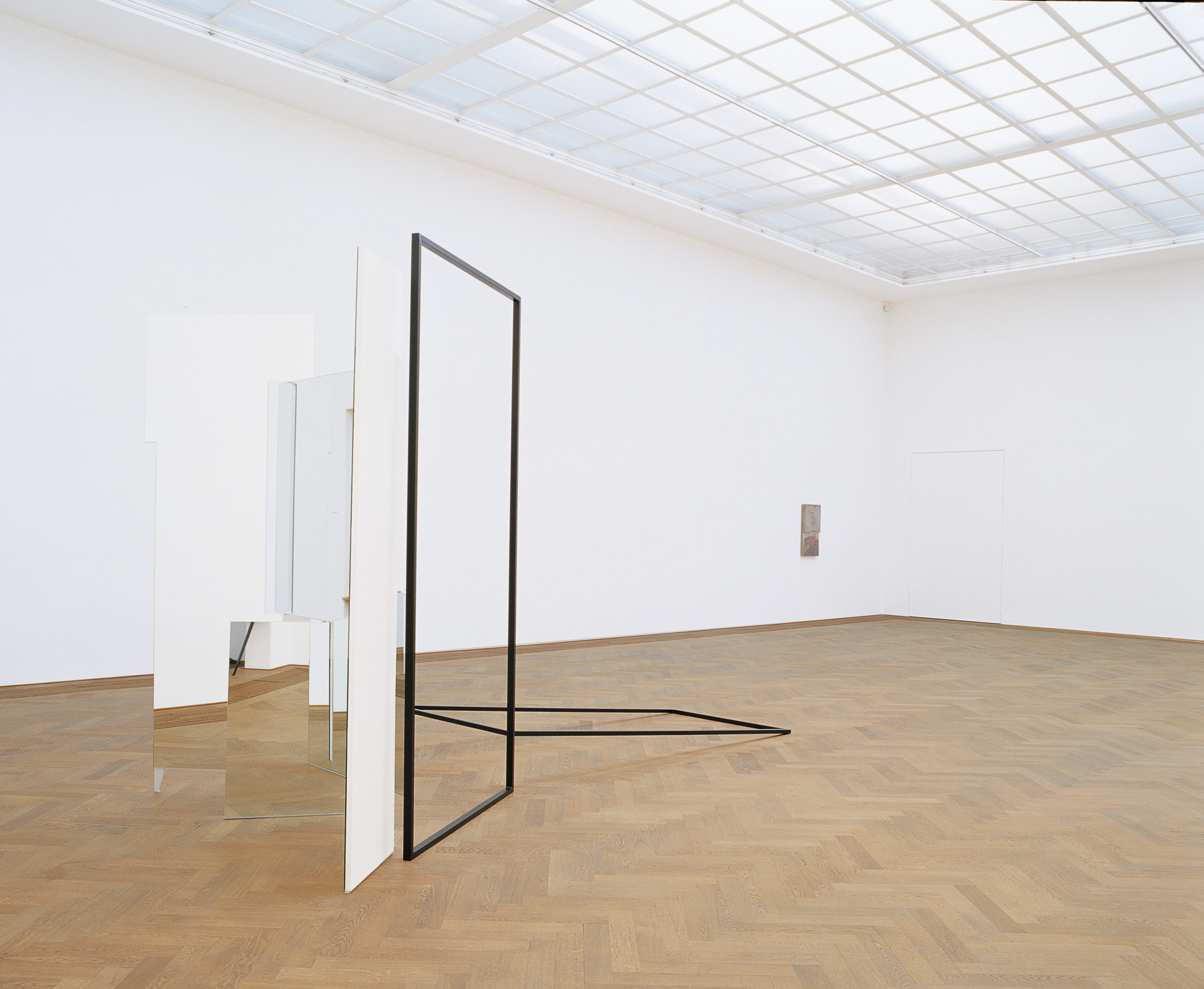 Nairy Baghramian was born in Ispahan, Iran, in 1971. She fled her birth country with her family for political reasons and found refuge in Berlin, Germany in 1984, at a time when the city was still split in two by a border dividing the country into East and West. The artist’s work addresses temporal, spatial and social relationships with language over the course of history as well as in present day. Working with sculpture which is frequently combined with photography, she references architecture, interior design and domestic spaces, incorporating the human body as well. She reinterprets art history through the exploration of inherited forms and concepts. “Parloir,” the solo show currently on view at the Carré d’art in Nîmes, a first for Baghramian at a French institution, is an opportunity to sketch a portrait with this tradition-defying sculptural work as a starting point.

The artist’s entire œuvre aims to disrupt space. For her, space is a material to be manipulated without ever treating it as a territory to be conquered. On the contrary, her approach examines the margins, the interstices; it lingers along the walls, cradles the angles. She looks closely at marginalised forms and spaces. By carefully determining every aspect of each of her exhibitions, including what goes on in the zones which are designated as peripheral by each venue, she consistently defies traditional ways of thinking.

Baghramian was trained at the l’Universität der Künste (UDK) and at the Freie Universität, Berlin, as well as at Goldsmiths College, London. She studied art history, visual arts, as well as theatre, dance, cinema and architecture before discovering sculpture, which became her preferred form of practice. “After leaving Iran with my family in the early 1980s, the American theatre and dance scene, as well as theatre in both East and West Germany were of profound influence for me. I was lucky to see some exceptional productions by Yvonne Rainer, Merce Cunningham, Martha Graham, Robert Ashley, etc. Theatre directors like Ruth Berghaus, Einar Schleef, Heiner Müller, Frank Castorf and also René Pollesch also shaped my way of thinking, (1)” she explained. “Before even approaching the idea of sculpture, there were these ongoing inquiries—into notions of representation within space, socio-political contexts, temporality, gender studies—which this environment was steeped in.

In her practise, the artist takes into account the body as it relates to dance, keeping in mind one professor’s comments on the importance of breaking bodily movements down into distinct elements. The contextual approach that she employs in the process of creating exhibitions begins with a sensorial inquiry of the site, which has an effect on the body and all of its faculties, in order to create a methodological thought process with regard to the notion of in situ. Through the institution, she explores the relationship between the site, the public, and the works, situating the history of sculpture in its institutional context. She is careful to introduce the local aspect into each situation, integrating it into the narrative thread. The conditions in which the works are presented are of equal importance to that given to the works themselves. “The spectator is invited to think about what makes art, art. Which auras are immanent to the works themselves, and which have been added through the act of exhibiting?” (2) writes Baghramian, in a forthcoming publication. “An artwork is always measured by its success. This is without a doubt the underlying reason for my interest in disappointment and its possibilities; it is a notion I revisit constantly,” (3) she goes on to explain. “Peripheral spaces are important in my work because they are a reminder that any practise which does not take these spaces into account, remaining unaware of its own automatisms or is unable to resist its own conventionality runs risk of becoming a simple embellishment, a product of global consumerist culture.”

The use of diverse materials such as steel, resin, leather or marble may seem indicative of art historical references, however the objective for the artist is to call attention to the constant pressure with regard to the production and reception of contemporary artworks rather than an attempt at positioning herself within recent art history. Baghramian examines the relationships between forms and their imbalances through the creation of dialogues. Instability emerges as one of the more essential the themes in her work—everything is always on the verge of collapse. To remain standing is the equivalent of putting up a fight. And yet, the different materials hold up while holding one another up. Through her practice, the artist revisits notions of memory and fragility through sculptures which are conscious of their own vulnerability.

Misfits, which was presented last year at the Furlane Foundation, a modern art gallery in Milan, questions the relationship between the aesthetic object in an institutional context, while also repositioning the boundary between interior and exterior. The installation is made up of five large pieces divided into two parts and made from different materials. Taken separately, the elements are reminiscent of the structures made from geometric building block sets. These toys create opportunities for children to think in terms of how objects must inevitably fit together. In this case, the structures could only fit together with difficulty. By proposing a dysfunctional experience, the artist reveals the importance of experimentation inherent in the accumulation of life experience. The photographic portrait of the sulky little girl—a negation of the very genre of children’s portraiture—serves to drive this point home. Far from established canons, Misfits allows for the possibility of error, calling for uncertainty. “Try again, fail again, fail better,” (4)  we might say, to paraphrase the famous Beckett quote. Baghramian frustrates the viewer’s expectations a bit further by playing contrasting textures off of one another. Whether architectural, organic, or mechanical, the works produced are hybrid bodies, surprising assemblages exploring their interdependence. This prosthetic formalism is all the more troubling in that it emanates a kind of sensuality.

Beginning in 2007, Nairy Baghramian became interested in design; specifically, in the work of the French-Swiss interior designer Janette Laverrière (1909-2011), whose work she happened upon when entering a Berlin library to take shelter during a storm. (5) She remained under the impression the artist was deceased up until a design historian put the two in contact. At the age of 98 at the time, the artist, still largely unrecognized by the general public, was still working in Paris. In 2008, the two women collaborated on a project for the Berlin Biennale whose title was “The Lamp in the Clock.” Baghramian designed the museography for the space, which was made up of four walls—a temporary structure—featuring four interior walls painted a mint green colour, on which a shelf and a bookshelf were hung—both were designed by Janette Laverrière. On the reverse side of the walls hung different mirrored objects designed by Laverrière, with the result being that it became difficult to distinguish interior from exterior. The two artists continued to collaborate up until the designer’s death, exploring her archives and producing new variations, always with the idea of pushing the boundary between design, which is considered utilitarian, and art, understood to be autonomous.

The work of Nairy Baghramian forms a many-layered reflection on sculpture practice and all of its current possibilities, given that many classic techniques are now disappearing with the advent of ready-mades and immersive installations. The artist develops counter-strategies which also serve as critical models for existing within the ideological spaces of art.  In this context, artworks are inextricably linked to the time, place, and socio-political context in which they are made. The boundaries between positive and negative are abolished, as are those between bodily and mechanical, organic and geometric, force and fragility, the object and its meaning, the sculpture and its mold; all contrasting notions which echo the role they have played in the history of post-minimalism and Arte Povera. Baghramian equalises form and background. At the Carré d’art in Nîmes there is a photograph entitled Portrait (the concept-artist smoking head), which can be interpreted as a space of free expression for the artist. In this portrait, there is a cloud, an ephemeral phenomenon, frozen in its evanescence, and fixed on a large-format print. By cultivating contrasts and valorising the dysfunctional, the art of Nairy Baghramian opens up a multitude of possibilities by constantly challenging the spectator.