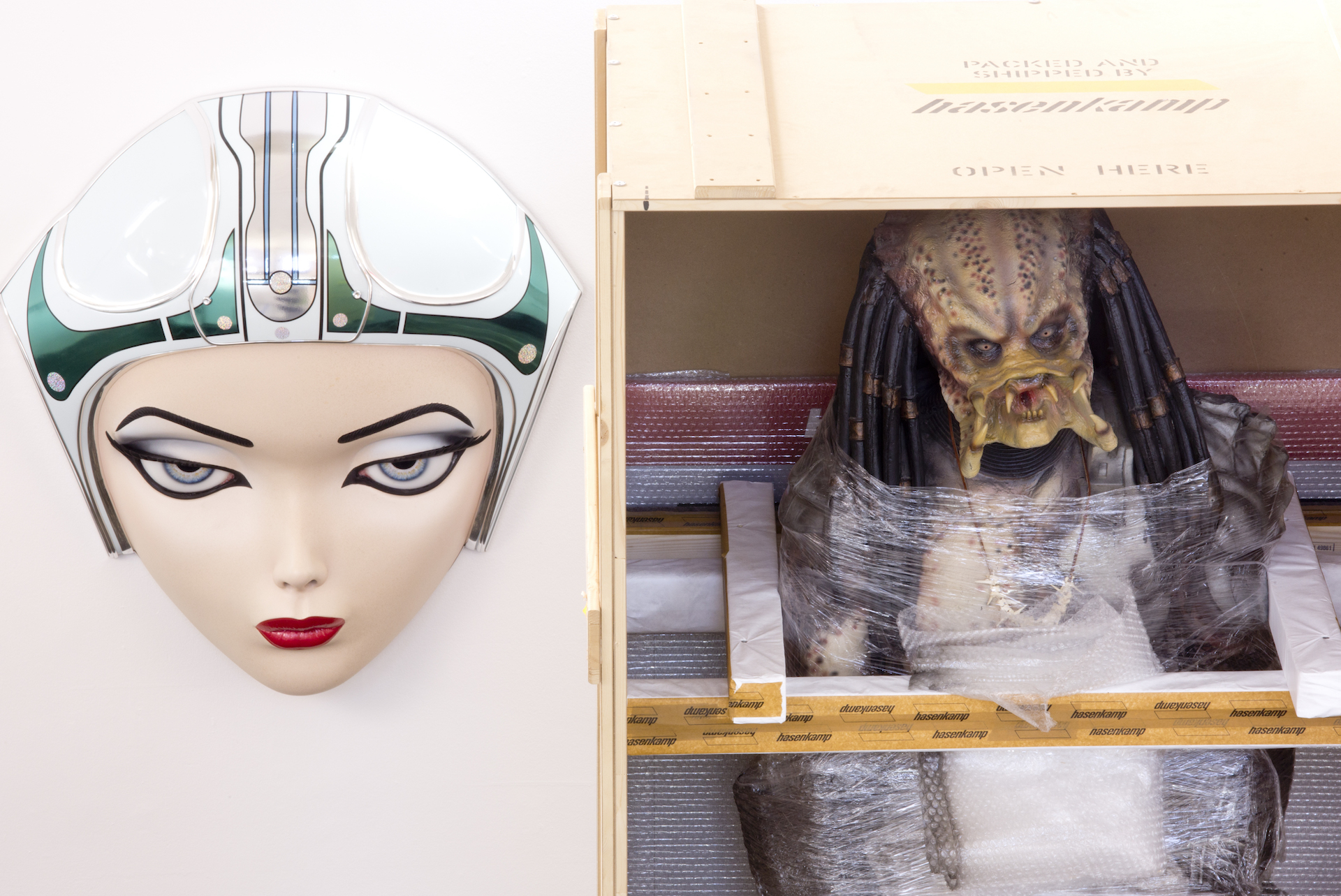 For a while now, the “self” or “ego” has no longer been depicted as that coherent monolith dear to the generation of Romantics. Rather, it has been seen as a whole host of fragments as described1 by Sherry Turkle in her preamble to Emotional Supply Chains. The appearance and expansion of the web with its tangled mass of platforms designed for self-representation, not to say self-curating, have probably magnified this finding, fuelling a large number of questions in the form of exhibitions and essays. Looking at the human factor through the so-called distorting prism of the post-Internet seems to have become a hackneyed cliché for whatever is contemporary, hammered home by Ryan Trecartin and by those trying to find out what the web can do to art. Filled with networked characters and chatterbox avatars, the exhibition, whose brief is to explore the construction of identities based on a digital yardstick, thus seems at first glance to be engulfed in a breach that has already been widely examined. This impression is underpinned when you enter the old chapel which serves as a setting for the Zabludowicz collection. The entrance is blocked by the platform devised by Simon Denny to present the bulky “personal effects” of Kim Dotcom. Shown in particular in 2015 in the major show which the MoMA PS1 devoted to the artist, then at the Lyon Biennale, the installation is symptomatic of a desire to depict a character constructed online and incarnated by the possession of objects acquired as a result of a capitalization of clicks. There follows a succession of narratives constructed by artists from different generations and social backgrounds, only a tiny handful of whom can be mentioned here. Encompassing themes ranging from gender representation to the portrayal of national histories, the works show a preference for the dialectical form, enabling the voices of the avatars and pseudonyms to intermingle, and contradict each other. 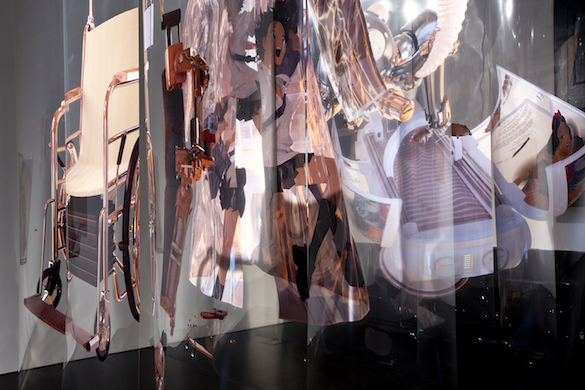 The exhibition circuit starts with a description of an existence governed by digital flows, but it nevertheless subsequently reveals older logical systems controlling the circulation of information and imagery. This is illustrated by the recurrent presence of the cathodic spectrum within chosen works. First up, it was a TV reality programme, “Thailand’s Got Talent”, which inspired Korakrit Arunanondchai to make a re-reading of body painting in his video Painting with history in a room filled with people with funny names 3 (I am a machine boosting energy into the universe). Upstairs, 19.30 (2010-2011), a work byAleksandra Domanovic, aligns credits from TV news programmes from the former Yugoslavia with pictures of rave parties in the small screen’s 4/3 format. Radio also has pride of place in the show with the work created specially for the occasion by David Raymond Conroy. (You (People) Are All The Same) (2016), filmed during his residency in Las Vegas, has been split up into four episodes launched and wound up by credits borrowed from the American radio programmes This American Life and Serial. Imitating the intonations which punctuate these programmes, a female voice describes the artist’s wanderings and procrastinations as he looks for an idea which might wrap up his stay. 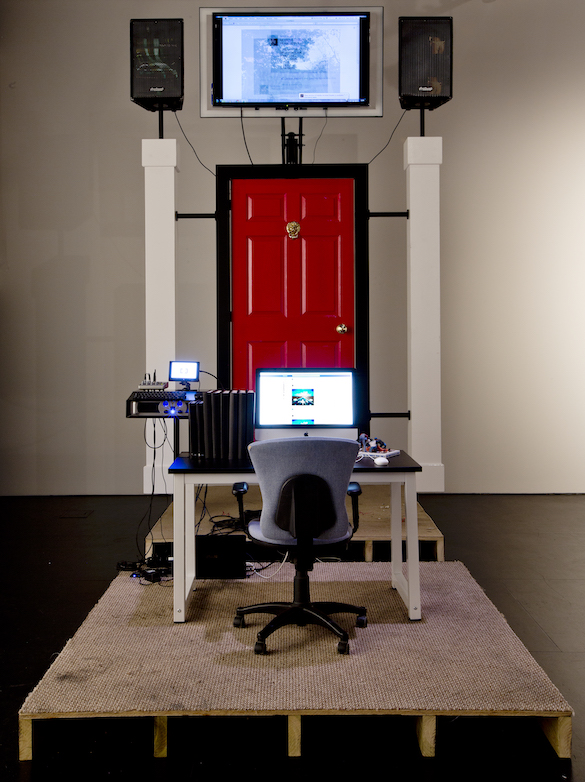 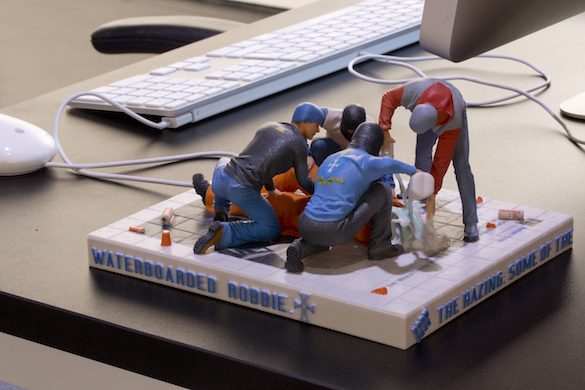 The exhibition is not trying to confront a specifically digital art, devised and presented online. Through the various rooms, the Internet is seen more like a parallel world, an experimental area whose findings are given tangible form in the exhibition space. Complying with a requirement connected with the collection, or expressing a desire to occupy the space, the new works on view are often sculptural adaptations of performances. In one and the same space,

the Instagram thread of @therealstarkiller alias the artist Frances Stark, takes shape as a succession of square-format images with more or less saturated filters, affixed to the wall, and a performance executed on Facebook in 2011 by the English heart-throb Ed Fornieles. For the show, to use his own words, the artist has “totemized” the play performed by 34 actors whose brief was to incarnate fictitious profiles on Mark Zuckerberg’s social network. Dorm Daze thus consists of a desk enabling people to consult the archives of their digital adventures in front of a red door, perhaps the door of a fraternity of Berkeley students by whom the Facebook pages are inspired. Further on, Ann Hirsch, a young English artist, well-known for her Youtube performances questioning the extremely sexualized representation of women on the website, presents a new sculpture adapted from Playground, a piece created for the Rhizome platform in 2014. Two computers, each placed on an office chair, initiate a conversation involving, on the one hand, XoaNNioX, Ann Hirsch’s pseudonym when she was a pre-teen, and, on the other, lieshadow, her first virtual amorous encounter. By giving form to the dialogue which took place in an AOL chatroom in the late 1990s, Ann Hirsh explores the historical depth of the Internet, replacing the worried representation of a ubiquitous and immediate network by a distance and a certain intimacy. 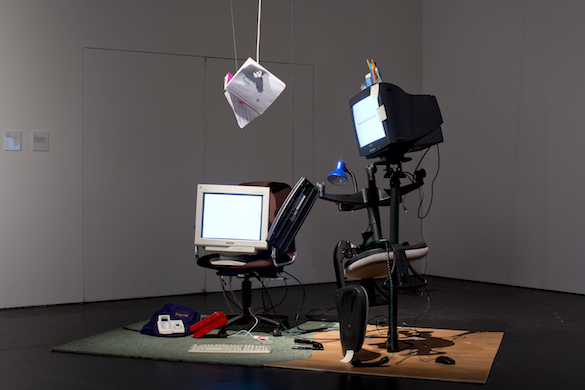 Without any particular consideration for ‘digital natives’, and although slightly heavy going, this sequence of divided narratives and characters avoids proposing a one-sided vision of a complex and ramified subject. Preferring to present the digital age in the continuity of older logical systems to do with self-representations and the incorporation of popular culture in art, the works sketch out a form of digital realism rooted in space which, without any forward-looking vision, imagines the possibility of being incarnated on the other side of the screen.

[1] “Each of us is a multiplicity of parts, fragments, and desiring connections”, Sherry Turkle, Life on the Screen: Identity in the Age of the Internet, 1995, quoted in the exhibition’s introductory essay.