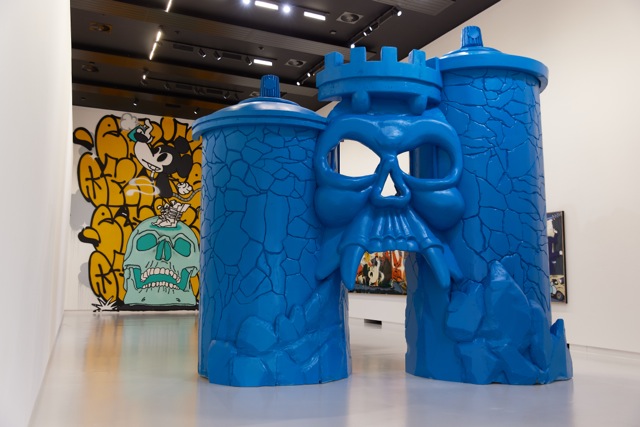 Exhibiting works by graffiti artists1 in museums– that is to say the displacement of an art born in the street into a both literal and metaphorical institutional space– is not a new thing. From the beginnings, artists such as Jean-Michel Basquiat had thought how he could operate this displacement while being true to himself at a time when the opposition of the high and low cultures was still very distinct. The exhibition ELNINO76 at the Musée d’art de la Province de Hainaut is therefore part of an already established practice, which does not lessen its relevance given the cultural and social characteristics of the city of Charleroi, as well as the singularity of the orientation of its collections. Known and recognised for his work in his home town (as well as abroad), ELNINO76 took over one of the rooms of the BPS22, the one that most resembles a white cube to affirm the change of context of his work, playing with the codes of his practice while adapting to what it is usual to show in a cultural institution rather mischievously.

For the visitor to enter the exhibition, he built a porch that sets the tone of a universe fed by visual jokes from comics and cartoons. Two bright blue towers that seem to be inspired by the architecture of Playmobil castles frame an arch surmounted by a skull and crossbones– emblem of the pirate flag of “Jolly Roger” that gives the exhibition its title. A closer look reveals that the two towers are two cans of spray paint erected as monuments. Welcome to the realm of ELNINO76. With this construction, the artist immediately transforms the museum into a space of his own.

On a large wall at the back of the room, a large fresco made in the same way of those outside– quickly, the realisation of forms and colours, on a scaffolding, nose against the wall, that is to say without distance to judge the good proportions– is a self-reflection of the role of the graffiti artist within the institutional space. A sort of alter-ego, a Mickey Mouse, perched on a giant skull, is painting large letters with a spray can. Popular iconography and conceptual reflexivity answer are in dialogue.

On a neighbouring wall hang three paintings of a classical format that the artist experimented with for the exhibition. While retaining his favourite motifs, cartoon characters, skulls, he has introduced elements of scholarly culture, including fragments of ancient statues. The artist plays with the codes of classical art overturning hierarchies so much so that the visitor no longer understands if they are visiting a museum in the company of a Mickey Mouse, or if this feeling is a passing into another world of fantasy where the interiors are also decorated with precious sculptures. In addition to the iconography, one must also note the inventive workmanship of these paintings painted (of course, as it should be for a graffiti artist) with aerosol paint, particularly for the tracing of the black contours that surround the figures where the squirts of the spray can manage to give the equivalent of a fine gradient. On the mezzanine, the artist installed his studio material under a glass case (sketches, used spray paint cans…), maintaining an ambiguity between simple documentation, ethnological collection and staging, producing an effect of relic that recalls Daniel Spoerri’s picture-traps. Moreover, the whole was placed under the protective and electric gaze of a St. Sulpician statuette of a Christ adorned with a flashing Christmas garland, also from the studio. Decorative element or sculpture? Both at the same time. ELNINO76 has definitely succeeded in bringing the funny disruptive spirit of his approach to the BPS22.

Yet despite the museum’s specific missions and collections, it was in fact perfectly suited for the exhibition as it is located in Charleroi, a city with an industrial past where culture and training for the working classes are part of the local history. The museum is housed in a building that is part of the Université du Travail (University of Labour) campus established in the early 20th century. Artistic practices emanating from popular culture are therefore central to the museum. Thus, one of the branches of its collections hosts visual productions linked to the Belgian punk scene– zines, leaflets, and mail art (exhibited this year in a series of exhibitions entitled “Merci facteur” (‘Thanks Post-man’))– which are in many ways similar to graffiti. In these conditions, inviting ELNINO76 to occupy the space was very coherent.