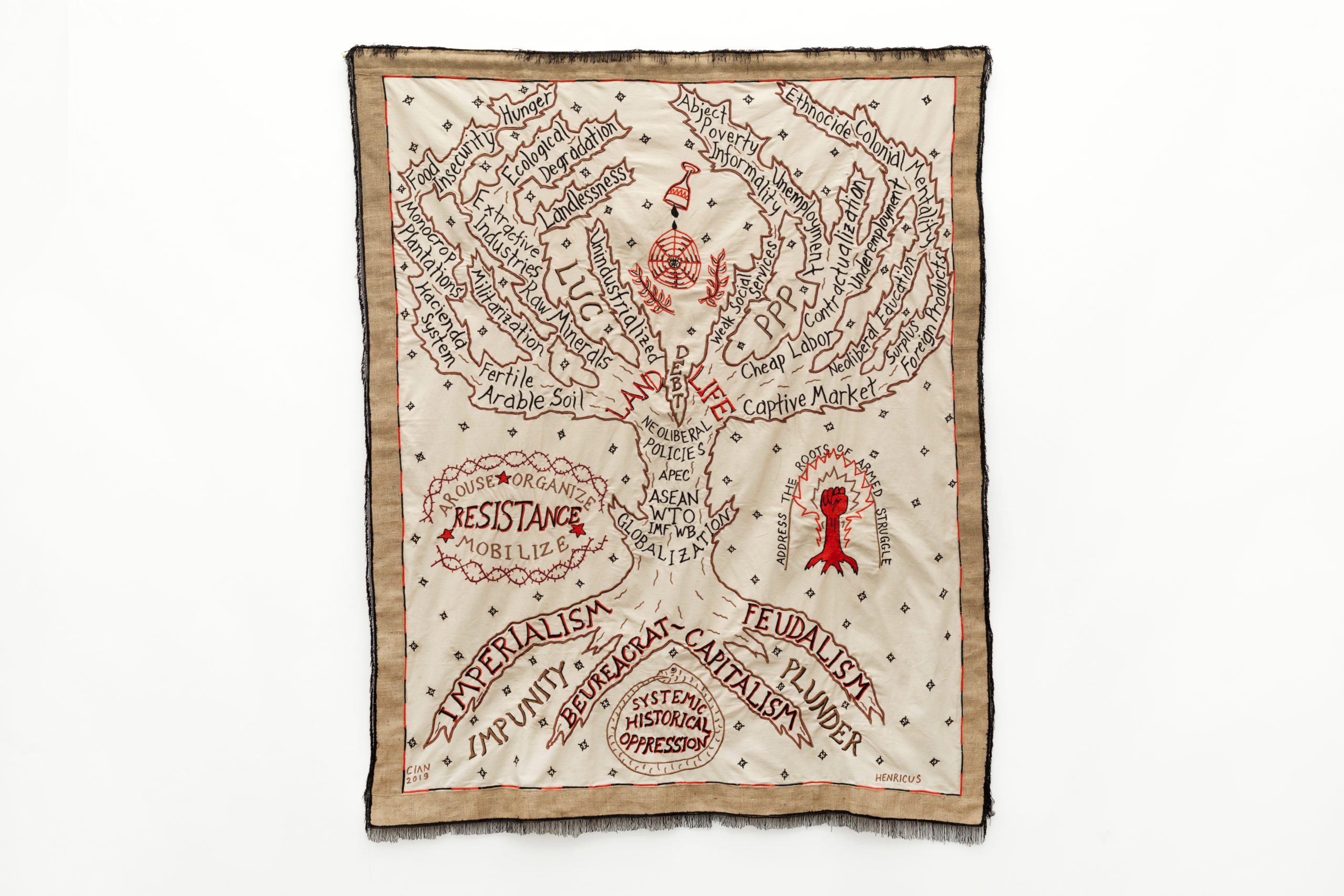 For its eleventh edition, the MOMENTUM biennial, – which originally was limited to the Nordic context, as it is held in various spaces across Norway – has widened its scope to the international scene by entrusting its curation to Théo-Mario Coppola. A curator committed to thinking about art from a political standpoint, he has developed an exhibition based on a rigorous theoretical framework, where the traditional mission of biennials to consider art and its relationship to wider contemporary social issues is taken very seriously. The event will be accompanied by a collection of essays to be published in September.

As a theme for this biennial, you have chosen the notion of “commons”. For you, what is at stake here?

In its Ostromian1 understanding, the notion of “commons” is interwoven with the notions of “horizontality” and of “being together”. It allows a renewal of the relationship to utopia, of the elaboration of forms of resistance, and of the establishment of solidarity. One of the major challenges of our communities and societies is to rid language of its forms of domination and power play, and to enrich it with new thought. We cannot continue to think about the present and to envision modalities for a future with words that are rather inadequate to reality. Without a renewal of concepts, notions, and methodologies, we will reproduce uses and dynamics that are at odds with contemporary issues.

In France, with the 150th anniversary of the Paris Commune, one can immediately see the political stakes involved in rethinking the common. Your title also touches upon another political reference: the House of Commons of the United Kingdom. Could you explain why?

HOUSE OF COMMONS inscribes itself in a multitude of references, and not only the current British and Canadian lower chambers of Parliament for that matter. It is a polyphonic title that should not be understood in a single language, nor in a single socio-historical context. It has ramifications within several societies and countries, in Norway and elsewhere. The first word, “house”, can be translated as “chamber”, and that brings in other meanings, such as “room” or “workshop”; but it is also linked to the “people’s house” and “house of culture”, to give just a few examples outside the parliamentary field. The word “commons” is part of a complex ancestry, which would deserve further development. In a radical sense, the commons can be understood as a challenge to modern democracy or to states whose numerous limits go against principles of freedom, equality, emancipation, and living together, in favour of a social withdrawal and a re-assemblage of modes of domination and power structures. Following the principle of a gesture of affirmation learnt from activists and minority groups, the act of reclaiming these two words is a way of operating a historical, political, aesthetic and philosophical displacement, which then allows to reappropriate them too.

In other words, can art or, as you prefer to call it, “aesthetic practices”, constitute a space or a common ground as a place to meet for debate and action?

Beyond movements, disciplines, and notions, contemporary aesthetic practices can be understood as real and potential spaces of discussion, interpretation, and reformulation. The expression “common ground” can be relevant if it is taken in the sociological sense of “situation”. On the other hand, if it is rather understood as an “available space” or even a “space to be occupied”, even within the context of a liberation movement, it must be used with precaution. We must be careful not to misuse the word “commons” by instating a universalist reading of it. Who decides what is put in common and for whom? Who has the right to change this and for what purposes? And whose place is thus being taken? The commons are a condition of existence and an ethical imperative. Everything is potentially to be put and thought in common, provided that the history and cultural specificities of communities are heard and respected. The commons involve thinking about the specific conditions in which they find expression. They invoke more subtle registers of thought and action, informed by postcolonial and indigenous studies. Many lands have been “snatched” by colonial powers and the phenomenon of colonization persists in many parts of the world. Moreover, shared contemporary aesthetic practices do not mean that “common spaces” will emerge. If they do open up spaces, these practices require that the institutions that host them apply self-criticism. The commons require us to learn and unlearn. How to establish a configuration of spaces that are effectively common is the challenge.

However, it is quite typical for biennials to put forward current social topics, but in the end, they are often recuperated for tourism purposes. This thus defuses the issues raised. How do you think that you’ll be able to avoid this?

Until now, MOMENTUM was a biennial that was oriented towards established and specific scenes identified as “Nordic”. Its subtitle, putting forward this regional attribute, seemed to me to be a form of imperialism at odds with the requirements of a cultural institution today. I had it removed. I broadened the international scope of the biennial by setting up partnerships with several organisations, programmes and institutions, by inviting practitioners from different cultural horizons and backgrounds, and by thinking of the book as an element whose dissemination would be firstly global. It is also a platform of solidarity, of freedom and of radicality for the practitioners I have invited. Like you, I realise that a strategic discourse is being established by a certain number of biennials, not because they would be genuinely inclined to a debate of ideas and an exploration of social issues, but rather with the more or less stated aim of it being recuperated for populist reasons, and conforming to the establishment an official culture. This is a vector against which I want to fight. I don’t believe that there are simple projects to understand on the one hand, and complex projects on the other. We have to show relevant projects if we want them to be accessible. As curators, if we allow our curatorial ambitions to be tempered with and do not defend the integrity of the projects of the practitioners we work with, we comply with forms of domination. There are articulated aesthetic proposals that deserve to be supported, beyond current conformism and trends.

Do the different thematic areas that structure the biennial, being new forms of governance, resilience, empowerment, and the protection of ecosystems, constitute for you the different aspects that define the “commons”?

Yes, in part. The commons induce a set of social and aesthetic dispositions whose assemblage allows for the renewal of critical thought, the affirmation of a political commitment, and the construction of a coherent discourse on contemporary aesthetic practices. Forms and ideas belong to the same continuum which requires the inclusion of a diversity of references and contexts of cultural production, and intersectionality as a tool for deciphering trajectories. New forms of governance, communities and their defence, environmental protection, and counter-narratives are complementary elements. Contemporary issues do not exist in a compartmentalised manner. They resonate with each other. These axes are intertwined through the collection of essays, the events and the collective exhibition, which are the three components of the biennial.

How did you choose the artists in relation to this set of issues?

I invited people with different practices, sometimes at the crossroads of several disciplines. The work of these practitioners attests to a sincere commitment, a fine and articulated research, a refusal of conformism and trends, and the will to shift the paradigm. Their projects inscribe themselves in the history of critical practices, of uprisings, and of the rejection of the artefact. During the research and preparation period of the biennial, the different thematic areas of HOUSE OF COMMONS guided my choices, but also led me to question in return what “contemporary art” can lead to in terms of a reduction of aesthetic expression and ethical principles. This is also why I prefer to think about “contemporary aesthetic practices”, including architecture for example. This practice is present in the exhibition, through the project of the Mexican architecture studio S-AR, with whom I began working in the summer of 2020. Together, for several months, we have thought about pavilions that can be dismantled, moved and reassembled, which produce a synthesis of different aspects of their research in relation to the environment and local communities. The three pavilions they have designed have synecdoche titles: the “staircase”, the “platform’” and the “cylinder”. They have several purposes and are presented as the different states of a pavilion; that of hosting other works within them, of remaining in a state of potentiality, or a combination of both.

Could you give a few more examples that you think best embody the desire for “commons”?

For the exhibition, I have chosen first of all historical projects that testify to a lineage of critical art, and to the thought of what the possibility of being and changing the world order together implies. These include an iteration of a conceptual work by the group Kollektivnye Deystviya (Collective Actions), created in the USSR in the 1970s, a video of an anti-colonial revolt by Pia Arke, and a tapestry by Hannah Ryggen presented at the 1937 World Exhibition in Paris. There is also an important project by Maria Nordman whose work has significantly affected contemporary aesthetic practices. I wanted to invite practitioners whose approaches are sophisticated in their way of thinking of deconstruction and resistance. For example, I have in mind Camilo Godoy for his reflection on forms of colonial domination and the rooting of racist representations, produced within the framework of a co-production with the SOLARIS residency programme in Bordeaux. I commissioned a new film from Daisuke Kosugi in co-production with MOT in Tokyo and Volt in Bergen. This work deals with the way trauma manifests itself in the intimacy of memories through images and sounds, and their permanent remoulding in the psyche. This is his most personal video to date. There are also photographs by Paul Mpagi Sepuya that look at the studio as a space of experience and affinity, in which the bodies photographed and photographing do not entertain a relationship of fetishization, but rather of trust towards each other.

I imagine that the preparation of this biennial has played an important role in your own personal thoughts on your curatorial practice: has it confirmed previous ideas, or has it rather led you towards other trajectories?

In a contemporary context marked by domination, asymmetries and power structures, several values remain essential for me: ethics, intellectual independence, conceptual coherence and rigour in terms of aesthetic choices. The notion of commons is an opportunity to reinstate commitment to practitioners and to accompany them in their research, to reflect on the conditions in which artistic and intellectual works are produced, and to better define the possibilities but also the limits of curation. Since the beginning of my work on HOUSE OF COMMONS, I have had to defend the auctoriality of my project, as well as that of the practitioners’ projects. In a context of institutional domination that sometimes goes as far as predation, curators and practitioners are particularly exposed, and their rights poorly known or respected. After HOUSE OF COMMONS, I wish to pursue my research and thought on anarchist theories and experiences.