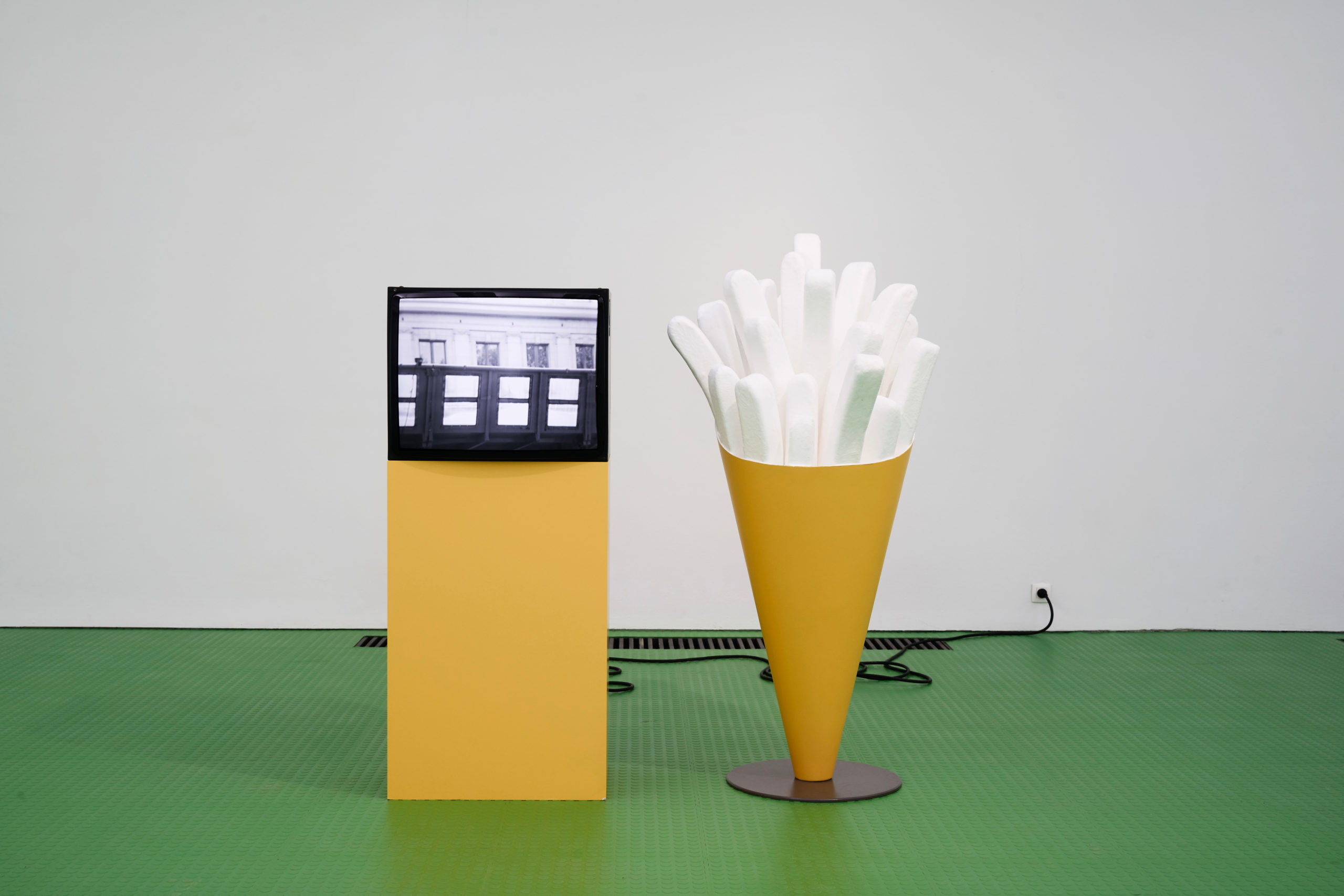 Hello, are we in the show? (How to see the same other thing)

At a time of anti-waste laws, fast-fashion recycling measures, and countless “zero waste” publications, the urge for recycling has been caught between a level of awareness and the claws of a paradoxical circular economy, where half-hearted political policies and the omnipotence of lobbies reveal a logic that finds itself in a vicious circle. Behind the ironies of the system, the management of waste first raises the question of what we consider to be an “end-of-life object”, and then, the question of the genuine possibility for it to be reused and recirculated. For more than two decades, the artistic practice of Simona Denicolai and Ivo Provoost has echoed the ecological concerns of a whole generation. Their singular and protocol-based approach to the world that surround them, can be considered as a dual act of retrieval and transformation, which nevertheless stands out through the attention they both pay to the very nature of “waste”. By rejecting the idea of a supposed uselessness of the now-discarded object, their holistic study of the world invites us to consider a circularity of matter and of the gaze. The duo keeps these circularities out of a binary representation of what is then considered waste, and an “economy” solely aiming at the profitability of recycling. The overlooked objects, left-behind in public space and in nature, serve their practice as vital and non-monetizable forces. Proof of a discreet form of militancy that is subtly reflected in their major exhibition at S.M.A.K.

“Hello, are we in the show?” starts with a black curtain behind which a horizontal window reveals the backstage. The shadows of a film and of silhouettes move slowly in the darkness of a vast room. The exhibition begins from the outset with a deconstruction, or the highlighting (in the shadows [sic]) of a circularity of production. Unlike Truman Burbank,1 the unwilling hero of a fake world, any given illusion is here instantly overturned. Rather, the devices used lead to a shift of the gaze and an immediate action on the environment within which the visitor situates themselves, becoming in turn subject of investigation, and actor. Present and future are weaved together like an inextricable blend, a retinal persistence that will never leave us, until the last step of the journey and the discovery of an animated film that shares the title of the exhibition. “Seeing the same other thing” is above all a matter of attention; the attention we pay to things and to our environment. An invitation not to choose between inside and outside, between before and after, but rather to compose with different temporalities and scales, like an inseparable whole.

“Hello, are we in the show?” is in constant metamorphosis. Tomorrow’s performance, Sunday’s tea party, or all the other protocol-based artworks exhibited in the first gallery, disrupt the order of time. Between the playground and the metro tunnel, the non-skid green floor pulls the institution out of its museum context and questions its function as a fixed, for conservation-purposes-only space. As a crossing point and place for encounters, supposedly distinct from one’s intimacy and privacy, this space is set to become “public”. The protocol-based objects come from a world that is, a priori, external, but whose origin the artists recall through the framework of their presentation. The interest of this exhibition with its “retrospective” modalities lies in the meeting of known and yet unprecedented forms, which testify to multiple spaces of coexistence. The duo’s work is a mediator that encourages the crossing of its own temporalities.

For the third edition of the ensemble in which they are presented, the far-fetched and colourful objects2 of Eyeliner are the perfect pretext for a writing tinged with humour, which pursues the aim to blur borders between private and public, and between object and its perception. This “high-seas line”, as the artists like to call it, interrogates the norms and ideas linked to exhibiting and to contextualising an object. Officially borrowed from Ghent residents, the decorative, window-sill artefacts will later on be returned to them in order to trace the urban itinerary of a new exhibition, which will go beyond the scope of the present one. Denicolai & Provoost reconfigure our approach to public space through its functions and duties, including that of activating a collective feeling of consciousness. Every Sunday, the exhibition becomes a sort of tea party. The recipe for the cake offered for tasting is developed following the request of a group of people to the city of Genk to erect a monument to the past.3 Tien Taarten – Ten Cakes (2018) questions the fixity of sculptural action. The work offers a moment of encounter rather than an erected object, which one would only bypass, impassive. Again, the easily recognisable objects pertain to popular and reassuring codes. However, their comforting colours and playfulness were not chosen innocently. Their characteristics and signs, diverted from their primary function, lead to the perception of another reality. This is for example embodied by the sculpture of fries exhibited further on, whose colours are inverted and thus subvert identification, and rather lead to the real content of the adjacent black and white video. In Los pasatiempos para personas inteligentes (2009), the big articulated arms of the machines at the Gare du Midi funfair are abstracted into a choreography that is more extractivist than festive, in reference to the expropriations happening in the neighbourhood.

The totemic earthworm (Earthworm since 2001) also found a place on the walls of the S.M.A.K. The invertebrate exhibited here is the original drawing acquired by the recently deceased collector Herman Daled, whom the artists discreetly pay tribute to. The worm –a metaphor for their ecological stance–, has been present in their work of these artists, as “managers of reality”, since their beginnings. The worm recalls the importance of the idea of “context”, on which the duo’s entire practice stands. The vermiform animal ventilates and nourishes the soil necessary to the balance of an ecosystem. The worm is this discreet and barely visible intelligence, like the artists.

Behind us, the room of protocols. Here we (re)discover an installation representing the Castellón fish market. The posters of animated drawings taken from the film A dream called macba, moca, moma etc. (2010) are hung up high, at a distance which changes from one to the other, and thus animate the space. In addition to thoughts on the codes of image-making and communication, the intentionally disarticulated narrative questions the unrest of a socio-economic cycle and its environmental impact, as embodied by the plastic scraps fished out by nets presented on the floor. Always subtly present, the artists’ relationship to ecology testifies to their sensitivity in regards to a wider ecosystem. Like a structure of horizontal equivalence, their practice reminds me of Emanuele Coccia’s Metamorphoses.4 The exhibition becomes like the “birth [which] is not simply the emergence of the new, [yet] also the drifting of the future into a boundless past.”5 Denicolai & Provoost put together forces that they transform, open up passages and modes of action that encourage the viewer to pay attention to what comes before them, what they produce and what constitutes them.

The next room is yet another astonishing valve, and the reunion of a wide range of research (scale models, drawings, videos, performances), with some of them unfinished. Here, gathered together in the form of an unprecedented archive, the research interrogates the idea and characteristics of space, and above all, the social aspect of public space. For the finally cut project of the Place Valladolid in Lille (2018), Denicolai & Provoost had imagined, in response to a competition launched by Euralille to consolidate the ground of the square, the redevelopment of the latter in a double economy of recovery and optimisation, which would have put forward the circulation of all forms of life. These works –or simply their remains in the case of performances– emphasize the simplicity of the gestures by which the artists operate the encounter between worlds with absurd administrative, legislative and appropriationist regulations, and of which they try to rid them. Flipping through the pages of Machin Financier (2014), which bypasses Peyo’s copyright, we rediscover several of the duo’s obsessions, such as the one for the roundabout. Already present in No Ice (2002)6 and at the heart of www.eeeell.com (2009), the roundabout catalyses certain illogicalities and inconsistencies regarding contemporary living. It reflects public attempts at decoration and communication, which the artists have fun subverting. Again and again, Denicolai & Provoost make visible and make free things of everyday life (the Smurfs, trees and roundabouts) with disconcerting clarity, in order to offer other circularities.

On the fringes, and yet already visible from the museum’s information desk, a sculpture-collage-ship balanced on the edge of the mezzanine stands out in this room. An unclassifiable leading figure due to the diversity of its components, Citizenship (2018) is yet another avatar of the compost-artists: a marginal compilation of digested scraps of their own history as an artist-couple, and the environments which they grow from. As if displayed in front of a window, the work underlines the absence of boundaries between intimate and public worlds. It points out to the direction of the final room of the exhibition, where one can find the non-narrative story of HELLO, ARE WE IN THE SHOW? (2020). The duo has been working on this project for several years now, the beginnings of which were exhibited at West (The Hague) in 2014. The animated film, which can be regarded as the most accomplished of their work, gives way to the contemplation of a slow multi-scalar stroll. It interweaves different worlds in order to create a patchwork of textures and relations, and condenses the hyper attention one has just experienced. Cycles of plants and animals hatch and meet, indifferent to human activity. Ecological by nature, the work of Denicolai & Provoost is a humus that recycles and generates social cohesion. It welcomes, transforms and allows moving around, in order to give life to ongoing and upcoming stories.