Some Frenchmen in New York 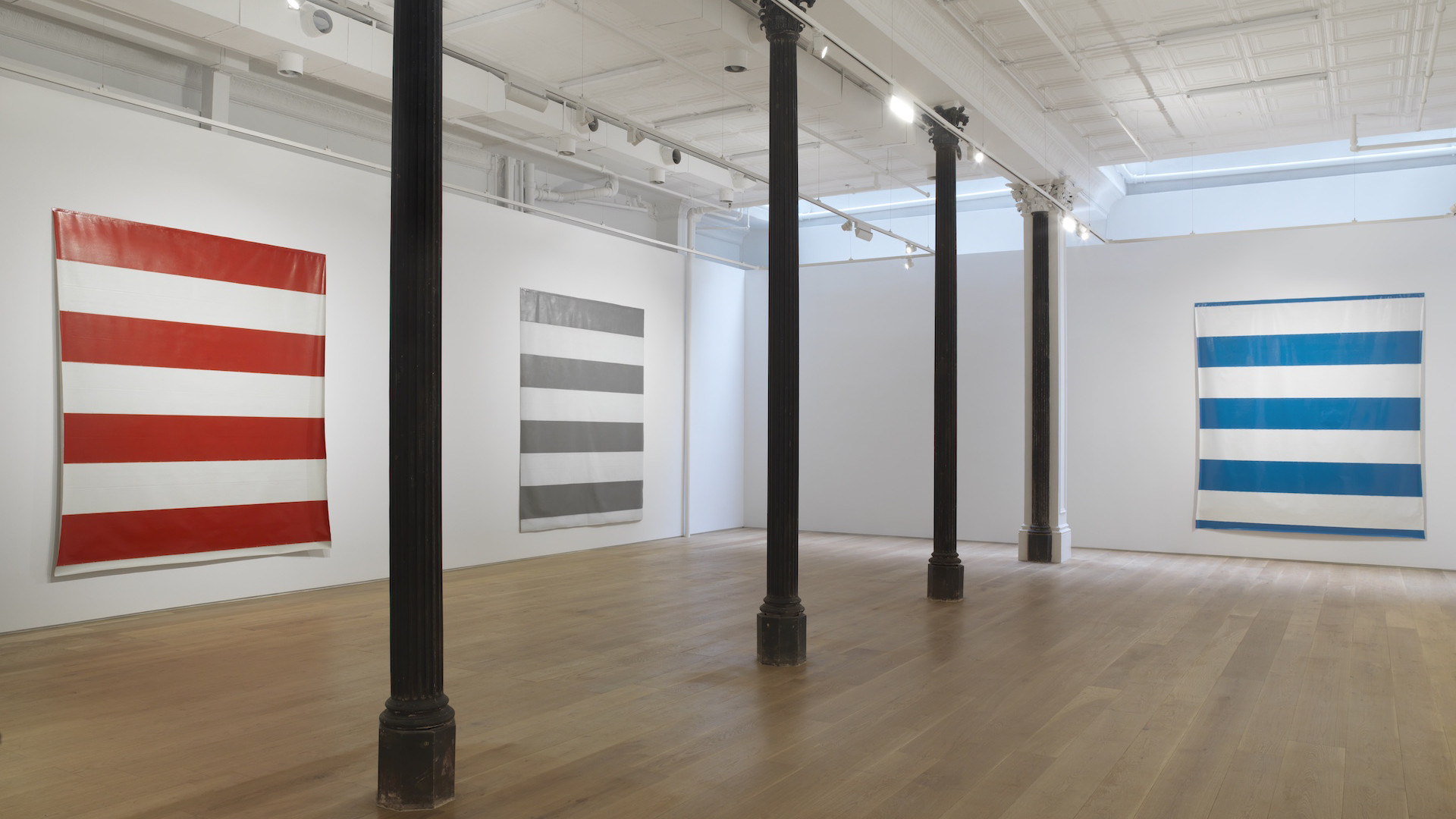 In the chaos that usually comes with a hasty move, and somewhat to my surprise, I recently stumbled upon my course in contemporary art history imparted at that time by Eric de Chassey on the subject of “abstraction after abstraction”, and the way in which artists in the wake of Jackson Pollock, Barnett Newman and others tried to carry on the modernist adventure, and develop an exploration of the possible paths of reduction and formalism. Added to a mainly American genealogy tracing the outlines of a cultural, artistic and critical hegemony (Clement Greenberg, Harold Rosenberg, Michael Fried…), in which New York came across as the indisputable international art capital, thus ousting Paris from that slot, was a raft of British, Italian and French initiatives, underpinned by a radical quality that was quite often as aesthetic as it was political. Also sketched out was a history of the way art was received and of the movements of influences, Matisse’s on postwar American painters, but also Manet’s and Monet’s—as is currently demonstrated by the exhibition “The Water Lilies. American Abstract Painting and the last Monet at the Musée de l’Orangerie—, followed by the influence of Action painting and Colour-field painting on French artists of the 1960s. But it would seem that the ball was not really tossed back, and a certain contempt set in among American artists with regard to European abstraction, as is illustrated by this declaration by Donald Judd during an interview with Bruce Glaser and Frank Stella: “I’m totally uninterested in European art and I think it’s over with”.1 It thus seemed that a set of practices that were closely related both formally and historically had been left on the sidelines of the powerful American modernist narrative: as significant milestones on a national and even European scale, they struggled (or did not even try) to acquire an international visibility and attract the attention of American critics, artists and gallery owners.

Well, at the very moment (or almost) when I was becoming lost in my reminiscences, cock-a-doodle-do!, several New York venues were holding major solo shows devoted to three salient figures, all deceased, belonging to that same generation: François Morellet at the Dia: Chelsea (“a body of work rarely shown and studied in the United States”), Michel Parmentier at Ortuzar Projects (“his first solo show in the United States”), and Martin Barré at the Matthew Marks Gallery (“the most important exhibition of his work in the United States”). The excerpts from the press releases for the three shows quoted here in brackets quite clearly convey, over and above the usual advertising effect that nowadays hallmarks this type of document, the delay in the reception of and interest aroused by these transatlantic artists. Last March it was possible to read in the New York Times: “French abstract painting of the 1960s, dismissed at the time by chauvinistic American critics, is having quite a moment in New York”.2

François Morellet’s case is especially interesting. First and foremost because of the prestigious setting in which the exhibition is being held, and its sheer breadth: it is occupying not only the famous foundation’s downtown branch but also the building’s outside wall, where passers-by can see the mural painting Trames 3o-87o-183o, with its electric red and blue colours, making a comeback forty years after being painted on a large wall in Rue Quincampoix to mark the opening of the Centre Pompidou. Like a cherry on the cake of apotheosis, the installation No End Neon will fill a 700 sq.m area for two years in the Dia: Beacon, an hour from New York, a temple of minimal art, if ever there was. Then, because the links between Morellet, who lived all his life in Cholet, a rather anonymous city in western France, and the United States are far from being non-existent—he was a friend of Ellsworth Kelly and Fred Sandback, and, for a while, found himself in the thick of a controversy with Sol LeWitt involving an accusation of plagiarism;3 his work was shown very early on in New York, in 1965, with the Groupe de Recherche d’Art Visuel [GRAV] in the Op Art exhibition “The Responsive Eye”, at the MoMA. Some of his works were thus known to artists like Frank Stella who, in the above-mentioned interview, acknowledged both his formal closeness with the GRAV, and the group’s earlier use of shared motifs, while at the same time seeking to radically distance himself from it, in both his approach and the formats he used.4 For many years, Morellet was associated in the United States just with kineticism, but, among its various merits, the show at the Dia manages to put into perspective the different periods of an œuvre that shares with the American minimal scene logical systems involving neutrality, formal reduction, and seriality, though tinged with an Oulipo-like spirit playing readily on words and constraints, which could not totally tally with the tautological vision of the art of someone like Stella (and his famous “what you see is what you see”). 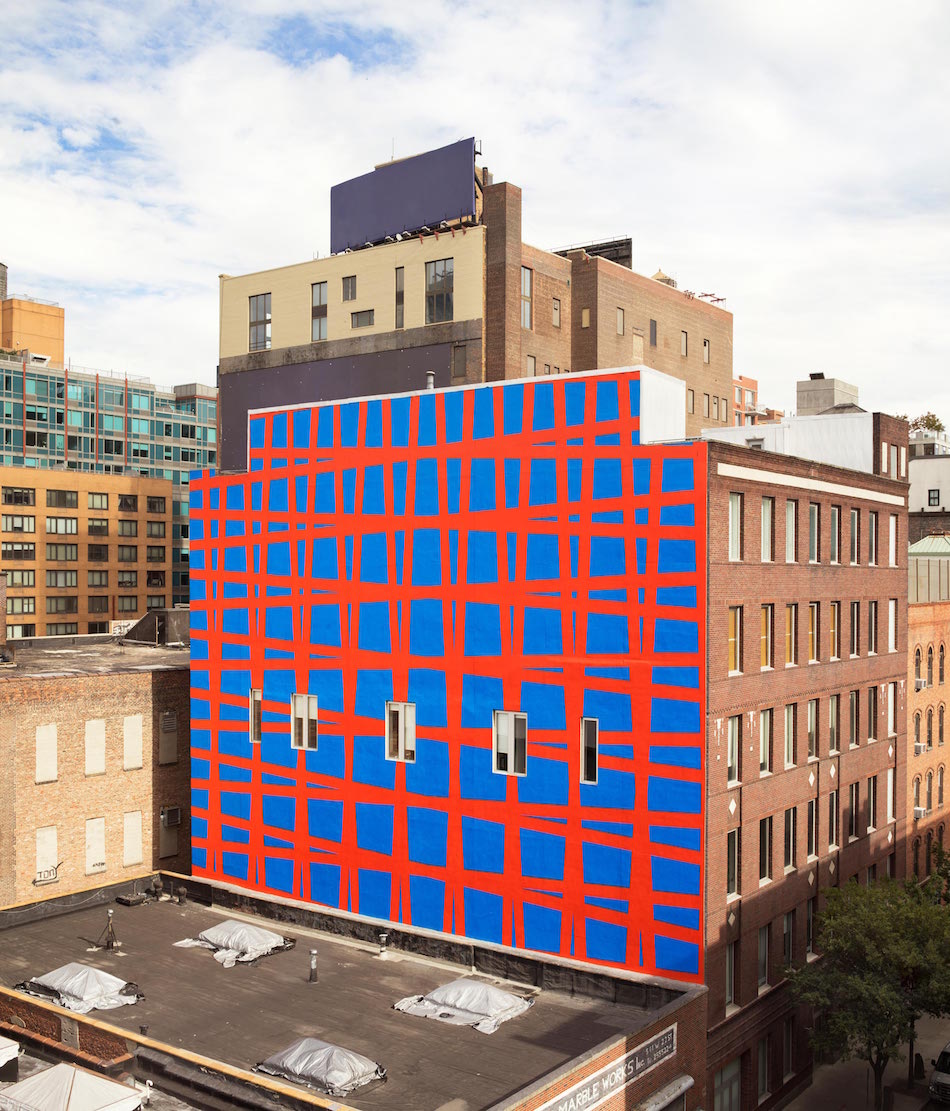 The operation aimed at re-including Morellet’s œuvre as pioneering, alongside that of his American peers, undertaken by the exhibition curator Béatrice Gross, backed by the Kamel Mennour gallery representing the artist in France—where, in 2016, she curated the show “Cholet-New York”, the beginnings of this large solo show in New York which formally linked him with Kelly, Stella, Sandback and LeWitt—, seems to find its legitimization and institutional confirmation at the Dia. It also corresponds with the goals of Jessica Morgan, who has been at the head of the foundation since 2015, to fulfil and enrich the artistic history associated with its collection. She duly declared at the show’s opening: “We must put all the pieces of history back together, and change our perceptions about what was going on in the rest of the world in the 1950s. From now on I cannot imagine Dia without Morellet because, in many respects, he foreshadows the works that we have always collected, and he has so much to say to our artists”.5

And the apparent and symbolic incongruousness of a Cholet-New York axis already harbingers others. In the autumn of 2017, the curator Marie Maertens dedicated to an “imaginary” connection a show held at Le 109 in Nice titled La Surface de la Côte Est, de Nice à New York, bringing together the artists historically associated with the Supports/Surfaces group (1969-1971) and a dozen New York artists born between 1970 and 1985.6 The return match will take place this summer in New York at four venues (the Emmanuel Barbault Gallery, the Josée Bienvenu Gallery, Ceysson & Bénétière, and Turn Gallery). The decision behind this project may, at first glance, seem surprising, because it is based on a formal parallel—a ‘rapprochement’—between two generations corresponding to radically different cultural, geographical, historical and ideological contexts which, up until now at least, seemed to a considerable degree to ignore each other. Except for Lucas Knipscher, who discovered those artists (in particular Pierre Buraglio) during his studies at Bard College, and whose work is directly fuelled by their input, Supports/Surfaces does not actually represent any reference at all for these American artists, informed more by Hard Edge Painting and Minimalism, as, incidentally, were their elders on the Côte d’Azur. A milestone has thus been skipped, and this exhibition project possibly attests, initially, to a history of non-reception. It is true that the work of Supports/Surfaces has been more or less invisible in the United States over these past 40 years. Marie Maertens puts forward several reasons for this, in particular the political reading of their works, behind which hovered the spectre of Marxism, the absence of any internationally recognized critical figure associated with the movement, and the lack of any clout on the part of the French market (unlike the German and Italian networks) and poor take-up from powerful galleries—a whole economic reality of the art world rejected, it just so happens, by Supports/Surfaces. Formed around strong personalities and informed by a certain ideological rigorism, the group might also, as it has had cause to wonder, have engineered the conditions of its own sabotage. In any event, in 2014, the New York gallery Canada, in cahoots with Bernard Ceysson, held a Supports/Surfaces exhibition, with works by, among others, Louis Cane, Claude Viallat, Patrick Saytour, Noël Dolla and Pierre Buraglio,7 which “gave many American artists a chance to discover, at that particular moment, that the subjects of those French artists were also their subjects”.8 Let us note here, in passing, the decisive role, in terms of the visibility and revived interest among young artists in Supports/Surfaces, played by the Ceysson & Bénétière gallery, which, in 2017, opened a venue in New York with a selestion of works by Claude Viallat. Scattered among several galleries, the American section of “La Surface de la Côte Est” gives rise to tighter forms of the twosome variety, often making it possible to establish closer and more defined aesthetic and theoretical parallels. So, by way of example, Louis Cane and Gedi Sibony are brought together around doing away with the author notion, through painting with the former and the found object with the latter, Lucas Knipscher and Dezeuze around the grid notion, and Claude Viallat and Justin Adian around the recurrence of motif, medium and colour. 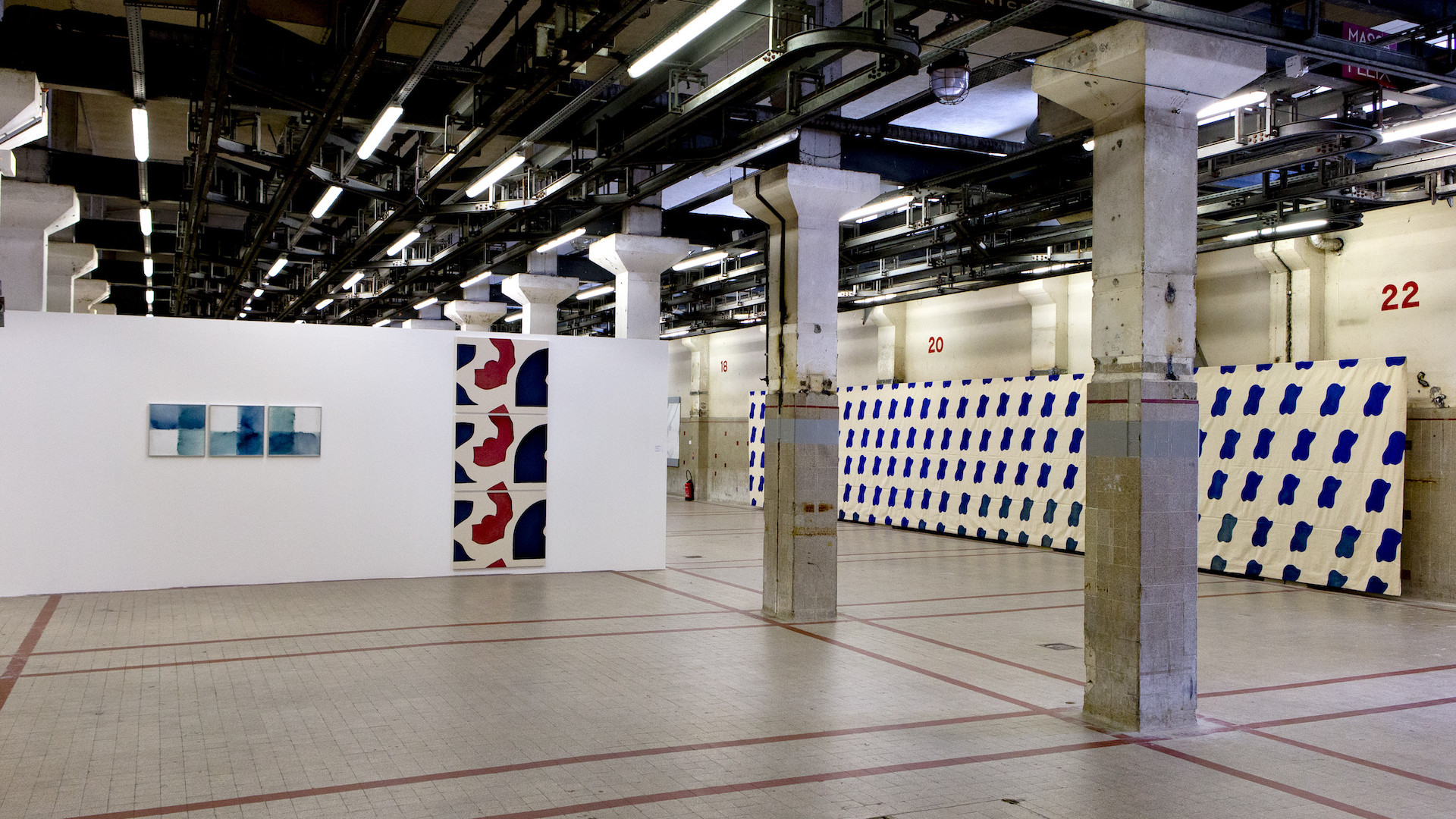 The challenge of these exhibitions thus consists both in restoring a visibility to artistic practices whose dissemination is sometimes geographically compartmentalized, and establishing the bases of a dialogue within a transnational history which does not glaze over its specific features. If this (re)enhancement jointly undertaken by art historians, exhibition curators, galleries and institutions on both sides of the Atlantic is helping to re-balance often geocentric canonical narratives, it is also being made on an economic level by re-galvanizing, market-wise, the ratings of artists whose production is sufficiently large and systematic to be able to feed the market. Far from any spirit of revenge or reverse chauvinism (these observations, needless to add, do not apply only to French artists), it seems interesting, above all, to analyze the way in which these examples of late and biased reception are part and parcel of a more general movement, ushered in a while back, involving a re-writing of history which operates at different levels and on several fronts, concerned with shedding light on its shadowy areas and widening the circle of its players to women, minorities and one or two “local” art figures. But because these latter are usually male, there is still much work to be done at every level.

[1] Initially broadcast by WBAI-FM radio in February 1964, this interview with Donald Judd and Frank Stella conducted by Bruce Glaser was subsequently edited by Lucy R. Lippard and published in the September 1966 issue of Art News.

3 In 1972, Flash Art published a reproduction of a work, attributing it to LeWitt when it was actually a grid made by Morellet some ten years earlier. The gallery representing the Cholet artist reacted by suggesting plagiarism, to which LeWitt responded with a letter published in the magazine at the origin of the misunderstanding.

4 Frank Stella to Bruce Glaser : “Well, mine has less illusionism than Vasarely’s, but the Groupe de Recherche d’Art Visuel actually painted all the patterns before I did—all the basic designs that are in my painting—not the way I did it, but you can find the schemes of the sketches I made for my own paintings in work by Vasarely and that group in France over the last seven or eight years. I didn’t even know about it, and in spite of the fact that they used those ideas, those basic schemes, it still doesn’t have anything to do with my painting. I find all that European geometric painting—sort of post-Max Bill school—a kind of curiosity—very dreary.”