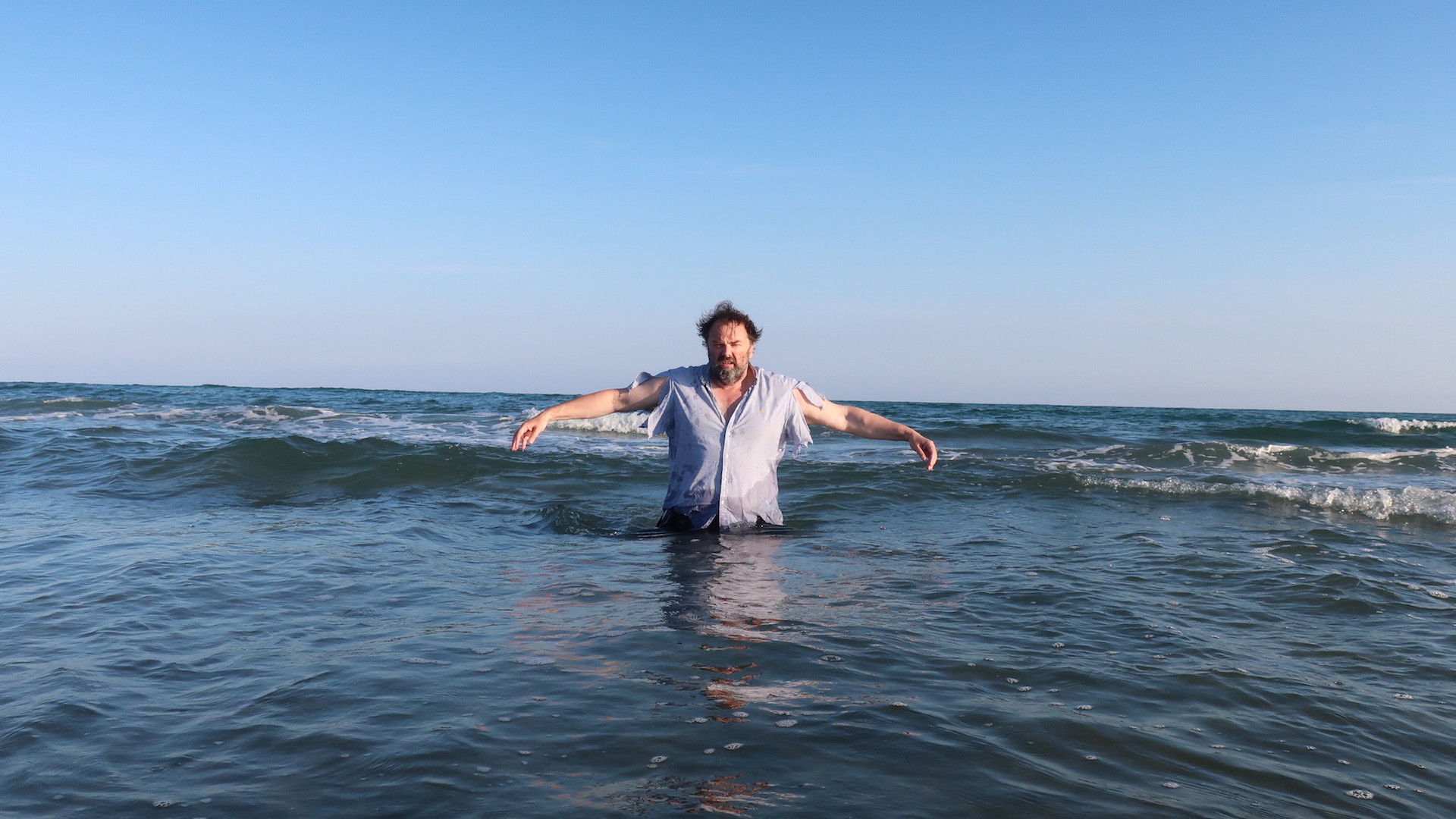 Hair tousled, facing the camera slightly dazzled, arms outstretched as crucified (soft version), immersed to the waist in a slightly rough sea, his blue shirt shredded, like a shipwrecked man; this is how François Curlet appears on the poster of the retrospective “Crésus et Crusoé” dedicated to him by the Mac’s in Grand-Hornu. If the sound of their names brings them closer together, these two characters summon images that are diametrically opposed: wealth for one and idleness for the other. François Curlet is familiar with this type of oxymoron, often through the contradictory association of materials and images, such as these crowbars fused together to form a black spider web (Pied-de-biche d’araignée [Spider crowbar]), or how the fragile would take his revenge by breaking and entering. This is also the case for the iconic Jaguar hybridised with the back of a hearse (Speed Limit),1 a reworking of Hal Ashby Harold & Maude‘s film, and exhibited at the Palais de Tokyo in 2013, which thus combines a way to die with the vehicle for the ultimate journey. Like this funeral car, the humor, often dark, marks François Curlet’s work. How can you doubt it in front of Moonboot, a piece of tibia poking out of a ceramic snow boot, a morbid and cartoon-like remnant of a skier after the melting of an avalanche?

Curlet’s associations of ideas are conveyed by the titles of the works themselves, based on contractions and/or puns, sometimes poetic: Chaquarium, Gogolf, Wu-Tanga, Homeless is more, Just donuts, etc., when this humour and poetry are not displayed directly in bright diodes on a pedestrian sign, in one of the artist’s most famous works that the Mac’s displays at the start of the exhibition: Moonwalk. Here he opposes the usual walk/don’t walk injunctions with a sidestep, or rather a step backward, like the king of pop. In an ultra-regulated world, you might as well step out of line. The same spirit of rebellion was already present in a 1996 work entitled NON [NO], in response to a Rank-Xerox ad that said, in an imperative tone, “Reduce your documents”, while Curlet did the opposite. Spirit of contradiction, forever.

François Curlet’s art also has to do with the diversion2 of everyday objects or signs whose meaning he reverses, such as the McDonald’s logo which becomes a Gallic bard’s lyre once turned over (MilDo); a work created in response to the action carried out by militant farmers in an establishment of the fast-food giant in Millau, including José Bové, a French alter-globalist who now shares with Cacofonix moustache and instrument. Diversion or misuse, if we are to believe the many objects whose use by Curlet takes them away from their basic function, such as Le taille-pipe crayon,3 a slighlty coarse French play on words that associates the chrome-plated elegance of a pipe to an actual pencil sharpener. The same goes for the brown plastic club, an accessory for Flintstone disguise, which becomes a coca-cola bottle. The minds of two Jacques, Carelman and Tati, hover strongly above this type of surrealist objects that could have appeared alongside the bald man’s comb or the briefs-tie, among other inventions from the brilliant Catalogue of Unfindable Objects or among those of the Salon des arts ménagers in Playtime. It was on the occasion of the 2014 Rennes Biennale, which bore the title of this film, that François Curlet was finally able to produce his miniature golf course, entitled Gogolf Echelle 1, a draft of which had been shown at the Galerie Commune in Tourcoing and a model of which had later been shown at the Chapelle du Gêneteil in Château-Gontier : a golf course designed by artists invited by Curlet (among others: Denicolai & Provoost, Michel François, Hugues Reip, Florence Doléac, Pierre Huyghe, Emilio Lopez-Menchero…) around the idea of impeding the golfer’s success.

Mistaking something for something else, misusing it, or using false pretenses: Curlet’s works are tinted with a grotesque, burlesque dimension and dig holes in reality. There is always a twist, a reversal of the gaze that takes place (often when the title is discovered opposite the work), leading us to consider the work from a different angle and pushing towards a new interpretation of the whole, just like the giant toast on which a yellow motorcycle lies, whose hidden side we must see to discover the yellow oil that escapes from it and then seize the play on words of the title, Toast cannibale [Cannibal Toast].

In what world do we live? Through a certain number of pieces (with the exception of the rather formalist series of Frozen Feng Shui), François Curlet provides elements of a critical response. It is interesting to see how some of the works of the 1990s can still resonate today in a world of hypervisibility, such as La Vitrine created in 1992, which forces visitors wishing to see through the magnifying glass located at eye level to expose their intimate area, resulting in the double movement of voyeurism/exhibitionism, or the intrusion into people’s private lives, whether consented to or not, raised by the series of X-Ray sculptures, moulded glass suitcases containing intimate objects as they appear on the airport control screen. This transparent whole also gave rise to one of Curlet’s emblematic pieces, Chaquarium [Catank]. This bleak diorama, without water but with bubbles, which shelters behind a glass pane a real Persian cat (fed and watered, let’s calm down), having for only company a giant aquarium coral and a Cococat, a coconut-shaped refuge sculpture (that Curlet also declined for humans), reverses the roles between aquatic prey and hairy predator, for a pathetic and funny spectacle. In the parallel world of social networks, immateriality and flow make you want hard facts, such as a facebook page made of mosaic tiles with a real poster that you can like (Facebookie); the same goes for the world of trends and advertising, of logos and brands, with the Vintage Discounters series that displays the logos of discount brands reproduced in formica taken from tables purchased at the Salvation Army. Curlet is a disillusionist, he acts as a true cynical antidote, a pair of Invasion Los Angeles glasses on his own. His dream catchers catch hardly any more than scraps, pieces of trivial packaging of chewing gum, biscuits or medicines (Trash-Catchers). Even the white cube is ultimately just a packet of cookies, with its red triangle-shaped logo placed in the corner of a wall (Nabisco), so as not to forget that the art centre or museum is a commercial product like any other.

François Curlet creates with the poetry of despair. And humor, of course. In an episode of Wacky Races, Hanna & Barbera’s American animation series, the mustachioed aviator Dick Dastardly, obsessed with capturing a homing pigeon, falls into the void at full speed after being weighted by a piano. Muttley, his co-pilot dog known for his mischievous, wheezing laughter, then positions his plane at his height, supposedly to save him. Instead, Muttley settles down and plays the piano. Because “slow and steady wins the death”.4 It is under the hilarious features of Muttley that we imagine the artist, and we challenge anyone not to end up laughing with him.

1 In 2015, a black and white bookcovering the manufacturing stages of this Jaguar-hearse was published by Berline-Hubert-Vortex & Cyrille Putman. The hybrid car also appears in Curlet’s short film, Jonathan Livngstone, featuring a boogeyman in tailcoat lost in the countryside, obviously a fan of Tai Chi.

2 At the very end of the Crésus & Crusoé catalogue, François Curlet explains the origin of his passion for the diversion of objects: “At the age of 10, I discovered contemporary works made with ready-made, collages and diversions, the possibility of debunking things that seemed closed and impeccable in our daily lives”.

4 One of the many texts sent by François Curlet between 2001 and 2011 to “officially appointed recipients”, gathered in an edition entitled Short Messages Service, Black Jack Editions, p. 60.