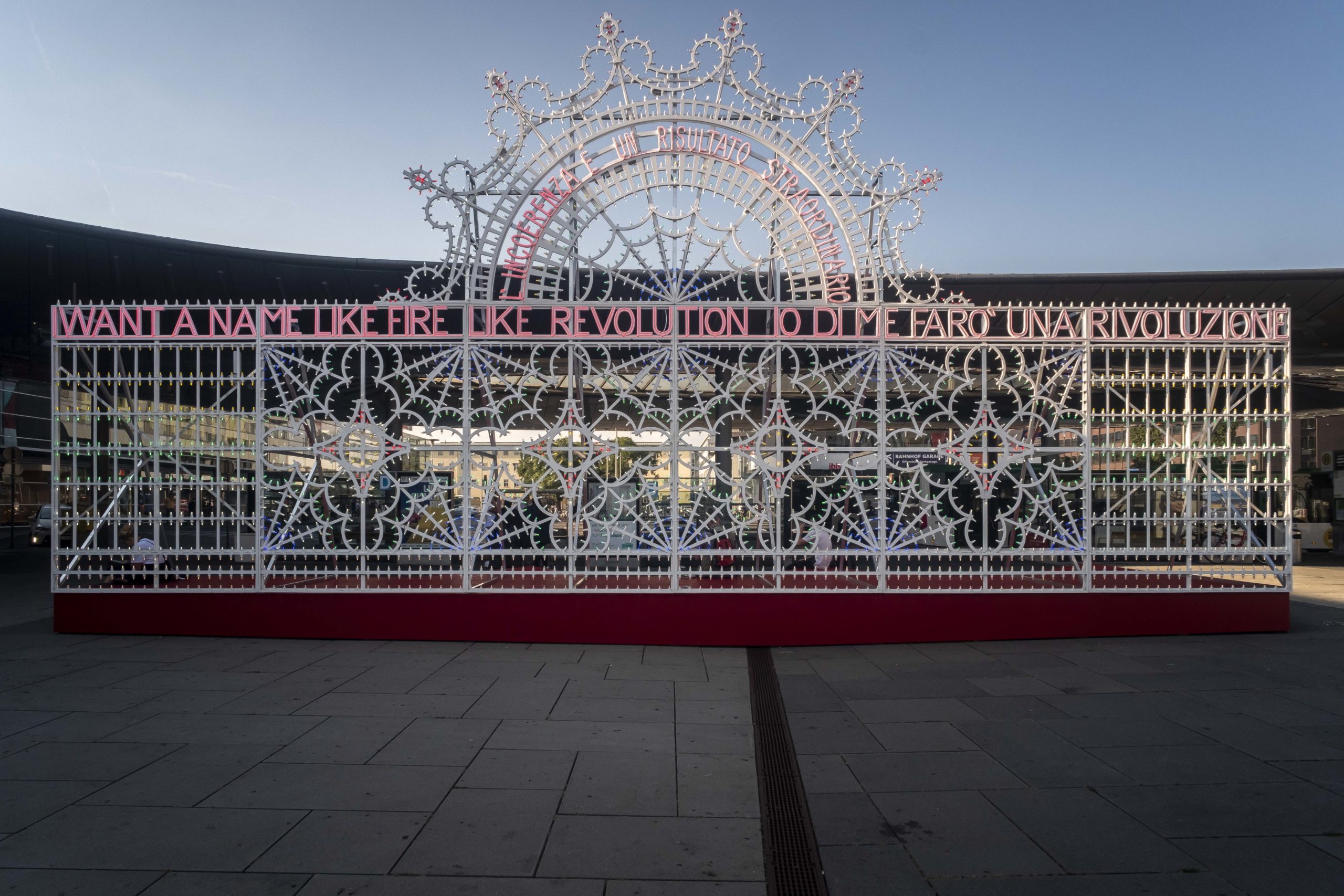 With an emphasis on performative and participative projects and numerous new productions, the fifty-fourth edition of the Steirisher Herbst (Graz’s autumn festival) is a reuniting with the outdoors, the shared and common space. During the global pandemic crisis last year, the programme had to be reconsidered.1 The need to go outside was thus overwhelming. Explicitly titled “The Way Out,” the event intended to rediscover the public space which was always a privileged place of the meeting, exchange, space, agora. Finally going outside in favour of this opening to world and its promises is a purely political gesture.

Renewing the tradition, a series of posters entrusted to ten artists expressing their way of responding to this “way out” gives rhythm to the city. If it seeks a way out to the outside world, the festival also explores other metaphorical ways out in a context of crisis while the pandemic is still active. “We are focusing on simple access conditions that enable chance encounters with art and culture, for instance while strolling through the park, on the way to the station, while shopping in Herrengasse, or in many other public spaces that “The Way Out” lets you experience as art spaces”2

Tino Seghal responded to the festival’s proposal over the course of the first week by occupying the Augarten and Stadtpark parks from sunrise to sunset. The British artist living in Berlin has recently left institutional spaces to go out and meet people. Here it is a question of “tweet-tweet” and “meow”, of naps, face-to-face, back-to-back, songs and vocalizations, onomatopoeias. Neither installation nor performance, this “constructed situation” as the artist calls his works blurs the boundary between art and reality by mixing forty performers with park visitors in interactions.

Thomas Hirschhorn chose to install a spontaneous and popular monument in an old commercial, multicultural and immigration district, more precisely on the well-named Esperantoplatz, paying homage to the life and ideas of philosopher Simone Weil. As usual, the Swiss artist initiated the project and then let the inhabitants of the neighbourhood take ownership of it.3 By including them in the process of its evolution, he incorporated the monument into the daily life of the suburb.

Marinella Senatore placed her work Assembly in front of Graz’s central train station, making it the gateway to the city but also to the festival and the themes it addresses. The Italian artist whose work focuses on social and urban issues brings together folklore and social criticism in her installations inspired by baroque decorations of traditional neon signs, which she reinterprets by incorporating slogans and poetic-political quotes. “Text is important in my work and I strongly believe that poetry can be a revolutionary tool of resistance,” she says.4

Flo Kasearu humourously addresses the issue of security in public space in her performance Disorder patrol. The Estonian artist– who has converted her home in Riga into a “house museum”– has taken an interest in the parks of Graz, which are patrolled by the police, private security companies and the Ordnungswache­, a city council’s neighbourhood watch unit. Dressed in uniforms and wearing oversized headgear, twelve performers– some on horseback, others wielding gymnastics ribbons– inject a touch of absurdity into everyday reality, blurring the image of the forces of law and order, briefly becoming peacekeepers again.

Since 2013, Austrian-Serbian artist Dejan Kaludjerovic has been interviewing children between the ages of six and ten from all social and ethnic backgrounds about the state of the world in the series Conversations, then introducing these recorded interviews into sound installations. Here, he produced his first opera– in collaboration with Marija Balubdžić, Bojan Djordjev, and Tanja Šljivar– based on the responses of the children from Graz, where he had been in residency all summer. Paced by pop, house and burlesque sounds, Conversations: I don’t know that word … yet is performed by four very sleek adults– Zoja Borovčanin, Lisa Cristelli, Christoph Gerhardus and Sebastian Hiti, all formidable– coming from different musical fields. Delightfully incongruous, wonderfully delightful, the piece is, along with Flo Kasearu’s Patrol, one of the highlights of the festival.

Simultaneously a concert and danced performance, Uriel Barthélémi’s Navigating the ruins of the old world concluded the opening night. Black, white, Asian body, vacuum packed body, plasticised, suffocated, fragile, always at the limit, woman’s body, man’s body in apnoea in the ruins of the world, asphyxiated by a sea of plastic, bodies that brush against each other, that embrace each other, that look for each other to the magnetic rhythm of electronic music. Human’s selfish unconsciousness announces a prehistory to come in the twilight sky of Graz. The circle is omnipresent. Like Atlases, the dancers carry the world. They convulse, tremble, drunk with fatigue, return to the rubble. On the heap of ruins, they improvise sounds from what remains. The cries, incantations, rales, fade away in front of the promise of dawn.

Five weeks away from the institutional bubble. After the 2020 edition was constrained by the Coronavirus pandemic, The Steirisher Herbst found what makes its essence: the real, the daily, the popular, as a playground. “The Way Out”invites to “experience art outside its rigid framework.”5 To enter the public space and accept taking risks that that entails is a political act in and of itself.