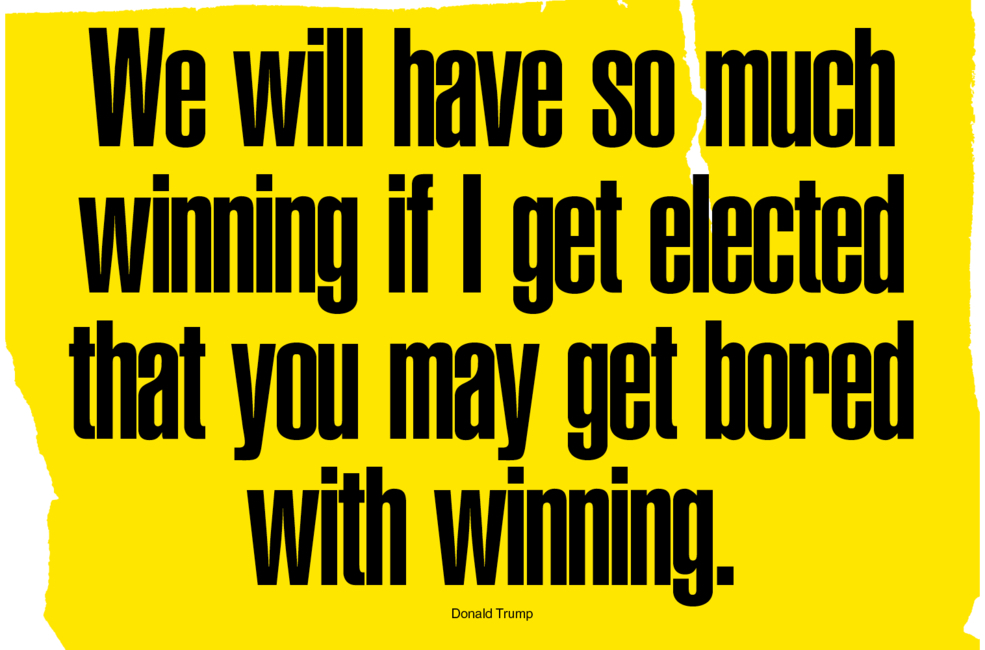 It is rare for reality to be invited to take part in the artistic debate in such an unexpected way, relativizing and/or going along with curatorial proposals which have to do with something so extremely topical. After visiting the exhibition “Political Populism” at the Kunsthalle, as I tried to get back to downtown Vienna, I was suddenly halted in my tracks by a mighty cordon formed by the “forces of law and order”, their aim being to limit the risk of clashes with opponents of the annual ball being held by the far-right Austrian party, the FPÖ. If you think about it a bit, the argument regularly put forward in support of the maintenance of law and order takes on a somewhat surrealist aspect, if you start looking at “order” in its usual definition, which involves keeping things the way they are, such as, for example, the possibility of returning safely to your lodgings. The Surrealists, incidentally, would definitely have described my unexpected encounter as objective chance. The thoughts brought on by the appearance of that unforeseen obstacle were all the more encompassing because my mind was focused on one of the pieces in the exhibition, involving a demonstration “arranged” and performed during the latest Moscow Biennial: in Anna Jermolaewa’s Political Extras, babushkas or ‘grannies’ are anxious to know if their participation in the demo will indeed be remunerated as had been agreed. In a kind of crazy short-circuit, I wondered if that police episode that I had just experienced had not also been programmed as part of the exhibition, and if the “extras” had not all been paid by the Kunsthalle… That “piece”, which found its way of its own accord into my thoughts, had me repeatedly raising the issue of the scope of thematic shows which grapple with major social subjects such as populism, at the risk of being overtaken by reality. Anna Jermolaewa’s video, which echoed strangely with that intrusion of reality, to such a degree that it started to make me have doubts about its consistency, pinpoints the inclination of politicians and leaders in the making to present and organize, and also manipulate so-called “spontaneous” demonstrations—mechanisms, it just so happens, which lie at the heart of the concept proposed by Nicolaus Schafhausen, the curator of “Political Populism”. 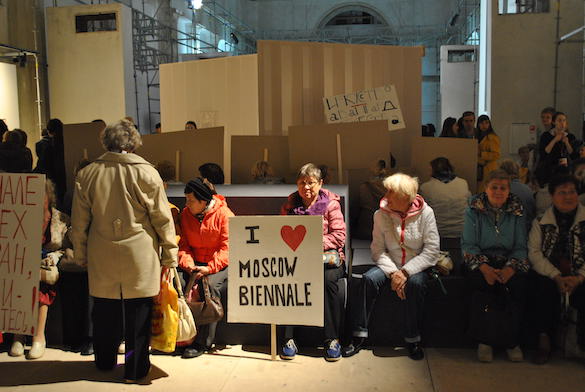 In the exhibition’s brief statement, however, the precautions taken to dodge any form of thematic definition are quite striking: the curator has in no way sought to tighten his ideas in one direction or another, be it that of denunciation, didacticism or prophylaxis… This stance, or absence thereof, explains how, with just a few rare exceptions, like that of the above-mentioned video or Christian Falsnaes’s opening performance, the works on view seem far removed from any centripetal concept. Falsnaes tries to reproduce and shed light on the training phenomena which are a prelude to populist support: eloquence, persuasion, charisma of the character. The Danish artist’s performance reminds us that populism is also based on instinctive mechanisms, where the leader’s seductiveness plays a major part in the adoption of imitative collective behaviour. The abandonment of the rational arguments associated with the loss of confidence of the middle and working classes in the capacity of classical policies to find solutions to the issues causing them anxiety (unemployment, insecurity, national loss of influence, “migratory submersion”) and the recycling of these themes by extremist movements is not more widely used than that. It is actually very interesting to advocate an approach which is not scaled down to an analysis of the socio-economic basics of populism, and to want to spread it to a much broader anthropological attraction: from this angle, many pieces in the show are thoroughly justified, whereas they would be less so in a more accusatory or more militant exhibition. 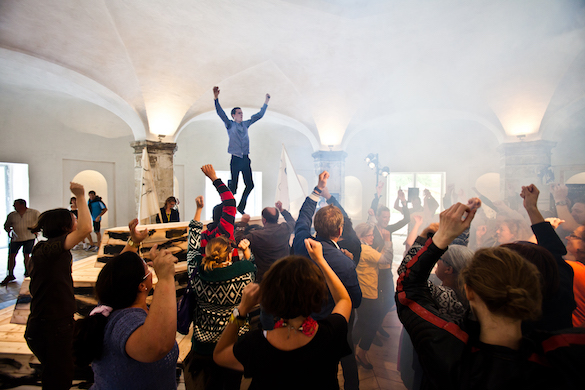 Hito Steyerl’s installation (Factory of the Sun, 2015), in its allegory of the extreme fluidity of capital and information, height of the ‘big data’ concept understood as the final stage of neo-liberalism, links up with Simon Denny’s work (Secret Power Highlighted, 2015), in a common denunciation of abstruse mechanisms, the mastery of which largely eludes populations more and more disconnected from decision-making hubs, who are under the impression of having less and less of a hold over their fate. If such works do not deal directly with populism, they do highlight the fact that this latter stems from many different and distant causes, which it would be absurd to want to reduce just to their economic relevance (even if the choice of these artists is slightly remote-controlled, Steyerl and Denny being both nothing if not widely exhibited, cornering every event of any importance, from Madrid to New York, after having been the stars of the last Venice Biennale); Trevor Paglen’s piece (Landscape 89, 2015) shows us the National Security Agency’s (NSA) headquarters filmed in a kind of romantic fog which brings out the place’s mysterious side. This video shares in a diffused feeling of opinion manipulation by organizations with vague outlines, and impossible to locate, by a United States recently reviled for massive and shameless spying on populations prevented from being able to oppose these clear assaults on any form of legal protection: somewhere between pamphlet, documentary and a Brian De Palma-like atmosphere, Landscape 89 lays out the emergence of paranoia within societies that are more and more accommodating of forms of conspiracy-theory discourse—which, it must be admitted, are not always unfounded. Paglen manages to play very well indeed with this dimension of untouchability and impunity of “Empire” which can in fact be reproached for fuelling a certain type of populism, the type that reverts to nationalistic components. 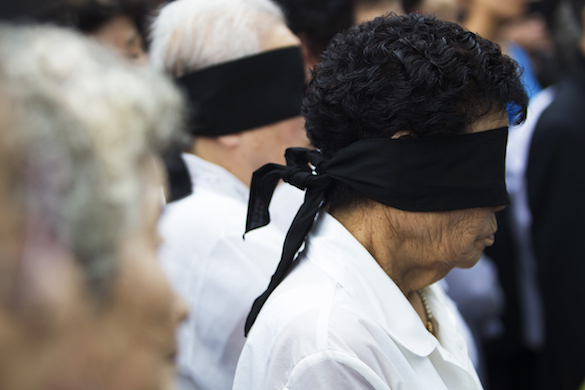 The fact remains that certain works leave one puzzled about the link they have with the theme: for example, how do we connect Keren Cytter’s Metamorphosis (2015) to it, or Ahmet Ögüt’s Anti Debt Monolith (2014)? Here the link seems truly overstretched… Other pieces, on the other hand, like Erik van Lieshout’s, plunge straight into the reality of complex political situations. The video Dog (2015) takes us to the heart of the discussions of a group of human rights activists keen to celebrate the memory of Alexander Dolmatov, a Russian scientist and political militant who committed suicide when his request for asylum was turned down. The Dutch artist’s installation, in the form of a forum, clearly invites onlookers to become steeped in political issues by making them gauge the consequences of the decisions to be taken, artistic action itself being seen as an effective response with, as a reference, Oleg Kulik’s cult piece which sees this latter turned into a dog on a leash (I Bite America and America Bites Me, 1997). Minouk Lim’s Navigation ID (2014) is also part of this much more realistic vein with its target being the attitude of governments which baulk when it comes to admitting the tragic mistakes of their predecessors. With this installation, Lim pinpoints a by-default dimension of populism, which is the way it sidesteps the exhumation of embarrassing episodes, so as to preserve just the good side of history.

Last of all, Saâdane Afif’s Shoiße (the equivalent of the Ubuesque merdre or ‘shrit’) aptly shows that populism is not a new phenomenon, and that it re-appears regularly through fictional characters such as Jarry’s Ubu, who represents one of its most caricatural figures. Marcel Odenbach, better known for his work as a video-maker, also reminds us that, like the spare design of German cars with their doctored performances, populism advances wearing a mask: all the collages on view here seem like the metaphor of the duality of peoples, emphasizing the symbols of their industrial and commercial success, the better to hide deleterious impulses which are buried but always ready to re-emerge… Odenbach puts the blame in particular on the German people which he belongs to, to shed light on a loaded history whose paint is cracking beneath the enlargements of details which make up the series Symbols (Deutsches symbols/VW; Bundesbank; Deutsches Bank, etc, 1994), forcing us to re-question history in order to draw the necessary lessons from it. 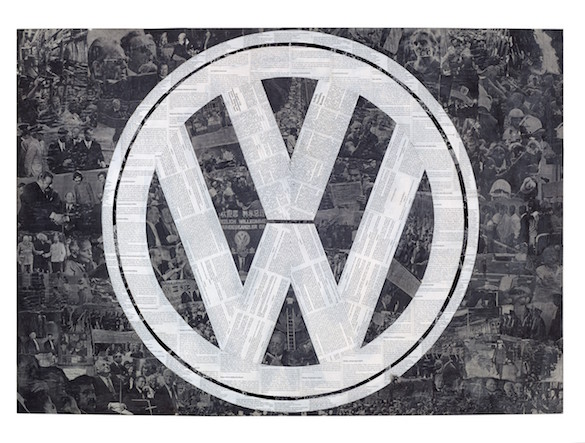