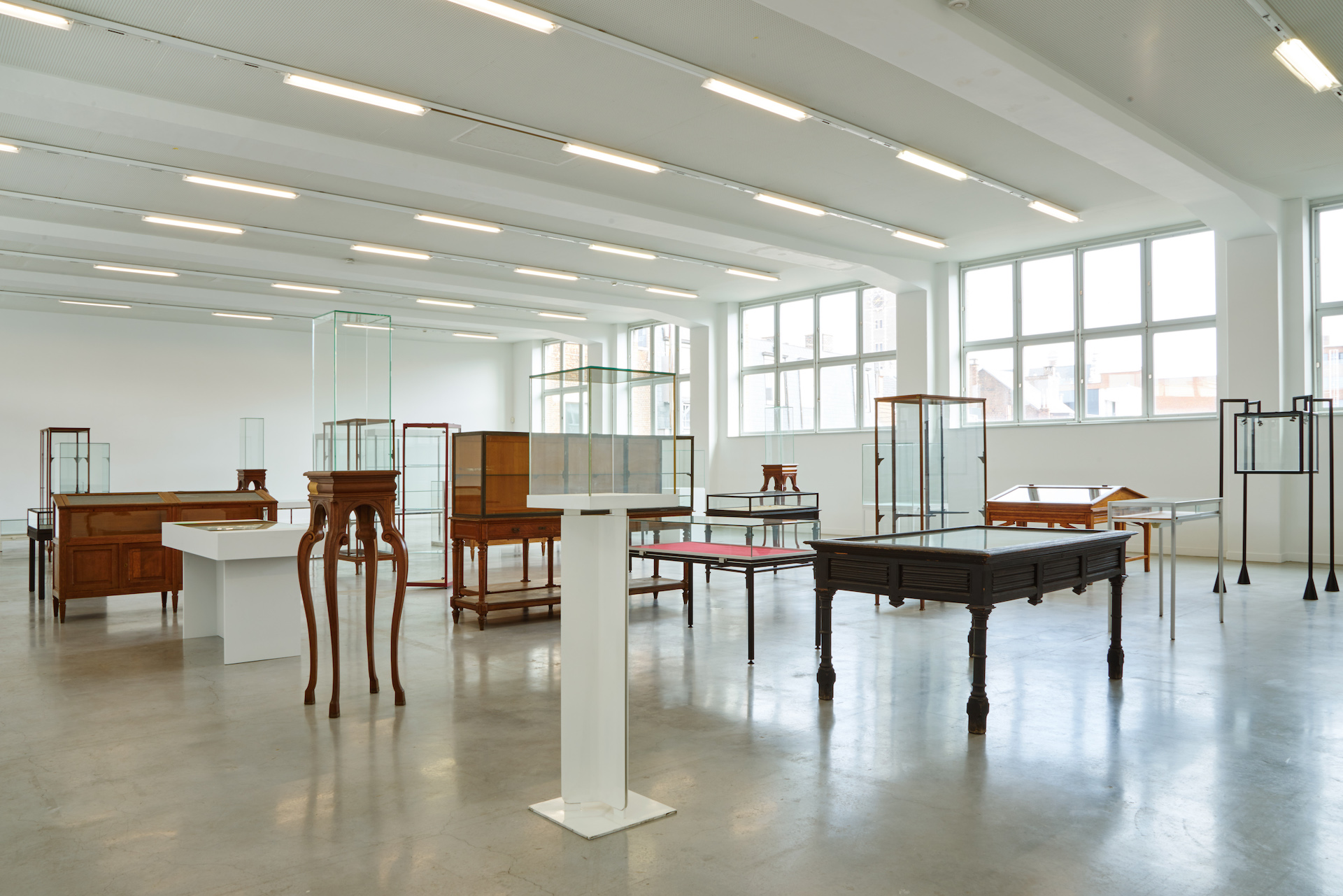 Where Oriol Vilanova’s work is concerned, we are mainly acquainted with his incredible collection of postcards, put together over these past fifteen years, and boasting thousands of specimens with very disparate origins and from very diverse periods. This collection, which the artist adds to on an almost daily basis, in particular by visiting Brussels’s many flea-markets, and which represents the foundation of his art praxis, is nevertheless just the starting point of a much wider and more ambitious line of thinking which, in a nutshell, focuses on the paradoxes inherent to mass culture, with a specific interest in themes such as immortality, relations between time, memory and history, ancient icons, and the re-writing of the past. Oriol Vilanova thus raises questions about the way in which our viewpoint can be oriented, with certain images and works managing to catch us. He also turns out to be particularly attentive to the process of developing a narrative framework, and a mise-en-scène-like presentation—be it for a performance, a stage play, or objects and works of art. He thus pounced on the opportunity offered by an invitation from the M Museum to work out an idea that is as critical of as it is instructive about the part played by museums in the way our manner of looking at things is formed. By appropriating different exhibition ingredients –whether this involves display cases, the components of sets, or by-products–, he comes up with thoughts about presentation and artifice, what we are presented with and what is hidden from us, and, more generally, what today’s museum institution represents. If these issues have lain at the heart of the artist’s work for many years—as, for example, in his performance Goodbye, produced by the FRAC Champagne-Ardenne in 2012, which was organized around a Hubert Robert painting depicting the Louvre Museum in ruins—, this is the first time that this line of thinking has been developed with such scope. The first of the three installations on view, Without Distinction (2016), consists in bringing together 35 display cases and stands coming from different Belgian cultural institutions—ranging from the famous Royal Museum for Central Africa to the Royal Museum of Fine Arts, both located in Brussels, by way of the De Singel international art campus in Antwerp and the Maison des Arts in Schaerbeek. Precisely where these scenographic components are, as a rule, bound to be as discreet as possible, here they are relieved of any work or object, and simply shown for what they are. In addition to the overall and extremely spectacular impression due to the sheer number of display cases brought together, what exercises us is the way in which each one of them manages to conjure up a parallel history of the exhibition, and thus emphasize the impossibility of neutrality where this kind of furnishing is concerned—be it because of the stands’ shapes, colours and materials used, and even at times the marks left actually inside the stands. 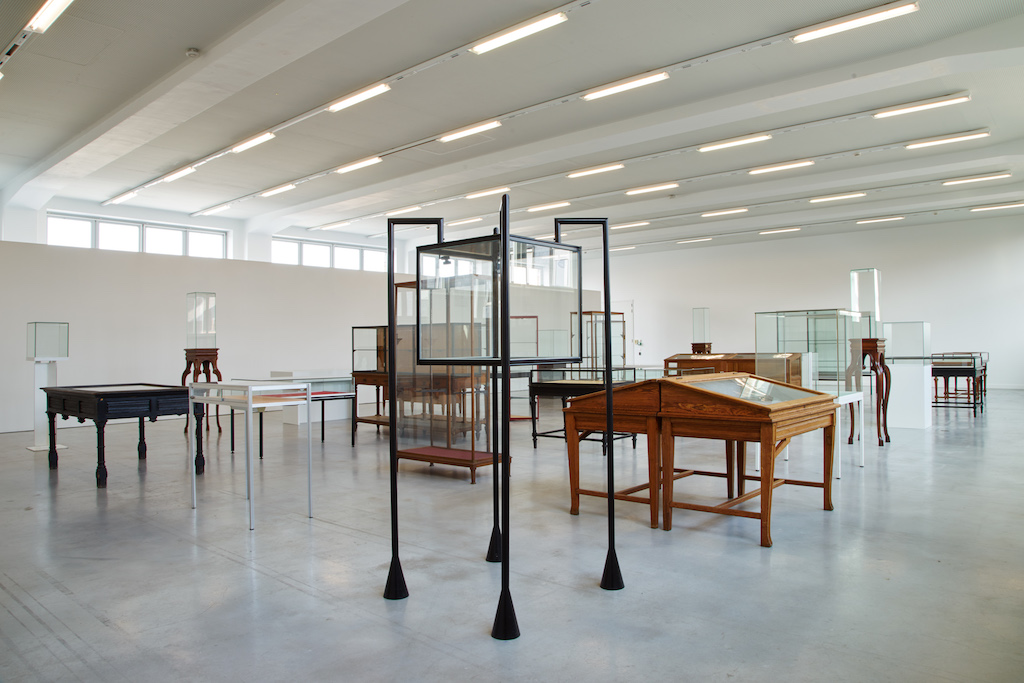 The second installation, titled Voilà (2016), carries on the thinking embarked upon by the artist about this dichotomy between display and disappearance. It is made up of a semi-circular white wall, placed in a corridor, which you can quite easily walk past without noticing. Nevertheless, if you get a little closer to it, a slight space appears which suggests that a work has been placed behind this wall, though it remains unfortunately inaccessible to us. Like the first installation above-mentioned, this one plays with absence, the better to reveal the indescribable and attract our attention. If the procedure used by Oriol Vilanova in the last of the three installations is quite different, the issues raised are similar, all the same: to what extent does a set or a presentation steer our perception of an exhibition? Do these presentational decisions reveal underlying power structures? Anything, everything (2015-) is made up of 2,800 postcards—all coming from the artist’s own collection—depicting works of art and objects made by craftspeople. Among the countless possibilities of presenting such an ensemble, Oriol Vilanova has this time opted for a display based on the background colours of the pictures, which causes the objects depicted to totally disappear, in favour of a chromatic organization. By the same token, he totally does away with the effect sought by this presentation, namely the enhancement of the object photographed, and, through their abundance and saturation, highlights procedures and mechanisms which usually remain invisible. We are thus reminded of the exhibition’s title, “At First Sight”, inviting everyone to wonder about what they are being shown. By thus seeking to reveal what is usually underlying, hidden, or even invisible, Oriol Vilanova considerably alters our spectator’s viewpoint, and prompts us to adopt a “metaposition” and cast a more removed eye over the act of exhibiting but also over the fact of visiting an exhibition, and he also urges us to get beyond appearances. 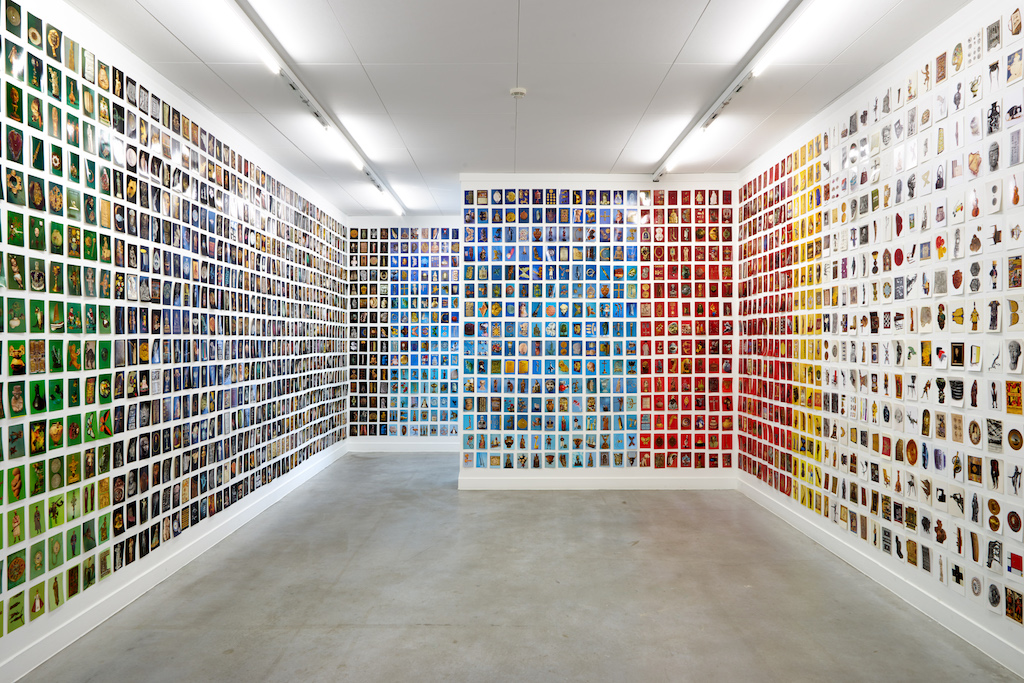