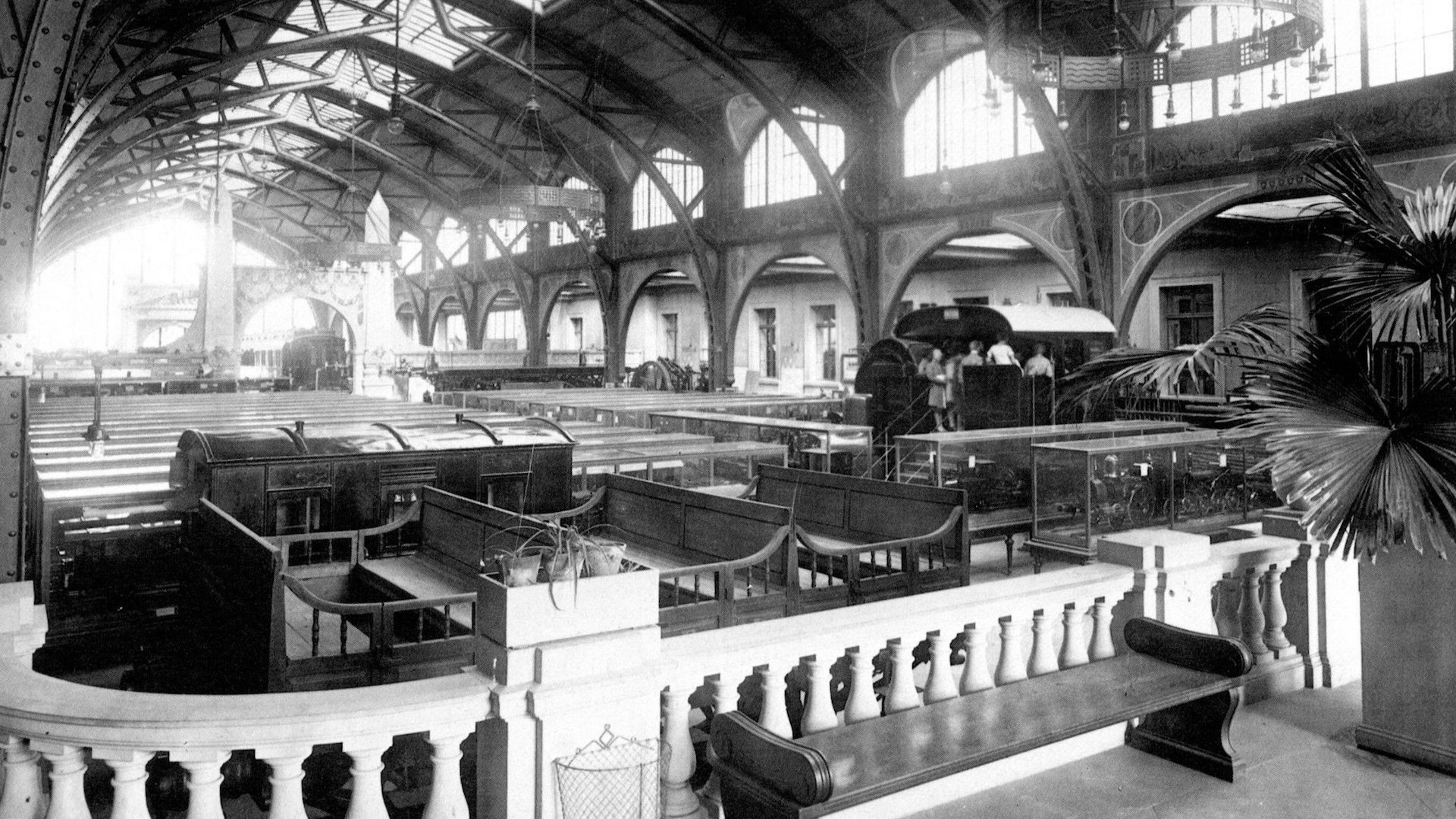 “Some people say that an artist should be capable of expressing his or her inner self, but I tend to think that real talent involves being capable of taking a back seat and letting the hand, stone, glacier and pencil tell their own stories.”1

Initially, we are confused when we stroll around in the large hall of the Hamburger Bahnhof where Mariana Castillo Deball’s exhibition “Parergon” is on view. Facing us is a collection of objects that is far too eclectic to enable us to identify the whys and wherefores of this assemblage. So a 19th century Ottoman painting faces a death mask, while a wheelchair chats with a modernist bronze sculpture.

An expert may nevertheless recognize certain famous pieces from Berlin collections. In particular Otto Baum’s Stehendes Mädchen [Standing Girl], and a ghostlike reproduction of the façade of the Mshatta Palace held in the city’s Pergamon Museum. In the end, all the objects brought together or produced by Mariana Castillo Deball come from or make reference to institutions in the German capital; the context of the exhibition itself helps us to understand this choice: in 2013, the Mexican artist, currently based in Berlin, won the important ‘Preis der Nationalgalerie’, which enabled her to create an exhibition in one of the city’s national museums, as well as produce a monographic publication.2 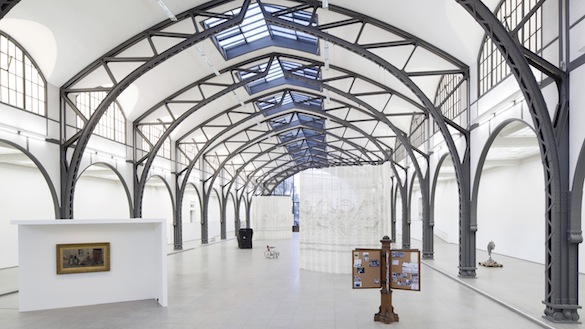 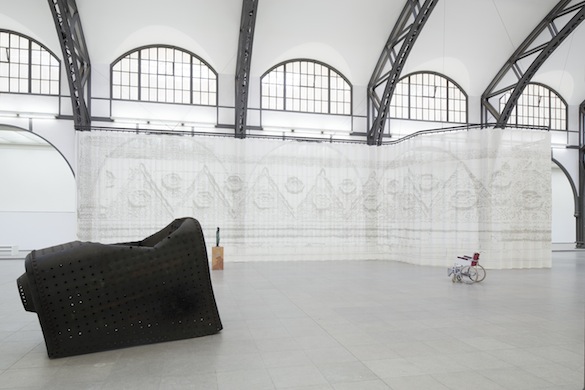 The artist, who declares a preference for museum reserves rather than museums themselves, thus refuses to concentrate on any one institution, or use the budget earmarked for her to produce new works which will then be introduced into market circuits. In a radical gesture, she adopts a more self-effacing stance, setting herself up as the co-author of objects that she will select in the various collections, thus constructing a fragmented reflection of these institutions.

At first, her presence is hard to identify in the venue, between the borrowed works, the copies she has made of them, and the more “fanciful” works, but in the end it emerges in what usually represents the “asides” of an exhibition (so much so that we can walk right past it), which is to say the mediation apparatus formed by the exhibition journal and the audioguide. Mariana Castillo Deball stages the exhibition in its entirety: the objects on view, as well as the paratext, through the displacement of these latter. It is precisely right here, the place of the parergon, an ancient Greek term meaning a “supplement”, or something secondary to an object.3

This complement, which is usually an “aside” or “secondary feature”, is here the very gesture of the artist, who takes discourse as the sole strategy.

The text, be it written4 or read (the audioguide) (dis-)places the different objects like tangible media, not to say protagonists, of numerous stories which take us from the “captures” of archaeological vestiges at the end of the 19th century to the rediscovery of Otto Baum’s sculpture in 2010.

All these elements, starting with the Hamburger Bahnhof itself, represent what the artist calls “uncomfortable objects”, which have not accomplished their “destiny”: displaced, destroyed, erased, stolen or rediscovered, undergoing switches in status in relation to the people handling them. Immobile because of their formal condition, and yet paradoxically unstable. 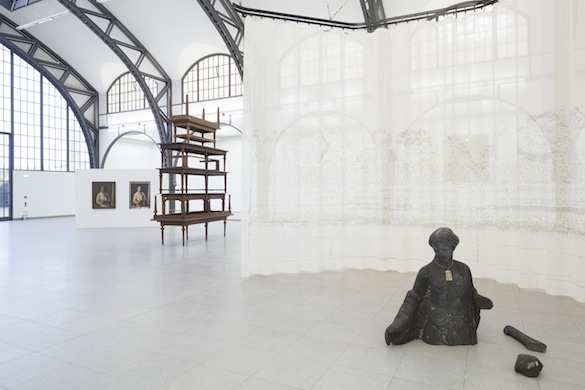 In the face of the profusion of stories revealed in “Parergon”, the Hamburger Bahnhof, which is simultaneously the character, place and set of these narratives, incarnates a highly symbolic example for understanding the artist’s operations. Built in 1847, it was at first a railway station, but was in no time limited, while at the same time unable to deal with the enlargement of railway tracks. In 1906, it then became the royal museum of transport and construction. Severely damaged in 1944, the museum would remain closed for almost 40 years. It was not until 1996 that the Hamburger Bahnhof was rehabilitated as a museum of contemporary art, thus hallmarking, through its very biography, the archetypal “modern ruin”.

In particular, these metamorphoses reveal the different statuses assumed by the objects housed by the building. Wooden panels showing train timetables, which are part of the show, take us to its primary function, while locomotive wheels, old exhibition furniture and other vestiges of industrial technologies, which have now become collectors’ items because of their obsolescence, evoke the museum of transport. These unsettled lives of objects reveal our own patterns of behaviour, what we desire, produce, conserve and destroy. The history of the Hamburger Bahnhof, thus told, produces reverberations with the other pieces present in “Parergon”, railway stations having in fact played a basic part in the discovery, possession and repatriation of archaeological vestiges. In 1904, the German Empire embarked on the construction of the Baghdad railway line, with the aim of directly connecting Berlin to the Ottoman Empire, relations incarnated by the curtain floating across the exhibition, which reproduces the motifs of the south façade of Mshatta Palace. Broken down into 459 pieces, the wall was a “gift” from Abdul Hamid II, sultan of the Ottoman Empire, to Kaiser Wilhelm II, for the construction of the Hedjaz railway line, thus misappropriating the decree of 1884 which guaranteed the title of ownership for the Ottoman Empire of all the antiquities discovered in its territory. That agreement was defended, in particular, by the painter and administrator Osman Hamdi Bey, one of whose pictures—Persian Rug Merchant in the Street (1888)—acquired by the German Empire probably to flatter him and obtain certain dispensations from the decree, is also to be found at the beginning of the exhibition. 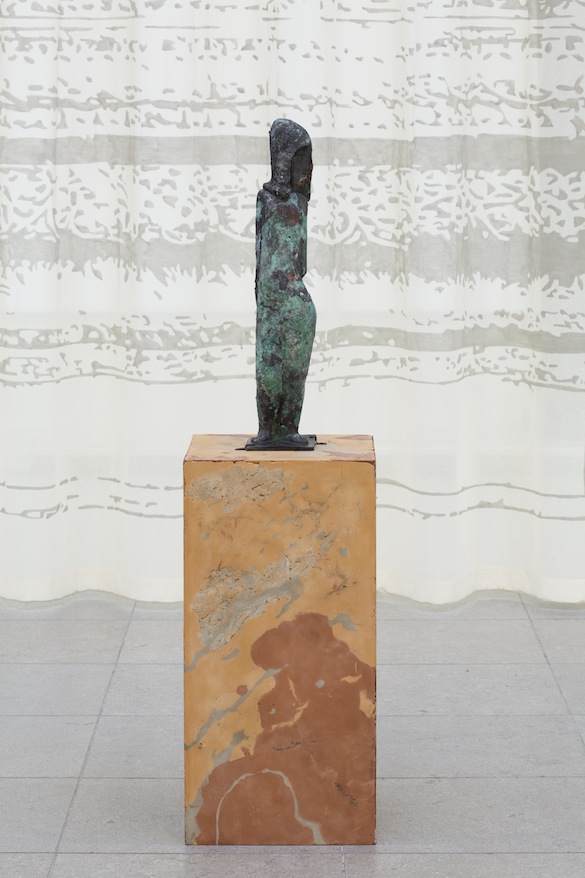 This is, in part, one of the stories told by Mariana Castillo Deball by way of her character-objects. Using storytelling, she produces an augmented and manipulated version of what Jean-Marc Poinsot calls the “authorized narratives”,5 thereby describing discursive constructions attached to the works but which, for all that, are not an intrinsic part of them, like titles, signatures, dates, certificates, attestations, notices, captions, declarations, descriptions, oral comments, etc.6 Here, these latter are the parergon and the artist’s place of expression through a paradigm reversal in relation to the work similar to that advocated by Sergei Tret’iakov in his 1929 essay titled The Biography of the Object: “So it is not the individual who moves through a system formed by objects but rather the object which evolves through a system formed by individuals.”7

The artist’s discursive interventions are only made possible by the shift of objects beyond their context, namely their location in collections: brought together in the quasi-white cube of the Hamburger Bahnhof, they become “shells” to occupy. These narratives attached to objects are part of the memory we have of them, they are at once unstable and stubborn traces of them. Mariana Castillo Deball has continually shown an interest in the memory of objects, which has led her, in an inevitably materialist approach, towards archaeology. From it she borrows its methods and an object approach to the world, and thus to historical construction, while freeing herself from the objectivity called for by this practice. So the presence in “Parergon” of Otto Baum’s sculpture Stehendes Mädchen (1930), which vanished after its presentation in exhibitions of “degenerate art” during the Nazi regime, and was then rediscovered quite by chance during archaeological excavations in 2010, and of the disputed death mask of the German Jewish painter Max Liebermann, made by Arno Breker, a favourite sculptor of the Third Reich, reveals the stigmata of a particularly complex recent history from which certain artefacts have been omitted or, conversely, in which they have been put to use by the ideologies in power 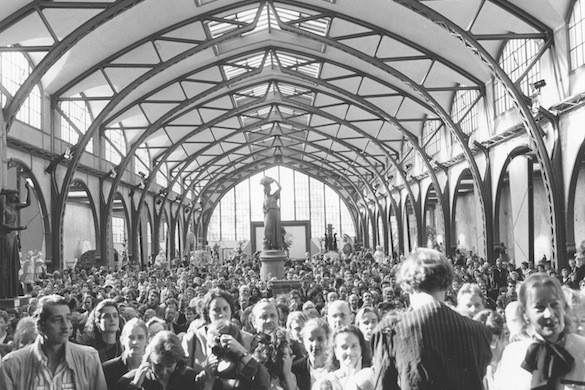 4       The exhibition journal is the second issue of the review founded by the artist, Ixiptla : Journal of Art and Anthropology.

6       “The authorized narratives are second insomuch as they appear after the work, or are dependent upon it during its presentation or representation […]. They are neither independent works nor discourses, but institutional narratives systematically associated with the production of artistic events and services, among which exhibitions play the leading role”. Jean-Marc Poinsot, op.cit., p. 144.