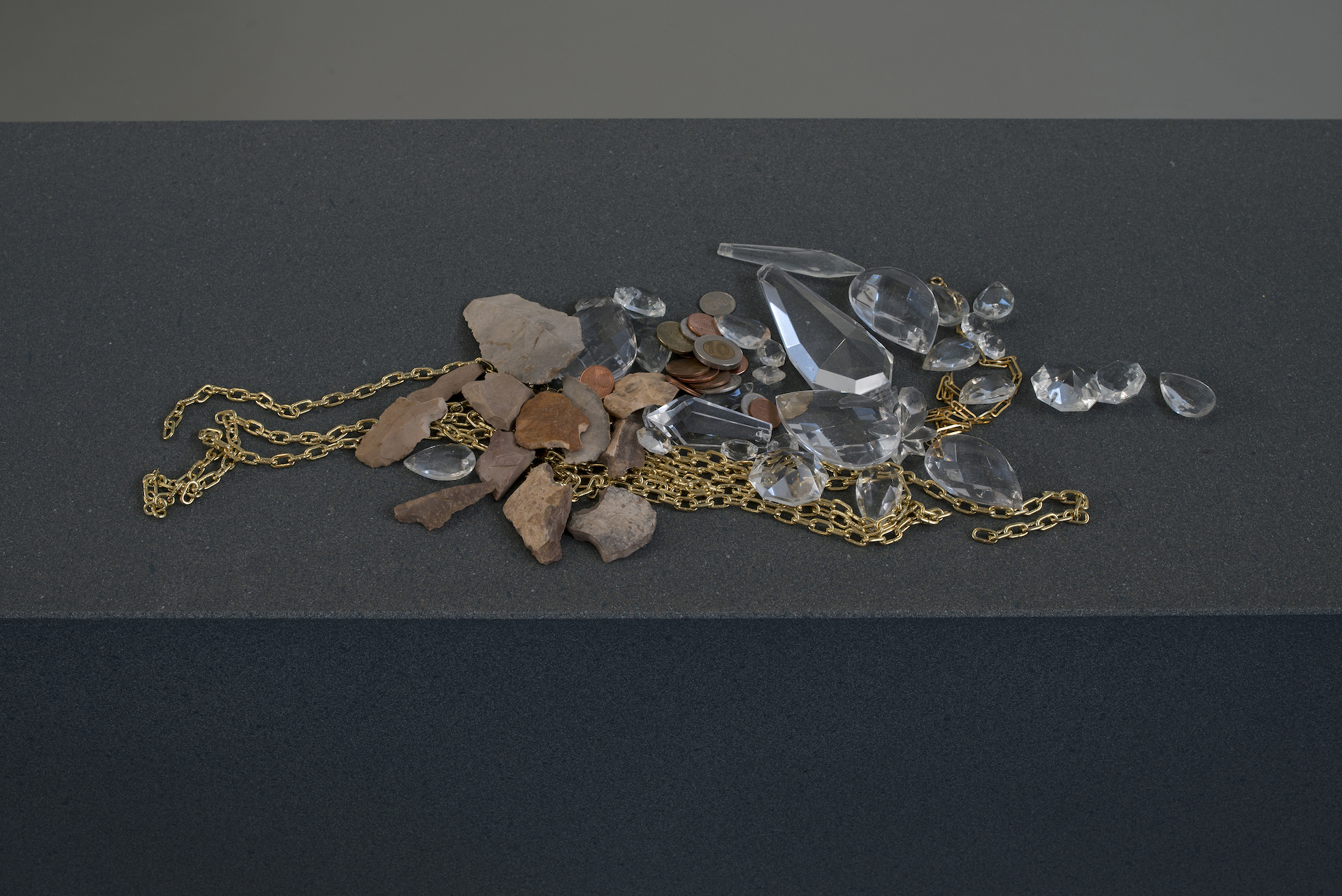 The Isabelle Cornaro show at La Verrière marks the end of the exhibition cycle titled “Gesture, and Thought”, brainchild of the curator Guillaume Désanges. Under the aegis of Duchamp, this cycle has highlighted artists from different generations who, for the most part, include in their praxis a conceptual legacy combined with an interest in manufacture, objects and craftsmanship. 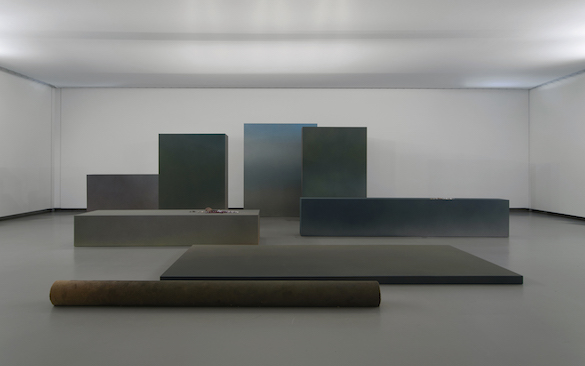 Beneath the historic glass roof located at the back of the Hermès shop, precisely where  regular customers and visitors are usually struck by a light well, Isabelle Cornaro has introduced an upper awning in the guise of a ceiling, which tips the specific nature of the place over into the abstraction of a white cube. She has then arranged a few parallelepipeds in shades of brown, green and blue, organized in such a way as to create the conditions for a perspectival grasp of space, as she managed to do in earlier installations. The exhibition space, which is slightly raised in relation to the rest of the shop, and accessible via a few steps, lends the whole thing the atmosphere of a temple. 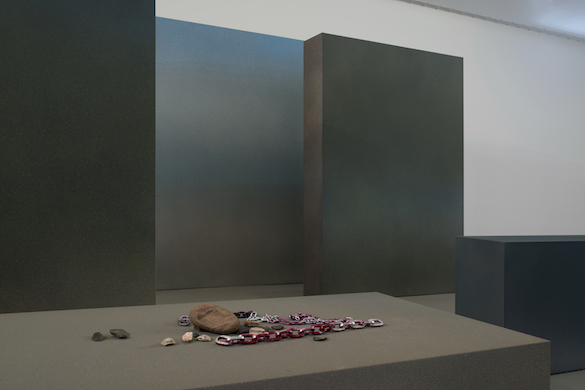 In directly questioning the system of seeing, this arrangement invites people to move their body into what might in fact be nothing more than an image, and solicits from the onlooker a constant interplay of focuses, wavering from the wide angle to its opposite, the tightening of the focus, making the object being looked at veer into a dimension other than the one to which the mind would like to assign it, first time around. So the differing sculptural modules form an overall composition of a pictorial nature, which borrows its interplays of successive planes from Poussin’s painting; the brown, green and blue shades which enliven it also use the gradations of colours used to create depth in classical painting. But these volumes organizing the space in which you can stroll about, as in a sculpture garden, turn out, on closer inspection, to be surfaces for paint: the chromatic modulations of the surfaces join together in the pointillism of a contemporary spray painting which, in its turn, refers to the modern developments of the history of painting, on the way of its essentialist reduction. Arranged here and there, one or two small piles of objects barely visible from afar reveal, when closer, ensembles of carved crystals, coins and metal chains, which might lay claim to their ready-made status if they did not pass for bas-relief sculptures, but whose synthesis forms so many pictorial motifs standing out from the monochrome backgrounds.

Here, Isabelle Cornaro does without the traditional assignation of the techniques of representation to their prescriptive parameters, with the painting here paradoxically proceeding from the volume, and the sculpture collapsing into the plane. This interplay of swings, in which the sculpture contains the painting and so on and so forth, works beneath an eye which focuses in space and follows a vanishing line that also acts as a temporal cursor for reading a history of art which contains, in its core, the actual idea of perspective. Its linear principle knows a single ideological vanishing point, Modernity, which also functions here like an interplay of interlocks, classical systems of representation containing their historical end purpose in the autonomization of the colours and primary forms, which here present, as it were, a final powderiness. 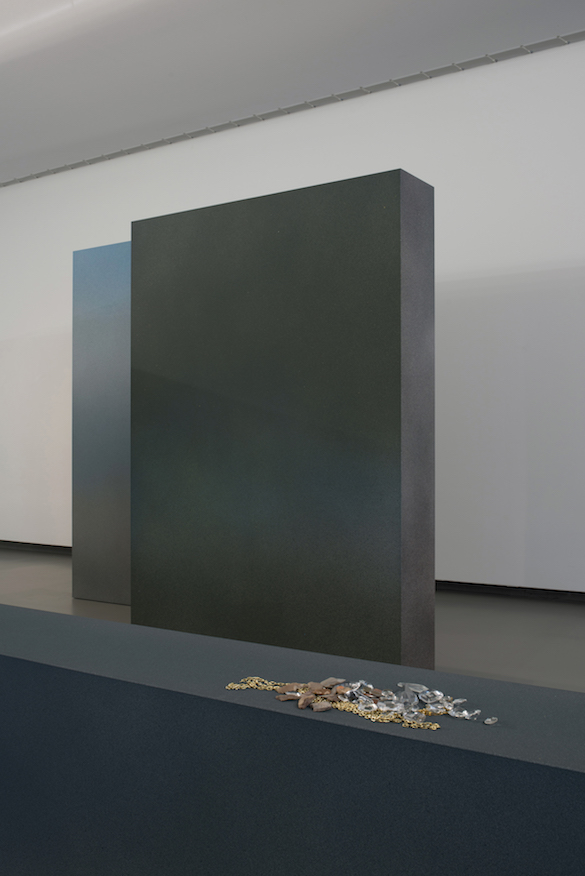 The metaphorical pixellization of the paint recycled by the spray can invites a parellel between the contemporary ubiquitousness of the digital images and the disappearance of the perspectival images that are heirs to classical thinking, each belonging to two systems of “image coding and transfers of abstract elements of reality onto a projection surface”, to use the artist’s own words. By putting the visitor in each one of her installations at the heart of perspectival representational arrangements, Isabelle Cornaro’s intent is to verify the validity of a conceptual approach to the world borrowed from our classical age in its capacity to resound—or reason—with the complexities of the present. But does “this form of symbolic organization of the world”, as she aptly puts it, which carries within it the ethnocentric universalism of the west and its corollary colonial project, make it possible, through its contemporary reiteration, to pinpoint symbolic forces still at work in the present, in order to deconstruct them, or else does it perpetuate symbolic authority? The objects bought in secondhand shops by Isabelle Cornaro, and recycled in her older works, mixed with locks of hair, grandmothers’ charms and other family jewels scatter grand History in the crannies of contemporary individual biographies, by way of a principle of capillarity peculiar to objects. The oriental rugs, Chinese jars, scholars’ rocks and other bazaar-found objects used in some of her installations refer, furthermore, quite clearly to a petit-bourgeois visual consumption of the world. And the sedimentation which is at work in the layers of objects accumulated in her moulded pieces for its part brings out, by means of re-emergence, the image of the vestiges of a colonial world dispersed in the great market of exotic items, where the exotic nature of time overlaps with that of space. Isabelle Cornaro thus seems to critically recycle the products of the actual decomposition of the history of Modernity. 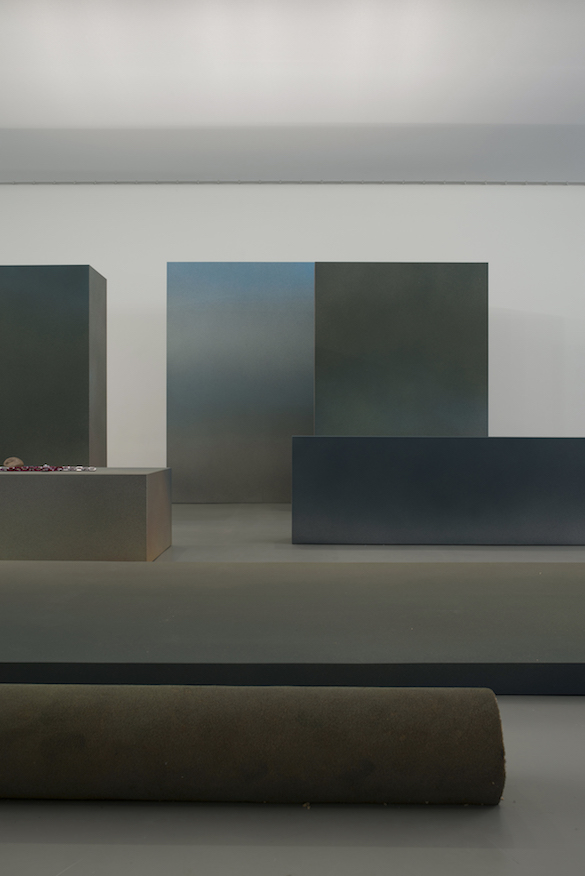 However, the undeniable seductiveness exercised by her works puts visitors in an ambiguous situation in their relation to them, flattering their petit-bourgeois taste while at the same time putting them back at the centre of a system of domination by the eye, visitors whom contemporary History and a multipolar globalization have swept away. So this latter may well try to thwart the artifices of the composition by shifting around within it, but it will still remain the prisoner of a closed field, a defined framework, the white cube as terminus of a Modernity which does not authorize alternative histories, and excludes peripheral ways of looking at things, but here returns as a ghost. So perhaps we should see in this veiled glass roof a sign of mourning in front of this perspective which comes to rest here in its vacillating majesty, dissolved in a paint that has returned to dust, and displayed by ghostly forms in what might constitute its majestic mausoleum.