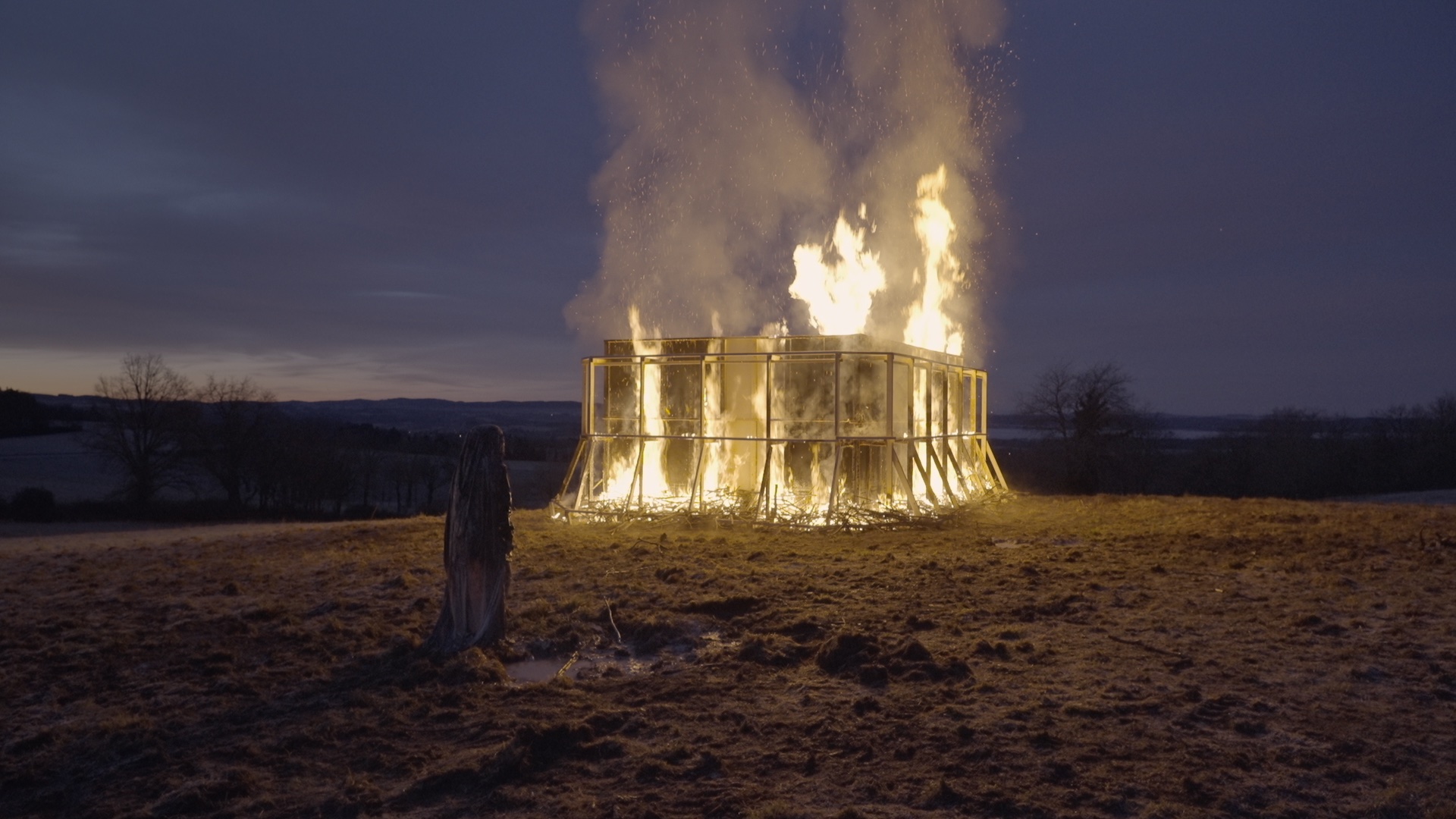 An axiom is a postulate. This utterance is such a given that it seems useless, or even impossible, to make a demonstration of it. The starting point of the Raphaël Siboni and Fabien Giraud exhibition “The Everted Capital (Katabasis)”, is one such demonstration: immediately upon entering the exhibition we are invited into a world in which the two artists have determined the rules. The pair manipulate a hypothetical universe which they have carefully crafted to transcend reality by integrating a multitude of theoretical, fictional, historical and scientific references.  Completely megalomaniacal, the project has a kind of divine mania to it. Due to its gargantuan scale, it required the participation of a multitude of institutional partners across the world, including the Museum of Old and New Art (MONA) in Australia, the Okoyama Art Summit in Japan, and the Casino in Luxembourg.

This is where the first season of this project was presented, over the course of two periods; in 2014 and then 2018—The Unmanned, a series of films which presented an alternative narrative about technology. The Everted Capital (Katabasis) groups the second and third seasons, and also debuts the third chapter presented at the Luxembourg institution. The second season hinges on the notion of value through a series of filmed performances, some of which last 24 hours. The third and last season groups together objects which populated the stories in the previous seasons.

The exhibition is therefore the “infinite prologue” to a 10-year cycle of work as well as to a veritable odyssey which situates itself somewhere between mythological tale, historical fresco and science fiction series. Mesmerised, we enter the Casino by what could be interpreted as a wrinkle in time: a tight passage, wedged between two walls and inhabited by natural and man-made objects presented in a full state of dissolution, immersed in a mineral mixture resembling salt. A slice of pomegranate, a Nike shoe sliced in two, or a sleeping bag, for example, sometimes encounters one of the immortal beings from the second season, and which are visible on the upper level. A real-life performer takes their place here, asleep on a makeshift mat. A camera set up on the sidelines bears witness to the scene. A spray of water streams continuously through the centre of the gap set up in the space, running from the attic to the basement of the building, symbolising the “catabase”: the descent into hell referenced by the subtitle of the exhibition. The ambiance is heavy, and we realise that we have entered into a kind of subterranean labyrinth in the aftermath of an apocalypse as opposed to what may have appeared to have been a world built upon the ashes of capitalism. It is cold and damp here, the air feels charged, asphyxiating. The artists have stated their wish to “develop an extraterrestrial relationship with our own world,” presenting humanity as an artefact, strange and alienating. This is the effect encountered.

Upstairs, we are confronted with a series of seemingly prehistoric rudimentary tools, arranged in a distinctly museum-like fashion, arranged on top of a lit display case. Here is the axiom of the third season, generated by artificial intelligence. The next section consists of videos of performances on which the second season (episodes one and two) is based, in which a chapter of the history of a community of immortal beings is told. In one of them, a deep-fake Richard Nixon with a Japanese accent announces over the television that a family of immortals has been taken hostage by a group of mortals. The event takes place in August, 1971, at the time of the taking apart of the Earth. 3,000 years later, the 82nd generation of hostage takers, haggard, recite a pre-written speech about the event, without really knowing the reasons behind it. By inserting humanity into a different space and time, the artists make room for commentary on its absurdity. In the centre, a platform collects the water which was seen in the entrance, washing over an ensemble of sculptures, before finishing its trajectory in a splash on the tile of the basement-level toilets. The works are invasive, gnawing away at the building they occupy.

With “The Everted Capital (Katabasis) Giraud and Siboni have created a singular meta-exhibition where reality and fiction continually confront one another, overlapping with one another. For example, the actress from episode three gives birth to the baby that we see at the age of four months, in a sculpture-bassinet placed within the exhibition. The exhibition space fuses with the space of the film, in a tangle of parallel, interdependent dimensions. The story has no end. The visit comes to an end in an empty space which will contain beginning mid-June, the resulting videos of the performances of the immortal beings filmed within the exhibition.

Giraud and Siboni’s dystopian fresco seems cruelly familiar. As we are well aware, science fiction knowingly resonates with the present. The climate change catastrophe looms in the background of a humanity condemned by its own actions, incapable of imagining an alternative to the model it created, and which it has also been devoured by. A slight hypnotism results from the many liters of water which splash continuously onto the floor, during which we may nevertheless wonder about the environmental impact of these types of exhibitions; overtly critical of the capitalist system founded upon extraction and accumulation though they may be, they nevertheless require enormous amounts of energy to produce. If we are looking at another meta-situation, then this one is rather cynical.