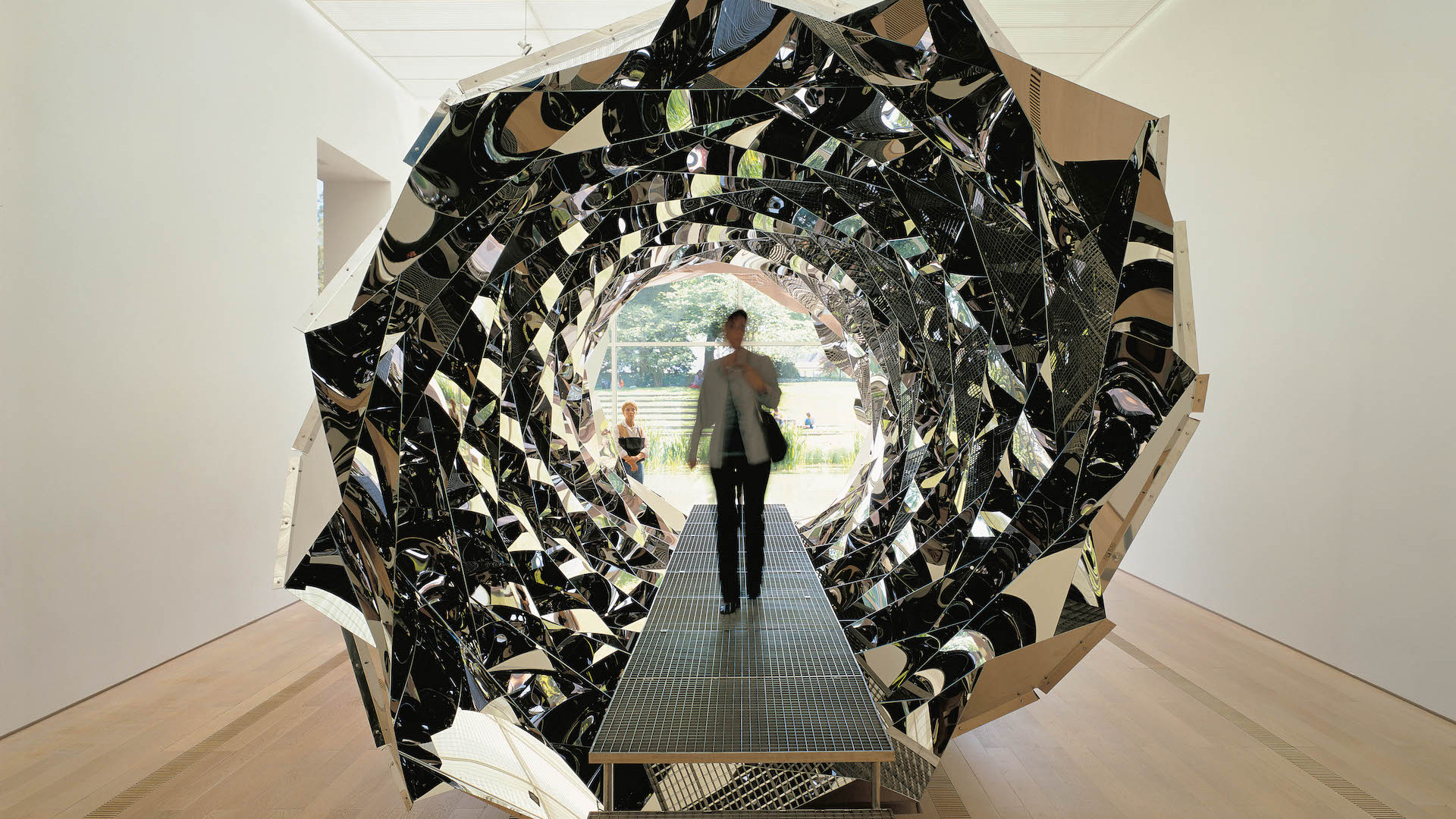 Olafur Eliasson is undoubtedly one of the planet’s ten most famous artists, and a regular presence in the world’s major institutions; rare, too, are the media which have not painted his portrait in several columns. For several years, like his colleague Tomás Saraceno, Eliasson has incarnated an artist deeply involved in his day and age and its issues, seeking in his work to familiarize the public with questions to do with the planet’s future, while boasting a tremendous capacity for formal innovation. This native Icelander represents a very real change in our perception of artists: not so very long ago, we tended to consider such people as gentle dreamers, with not a lot to say about serious things—the economy, transport, pollution, nuclear energy, climate change and the like—which were the domain reserved for engineers and experts. Artists were there to brighten our lives and embellish our sitting rooms (something they are still doing, incidentally). Alas, the atom produces tons of indestructible waste, the GAFAM corporations steal our data, car manufacturers lie to us about the toxicity of exhaust fumes, pesticide dealers poison our fields, and “mineral” water producers plunder our springs once every manner of water table has been contaminated by their predecessors…

All of a sudden, things are starting to shift the other way: it is no longer the multinational-serving expert who is coming up with the “truth”, but poets and artists who are now spreading “truths” which are every bit as reliable as the experts’ versions because, it just so happens, they make no claims either in terms of “truth” or in terms of “objectivity”. In this world which is in the hands of the multinationals and no longer run by sovereign peoples, information is filtered, rigged, and reduced to euphemisms so as to frighten the consumer. Who, right now, is capable of jostling consciences? Perhaps those artists who are broaching the issues of our time without too much moralizing, without alarmism and without resorting to spectacularism, which risks shifting their activities from the chord of appropriate attention to sensationalism, while remaining aware that they are bound to combine aesthetics with the non-literalness of the message. The path is a narrow one. Rare are those who manage to reconcile all these attempts by proposing a sexy art. Eliasson succeeds when he produces a series of photographs of Iceland’s glaciers which he knew as a boy, simply getting us to note, by way of a sober presentation, that these selfsame glaciers have now thawed, and when he takes blocks of ice into the middle of Paris (Ice Watch Paris, 2015), leaving them to vanish in the ambient warmth. Simple but effective; how to mark minds but without making consciences feel guilty. Everything is a matter of perception and reception: with Eliasson, this latter is quintessential; the artist is constantly trying to highlight phenomena to do with the work’s reception, and with (media) information, a little like an artist such as Gustav Metzger, with whom he shares the same concerns with things ecological. Light is the first and most important item of information: its transformation, its diffraction, and its diffusion lie at the heart of his praxis, ever since The Weather Project, a pivotal work which he presented in the middle of the Tate sixteen years ago, lighting up the Turbine hall with a miniature sun, already pinpointing the allpowerfulness of light, origin of all life on Earth, but indirectly responsible for the planet’s current excessive heat, if we reckon that the burning of fossil fuels is just the latest consequence of the reinstatement of solar energy in the atmosphere following the production of matter carbonated by photosynthesis.

If the 2019 exhibition—whose title “In Real Life” is already a kind of embryonic criticism of the significance of the so-called ‘social’ networks—does not achieve the power of The Weather Project, which will always be one of his most impactful installations, it has the merit of showing a multi-facetted œuvre drawing on all the disciplines of contemporary art, with the possible exception of performance, and one which is forever enlarging its area of investigation. Eliasson is interested in design and architecture and the exhibition opens with a showcase housing a host of maquettes—not only is he “interested” but his studio has built several very real pavilions—, but he is just as capable of radically renewing the aesthetics of a public fountain (Waterfall, 2018) as producing rechargeable solar lamps (Little Sun, 2012) or installing a mass of lichens and mosses which literally colonize one of the museum’s walls, a tactile and evolving “tableau vivant” which condenses all the artist’s concerns (Moss Wall, 1994). Like many artists of his generation and stature, Eliasson gathers nothing less than a think-tank around his person, forever looking for new projects, and, if we might reproach him for having become the boss of a small business and getting involved with branding, because of his reputation, all this remains quite trivial in terms of promotion, if we consider the impact which exhibitions like “The Weather Project can have”, with its two million visitors. One of the rare downsides that we can toss at “In Real Life”, but which is not the artist’s doing, is the fact that the exhibition lacks a little breathing space: some pieces would deserve larger exhibition areas, one such being the extraordinary Big Bang Fountain, which is squeezed into a cramped room, another that famous walk through a coloured fog (Din blinde passager, 2010), which is slightly skimpy, when one would like to get a bit more thoroughly lost in it, as in real life.